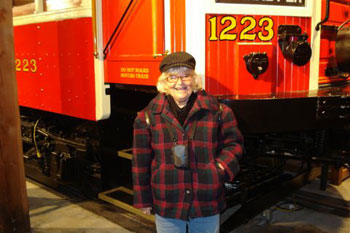 Warm Christmas cheer greeted me and made it a pleasant winter’s outing when I visited the Burnaby Heritage Museum. From the blazing coloured lights to the Victorian Christmas decorations I was quickly transported into the spirit of the holiday season.

The Village represents a heritage community along the old B.C. Electric Interurban Railway Line. A visit to the little heritage shops is always interesting and the docents will eagerly give you some background history. I particularly enjoy visiting the 1920’s General Store which for me is somewhat of a trip down memory lane to my early childhood on the prairies. Inside the Way Sang Yuen Wat Kee Chinese herbalist shop, red paper lanterns are strung up for the holiday season. In the print shop, the docent is giving a group of school children a demonstration of old printing presses. In the Interurban Tram barn you can visit one of the restored trams. They ran until the late ‘50s, and I can recall riding the tram home from high school, barrelling down First Avenue with the floorboard clattering, on its route to New Westminster. 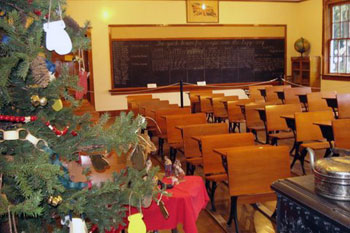 There are various ongoing events throughout the season including a theatre where you can watch old silent films, a blacksmith demonstration, carolers, a Christmas scavenger hunt, rug hooking demonstrations, children’s crafts and even a visit from Father Christmas. When you arrive at the ticket office, they’ll give you the day’s scheduled events and the location of where you can see them.

The 1911 home of bachelor Tom Irvine features the kinds of simple Christmas decorations of the past. Inside the old school room, a docent representing a turn-of-the-century teacher lectured a group of visiting school children exactly as if they were students of that era. What a surprise when she made them all line up and show their hands to make sure they were clean, just like they used to do in old school rooms! 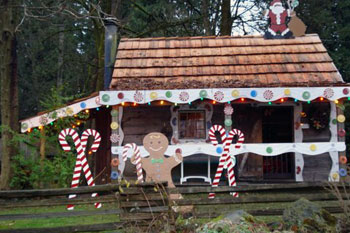 At the Elworth house it’s Christmas eve at the 1922 home of the Bateman family. It gives you a real sense of stepping back into the past. There’s also a replica of a log house decorated to resemble a gingerbread house, straight out of Hansel and Gretel (there’s no witch inside, though). Traditional Christmas decorations including a tree decorated with handmade ornaments are displayed in the Jesse Love farm house (circa 1893). And there’s a group of mannequin carolers in period costume in the living room ready to sing in a caroling diorama. In one of the bedrooms the bed is covered with a hand-made quilt demonstration the quilting skills of women in those days. 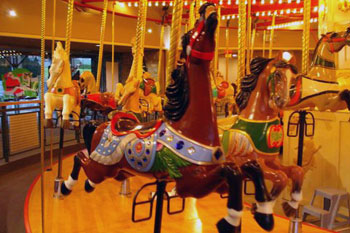 A ride on the vintage C.W. Parker Carousel is a must no matter what age you are. This is my one of my favourite activities at the Museum. The carousel originally operated at the PNE for many years and I remember riding it when I was a youngster. It was later restored, with each pony or sled carefully painted and repaired by donations from various people or organizations. Ride on the beautiful prancing horses, accompanied by the tunes of an original Wurlitzer organ. Great fun! At the gift shop next door you can buy those last minute trinkets to fill the Christmas stockings. 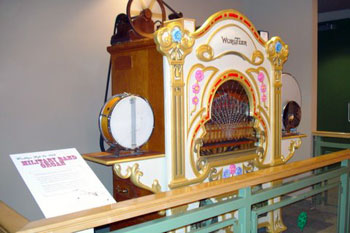 There’s lots to see at the Heritage Village, with hirty-two displays as well as the scheduled events. The afternoon I visited, a musical duo from Guatemala was playing “Feliz Navidad” and other seasonal songs inside the little church. After my tour I refreshed myself at the ice cream parlour with some lemon cake and a hot cup of cocoa. They also provide full meal service.

This is the Museum’s 40th Anniversary so if you’re in the vicinity, be sure to stop in to spend a pleasant afternoon or evening enjoying a heritage Christmas. Bring the kids, or come by yourself and relive some of your childhood!

About the author:
W. Ruth Kozak always enjoys a trip down memory lane. She tries to visit the Burnaby Heritage Museum a couple of times a year, especially at Christmas. Ruth write historical fiction as well as travel and memoirs and instructs various writing classes in Vancouver. Visit www.ruthkozak.com 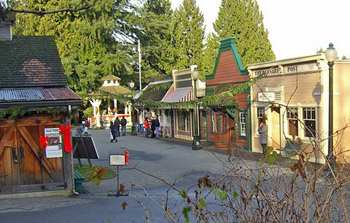 Every December, Burnaby Heritage Village in Burnaby, B.C. Canada reopens for its heritage holiday schedule. Festively dressing up and entertaining guests with special activities, it’s an opportunity for visitors to rediscover the true meaning of Christmas. 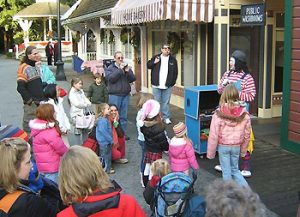 Entering this charming 1920’s village, families cross a bridge above a murmuring creek and step back to a simpler era. The narrow roadway curves upward between an old schoolhouse and a tiny cabin. Just below sits a high peaked church, where a children’s choir practices melodic carols.

Opening the door of Seaforth School we feel like new students as the plainly clad school-marm sternly teaches all grades, all subjects. Evidently she’s directed her class to adorn this one-room school with classic handmade decorations, making it very Christmassy!

A plaque posted on the two-room log home tells us that Tom Irving and Bob Moore first built this house near Burnaby Lake. Tom prospected in the Yukon and later helped build BC’s early tram line, represented nearby in a barn sheltering a beautifully restored 1923 interurban tramcar and model toy train diorama. Tom never married and died in 1964 at the age of 100. Like most of the thirty structures there, this cabin’s interior, dons early Christmas trimmings. 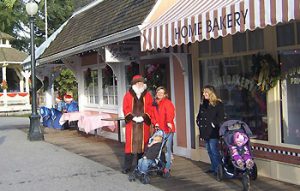 Red-ribbon bows and greenery decorates the corner bandstand and drapes over the village’s main street. Spotting Father Christmas, we follow him into the Village studio to snap a few photos of this Yuletide hero. The bewhiskered chap proudly tells us, “You’ll notice I’m not dressed in red and white like today’s chubby elf. Coca-Cola created him in their 1931 ad campaign. My long, brown fur-trimmed robe and cap represent apparel of that fourth-century gift giver and famed Turk, Saint Nicholas.”

Peering through Burnaby Lake General Store’s windows, we see a bygone wish list and examples of popular toys of that era. And outside the soda fountain, a brass band plays familiar Christmas melodies. Listeners mingle with still costumed Footlight Theatre Company performers, who’d just staged a children’s tale in the cozy Village Theater. Inside the soda fountain, we sip cups of mulled cider. Exiting later, we watch a clown perform mirthful magic in front of the old-fashioned Home Bakery.

Weaving in and out of shops, we check out paper lanterns in the Chinese herbalist shop, pick up seasonal bookmarks at the print shop and admire little Union Jack flags ornamenting the Royal Bank’s fir tree. At the end of Main Street, a one-room cabin is decorated as a gingerbread house; a costumed gingerbread gal skips mischievously about, posing with visitors of all ages. 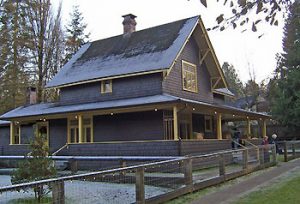 Remaining on its original site at the other end of town, the Bateman family home is authentically furnished with 1922 décor. This December, their home depicts “The Night Before Christmas,” an old red sleigh sits on the verandah and a large toy mouse sleeps in its spacious living room. Their garage was converted a few years ago into a playhouse stocked with vintage toys for ageless girls and boys.

A popular family attraction is the festively decorated C. W. Parker 1912 Carousel. There’s not enough time to take a spin, or hear the costumed carolers serenading visitors each evening. But, before departing we pop into the Love farmhouse. Simple decorations hint at this home’s jolly winter gatherings. The tweedy-suited interpreter reports, “The Loves were Burnaby’s first landowners. Building in 1893, they added this kitchen and living room in 1911. These rooms were important for big Christmas get-togethers, when Grandpa took the train from Vancouver, bringing a turkey, goose and his fiddle…”

And long may these merry celebrations continue! 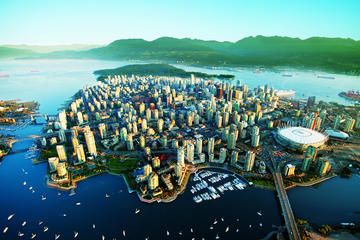 It’s easy for visitors to find. For drivers: it’s just off Trans-Canada Highway 1 at Exit 33 and left on Canada Way for one block to its colorfully quaint entrance on Deer Lake Avenue. For public transit users: take Bus 144, 123, or 129.

Check out the Burnaby Village Museum website to learn about seasonal schedules, special events and programs. 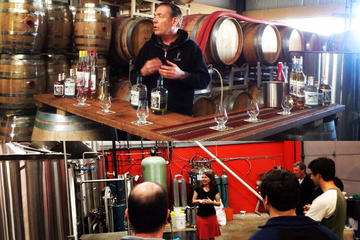 About the authors:
Much-traveled freelance writer/photographer team, Chris and hubby Rick Millikan reside near Vancouver, BC. Former educators, they now present travel as an inviting ‘curriculum’, globe trotting in search of historic, cultural and zany adventures, their accounts appear in many BC Newspapers, local magazines, in-flight magazines and occasionally the Vancouver Sun or Province.

Photo credits:
All photos are by Rick and Chris Millikan.