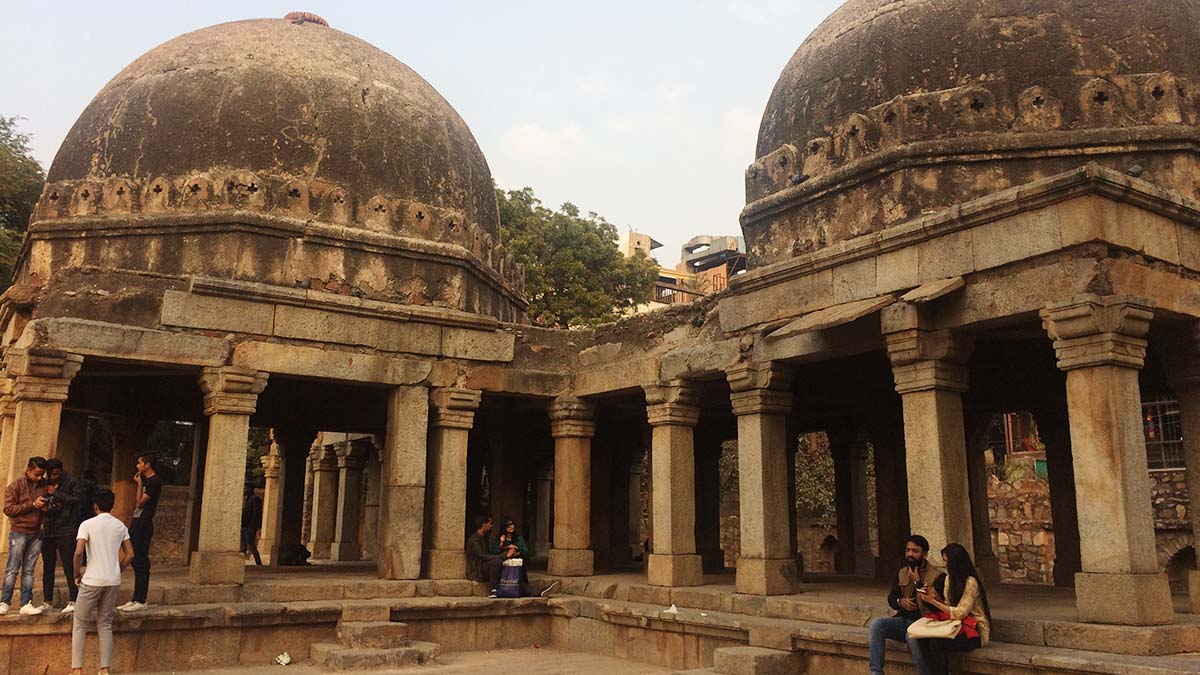 New Delhi, the capital of India, or Delhi as it is more popularly known, belongs to that pantheon of world cities that have a continuous history of a thousand years and more. The first time that we hear of Delhi is in the epic Mahabharata where it is mentioned as Indraprastha. In the ancient Indian period, Delhi remained a Hindu kingdom but not many structures from those periods have survived to the modern times. The record and coverage of this extensive history truly began with the arrival of the Delhi Sultanate in the 12th century. The Delhi Sultanate had five dynasties that ruled successively. The first four were of Turkic origin and were the Mamluk Dynasty (1206-90), the Khilji Dynasty (1290-1320), the Tughlaq Dynasty (1320-1414) and the Sayyid Dynasty (1414-51). These were followed by the Afghan Lodi Dynasty (1451-1526). 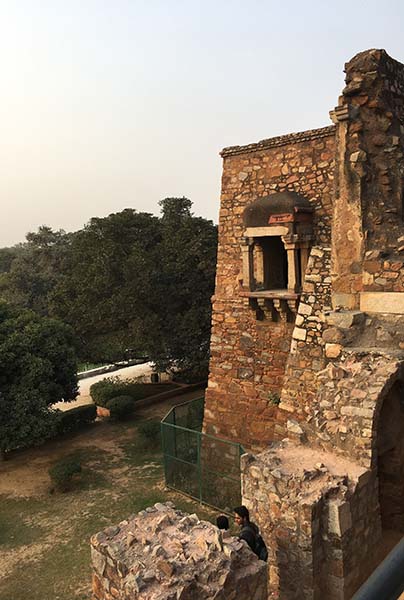 On our recent annual trip, my family and I decided to visit some of the oldest monuments in Delhi. We started at the Hauz Khas Complex, a set of monuments built during the reigns of Allauddin Khilji (1296-1316) and Feroz Shah Tughlaq (1351-1388). The area around the complex is where Khilji, considered one of the most powerful rulers of the Delhi Sultanate, set up his capital of Siri. This would be the third of the seven cities of medieval Delhi. It contains an Islamic seminary or madrasa, the tomb of Feroz Shah Tughlaq, a mosque, six domed pavilions and a water tank or Hauz Khas, meaning literally Royal Tank.

The tank was excavated during Khilji’s reign to meet the water demands of the growing population of Siri. It was used to collect water during the rainy season and then distributed to the people of the city. Originally known as Hauz-i-Alai, it fell into disrepair after the end of Alauddin Khilji’s rule and was cleaned and re-dug by Feroz Shah Tughlaq of the following dynasty. Although later on the reservoir went dry and remained so for centuries, recently the whole complex was renovated. Today the tank has again been refilled with water and the entire complex has been enhanced and preserved. 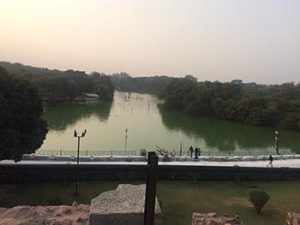 The cluster of buildings around the tank was added by Feroz Shah Tughlaq who built the Madrasa-e-Feroz Shahi in 1352, the Islamic school considered to be the largest in the world of that era, around the edge of the tank. The building is a two storied L-shaped continuous structure, stark and austere in the Tughlaq tradition and while today it is mostly in ruins, it was very easy to imagine it as being filled with students learning in its grand rooms. On this cold January evening, the area was jam-packed with visitors, young and old, tourists, locals, school and college going kids, all enjoying the warmth of the late sunlight. We too decided to sit down for a while, surrounded by people, and enjoyed the newly landscaped vista of trees and pathways around the tank.

To our front was the lake, surrounded by greenery, the shimmering sun ready to set over it and to our side were the domed pavilions, glowing in the light of the early evening, perhaps the tombs of the teachers at the madrasa. No one really knows for sure. At the junction of the two wings of the seminary, stood the tomb of Feroz Shah Tughlaq himself, a square mausoleum with a high dome. It is unusual because it has all the elements of Buddhist, Hindu and Islamic architecture.

The notorious Turkic invader Timur, also known as Tamerlane, who raided Delhi in 1398 to wage a holy war, set up camp in Hauz Khas. It is interesting to note that while he ransacked the riches of Delhi, he documented the Hauz Khas monuments in his memoirs. “When I reached its gates, I carefully reconnoitered its towers and walls, and then returned to the side of the Hauz-i Khas, a reservoir constructed by Sultan Firoz Shah, and faced all around with stone and cement. Each side of this reservoir is more than a bow-shot long, and buildings are placed around it. It is filled by the rains in the rainy season and supplies the people of the city with water throughout the year. The tomb of Sultan Firoz Shah stands on its bank,” wrote Timur in Turkish which was translated into Persian nearly two centuries after his death in 1405.

At the Qutb Minar Complex, we entered an even older world. The construction of Qutb Minar, a red and buff sandstone tower, was begun by Qutbu’d-Din Aibak in 1199 CE. Aibak was the founder of the Mamluk dynasty, also known as the Slave dynasty. He was a slave of Mohammad Ghori, a sultan of the Ghurid Empire whose reign spread from modern day Afghanistan to the eastern parts of India. Ghori returned back to Khorasan in Afghanistan after conquering Delhi and left Qutbu’d-Din Aibak as his military commander. And thus he became the first Sultan of Delhi.

The buildings in this complex laid the foundation for the beginning of the Indo-Islamic style of architecture, an assimilation of both the Indian Hindu and Islamic styles of art and building. But then again there was no specific standardization as the architectural styles would vary according to a particular region of India. This amalgamation came about because the Muslim rulers had no other option than to use the local artisans, sculptors and craftspeople who were set in their own styles and traditions. 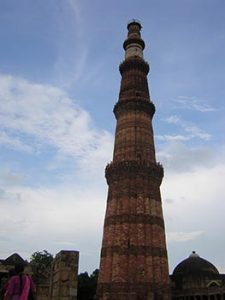 The Qutb Minar stands tall at 72.5 m (238 feet) and is the tallest brick minaret in the world. It is a fluted tower of alternating angular and circular sectors built for the muezzins for calls to prayer. There are five stories, each of which has a projecting balcony decorated with beautiful stone brackets. The surface of the minar (tower) has floral decorations and numerous carved inscriptions in Arabic which highlight its history. After Aibak built the first level in 1199 CE, three more levels were added by Sultan Iltutmish (1211-1236 CE), Aibak’s successor and son-in-law. As per the inscriptions, more repairs were done by Feroz Shah Tughlaq of the Tughlaq dynasty and Sikander Lodi (1489-1517 CE) from the Lodi dynasty.

The day was bright and sunny when we entered the Qutb complex, a UNESCO World Heritage Site, designated so in 1993. Just like at Hauz Khas, here too inspite of the throngs of tourists and locals, and the cacophony of the Delhi traffic just outside the complex gates, one can immediately feel being transported to a different world. We craned our necks upwards to check out the Arabic calligraphy stunningly carved into the red sandstone facade of the tower. The Qutb Minar is a landmark in Delhi, being visible from way beyond the grounds of the complex. There are 379 steps in the interior to reach the top although entry inside has been banned for a long time. 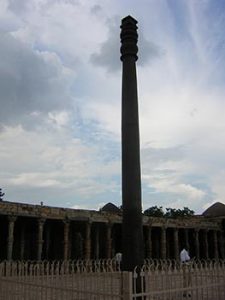 All around us were the remnants of a bygone era, even dating back to the Iron Age. There was the Iron Pillar of Delhi, from about 375 CE, with inscriptions that tell us it was built during the Gupta dynasty reign often known as the Golden Age in Indian history. The pillar, about 24 feet tall is made of 98% pure iron and still hasn’t shown much signs of rusting. According to some historians, the pillar, originally located in a Vishnu Temple complex in Udayagiri in the state of Madhya Pradesh in Central India was brought to this site by Aibak when he started the construction of the Quwwat-ul-Islam Mosque in 1198. The Brahmi inscriptions on the pillar, still preserved intact due to the corrosion resistant iron, show homage to a king named Chandra, whom historians have identified as Gupta King Chandragupta II from the late 4th century CE.

The pillar stands in the courtyard of the Quwwat-ul-Islam Mosque, the largest mosque from that era. The earliest surviving mosque built by the Delhi Sultans, it was also expanded later on by Sultan Iltutmish and then by Alauddin Khilji. It consists of a large courtyard with columns from Hindu and Jain temples that were destroyed by Qutbu’d-Din Aibak. We get to know this from the inscriptions on the main entrance. The Iron Pillar stands in the courtyard of the mosque. The other structures in the complex includes the Alai Minar, which was begun by Alauddin Khilji, who envisioned a tower taller than the Qutb. But construction after the first story was abandoned after Khilji’s death in 1316 and today it stands as a 24.5 meter high tower of rubble.

Nearby stands Alai Darwaza, which due to a crunch for time we were unable to explore. Built in 1311, by Alauddin Khilji, it was one of four planned gateways to the Quwwat-ul-Islam mosque except that this was the only one that got built as Khilji died in 1316. A massive gateway with inlaid marble decorations and latticed screens, it is again a superb example of Indo Islamic architectural style.

The Qutb complex has various other monuments like the tombs of Sultan Iltutmish, and Alauddin Khilji and also the ruins of a madrasa or Islamic seminary built by Khilji. One really needs an inordinate amount of time to explore this complex and the surrounding Mehrauli Archaeological Park in its entirety and regretfully we did not have that.

As the evening crept up on us, we left the complex promising ourselves to make a return trip on our next visit to Delhi. 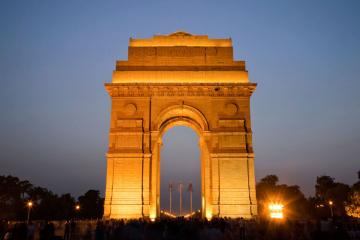 Visitors to the ruins can also check out the adjacent Deer Park, home to spotted deer, peacocks, rabbits and local and migratory birds in a beautifully landscaped park. The ruins are set amidst a residential and commercial complex known as Hauz Khas Village which as of itself is a major tourist attraction. A real village that was transformed when a fashion designer opened a boutique here decades ago, the place is now chock full of trendy stores, restaurants, cafes and art galleries all existing cheek by jowl on winding, crumbling streets festooned with a jumble of electric wires hanging overhead.

Qutb Minar Complex is again easily accessible by all modes of transportation. The closest metro station is Qutb Minar also on the Yellow Line.

While we made these trips in hired cars, taxis, auto rickshaws and cycle rickshaws are available outside all metro stations and can be used to reach the destinations.