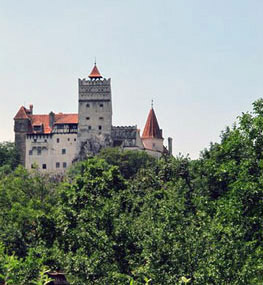 I have long been intrigued by Romanian’s mysterious folklore. Images flash through my mind of free-spirited Roma (gypsies) moving across the countryside, gifted with musical abilities and with psychic powers to tell fortunes or bring on a curse. The very word Transylvania sends a shiver down my spine, and blood curdling images of haunted castles and fanged creatures. My husband Rick and I are ready to find the historical threads in the folklore, keeping in mind a quote by Napoleon Bonaparte – “History is the version of past events that people have decided to agree upon.” 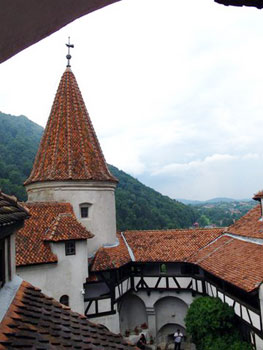 After a few days of checking out the architecture in the bustling capital Bucharest, we board a train for Transylvania – one of the largest and most picturesque regions in the centre of Romania known for its historical mix of flavours of the old Austro-Hungarian Empire, Saxons and brief Ottoman rule.

We are soon passing farmlands, forested areas, villages and towns. Along the route are numerous derelict manufacturing plants from the Communist Era, once producing product for the world market. Between verdant foothills of the southern Carpathian Mountains, we arrive in the medieval town of Brasov.

On our first walk down Str Republicii I am enthralled by the lively and colourful atmosphere. Sidewalk cafés run down the middle of this wide pedestrian-only promenade. Seeing “Possibly the Best City in the World” written on the café umbrellas makes me chuckle as I muse “perhaps it is”. But without question this charming city flaunts the narrowest street in all of Europe. Rope Street (Strad Sforil), dating back to the 18th century, is just over a metre wide and can be walked along touching both sides. 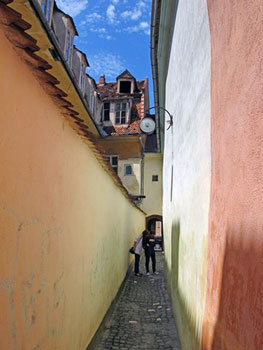 The Black Church (Biserica Neagra) towers in its dusky beauty in Council Square. Called St. Mary’s from the time the first stone was laid in 1385, until it was renamed in 1689 after its walls were blackened by the “Great Fire” that levelled most of the town. Five richly decorated portals grace the outside. On the inside over 100 Persian rugs are hung from the walls (given to the church by Saxon merchants returning from shopping-sprees to Ottoman lands). In 1839 a 4000-pipe organ was installed. It is a thrill to hear it being played; its thunderous chords setting off tremors in the air waves.

Of this once walled city, sections of the 2-metre thick walls remain, as well as a citadel, bastion and two watchtowers. Our climb up the 200 spiralling steps of the 15th century White Tower is rewarded with a panoramic view of the city,

We strike a deal with a taxi owner, Maxim, for a half day to Bran Castle and Rasov Fortress, both built during the Austro-Hungarian rule and dating back to the 14th century. It is spine-tingling to catch our first glimpse of the looming russet-roofed, white-walled citadels and towers of Bran Castle jutting from the side of a cliff. We leave Maxim to chat with other taxi cronies in the parking lot and start up the winding path towards the castle. The light sprinkle of rain turns into soaking wind-driven splatters half way up, which only serves to enhance the tale of this being Dracula’s castle in Bram Stoker’s 1887 novel.

A room in the castle is set aside as the “Bram Stoker Room”, with a wealth of information on the fame Stoker’s book brought to the castle, and how his fictitious Dracula may have been inspired by the historical figure Count Vlad III Dracula (a.k.a Vlad Tepes, a.k.a. Count Dracula). 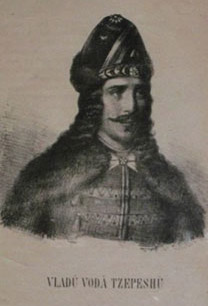 Vlad III was the ruling prince of the Romanian state of Walachia from 1456-62, and from 1476-77, who offered a strong resistance to the westward expansion by the Ottoman Turks. His moniker Dracula was inherited; it means “son of the dragon” after his father Vlad II Dracul, who was a knight in the Order of the Dragon established to protect Christianity in the land. The symbol of this medieval order was a dragon, or “dracul” which at the time had a positive import, but after the 5th century became a symbol for the Devil. Vlad III’s infamy and his acquired moniker “Tepes” or Impaler, arose from his inhumane method of dealing with his enemies; foreign invaders and also rebellious countrymen, including noblemen (along with their families) who he felt were traitors and conspirators in the death of his father and brother. It is said dozens at one time were skewered on a wooden stakes in such a manner that instead of instant death, the victims suffered excruciating pain for up to 48 hours before their earthly farewell. It is believed that Vlad Tepes never set foot in Bran Castle….but there is a historic mention of his troops passing through Bran in 1459, and if going along on military manoeuvres was the Count’s modus operandi…who knows? 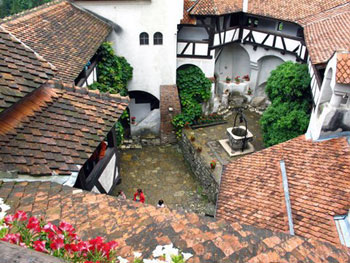 Built in 1377 it was mainly a fortress over the centuries to protect Romanian borders. In the early 20th century the town of Brasov gave the castle to Queen Marie of Romania. She absolutely loved each of its 57 rooms and she made it a summer retreat for her family of six children and King Ferdinand, when he wasn’t called away with kingly duties. She hired Czech architect, Karel Liman who imparted the castle with its romantic appeal and added to the comfort with heating stoves of Saxon tile, running water, electricity, three telephones and an elevator. 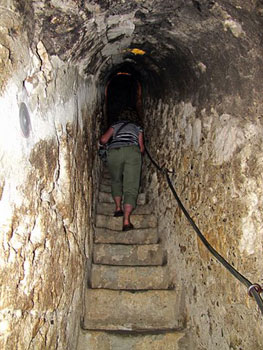 We make our way up creaky wooden staircases, through narrow passage carved into the rock, and in and out of the high-ceilinged rooms, several of which overlook the courtyard dotted with potted red geraniums to enliven the castle’s sombre tones. Queen Marie’s bedroom and study are restored with ornate hand-carved furnishings, but not in the least opulent. The combined music room and library converted from an old attic is the largest room, and is as cozy as this stone edifice can be with a fireplace, a bear-hide rug and padded furniture.

A secret passage connects the first and third level with access to a turret with a 360-degree view. Half way up the well-worn stone steps I feel a cold draft on the back of my neck. When there seems to be no logical explanation my unease heightens, along with thoughts of how many escalated this eerie passage over the centuries, and for what purpose?

Princess Ileana, whose fondness for Bran matched her mothers, remained in possession of the castle from the time of the Queen’s death in 1938, until the Communists evicted her in 1947. The castle was opened as a museum under the Romanian State in 1957, and in 2000 it was given back to Ileana as a company run museum. 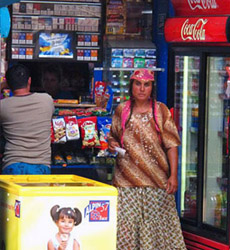 It is then on to Rasov, well at least to the bottom of the hill where it is perched, as the fortress was closed to renovations. Leaving the town of Rasov, Maxim points and says, “Gypsies”. We pass a rickety canvas-covered wagon pulled by two hefty steeds. A swarthy young man in a wide-brimmed hat jiggles the reins from the driver’s seat. His dark good looks are matched in the gypsy woman we later encounter. Alas, the romanticised lore of the Roma being free-spirited nomads is far from true – strong-spirited would be more fitting.

Historically the Roma people, believed to have originated from the Indian Sub-Continent in the 14th century, were subjected to slavery until the mid-1800’s, and were considered racially inferior by the Nazis and were rounded up for death camps until 1945. Today the Roma are the second largest minority group in Romania (after Hungarians) and number a little over 500,000 (of Romania’s total population of 22 million or 2.5% of the population – 2002 census), with some unofficial estimates much higher. They have kept their language, music and customs and have assimilated into Romanian culture in varying degrees, but in general they live in depressed settlements, and on the fringe of Romanian society.

Romania was for us a wonderful commingling of past and present, history and myth all wrapped into one pleasurable experience. Our small dint in the sights to see and our brief immersion in the culture left us wanting more – and a resolve that for us there will be a next time in beautiful Romania.

More Things to Do in Romania:
♦ Bucharest – seek out the fascinating mix of architecture from Romania’s elegant past & grandiose Communist era. Around Bucharest – visit the tomb of the infamous Vald Tepes
♦ Walachia (Wallachia) – the heart of Roma culture and beautiful monasteries
♦ Transylvania – some of Romania’s best skiing and hiking in the Bucegi Mountains. Also, visit the city of Sighisoara – the birthplace of Vlad Tepes, and the village of Sinaia to see Sinaia Monastery and Peles Castle
♦ Carpathian Mountain National Parks – pick a park to suit your interest: birding, flora, fauna, caving, hiking, skiing.
♦ Black Sea Resorts – find a hide-a-way along the 45 miles of sandy beaches, and view the remnants of ancient Greek culture.

About the author:
Irene Butler is an award winning travel journalist and author of “Trekking the Globe with Mostly Gentle Footsteps”. Her articles have appeared in national and international magazines, newspapers and E-zines. She and her husband Rick explore the world for six months of every year. www.globaltrekkers.ca

All photographs are by Rick Butler.