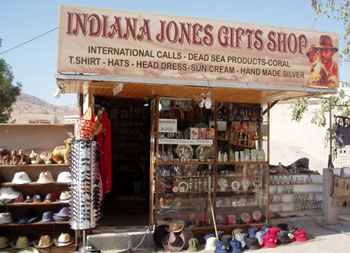 When I came upon the Indiana Jones gift and coffee shops and the Titanic Coffee Shop situated at the entrance to Petra, I got the giggles. Looks like some folks might want to make a buck out of Jordan’s #1 tourist attraction. After passing by a slew of guide trying to “assist” the tourists, I set off on a sandy path. Soon we passed what would be the first of many tombs to come.

After I turned the corner, I felt Lilliputian standing below a row of 400- to 650-foot ragged sandstone mountains. I walked between two massive rocks via the Siq, a narrow gorge filled with natural ravines and fissures. Everywhere I turned along this approximately half-mile path, Mother Nature or an earthborn artisan had carved a sculpture, water channel, shrine to some deity, or some other design into the stone. 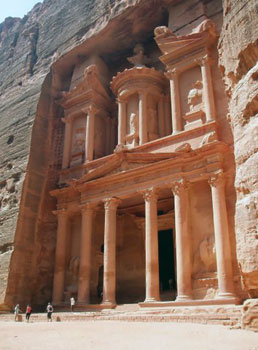 Out of the corner of my eye I caught a peek of al-Khazneh (the Treasury). With each step, the Treasury came closer and closer until finally I stood in front of this royal tomb carved into the rock. Built sometime between 100 BCE and 200 CE, the tomb got its name from the legend that pirates hid their treasure in a giant stone urn. Bullet holes on the urn indicate that the Bedouins believed this myth and made numerous attempts to retrieve this booty.

Continuing the sandy path, we approached an eight-thousand-seat Roman amphitheater surrounded by a burial bonanza. Local Bedouins used to occupy the caves we spotted off in the distance. The government outlawed this practice in 1984 out of a concern to preserve the monuments. The Bedouins resettled nearby, though as a compromise of sorts, they’re the only merchants allowed to conduct commerce inside the walls of Petra. 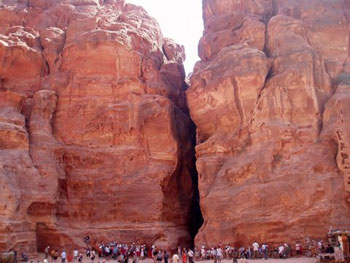 After lunch, I rode up to al-Deir (the Monastery) on donkeys. The thought of climbing up eight hundred steep steps as the temperature hovered near 100 degrees didn’t sound appealing. Horses and camels balk at this almost vertical climb, but donkeys can do it. As the path narrowed and steepened, my stomach felt a bit like it did the first time I rode the Coney Island Cyclone. Still, my donkey never missed a step, stopping only to relieve himself. (My sympathy for those who chose to walk to the monastery, because the path was littered with donkey dung.)

Once our donkeys crossed over the final step, I dismounted and walked up a small hill toward this craggy unfinished edifice. Slowly I walked up a short dusty path. Since there were no guardrails at the mountain’s edge, I carefully approached the crest. With each step, purple peaks winked at me as though they’re daring me to venture into God’s playpen, a spectacle of nature so vast that the Grand Canyon seems like a watering hole in comparison. As stunning as the man-made Treasury and Monastery might be (and they are truly magnificent wonders of the world), nothing can surpass the beauty of nature’s own artistic endeavors. 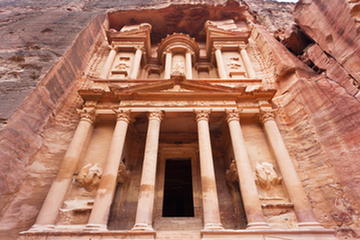 One Day Tour To Petra From Amman

About the author:
Becky Garrison is a freelance writer who has authored six books with a seventh book in development. In addition to penning a book on pilgrimages for Zondervan (a subsidiary of Harper Collins), she has written articles about destination travel and travel products for several publications, including 52 Perfect Days, Yahoo, Sportsology.net and Killing the Buddha. about.me/BeckyGarrison These reflections were excerpted from Jesus Died for This? (www.amazon.com/Jesus-Died-This-Religious-ebook)

All photos are by Becky Garrison.