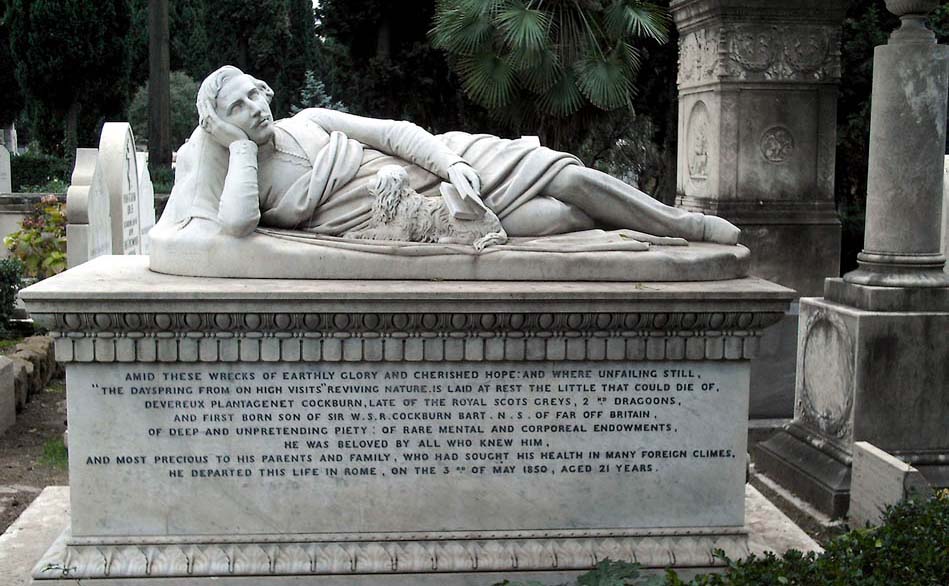 The sun stopped shining and the rain came in, as if it knew where I was going – past the Palatine Hill and the Coliseum to the subway, which would take me to Piramide station in the un-touristed south of the city – Rome, that is. The station is named for the nearby Pyramid of Cestius, built in 18-12 B.C. as a tomb for a forgotten local magistrate, a piece of folly that marks the entrance to far more hallowed ground. 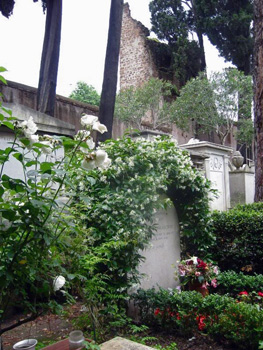 Perhaps Italians might disagree with me when I use this term, since this, the Cimitero Acattolico, is the last resting place for those who could not, or would not be buried in the traditional Catholic cemeteries here in the heart of Roman Catholicism. But hallowed it is, nonetheless, since this patch of land, overgrown with weeds and flowers, contains the remains of the some of the most important figures of the last few centuries: local dissidents and those from other lands, ex-pats, writers, revolutionaries, atheists and Jews who, famous or not, all came to rest together here in this painfully beautiful monument to non-conformity. Antonio Gramsci, Gregory Corso, and a cat named Romeo are some among this motley crew, though none of them hold higher places in the echelons of artistic memory than the two greats of English Romanticism buried here: John Keats and Percy Bysshe Shelley. How could it not be raining, then? It was as if the luminous Roman sky had been replaced for a moment by a melancholy English one, pausing to weep a bit for two lost sons, entombed amidst the ruins, far far away. 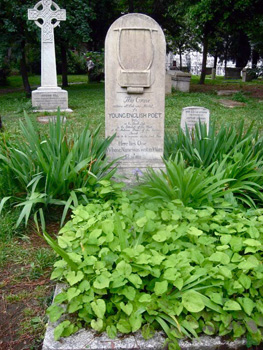 Though their names are often intertwined, John Keats and Percy Shelley came to Italy for very different reasons. Shelley, the rebellious Etonian from an Aristocratic family, was leading a wild life, one easier experienced abroad. He was best friends with Lord Byron and romantically entangled with Mary Wollstonecraft Godwin (turned Shelley), the author of Frankenstein. His lifestyle, radical views, and writing had brought him not only fame, but also infamy. Like many writers and artists of his day, he was attracted to the warmth of the European south, to its classical pagan origins, and to that fact that he could live freely there, away from the scandals that plagued him in England. Keats, on the other hand, came to Italy to die.

Born in London of far more humble birth, Keats’ life had been plagued by poverty, the loss of his parents, unfulfilled sexual desires, and the death of his brother to tuberculosis. Unlike Shelley, who attended Oxford, Keats never had the opportunity to reap the benefits of the English academic establishment, never mind rebel against it. Instead, he apprenticed as an apothecary and then studied medicine at Guy’s Hospital, in the city’s unfashionable south. His desire to write, however, eventually drew him away from the medical path – though he never lived its consequences down. In an England where class meant everything, including who could or couldn’t be an artist, John Keats’ Cockney origins and practical training were simply too much for some critics to bear. Of Keats’ poem Endymion, John Gibson Lockhart wrote that “it is a better and a wiser thing to be a starved apothecary than a starved poet; so back to the shop Mr. John, back to plasters, pills, and ointment boxes.” 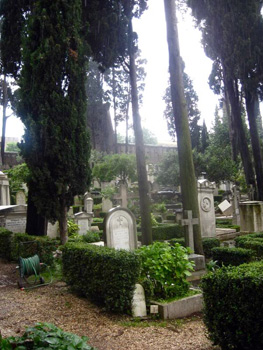 Besides the cruelty inherent in this statement, the irony was palpable too. Keats’ medical training, no matter how practical it may have been, could do nothing to stop what was then an almost incurable disease, tuberculosis. Not long after his brother died, it became clear that John Keats had contracted the illness too. Knowing that he would not survive the English winter, his friends gathered whatever money they could in order to send him to a gentler climate, a last ditch attempt to save his life.

John Keats sailed to Rome with his friend Joseph Severn in the autumn of 1820. The climate, however, proved not gentle enough, and the disease too strong. Within a few short months, Keats was dead, believing himself to be a failure. He asked to be buried in a grave bearing neither his name nor date of death, only the words “Here lies One Whose Name was writ in Water.” Those very words adorn his grave today, though his friends, in their belief that he should be recognized as a great poet, added some of their own.

Despite the critics, Keats’ close personal friends were not the only ones to defend him. He also had an advocate in the very man who now lies buried some twenty metres away. When Keats died, Percy Shelley wrote “I weep for Adonais – he is dead!”, the opening to his poem, Adonais, which was written as an elegy to Keats, and considered by some to be his best work. Shelley had met Keats through a mutual friend on a visit to Hampstead, admired his talents, and considered him to not only be a rival, but one who would surpass him. Not long after Keats’ death, Shelley went to visit his grave in the Cimitero Acottolico. Of the visit Shelley said “the cemetery is an open space among the ruins, covered in winter with violets and daisies. It might make one in love with death, to think that one should be buried in so sweet a place.” When I visited it myself, there in the broody mist, somber and romantic, I couldn’t help but agree with Shelley’s words. 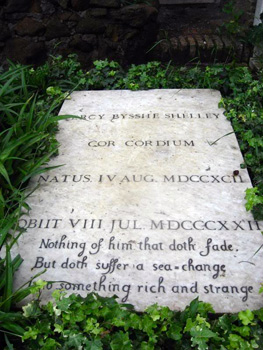 Shelley was buried in the same cemetery a mere year later, the victim of a violent Mediterranean storm that drowned him while sailing off the coast of northern Italy. A book of John Keats’ poetry was found in his pocket. Shelley’s cremated remains (all but his heart, which was kept by Mary Shelley and eventually buried in England) can be found under a small flat tombstone a short walk from Keats’, bearing the Latin “Cor Cordium” (heart of hearts), and a quote from Shakespeare’s The Tempest: “Nothing of him that doth fade, But doth suffer a sea-change is to something rich and strange.”

Visiting the Cimitero Acattolico is easy, though few Italians can tell you how to get there. Almost none I asked even knew it existed. It is free to enter, though donations are requested. There is a tiny visitors centre that sells books and postcards at the entrance, manned by staff who speak English, usually ex-pats themselves. Through the gate, Keats’s grave can be found by walking directly to the left, until you reach the first corner. A plaque written by his friends (complete with an acrostic based on his name) adorns the wall above it. A small bench lies in front, should you choose to sit and contemplate the great poet who believed his life’s work would make fewer impressions than ripples in a pond. 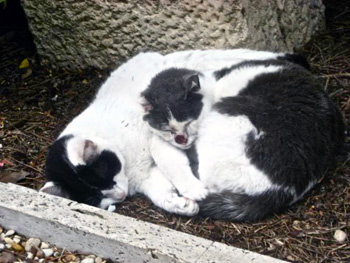 On my own visit, while I sat there overcome with tears, I heard a rustling from the wall above me. From out of one of the vines came a black and white cat, who jumped down onto the bench, and then snuggled up onto my lap. Through my own teary-eyed haze and quixotic imagination, it was easy to believe that in that moment I was being visited by the spirit of the poet himself. Of course, as I got up to walk to Shelley’s grave, straight ahead and to the right, I realised that the cat was just one among many strays who live in the cemetery, and to whose livelihood you can also donate money. However, the impression stayed with me, there on that wet rainy day, as I wandered alone through the grounds of the Cimitero Acattolico. And I emphasize the word “alone”, because visitors here are many fewer than in other famous cemeteries such as Père Lachaise or in Roman tourist spots like Saint Peter’s. When Oscar Wilde visited in 1877, he called it “the holiest place in Rome”. There, breaking bread with the dead, it’s not hard to see why. 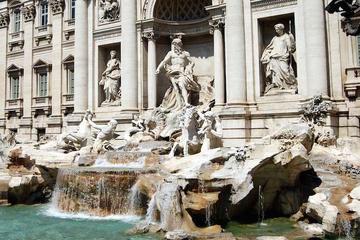 ♦ The Cimitero Acattolico can be easily reached from the Piramide metro station. It’s a few short blocks away, and can be accessed on Via Caio Cestio.
♦ The suggested minimum donation is €3.
♦ If you’re worried about getting hungry, visit the Jewish Ghetto before you hop on the metro, and pick up a taste of non-conformist Rome. Pasticceria Boccione Limentani sells delicious pizze, a fruit and nut filled bread – sweet, dense and perfect after a long walk. The bakery can be found at Via Portico D’Ottavia 1. 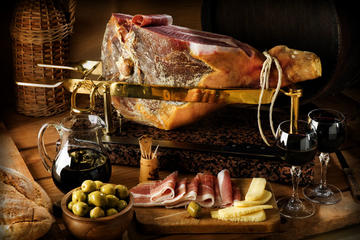 About the author:
Ellen Johnston is a cultural nomad —a traveller, writer and musician who bounces all over the world. Originally from Vancouver, Canada, she has West Coast roots, a Mediterranean soul and a Chilanga heart, thanks to a recent stint in the Mexican capital. She currently resides in the San Francisco Bay Area, trying to soak up a little of all three. You can find links to her other writing and photography at www.chamacaloca.wordpress.com

Photo credits:
Top photo of Cimitero Acattolico by LuciusCommons / Public domain
All other photos are by Ellen Johnston.