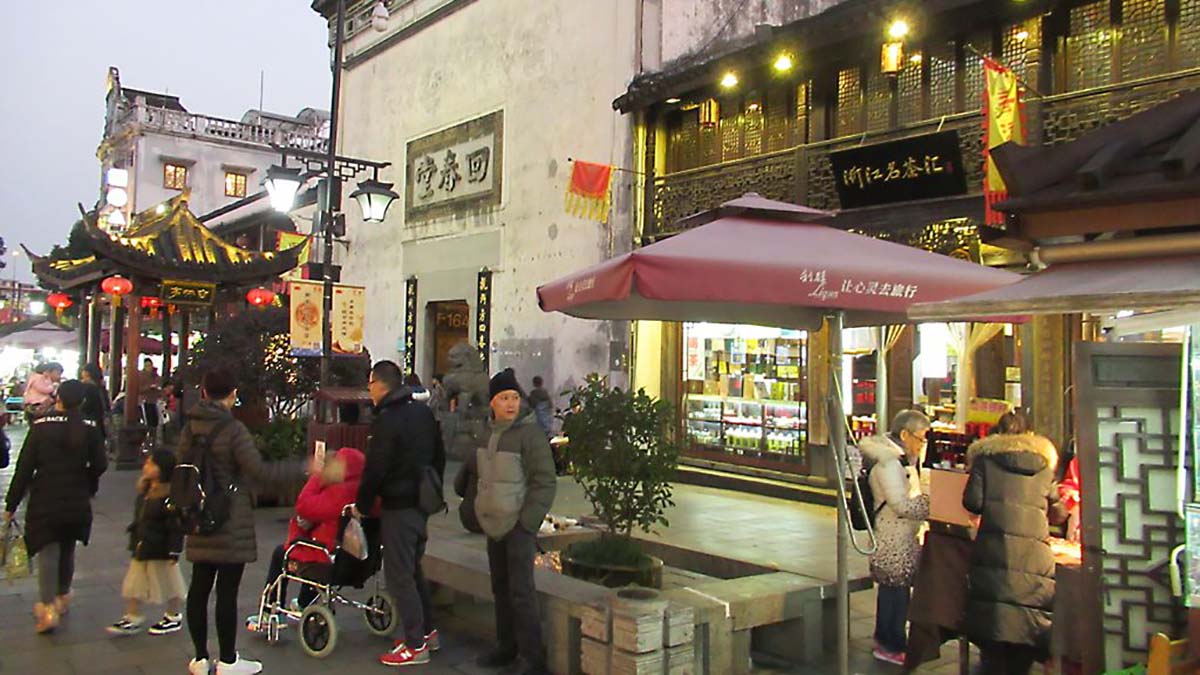 A whiff of spicy, fried dumplings and the hum of human voices tell me that I’m close to the downtown night market in Hangzhou, China. I turn a corner and witness swarms of people jostling around a vast array of merchandise strewn across ramshackle, wooden tables. The crowds continue down the road as far as I can see. Undeterred by the cold drizzle, buyers and sellers shriek at each other as they plead, beg, and bargain. Multi-coloured hanging lamps lend the place a surreal atmosphere.

It is the low season for tourism, so other than myself there are only a few westerners out this evening. Vendors beckon with cries of “Hello, hello!” and “CD, DVD!” They are relentless, thrusting cracked plates and crumbling vases in my face as they scream, “Ming Dynasty!” 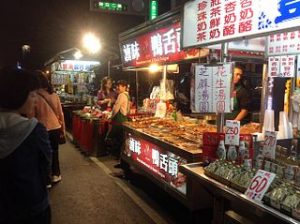 The downtown night market is the largest of several that appear every evening around Hangzhou, a city of six million situated about two hundred kilometers south of Shanghai. The stalls are loaded with enticing jumbles of collectibles along with the usual clothing, electronics, and houseware items found at other night markets. Pewter incense burners, ancient brass padlocks, and clunky old cameras compete with silk pyjamas, cooking utensils, and pirated CDs. None of it is really antique, but if you’re prepared to haggle you can pick up an unusual keepsake for the price of a dozen pot stickers.

I had ventured out that evening in search of two items: a birthday present for my sister and a wallet for myself.

After an hour of pushing and shoving among the chaotic stalls, I find what I seek: a pile of wallets crammed between a mound of padded bras and stacks of bootleg Austin Powers DVDs. I inspect a black leather model with a “Pierre Cardin” label. I’m pretty sure it’s a knockoff, but the quality looks decent.

“Best quality, best price,” a tall, willowy man croaks from across the table.

I coolly examine the wallet. Finally, I ask him the price. “Duo shao qian?”

He looks a bit surprised by my Chinese, but answers in English. “One hundred thirty renminbi.”

His asking price is twenty-five dollars. If I was a tourist I may have thought this was fair value. But I’m not a tourist. I’m a resident. I’ve recently begun a one-year stint as an ESL teacher. Earlier this evening my co-workers had warned me about the Chinese bartering system. They said that the price quoted to a foreigner is usually four times what is asked from a local. After several minutes of haggling the unsuspecting tourist negotiates a sum twenty percent lower and walks away thinking they have scored a bargain.

With this in mind, I retort, “ San shi kwai.” I’ve offered thirty renminbi, less than a quarter of what he’s asking.

“Ah!” he yelps, recoiling like I’d kicked him in the crotch. He folds his arms and mutters something unintelligible.

He makes a game effort to look offended. His lower lip trembles. He throws an old pocket watch and some fridge magnets on the table in front of me. “These thirty kwai,” he snorts.

It’s my turn to be indignant. I slam the wallet on the table, shake my head, and then walk away.

I’ve gone no more than twenty feet when I feel a tap on my shoulder.

“Okay. Thirty kwai, no problem.” He smiles and nods, as if our previous conversation had been a big misunderstanding.

I return to the stall and pay for my wallet. As I count out three faded ten renminbi notes I can’t resist feeling proud. I’ve stood my ground and won. And I’ve picked up a genuinely fake Pierre Cardin wallet for five bucks. 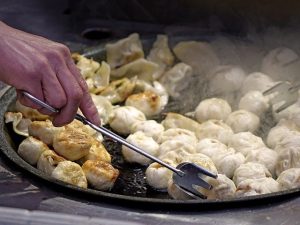 Buoyed by my shopping triumph, I pick up a bag of steamed pork dumplings from a street vendor and move on in search of something for my sister. A nearby stall looks intriguing. Amongst the clutter of goods are rusty tobacco boxes, wooden statues of goddesses, and worn ivory chopsticks. It looks like the vendor, a squat, older man, has cleaned out the family chest and put the best – or maybe this is the worst of it – up for sale.

At second glance I realize that he isn’t overweight. His clothes make him look that way. Everything he wears – his frayed turtleneck sweater, his stained, blue jacket, even his sneakers – are too large for his slight frame. With his wide grin and wire-rimmed glasses he looks like the Dalai Lama.

He nods anxiously. His manner is less aggressive than the other hawkers but none of his merchandise appeals to me. I shrug and walk away, disappointed that I can’t do business with this precocious little man.

To my surprise he runs after me, touches my arm, and then scampers over to the alleyway entrance behind his stall. He turns and motions for me to follow. “Come, please!” he pleads, “Come, look! No problem!”

At first I wonder if he’s trying to lead me into an ambush, where his friends are waiting to rob me. I decide he’s too affable for something so sinister. 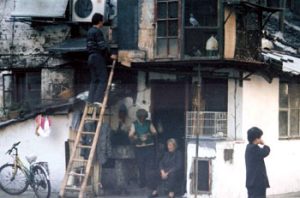 Maybe I’m being enticed into a smoke-filled opium den where Chinese drug lords play Mahjong and sexy Chinese girls wear qi paos – satin dresses with slits up the side. My curiosity gets the better of me. I follow him into the murky alley.

He scurries a few feet ahead, looking back every few seconds. Overflowing, stinking garbage cans line the alley walls. A rat darts from behind one, nearly touching my shoe. It starts to rain harder.

We come to a rotting, wooden door. My guide raps on it and hisses something through a narrow crack. A female-sounding voice answers shrilly. The door opens with a creak. He turns and motions for me to enter.

I step inside a small, musty room. The temperature is scarcely warmer than it is outside. A dim light bulb hangs from the center of the ceiling. A rickety table and chairs serve as the only furniture.

In a second room an old woman crouches over a hotplate. A cigarette dangles from her mouth. I recognize the pungent smell and sound of sizzling pork. She pays us no attention. Tinny-sounding music screeches from an unseen radio.

My host (who tells me his name is Mister Lu) brings a tiny, cardboard box from the other room and places it on the table. He opens it carefully, producing an object wrapped in old, yellowed newspaper. I can see his breath as he removes the paper to reveal a small, cracked vase decorated in blue Chinese characters. He offers me the vase. “Ming dynasty,” he whispers.

I grasp it cautiously, turning it over several times. The cracks extend over its surface; their uniformity suggests they were part of the original design, but whether they were made intentionally or not they add to its allure. I have no idea as to its age but I doubt that it’s Ming dynasty. Whatever it’s origin, it is indeed a thing of beauty.

I return the vase to the table. “Duo shao qian?” I inquire.

I laugh. I have no idea what the vase is worth but I know that his first price will be nowhere near his best.

He twitters like a shy schoolgirl. “Sorry, sorry. Two thousand Chinese money.” He has dropped his price by eighty percent.

I pick up the vase and feign another inspection while I consider my options. If this is an elaborate ruse that he stages nightly he has gone to a great deal of trouble. It’s possible that he really has pulled it from the family chest or even that it’s stolen. Still, I’m not about to lay out four hundred dollars for something that may be worthless. I also worry about getting it out of the country if it is genuine. 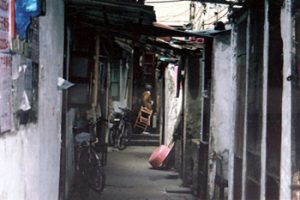 The next day I relate my encounter with Mister Lu to a Chinese co-worker, Ling. She agrees to return with me after her class that evening.

The night market is already winding down when we arrive. Many vendors are boxing up their unsold products and folding their tables. I lead Ling to the spot where I first encountered Mister Lu, but his table has vanished. We then proceed down the damp alley to the decaying, wooden door I had passed through the previous evening. I knock loudly but there is no answer.

Dejected, I return to the night market, which is now nearly deserted. The coloured lights are gone. Dimly illuminated by a single street lamp, the shimmering road now looks like any other street in Hangzhou.

How to get There:
Hangzhou has an airport, but most tourists arrive by train from Shanghai, 150 kms. to the northeast. Speedy trains make the frequent journey to Hangzhou’s impressive new station in about two hours.

When To Go:
The summer months see the largest number of tourists, even thought the weather is unbearably hot and humid. Winters tend to be cold and wet, while Spring and autumn usually offer ideal dry and temperate conditions.

West Lake:
For the Chinese, West Lake is one of China’s most famous tourist attractions. Hordes of tour groups from all over the country descend upon this 3 km. long man-made lake that has become the symbol of Hangzhou. Well manicured gardens and pavilions that are scattered around the lake make for a pleasant daytrip. Early morning is an ideal time to visit, when hundreds of locals converge there to practise tai chi.

Lingyin Temple:
This Buddhist temple, that was originally built in 326 AD, has been destroyed and rebuilt 16 times. Today’s structures are restorations of Qing dynasty buildings. The most impressive is the Great Hall, where you’ll find an imposing 20m-high statue of Siddharta Gautama. Don’t forget to light a stick of incense and say a prayer at the hall entrance.

Places to Eat:
Laiwailou Caiguan is right across the street from West Lake. Famous for its poached fish in sweet vinegar sauce, prices are reasonable if you avoid the really fancy dishes. For cheap eats, check out Yanan Lu near the night market for tasty local cuisine. The Hangzhou and Yintai department stores, located downtown, both have excellent food courts on their upper levels.

About the author:
Rick Neal is a free-lance writer who lives in Vancouver, Canada. He writes short fiction and travel stories. He’s travelled to China, Mexico, Central America, Turkey, and Europe. His dream is to someday write the great Canadian novel.