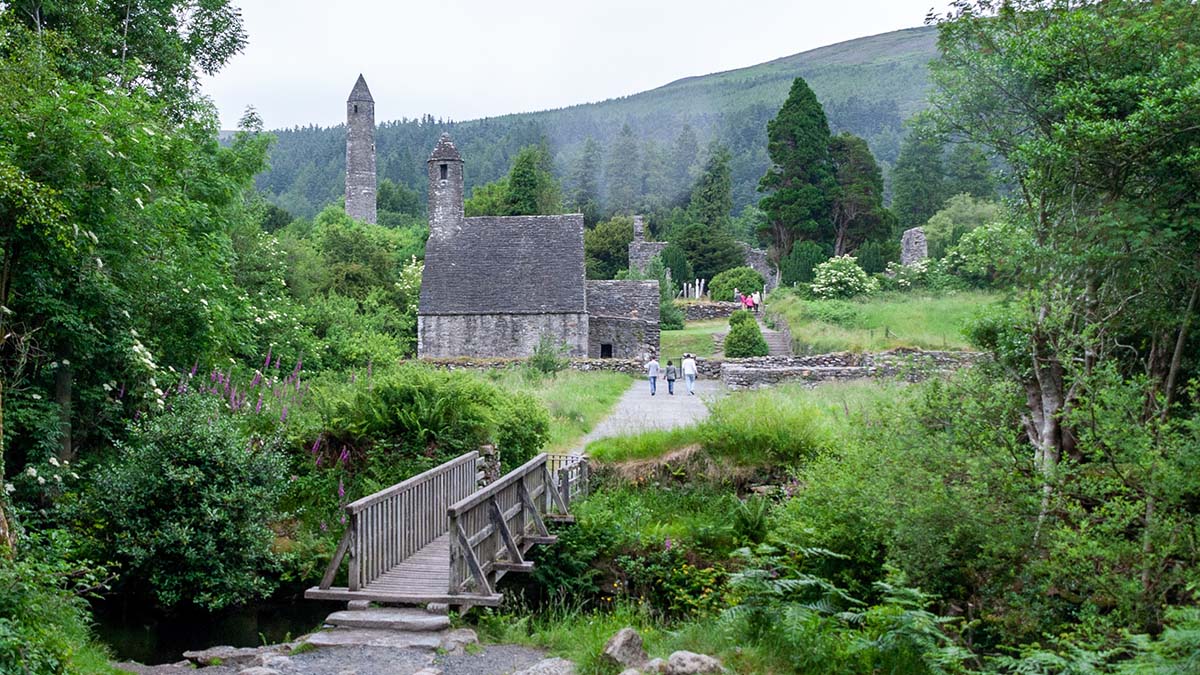 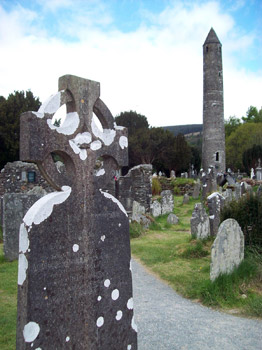 It is a sunny spring morning, perfect for a trip to Glendalough, an ancient “monastic city” set in a surround of Wicklow Mountains National Park, about an hour south of Dublin. Our local guide keeps us alert on the bus ride, pointing out the flora and fauna–the beauty of the yellow gorse which in other non-flowering seasons gets pelted with words such as weed, invasive, and noxious, the blossoming white thorn hedges, shades of green in the long vistas. As we zoom past farms and real estate signs, she chats about the state of the nation in this time of recession. “People cannot sell their properties; their mortgages are worth more than their houses. There is no longer a construction industry.”

We speed along the narrow roads. The jerk of the brakes make us appreciate our regular bus driver so much more. The price of gasoline as we flash by is twenty cents a litre higher than England or Scotland. But then again, these are Euros, not pounds. So what does it all mean?

“I bet everyone you meet has told you we are in a recession?” another guide had queried us.

“Yes, a recession,” we answer back obediently.

“Don’t believe them,” he asserted. “Don’t believe them. We are not in a recession. We are broke. Our three main industries,” the guide continues, “are agriculture, horse-breeding, and tourism. You might add to that,” she says, “the export of our young people who are snapped up by recruiters around the globe because they are reputed to be the best-educated youth in Europe.”

Indeed, education is part of the story of Glendalough, our destination. It was in places like this that learning was preserved on the westernmost edge of Europe during those dark centuries between the Roman Empire and the Renaissance.

“The Romans never did make it over to Ireland,” the guide informs us. “Pity”, she suggests. “Pity. They might have improved the roads.” 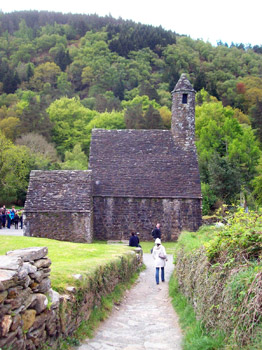 But the Roman church had crossed the choppy waters of the Irish Sea. Representatives had been dispatched from Rome in the 400s and the escaped slave Patrick had returned as a missionary in that same century. Glendalough was established in the early 500s by Coemgen (Caoimhin), St. Kevin. His Gaelic name means “fair-begotten.” Does it refer to his royal Irish birth or to his good looks? As a child, Kevin was tutored by Petroc of Cornwall, a Welsh-born Irish-educated saint. Kevin lived and studied with the monks and was eventually ordained himself.

Recession would not have daunted Kevin. He chose the life of an ascetic, moving to this glacial valley as a hermit, sleeping in a rock cave, on a flagstone bed, wearing the skins of animal friends, walking barefoot sole to ground, seclusion shielding him. Yet the world knew where to find him. It is said that witches bent on destruction he transformed to stone, and that a woman who tried to seduce him ended up in the lake. Responding to the demands pressed upon him, Glendalough became a seminary and Kevin fed his disciples with salmon fished for him by a benevolent otter. His hermitage had become a place of pilgrimage, a destination. 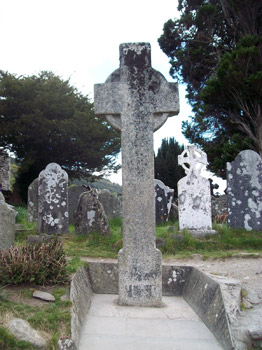 What compels me to forgo another day in Dublin for this side trip into the country? Being neither Irish nor Catholic nor even very religious, what can explain my interest in, my attraction to, this site? I have been to one of these ancient monasteries before–to Clonmacnoise on the River Shannon. Is it nostalgia, for that much earlier life-changing visit? It was from the friend who guided me to Clonmacnoise that I learned how to pronounce Glendalough. Glen da lock (loch). Not loo; it does not rhyme with slough, as I had incorrectly assumed that first time. Glenn da locha, the valley of the two lakes. The two communities were connected in the sixth century, by the friendship of Ceiran and Kevin. Both locations feature thirty-metre-tall round towers, thought to have been used like beacons, for navigating, as bell towers to signal distress, as safe storage for valuables such as psalters and illuminated manuscripts, and as places of refuge during times of attack. The monasteries include hermit cells, probably the only constructs that either saint actually touched. St. Kevin’s is a cave above the lake. The chapel, St. Kevin’s Kitchen, the rest of the existing ruins, date from between the ninth and twelfth centuries. 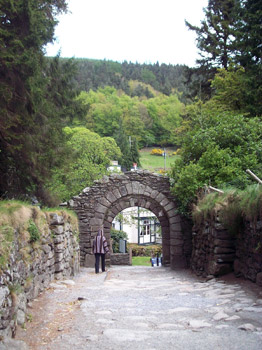 Both monasteries contain a collection of ruined buildings with designations such as cathedral, church, chapel, along with a profusion of Celtic crosses and gravestones. Here those who found a community while living are surrounded still in a community of the dead. Both sites have high crosses–the Cross of the Scriptures at Clonmacnoise and St. Kevin’s Cross at Glendalough, and evidently, a second high cross, the Market Cross, in the visitor centre.

Perhaps what propels me to Glendalough can be attributed to the romance of ruins. Or is it the literal tug of history, of grey moss-munched stones informed by human hands? Or to the way we make meaning from metaphor. In this human habitation which has been here more than 1500 years is an image of transience. Our days, the days of our civilizations, are measured, brief. What comes from the earth returns to the earth, and the earth remains. Or perhaps it is remnants of my personal New Age past whose spirituality and sense of the sacred still infuse my daily breath? Or is it simply trusting in the wisdom of the ancients who felt and responded to the pull of place, to the power of those forces which make some locations special? Because what St. Kevin built here, his refuge, nature altered by human hands, is not so much separated from contact with the world as it is connected to creation, its communicants living in peace, living in beauty. 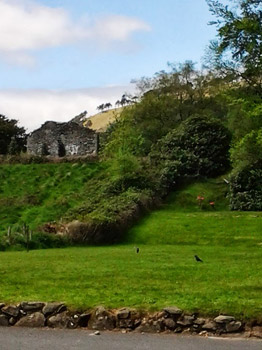 Just outside the double-arched gateway is a midway of tents and caravans. Linen tea towels, woolen “jumpers,” potato scones, postcards. Today the market of souvenir and food vendors does not even make me think of the temple and the moneylenders. After all, everyone has to eat, and it is a recession, and loaves and fishes no longer magically appear.

Irish poet Seamus Heaney in “St. Kevin and the Blackbirds,” retells the tale of how a blackbird nested in the saint’s upturned palm, on his outstretched arm, as he prayed, here, and how Kevin stayed immobile “until the young are hatched and fledged and flown.”

And since the whole thing’s imagined anyhow,” Heaney goes on, “Imagine being Kevin. . . . Does he still feel his knees? Or has the shut-eyed blank of underearth crept up through him? ‘To labour and not to seek reward,’ he prays, // A prayer his body makes entirely / For he has forgotten self . . .”

It isn’t until I get home to my computer, upload my photographs, and zoom in, that I see the blackbirds in the green. 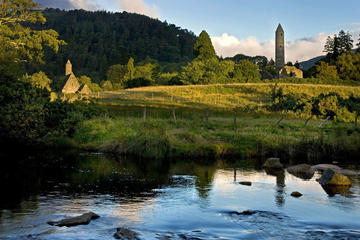 I went on an optional side trip organized as part of my fast and furious group bus tour through England, Scotland, Northern Ireland, Ireland, and Wales [Trafalgar British and Irish Delight]. Other visitors arrived by car and taxi, from Dublin, via Annamoe or Laragh. For details about travelling to Glendalough and Wicklow Mountains National Park, visit www.glendalough.ie, www.visitwicklow.ie or www.megalithicireland.com which offer a bit more information about the monastic city. 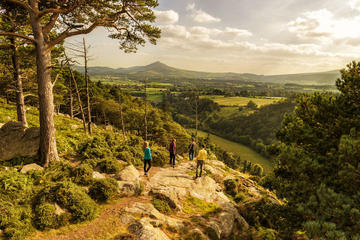 Photo credits:
Top Glendalough photo by Dimitry Anikin on Unsplash
All other photographs are by J.M. Bridgeman:
Glendalough round tower and moss-munched gravestones
St. Kevin’s Kitchen (so-called because the bell tower looks like a chimney)
St. Kevin’s Cross
The double-arched gateway with vendors beyond, gorse in bloom
Ruins from the parking lot, Wicklow Mountains beyond, blackbirds on the lawn

About the author:
J.M. (Joan) Bridgeman was born in Rivers and grew up on a farm near Oak River, Manitoba. Her travels overseas to Ireland, England, and Scotland are quests for mythic and familial connections which also touch upon her passions for geology, history, and literature. J.M. has been writing for publication, dozen of book reviews, articles, poems, and profiles, since 1980. Her non-fiction book Here In Hope: A Natural History was published by Oolichan in 2002. She blogs somewhat sporadically at www.earthabridge.blogspot.ca/ and has posted her creative non-fiction Dancing With Ghosts: A Cross-Cultural Education, a personal exploration of racism and human rights in Canada, at www.dancingwithghostsaneducation.blogspot.ca. Email: earthabridge@gmail.com