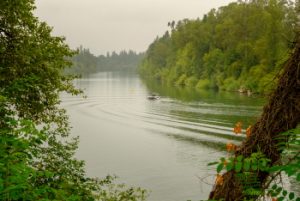 In 1861 Champoeg, Ore., was a bustling pioneer town. It enjoyed a prime location on the banks of the Willamette River, midway between the end of the Oregon Trail at Oregon City and Salem, capital of the newly minted state. Steam-powered sternwheelers plied the river; a ferry and stagecoach connected the town to nearby settlements and beyond. Like most pioneer towns, Champoeg (pronounced sham-POO-ee) boasted a livery stable, blacksmith and saloon, as well as three stores, a hotel, an Episcopal church and a bowling alley. The prosperous riverside town had a bright future — until it vanished in a single night.

On December 6, 1861, floodwaters rose nearly 47 feet, sweeping the buildings away and leaving little trace of Champoeg. Today the open meadows and shady groves of this peaceful riverside park give few hints to where the pioneer town once stood. Just 30 miles south of Portland, the townsite and nearby historic buildings are among five sites in the Champoeg State Heritage Area that play host to living history events and bring pioneer history to life. 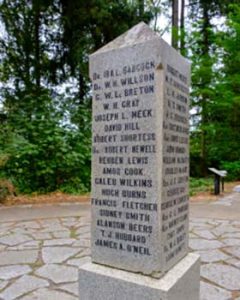 I like to start my visit at the Pioneer Monument, where it all began. Long before Champoeg became a town it was a meeting place where trails used by the Kalapuya people and fur trappers crossed the Willamette River. It was also where the Hudson’s Bay Company built their warehouse and granary and where, on May 2, 1843, roughly half the white male population of the Willamette Valley — 102 men — gathered to vote on whether to establish a provisional government. Both Britain and America laid claim to the Oregon Country, but neither had established a local governing body. With a margin of just two votes, the former fur trappers and settlers voted in favor of establishing a provisional government, setting Oregon on the road to U.S. statehood.

In 1901 a monument was erected in a shady riverside plaza on the spot where the vote took place. Many of the 52 names on the monument belong to the movers and shakers of their day. Their names grace counties, streets, parks and schools across the state. Among the names are those of legendary mountain man Joe Meek and his friend Robert Newell, who would sell lots in the town of Champoeg a year later.

This is also where living history reenactors host Founders Day in May and set up fur trapper encampments in spring and summer. On various visits, I’ve watched a black powder rifle salute, talked with a tinsmith and admired a wooden canoe beside the river. Special events bring the state’s pioneer history to life with demonstrations of pioneer craftsmanship and skills.

I often follow the path down the slope of the bank to the river. The trail hugs the riverbank, and though the river itself is mostly hidden behind the trees and brush, you can smell it — an earthy scent I always associate with willows and river mud. After about a quarter mile the trail rises, taking you to the top of the bank near the townsite of Champoeg. 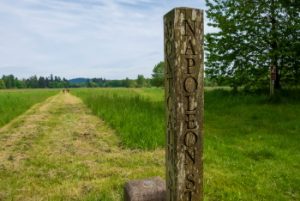 Newell, an American, and French-Canadian André Longtain platted the town of Champoeg in 72 blocks across their respective land claims. Each named the streets after his country’s heroes. The streets on Newell’s side of town have names such as Washington, Jefferson and Monroe. On Longtain’s side the streets are named after Lasalle, Orleans, Lafayette and other Frenchmen. Today, five-foot-high wooden posts engraved with street names mark the corner of each block.

Simple line-drawn maps of the lost town are available at the park visitor’s center. Towering black walnut and oak trees shelter Napoleon Street, the imprint of which is still visible beneath the grass. It leads down to the river, where a roughly cleared, 40-foot dirt slope shows where the ferry docked and sternwheelers came calling, bringing mail, travelers and goods to Champoeg.

If you stand in the clearing, back to river and map in hand, you can visualize the layout of the town. There, on your left, would have been Edward Dupois’ stagecoach office and store; on the right, Robert Newell’s store. A block or so further along Napoleon Street on the left, beneath the trees, was the Masonic Hall. At the edge of the meadow near the corner of Jefferson Street and Degrasse Street stood the bowling alley and the hotel.

Today the former townsite is home to a variety of birds and plump, grey California ground squirrels, often spied bounding across the grass to their burrows. Families ride their bikes along the shady paved path that winds through the grassy streets. More than four miles of walking trails and bike paths connect the townsite to the park’s campground, the Pioneer Monument, Robert Newell’s house and other historic sites in the Heritage Area. 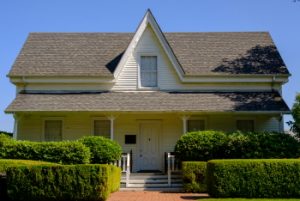 On a hill above the Champoeg townsite stands the white, two-story frame house that fur-trapper-turned-businessman Robert Newell built in 1852. It’s the centerpiece of the Newell Pioneer Village, which also includes the Pioneer Mothers Memorial Cabin, built in 1929; the Butteville Academy, a one-room schoolhouse and teacherage erected in 1859; and the Butteville Jail, which dates from 1848. The Newell Pioneer Village is owned by the Daughters of the American Revolution, which purchased the Newell house in 1952, restored it, and opened it to the public seven years later.

When the Willamette River’s floodwaters destroyed Champoeg, some of the townspeople found refuge with the Newell family, safe in their house on the hill. Today the house is preserved as a museum that showcases life in the mid-1800s with period furnishings throughout the house. The upstairs rooms hold a collection of evening gowns and accessories belonging to Oregon’s First Ladies (don’t miss the bullfrog purse), vintage quilts, spinning wheels and Native American artifacts. Costumed interpreters will guide you through the house, sharing the Newell family’s story and answering questions. They also provide programs for school groups from March through October. Newell Pioneer Village hosts dinners, teas, festivals and other special events throughout the year.

The Manson Barn and Pioneer Garden

In 1862, Donald Manson salvaged timbers from the flood and built a barn for his homestead on the bluff near the Newell house. Today the homestead is gone, but the barn still stands. Located behind the visitor center, the barn and garden are used for education and living history programs. You’ll want to check the park’s calendar to learn when blacksmithing, woodworking, tinsmithing and other demonstrations of pioneer skills are being held at the barn.

The hops arch is the centerpiece of the Pioneer Garden. The garden showcases a sampling of the heirloom varieties that a pioneer family might have grown for food, medicine and, of course, brewing beer. A variety of herbs, fruits, vegetables and flowers are planted in wide rows, including corn, beans, potatoes, tomatoes, grapes, blueberries, squash, melon, turnip, amaranth and shoofly. Stakes at each row or clump are handwritten with the name of the variety planted there. Some names are quite colorful: Tongue of Fire (bean), Love Lies Bleeding (amaranth), Bloody Butcher (corn) and Cherokee Trail of Tears (bean). 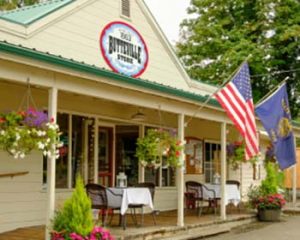 If you’ve worked up an appetite exploring the Heritage Area, walk or bike on the 2-mile bike path along the river to the historic Butteville Store, or drive the short distance. Established in 1863, it is the oldest continuously operating store in Oregon and is now part of the Champoeg State Heritage Area.

Once a rival with Champoeg for commerce and transportation along the Willamette River, Butteville came into prominence after the Great Flood of 1861 washed away Champoeg. The town is higher in elevation and though damaged, it survived the flood. It even acquired the school bell from Champoeg, which floated downstream and now is mounted in front of the Butteville Community Church.

The store flourished under the ownership of J.J. Ryan, selling groceries, provisions, hardware and general merchandise. He also bought hops from local farmers and sold them to Henry Weinhard, who opened a brewery in Portland in 1855. Ryan soon added a saloon to the store that proudly advertised “Weinhard Beer.” Butteville thrived until the Oregon & California Railroad in 1871 and the Willamette & Pacific Railroad in 1907 shifted commerce away from the river and to towns along the rail line.

Today the saloon is gone, but the Butteville Store still serves up a sudsy pint and a cool glass of wine during the summer season. It also offers espresso, deli sandwiches, breakfast items, ice cream and other food. The store hosts dinner and live music on Saturday nights from April through September. Grab a cup of coffee and a bite to eat, then stroll down to the old river landing, about a hundred yards from the store. Interpretive signs explain the history of the landing. It’s a good spot to contemplate the history of these early pioneer towns and the river that shaped it.

About the author:
June Russell-Chamberlin is a freelance writer and editor in Oregon. When she’s not exploring and photographing the gems and hidden corners of the Pacific Northwest and beyond, she can be found reading a good mystery or continuing her quest for the ultimate chocolate truffle. junerussellchamberlin@gmail.com