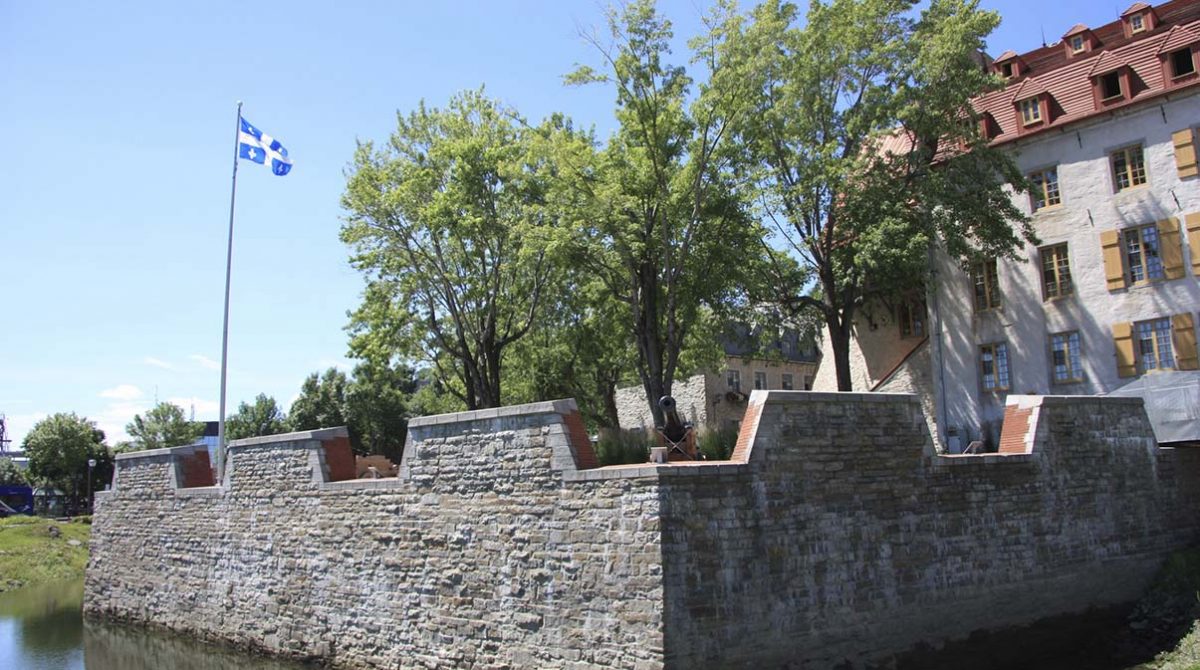 It was déjà vu all over again and in my mind the voice of Rod Serling said “Your next stop, the Twilight Zone.” How would you feel if one day you were in the 17th century and then the next day you were at the same site but this time in the 21st century? Is this a psychic flashback into history you may ask?

This is exactly how it felt when Diane and I toured the movie set of La Nouvelle France (New France) and then followed that up with a visit to real Quebec City the next day. It is not everyday that you can stand in front of a reproduction and then see what eventually became of the real thing.

Poof. We suddenly found ourselves standing at the river’s edge in early Quebec City between the years of 1608 and 1640. This location was selected as the set for the 1990 movie “Black Robe” because its landforms are similar to the actual site. 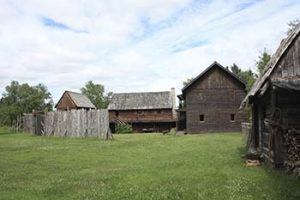 On July 3, 1608 Samuel de Champlain and 26 colonists sailed up the St. Lawrence River and landed in a narrow passage known as Kébec. Here they established a fur trading post consisting of three main wooden buildings, a wooden stockade and moat that they referred to as the “Habitation.” This was the origin of the Lower Town.

Near the river, you find replicas of several period houses, buildings and a trading post with all the necessities required for trade with the Indians including pots, pans and rifles. Aboriginal items obtained through trade included furs that had been bundled up for transport back to France and snowshoes for local use during the winter.

Carpenters and blacksmiths were kept busy in the colony with the construction of houses, buildings and defensive fortifications. The colony was highly dependent on these tradesmen and their homes have been reproduced here, along with the tools of their trade.

Ascending the rue (street) Côte de la Montagne to the Upper Town, Diane and I were greeted by a “Black Robe,” the Aboriginal name for a Jesuit priest, just outside Fort St. Louis.

Father Paul Menard, dressed in black cassock, invited us inside the palisade of Champlain’s 1620 fort. The first floor of the L-shaped two-story wooden building consisted of a large, well-stocked kitchen. A rifle hung from the wall just in case dinner happened to amble past. 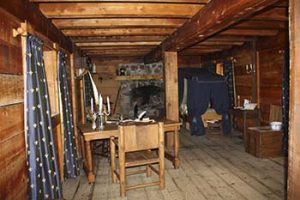 Champlain’s quarters, which he also referred to as his “habitation”, were on the second floor. His room had the finest furnishings on the whole set. A canopied bed and stone fireplace provided warmth during those cold winter evenings. A 3-pound cannon was placed in the corner near the window just in case undesirable guests decided to drop in for a visit like the Iroquois, the English or a mother-in-law.

Exiting the fort, we approached a wooden chapel, a replica of the first one constructed in Quebec City. The real chapel has since been replaced by the present-day Cathedral-Basilica of Notre Dame de Quebec.

Four wooden houses stand near the chapel. Father Menard’s single room home contains a wooden table with one place setting and several wine bottles for sacramental use only.

Approaching the baker’s house, you can imagine the smell of fresh crusty bread coming from the adobe oven outside.

The soldier/farmer’s log cabin was the most rustic of all with its wood and bark roof. Grass was stuffed between the logs for insulation. In case of attack, he had to drop everything at a moment’s notice, grab his musket off the wall and run to defend the settlement.

The occupation of the final home owner was not apparent. He may have been a merchant because the décor suggested he was a little better educated and well off financially.

Our final stop was a Huron Indian Village. A section of a 16-foot high log palisade stood between us and the two longhouses inside. The narrow corridor at the front gate turned back upon itself so that only one person might pass at a time. This made it easier for residents to defend themselves against any enemy that might dare to enter.

The longhouses, approximately 55 feet long, 15 feet wide and 16 feet tall, were constructed of thin logs and sheets of tree bark. 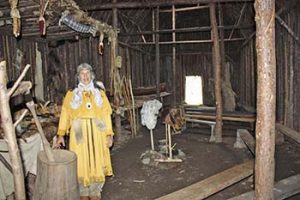 We entered one of the structures and found ourselves standing in a room permeated with the smell of wood smoke from the two fireplaces inside. We were greeted with the words “kwi kwi” (hello or welcome) from a Huron woman dressed in yellowish coloured animal skins.

She stood in front of a 3-foot high shelf, fashioned from tree branches, running along the length of the wall. The shelf served as a bed platform for the residents after it was covered with animal skins. This longhouse would have accommodated as many as 12 families (60 to 80 people).

After viewing the display, we thanked our hostess and then set off to visit Diane’s family in the real Quebec City.

Poof. We suddenly found ourselves in 21st century Quebec City, a UNESCO World Heritage Site, standing atop French Governor Frontenac’s 1691 Royal Battery. This stone battery once served to protect the harbor with 10 cannons to welcome any unwanted visitors. [Photo at top] 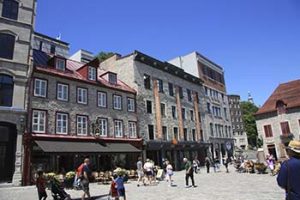 Dating to 1688, the Church of Nôtre-Dame-des-Victoires is the oldest stone church in North America. Visit the interior of this church and then head over to the Place-Royale Museum, site of Champlain’s first trading post. When you exit the museum, make a point to stop and admire the large mural on the side of a building which depicts all the famous people associated with the city.

You may wish to wander around the Lower Town and shop for that perfect souvenir. When you are finished, it’s time to visit the Upper Town. You can either ride the funicular to the top or walk up the old windy road known as the rue Côte de la Montagne. Your walk includes the Champlain Steps, the oldest flight of steps in Quebec City. Feel free to catch your breath along the way and enjoy the spectacular view before you.

Standing near the Champlain statue outside the Chateau Frontenac Hotel, we enjoyed the picturesque view of the Lower Town and the St. Lawrence River below. We then descended a stairway through the nearby Dufferin Terrace and found ourselves standing on the foundations of Fort St. Louis. This was the site of a succession of four different forts and two chateaus, all constructed between 1620 and 1834. These had all served as the residence of both French Governors and several British Governors General during the colonial period. Champlain himself was responsible for constructing the first two forts, both wooden structures, in 1620 and 1626 respectively. The third fort, built in 1693, was the first stone structure on site. Champlain’s personal quarters were located beneath the pantry of a later structure.

Other findings from later periods include the remnants of a kitchen with a large brick bread oven and hearth, an ice house with a wooden grate at the bottom to drain the melt water and a coal storage shed. 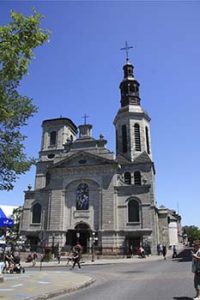 Champlain died on December 25, 1635 and was eventually interred in a chapel outside the fort three years later. This chapel burned down in 1640 and was ultimately replaced by the present-day Cathedral-Basilica of Notre Dame de Quebec. While the location of Champlain’s grave is still a mystery, Diane’s brother, Carl, noted that it was likely somewhere near the present-day cathedral.

Notre Dame de Quebec was the first Roman Catholic Cathedral constructed north of Mexico. As you enter the cathedral you pass beneath a stained-glass window over the front door depicting several Aboriginals. Inside, the apse showcases a statue of Jesus holding a large cross all set beneath several golden arches. A side chapel on the left houses the Saints Door which was gifted to the cathedral by Pope John-Paul II. This is the only holy door outside Europe.

Exit the cathedral through the front door and wander around the Upper Town. When you are finished you may wish to visit one or more of the local bars for a glass of wine. After passing through the Twilight Zone, Diane and I sure needed it. 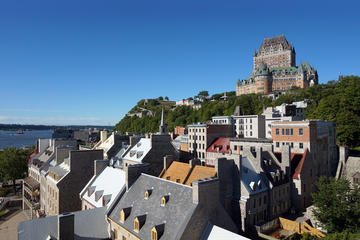 La Nouvelle France is located at 370 Vieux Chemin in St. Felix D’Otis near the City of Saguenay. Admission is $20.

The Place-Royale Museum is at 27 Place Royal.

The Chateau Frontenac is located at 1 rue de Carrieres. The Dufferin Terrace is right behind it.

The Cathedral-Basilica of Notre Dame de Quebec is at 16 rue de Buade. 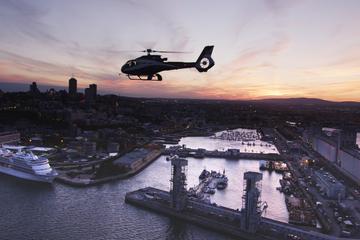 All photos by Diane Gagnon