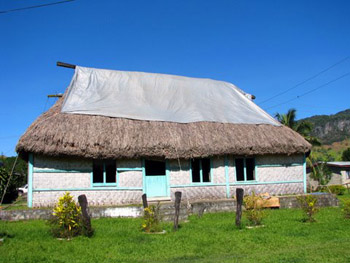 “We must choose a chief to lead our group in the Kava Ceremony,” said Captain Jack Sparrow (a.k.a. Josh). “Who is the oldest male here?” 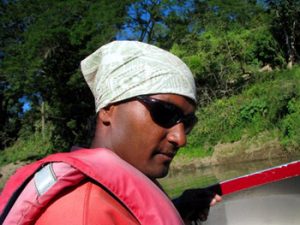 Everyone zeros in on the striking cumulus of grey on the head of Charles from the UK, who admits to his esteemed age of 55. Charles is given charge of a cloth bound yanqona or kava root, a cousin of the pepper plant. Our group of mostly Aussies, and a few British, and moi from Canada pile into a specially designed jet boat and with Captain Jack at the helm we are soon skimming the Sigatoka River to the remote village of Koronisagana to take part in the ritualistic drinking of kava.

The 120 kilometre Sigatoka River flows between the central and western mountain ranges to the coast of Viti Levu, the largest of Fiji’s 333 islands. It is the major means of transportation to this part of the island’s interior. Why the boat was built with a small draft is apparent with the continual changes in water depth, ranging from five feet to inches over sandbars that require a burst of speed so as not to get hung up. 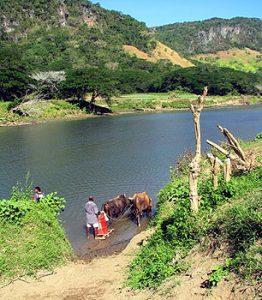 Emerald hills of lush tropical growth and shimmering marble cliffs that had seemingly been sliced by a mighty sculptor’s tool pass us by. In the lowlands workers wave as they tend the farm fields of the many villages along the way. Jack stops the boat beside the overhanging boughs of a gigantic tree with a blue scarf tied to a branch 15 metres above our heads. He says this was the water level reached during the floods of January 2009, destroying all crops, except taro.

At another point Jack comments, “There is a school on the right bank. Children from the villages on the left side of the river swim or wade across to go back and forth to school. The little ones are pulled across on a tire-tube or raft.”

In about 40 minutes we step onto Koronisagana soil. This village is one of twelve which Sigotoka River Safari visits throughout the year; six villages once a week for a half-year, then the next six villages for the following half-year. This method gives each of these villages extra income, while not encroaching unduly on their traditional way of life. 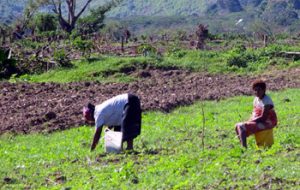 Captain Jack whips off his pirate’s bandana, and instructs us to remove our head gear as a sign of respect. We ladies wrap the sarong provided by the tour around our shorts and pants.

After a fairly steep incline the dirt path weaves through fields with women stooped hoeing and weeding. We shimmy over to one side to make room for oxen being led to the river where the sizeable tank strapped to a small wagon will be filled and pulled back up the path to water the fields.

We are welcomed at the village entrance by guide Lapani who leads us through the modest dwellings of brick or weathered wood with corrugated tin roofs and splashes of colour on doors and window frames. The dominant structure is the towering thatched roofed chief’s house built according to tradition with poles protruding from the front and back of the peak, which in the island’s cannibalistic days were used as skull holders of defeated enemy chiefs.

The simplicity and hardship of remote living is exemplified as Lepani proudly displays the prized upgrade to the village. Swinging open an electric panel box on the side of a building, he says, “We were given hydro by the government in 2006, before that we had to haul in kerosene for lamps which cost us $2.00 a day, and now our hydro is $2.00 a month.” 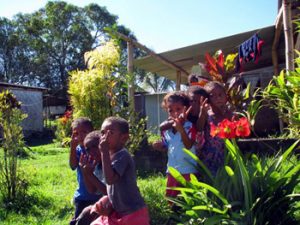 Unlike other lands once colonized by a European country, and in Fiji’s case Britain, the native Fijians own 86% of the 333 islands that make up the Republic of Fiji (thanks to Sir Arthur Gordon, the first Governor of the Colony in 1875); the remainder being freehold and crown land. The native lands are exempt from taxes, but the villages that are the stronghold of Fijian society, lack infra-structure and adequate roads; issues that are slowly being addressed.

Lapani tells us lineage determines the village chief, but if the oldest son is not willing or able to become the next chief, the position can go to the next son in line. Being born into a village means membership for life and provides a caring haven for their handicapped and elderly. When women marry and leave for their husband’s village, they are still deemed as belonging to their birth village and return for weddings, funerals, family visits. Uncles on the mother’s side play an important role as arrangers of marriages on behalf of their nieces. “Where is your farm?” is the pivotal question posed to a young man to ensure a good life for the girl whose hand he requests in marriage.

Small children dance along beside us throughout our village walk, their little fingers springing into a “V” the moment they see a camera. Removing our shoes we enter the chief’s house and sit on grass mats across from Chief Aipate and a row of men, backed by a smattering of children and women. 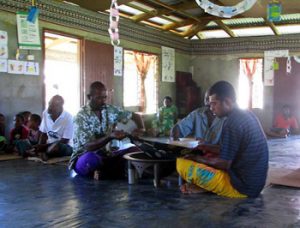 The ceremony begins with traditional calls of welcome. Our Chief Charles presents our gift of kava root to Chief Aipate. With much solemnity the men on either side of the chief prepare the kava. Previously dried and crushed kava is mixed with water and strained through a cloth into a tanoa bowl. The long cord affixed to the bowl with a seashell at its end is placed outward to signify the kava is ready.

Our honorary chief is the first to be offered kava in a bilo (half-coconut shell); next the village chief, then a guest and a village member in turn. I had tasted kava once before and although not terribly anxious for seconds, propriety won out. I tip back the tongue-numbing earthy tasting mud-brown liquid, then clap three times according to custom. 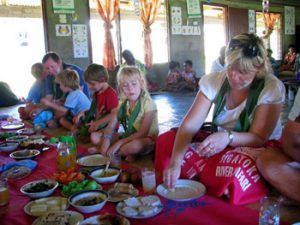 At the end of the ceremony musicians fill the cavernous house with catchy tunes. The village men and women sprint over to cajole us guests onto the floor for an uproarious Meke dance called taralala, where we mimic the hilarious antics of the lead dancer.

While we sit again to catch our breath the women cover the grass mats with long clothes and platters of food. Having poked my head into their rudimentary communal kitchen, the feast spread before us is akin to a miracle. The taste and texture of fare with unpronounceable names is exquisite. The dough-nutty bread is my favourite, as is the seasoned cassava root slices.

Hardly a word is uttered by anyone in the group on the way back to the boat. Perhaps like me they are reluctant to leave the heart-warming hospitality of the villagers. Captain Jack knows how to lighten our melancholy. He spins the boat into 360º turns until we are all shrieking with laughter and soggy with the spray. A day never to be forgotten. 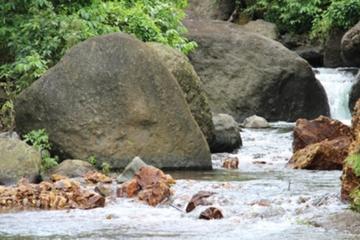 Sigatoka River Safari begins at the Coral Coast town of Sigatoka on the island of Viti Levu. The tour includes van transportation for 16km through Sigatoka Valley to and from the off-the-beaten-track dock where the jet boats are boarded.
www.sigatokariver.com

About the author:
Irene Butler is a Richmond B.C. based travel journalist/photographer who with her husband Rick has trekked through 63 countries to date. She loves off-the-beaten-path travel best. www.globaltrekkers.ca.

All photos are by Irene and Rick Butler.