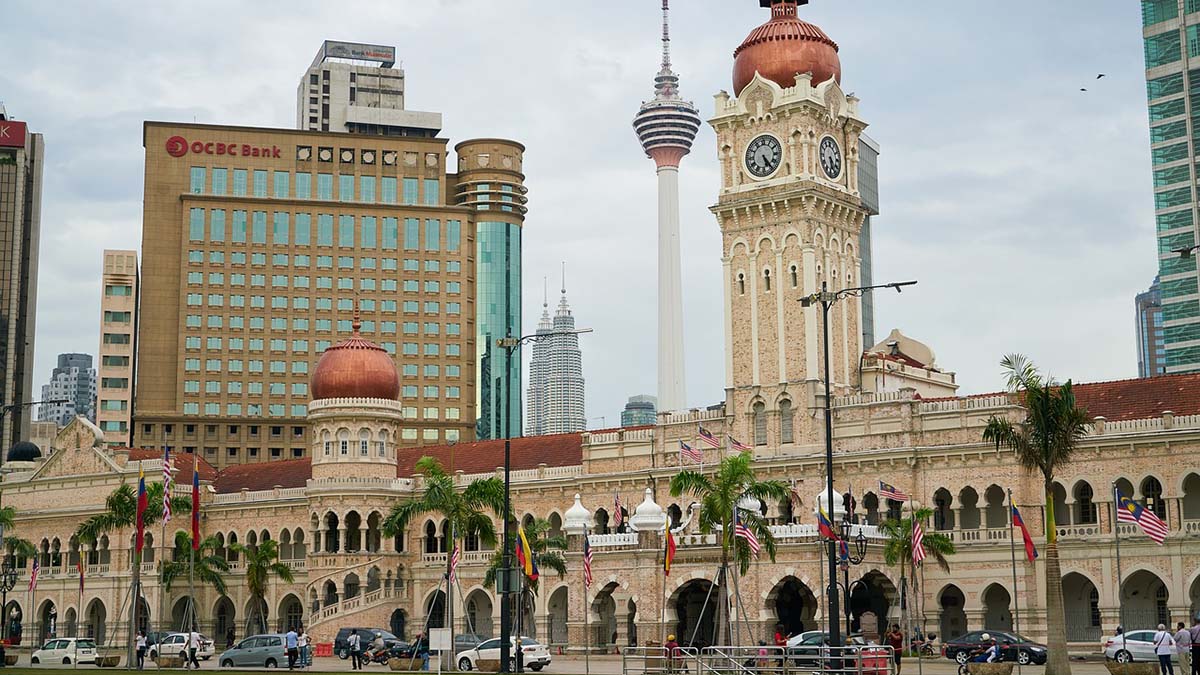 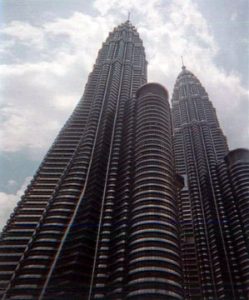 As soon as I stepped off the plane at Kuala Lumpur International Airport I felt as though I had arrived at a space-age Wonderland. The city sky-line rises out of the misty green landscape, pierced by the spires of the Petronas Twin Towers, once the tallest towers in the world, and the single minaret of the Menora a telecommunications tower.

Truly a wonder! From the futuristic sleek, space-age high-rises to the ornate Colonial buildings it is an architect’s dream and offers the visitor old-world charm, a fascinating history, unique cuisine and a melding of various cultures.

The city began as a tin mining settlement in the late 1880’s and rose to a bustling modern metropolis with a population of two million. Kuala Lumpur (known as K.L.) means “muddy confluence” and is called The Garden City of Light because of its beautiful parks, gardens and brilliantly lit ultra modern buildings. 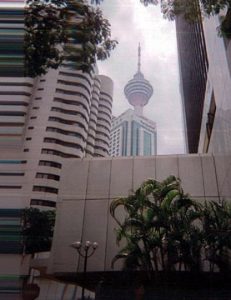 Arriving at the luxurious Mandarin Oriental Hotel, I was graciously greeted by the staff, all dressed in traditional Malay garb, and escorted to my room. The wonders had only begun though. I discovered that my hotel was right next door to the famous Petronas Towers (owned by the Petronas Petroleum company). These towering edifices, designed in Islamic architectural style as an eight point star, are built of steel and glass and stand 452 meters high, each connected to the other by a sky-bridge mid-way up. They were featured in the movie Entrapment, starring Catherine Zeta-Jones and Sean Connery. You must line up from 8:00 each morning inside the entrance to obtain your free tickets. Because of my short stay in K.L. I was unable too obtain one so I opted instead to walk the few blocks from my hotel to visit the Menora, a telecommunications tower which ranks fifth in the world along with the C.N. Tower in Toronto. A shuttle-bus took me up the hill to the entrance. From the observation deck of the tower I was treated to sweeping panoramic views of the city. 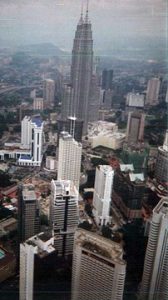 Sandwiched between the Mandarin Oriental Hotel and the Petrona Towers is the extravagant Suria KLCC, a shopping centre that is home to every known designer — the real goods, not copies! Alongside the Guccis and Versace are well-known brands such as Bata Shoes and The Gap. I spent a half day there browsing and sampling the variety of excellent restaurants. In spite of its exclusive shops, the prices aren’t all that outrageous. The Malaysian ringgit has been kept at a low rate which makes Malaysia a shopper’s paradise. There are good buys at the British India in the Lot 10 shopping complex too. Prices are low and quality high.

After my first day of exploring the area around my hotel, I treated myself to an culinary experience at one of the exclusive restaurants in the Mandarin Oriental. Whether you’re eating at an upscale restaurant or one of the many outdoor patio cafes, dining in Malaysia is a gastronomic adventure offering a unique profusion of tantalizing flavours and culinary delights from Malay, Chinese, Indian to a host of other cultures. I chose a delicious dish of satay, skewers of marinated chicken served with a spicy peanut dip accompanied with ketupa (rice cubes boiled in palm leaf) and a cucumber salad. 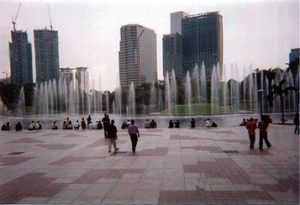 You need more than a few days to take in all the sights in this remarkable city. Because I was there for only a limited time before heading north to the islands, I took a city tour to get a taste of the exotic fares offered in K.L’s sensory feast.

The first stop on the city tour passes by the origins of the city. At the murky intersection of the Klan and the Gombak Rivers, the birthplace of K.L. is the quaint Masjid Jameh Mosque styled after the Mogul mosques of North India. All around it are the first of the Moorish-style colonial buildings built in the mid 1800s including the law courts. This is the Official Quarter where the British administrators built their offices around the Padang, a field that used to be a police parade ground and venue for cricket matches. Overlooking the square is the Selangor Club, built in 1890, a charming mock-Tudor building where once K.L.s society held court. Here, at Merdaka Square is the spot where the Union Jack was lowered on August 31, 1957 signifying the end of British colonial rule. Now the 100 metre flagpole proudly displays the Malaysian flag. 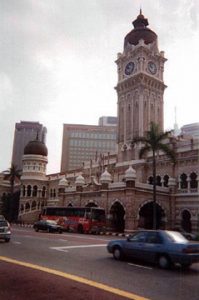 Across a wide swath of green lawn, surrounded by a high black iron fence, is the Istana Negara, the official residence of His Majesty the King of Malaysia, a sumptuous yellow building that was once the home of a wealthy Chinese man who had seven wives. Yellow is the royal colour and once upon a time you were shot if you wore yellow!

In front of the gold crested gates the imposing horse guards perform a changing of the guards ritual reminiscent of the horse-guards in London.

Malaysia gained independence from the British on August 31, 1957. To avoid rivalry, the nine Sultans of Malaysia take turns every five years as King. The country is governed by a Prime Minister from the Cyber-city of Putrajaya, just outside of K.L.

From the palace and elegant law-courts, we drive by the Lake Gardens Park where the original settlement started. This huge park sprawls over 200 acres and is home to the world’s largest covered bird aviary, a walk-in free flight area for about 3,000 birds comprising 200 species and a butterfly sanctuary where you can watch more than 6,000 butterflies of various species flutter around the tropical rainforest. There are also Orchid and Hibiscus Gardens which pay tribute to the bunga raya, Malaysia’s national flower. 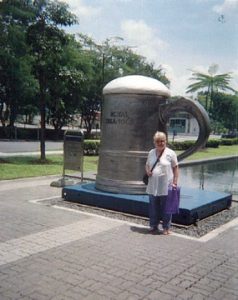 We stopped at the Royal Selangor pewter factory where the workers demonstrated how pewter is made and the Cultural Craft Museum where we are shown how jewelers make gold rings by a wax molding.

At the National Museum I wandered through galleries displaying the eclectic Malaysian cultural history. The Malay are the largest ethnic group accounting for over half the population and national language. 60% of the Malays are Muslims who co-exist with the Chinese Buddhists and Indian Hindus. The blend of these cultures is displayed in their architecture, crafts, the cuisine and the colourful garments worn by the people.

The National Mosque, an architectural wonder designed with a blue umbrella roof, accommodates 5,000 people. Nearby is the Islamic Arts Museum with its intricately designed mosaic entrance. On display are a variety of artifacts including ceramics, glassware, porcelain, scrolls and bronzes. Many of the textile and jewellery exhibits are from India.

That evening, it was a unique experience to sit by the sparkling roof-top swimming pool at the Mandarin Oriental. As I sipped a cocktail decorated with an orchid, I suddenly heard the captivating, mystical sound of a Muezzin’s call to prayer wafting over the rooftops. My visit to this beautiful city was brief, but unforgettable. Somerset Maugham was right. If you haven’t seen this place, you haven’t seen the world. Kuala Lumpur truly is a wonder. 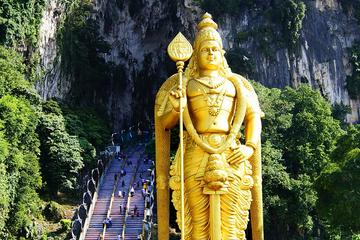 Getting Around:
The city has an efficient transportation network including a light rail transit LRT known as STAR. Trains operate from 6 a.m. to 11.20 p.m. daily with extended hours during public holidays.
Air conditioned buses operate within the city as well as to urban points.
An overhead monorail system lops through the city’s Golden Triangle (business district) and runs past most of the strategic areas.
There are numerous car rentals or taxis may be hired from taxi stands, hailed at the roadside or paged through a radio-phone system.
At Moorish-style K.L. Railway Station travellers may purchase tickets anywhere in the Peninsula.
A wide range of accommodations are available in K.L. from international-standard hotels and resorts to medium priced and budget hotels that offer bed and breakfast.
The Mandarin Oriental Kuala Lumpur (5 star)
All credit cards are accepted and ATMs are readily available.

About the author:
One day W. Ruth Kozak, who has never played the lottery because she usually doesn’t win anything, was lucky enough to win a trip to Malaysia. It wasn’t on her ‘dream destination’ list, but once she’d landed in the amazing city of Kuala Lumpur she knew that she had, like Alice, arrived in Wonderland. Ruth writes, teaches, and publishes travel stories. Now she thinks she should take up playing the lottery!
travelthroughhistory.blogspot.com
wynnbexton.blogspot.com

Photo credits:
First Kuala Lumpur photo by Engin Akyurt from Pixabay
All other photos are by W. Ruth Kozak