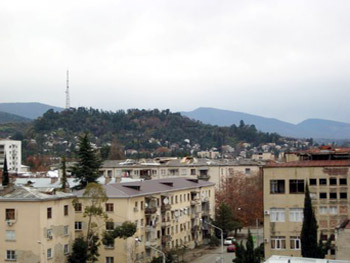 “Have you ever been to Sukhumi?” asked an Abkhaz military officer at the border between Georgia proper and its breakaway region of Abkhazia.
“No.”
“You are not going there this time either,” he said. “You have three minutes to leave the territory of Abkhazia, no questions asked.” 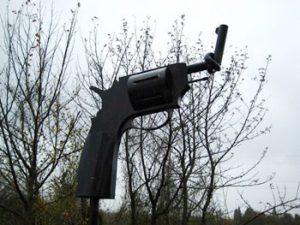 I started walking back across the Inguri River Bridge, which separates the post-Soviet Republic of Georgia from what once used to be a prime tourist destination in the former USSR, Abkhazia. The bridge’s halfway point boasts a statue of a gun with a twisted barrel, a vague copy of Carl Fredrik Reuterswärd’s sculpture Non Violence at the UN headquarters in New York. I could hardly think of a more ironic place for housing this embodiment of peace and diplomacy.

Georgia and its autonomous republic of Abkhazia was part of the Soviet Union until the latter collapsed in 1991. Ethnic tensions between Georgians and Abkhazians, which had been intensifying towards the end of the 1980s, led to the 1992–93 separatist war in Abkhazia that resulted in a Georgian military defeat, Abkhazia’s de facto independence, ethnic cleansing and mass exodus of the Georgian population from Abkhazia. Despite the 1994 ceasefire agreement, the conflict again flared up on several occasions. In August 2008, the sides again fought during the five-day Georgia-Russian war, after which Russia, Nauru, Nicaragua and Venezuela formally recognized Abkhazia’s independence.

I had spent two hours on the Abkhaz border waiting for permission to enter its territory. CIS (Commonwealth of Independent States) countries have a visa-free regime with Abkhazia, but I failed to consider that the Georgian-Abkhaz border is now closed and anyone attempting a crossing is required to gain a written permission from the Ministry of Foreign Affairs of Abkhazia.

Multiple phone calls and e-mails later, I hurried back to the border with a permission letter in hand. A Georgian taxi driver, a refugee from Gali, Abkhazia, who now resides in Zugdidi, Georgia proper, drove me back to the bridge.
“Do you ever go to Abkhazia?” I asked.
“No, my father was fighting on the Georgian side during the war [of 1992-93]. I cannot cross the border.”
“Would they [the Abkhaz side] really know about your father?”
“Yes, they keep track of people who participated in that war. I cannot go home.”

I heard a similar story on the other side of the bridge. “This is where my world ends,” said an Abkhaz military officer of mid-twenties, pointing to the bridge across the Inguri River. “I cannot cross that bridge. But I do not care.”

The Abkhaz officers at the border, most of whom are too young to have fought in the 1992-93 separatist war, cherish Abkhazia’s de facto status of an independent country. “Look, we have won this war: a 100,000 against 4 million,” the officer said. “We deserve our independence.” 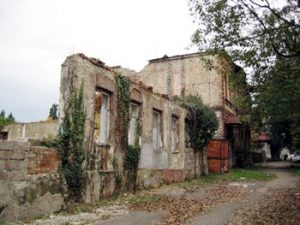 He told me a story about the origins of Abkhazia that has been passed between the local generations for centuries: “When god was giving out lands to people, he gave away everything on earth and left a little piece for himself. But then an Abkhaz approached him asking for land. ‘But I already gave everything away, why did you come so late?’ asked god. ‘Because I had some guests over at my place and I needed to give them due attention,’ said the Abkhaz. And thus god gave him the territory of Abkhazia as a reward for his hospitality: a piece of land god had actually reserved for himself.”

Ironically, the Georgian story about their own country’s origins starkly resembles that told in Abkhazia.

Historically, the territory of Abkhazia was part of the ancient kingdom of Colchis from the 9th to 6th centuries BC, which was later absorbed into the kingdom of Egrisi. The Roman Empire conquered Egrisi in the 1st century AD and ruled it until the 4th century, when it regained some independence. Abkhazia became the dominant power in the region establishing the kingdom of Abkhazia after acquiring Egrisi via a dynastic union in the 780s. The kingdom then annexed a significant part of Eastern Georgia, including Tbilisi. In the 11th century Abkhazia and the eastern Georgian states were unified into a Georgian monarchy. Abkhazia became an autonomous principality in the 16th century after the Georgian kingdom disintegrated. It then came under the influence of the Ottoman Empire and was eventually absorbed into the Russian Empire, later becoming part of Georgia and the greater Soviet Union.

After crossing the border I took one taxi from Inguri to Gali and another from Gali to Sukhumi, the capital. The road from the border to Gali and further to Ochamchira is almost nonexistent. The distance between the two is only about 30 kilometers, but it takes an average of 2 hours to get through this stretch of terrain. The passage becomes even more dangerous at night, and the local taxi drivers charge about $70, double the daytime rate, when driving in the dark. “Hold on to the floor with your feet,” said my taxi driver, Alek, an ethnic Greek living in Ochamchira. “If I have to break sharply, this should help you against flying into the front window.” 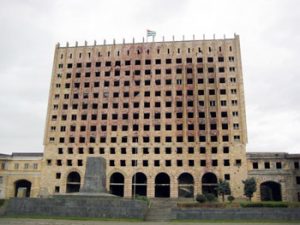 According to Alek, several years ago it was virtually impossible to drive on this same road past sunset. Supporters of both sides waged a guerilla war along this highway even after the cease-fire agreement of 1994. As we discussed the driving precautions, the conversation inevitably turned political.

“What were the two empires in the Soviet Union?” asked Alek. “Russia and Georgia,” was his answer. “There is nothing in common between the Abkhaz people and Georgians.”

De facto independent Abkhazia (now considered by the Georgian government as a territory occupied by the Russian forces) held presidential elections in December 2009 with the incumbent candidate, Sergei Bagapsh, securing 59.4% of the vote and his mandate. I was travelling to Sukhumi to cover the elections.

As we drove into the capital of Abkhazia I requested to be dropped off at a decent hotel somewhere downtown. Alek chose Inter Sukhum, one of the most upscale places in town situated several blocks away from the waterfront. The downside of travelling to Abkhazia is a pressing need to have a sufficient amount of cash, dollars, Euros or Russian rubles, to carry one through the stay. No major credit cards are accepted here either by the banks or businesses. 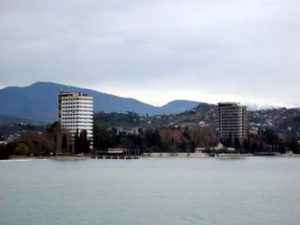 Next morning, I woke to a gloomy sight of Sukhumi in the wintertime. My hotel room window opened to reveal a view of shallow, burned out buildings that occupied most of Sukhumi’s landscape. The local people constantly asked me whether I liked their city. It was impossible to say I did not: the nature was in fact breathtakingly beautiful. At the same time, however, its glory paled in comparison to streets of burnt-out and partially destroyed apartment buildings that stretched across the city’s downtown. Many of the buildings still house residents on the lower floors, while the upper stories served as memorials to the darkness and despair of war.

One of the city’s main attractions is the Government House of Abkhazia, destroyed in the Abkhaz offensive of September 1993. A tall overbearing structure, it is visible from the waterfront and many other parts of the city. Its hollow and burnt-out interior stirs emotions nothing short of horror. Crowned with an Abkhaz national flag, the building is surrounded by empty parking lots and a similarly abandoned park. The entire complex leaves an indelible impression of war and brutality it brings.

On a Saturday afternoon Sukhumi seemed depopulated. I could not escape thinking that the city was built for a far greater number of people than it now houses. “There are 250,000 refugees from Abkhazia,” said a Georgian refugee from Gali whom I met at the border. “It is more than the total population of Abkhazia today.” Reportedly, anywhere between 180,000 and 200,000 permanently reside in Abkhazia. The actual number has not been determined. 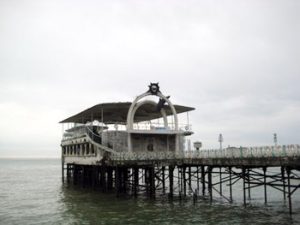 Abkhazia is place where time seems to have stopped 25 years ago. I woke up to a truly Soviet breakfast in my hotel, followed by a walk across a city that does not house brand name stores, coffee shops with Wi-Fi or modern supermarkets. I had a feeling I was firmly entrenched in the past, the Soviet past, in a place that no longer exists.

On the night after the election I met Bagapsh supporters at a café located close to the Central Election Committee. As the committee counted the votes secured by heavy military presence, young Bagapsh supporters spoke about prosperity and democracy in Abkhazia. “We just want to make sure you leave with the correct impression,” they said.

I left on Monday as rain was pouring from the sky, wind slamming uneasy waves at the Sukhumi waterfront. Several hours and a couple of taxi rides later, I was again at the Inguri Bridge, water reaching my ankles. I left with a bounty of impressions, few of them as “correct” as the Abkhazians I had met would have wished. 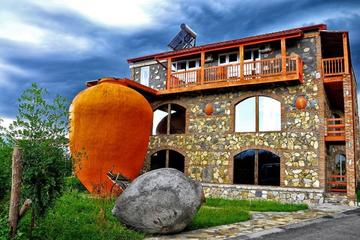 Kakheti Wine Tour with Tastings and Lunch from Tbilisi

Visa: Foreign citizens travelling to Abkhazia (except those from CIS countries) are required to obtain a visa. Requirements for obtaining the visa can be found here: www.mfaabkhazia.org

Entry: There are two ways to enter Abkhazia: either through the Georgian-Abkhazian border on the Inguri River or through the Russian-Abkhazian border on the Psou River. Those who travel to Abkhazia via Russia should have a Russian double or multiple entry visa to be eligible to enter the Russian Federation again after they return from Abkhazia. If travelling from Georgia, one needs to obtain a permission letter to cross the border even if a visa is not required. Find more details at: www.mfaabkhazia.org

Where to Eat: There are several cafés and restaurants along the waterfront. Nartaa is known for excellent Abkhazian food at minuscule prices. Hotel Ritsa houses Restaurant San-Remo known for an international menu.

About the author:
Lizaveta Zhahanina is a freelance journalist based in Tbilisi, Georgia. She has written for a number of local and international publications, including Investor.ge and IWPR (Institute for War and Peace reporting). Zhahanina covers a multitude of issues pertinent to Georgia and the South Caucasus at large, including politics, culture, economy and society. She also travels extensively and writes about her experiences on the road.

All photographs are by Lizaveta Zhahanina.
1. The Sukhumi landscape as seen from my window at the Inter Sukhum hotel. The city is littered with partially and completely destroyed buildings. While some have not been lived in for years, others still house residents on the lower floors.
2. Photo: A statue of a gun with a twisted barrel standing in the middle of the Inguri River Bridge. It is a vague copy of Carl Fredrik Reuterswärd’s sculpture Non Violence at the UN headquarters in New York.
3. A street in downtown Sukhumi. Much of the destruction was brought about by the 1992-93 separatist conflict with very little repair work having been done afterwards.
4. The Government House of Abkhazia, destroyed in the Abkhaz offensive of September 1993. The building is completely burnt-out and hollow inside. It now functions merely as a symbol of war and its brutality.
5. Sukhumi waterfront. During the Soviet time, Abkhazia was considered a prime destination for tourists from the USSR.
6. Restaurant Amra situated on the Sukhumi waterfront. Years ago it used to be well-known across the Soviet Union. Now, the restaurant’s terrace functions only in the summer, with its interior remaining closed and abandoned.