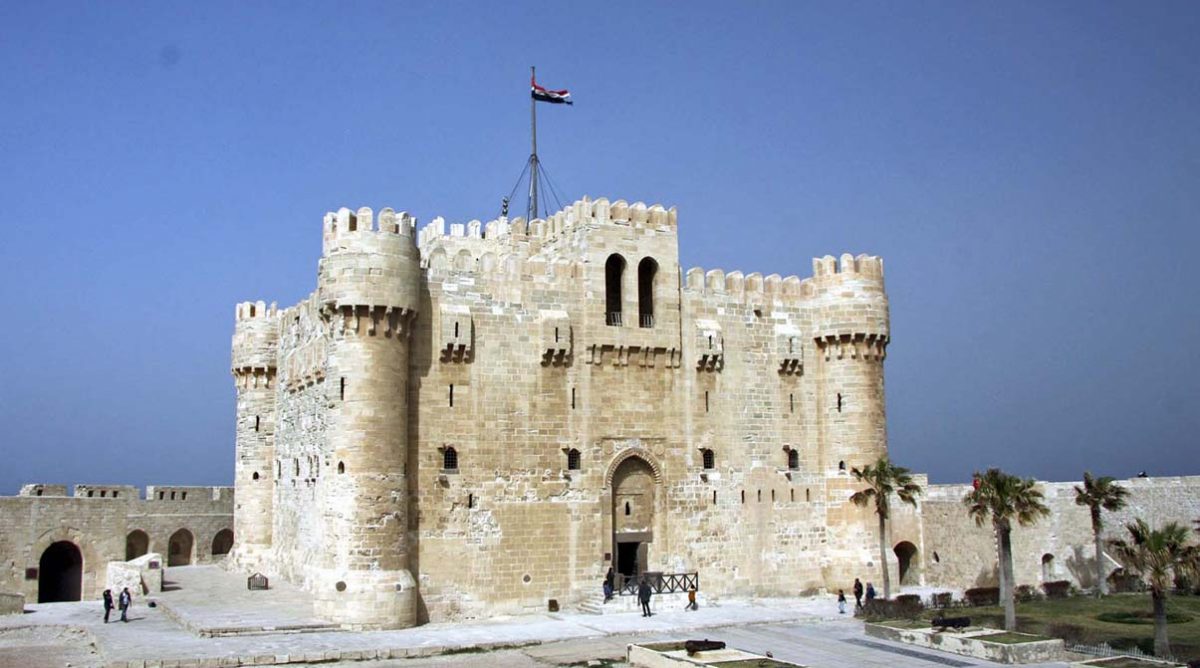 Present day Alexandria is seemingly disconnected from its ancient past. Visitors are drawn here by images of Alexander the Great, and the tempestuous romance between Cleopatra and her lovers Julius Caesar and Marc Anthony. Unfortunately, nothing related to these people remains. Alexander’s tomb has been lost to history and Cleopatra’s palace is now submerged under water somewhere offshore. Even the Pharos, one of the seven wonders of the ancient world, and the Great Library of Alexandria were destroyed.

What should a traveler explore when visiting this fascinating city? While a number of the historic sites that you can visit are above ground, you should still dig deeper. Beneath your feet, you find fleeting glimpses of a Ptolemaic-Roman city. After you have seen the light, there are also Byzantine and Mamluk-era ruins to explore above ground. Where should you begin your tour? Why not get into the spirit of adventure at the catacombs.

The Catacombs at Kom al-Shoqafa

The Catacombs at Kom al-Shoqafa, in use from the 2nd to the 4th centuries CE, were discovered in 1900 after a donkey accidentally fell through an access shaft. Fortunately, your entry will be a great deal safer. Descend the spiral staircase down to the first level in a clockwise fashion as it runs around the periphery of a 6-meter wide circular shaft. This shaft may have been used to lower mummies into the catacombs using a rope and pulley.

The rotunda is a circular chamber at the bottom of the stairwell which served as the junction for all three levels of the necropolis. At its center, a 10-meter deep shaft descends to the third level, now closed to the public due to flooding. Just look for a dome set upon 6 pillars over the shaft. 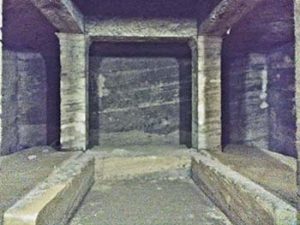 A short distance away is the triclinium or banquet room, approximately 9 meters wide and 8.5 meters long. The dining area is defined by four square sandstone pillars. Carved platforms extend between the columns on three of the four sides. Cushions were placed on top of these platforms and the family reclined around a central table in the company of their deceased relatives.

The name Kom al-Shoqafa translates to “Mound of Shards” because of the discarded pottery fragments found over this site. The family would discard all food containers after having visited this house of the dead. 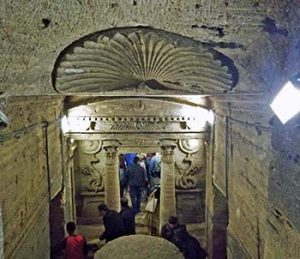 Returning to the rotunda, descend the stone staircase down to the second level and the Greco-Egyptian temple-like tomb. Carved from the surrounding sandstone, the porch-like pronaos is absolutely stunning with its two columns topped with papyrus, lotus and acanthus leaves. The façade is adorned with a winged solar disc flanked by two falcons. On each side wall, behind the columns, you find a statue set within a recessed area. Presumably these were the owners of the tomb; the husband is on the right and the wife is on the left.

Pass through the doorway flanked by two serpents into the naos or burial chamber. The finely decorated burial chamber houses three sarcophagi recessed into the walls. The lids were carved so that they could not be removed. Mummies were likely inserted from behind by means of a passageway running along the exterior of the tomb.

Exit the naos and walk around to the passageway. Here you find loculi on both sides to accommodate more than 300 mummies. I examined the passageway for any possible openings into the naos sarcophagi through which mummies might have been passed, but I found nothing. When you are finished, return to the rotunda and ascend the spiral staircase back into the light of day. Your next stop is Pompey’s Pillar. 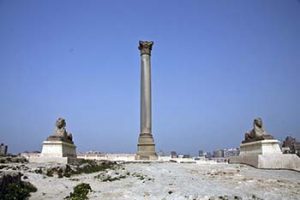 Set on top of the Acropolis of Alexandria, Pompey’s Pillar is a 285-tonne column of red granite standing just over 20 meters high. Pompey’s Pillar is actually a misnomer. During the Middle Ages, Crusaders mistakenly believed that the remains of the Roman General Pompey, who was murdered in 48 BCE, had been placed in a container at the top of the column. According to an inscription at the base, this was a Roman triumphal column dedicated to Emperor Diocletian in 297 CE. Diocletian was commemorated for having saved the city from a famine. Nearby is an honor guard consisting of two granite sphinxes.

Our guide, Sherif, indicated that Pompey’s Pillar is all that remains of a colonnade that consisted of 400 columns. This colonnade was part of a Serapeum, an ancient Greek temple dedicated to the god Serapis; Serapis was represented by a sacred bull. The Serapeum, constructed in 280 BCE, remained in use until 391 CE when the early Christians thought that this cult was a lot of bull and leveled the structure. Only two underground passages remain. 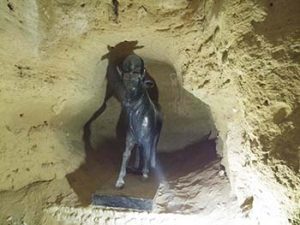 The first passageway is the Sanctuary of Serapis. Passing by an altar just outside the entrance, I entered a warm, humid tunnel roughly carved from the soft sandstone. Slowly, slowly, inch by inch, I crept along the dimly lit corridor, noting the irregularly-sized niches carved into the walls. These recesses may have accommodated statues at one time. Finally, I did not see the light at the end of the tunnel, I came face-to-face with a statue of Serapis, a large black basalt bull. This statue is a copy of the original, now housed in the Greco-Roman museum of Alexandria.

After finding your way out of the Sanctuary, enter the nearby underground gallery known as the Daughter Library. This 75-meter long tunnel with rough carved recesses in the walls was believed to house as many as 7,000 papyrus scrolls as overflow from the Great Library of Alexandria. Find your way down the finished white marble stairway and savor your connection with the Great Library of Alexandria. When you are ready, exit the Daughter Library and move on to the first above-ground site at Kom El-Dekka. 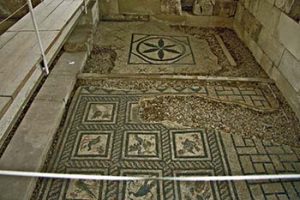 Kom El-Dekka (“Mound of Rubble”) is the site of a Greco-Roman residential community and various amenities. During the 1st and 2nd centuries CE, opulent homes like the Villa of the Birds occupied the area. This home is named for the seven colorful avian floor mosaics that include pigeons, peacocks, quails, parrots and flowers. There is even a panther if you look carefully. This villa has not been completely excavated but you will find traces of a triclinium. Look for the black and white mosaic floor.

What is the value of being middle or upper class without being surrounded by culture and higher education? Set inside a grassy hill, a short distance away from the villa, is the Odeion. Dating to the 2nd century CE, this theatre is believed to have been originally used for concerts rather than plays. Looking down from the side I was struck by the gleaming marble reflecting the mid-day sun.

The Odeion was badly damaged due to an earthquake in 535 CE and then reconstructed during the Byzantine period when it was transformed into a large lecture hall for a university. Perhaps this is why the structure, 33.5 meters in diameter, is shaped like a horseshoe. Looking around along the top edge of the theatre, you find 5 pillars. These are believed to have supported a roof at one time. Thirteen semi-circular tiers of seats accommodated an audience of around 600 people. The front row is carved from red granite; the others are white-gray marble.

This university also had at least 22 smaller classrooms or lecture halls. Each was approximately 5.5 X 11 square meters, with a stepped podium and at least 3 tiers of stone seats. During this period, Alexandria was a center for higher learning, so having a university would make sense. After graduating from this university, it was time to study Mamluk architecture at Fort Qaitbey.

Fort Qaitbey [Pictured at top – Ed] (pronounced “kite bay”), a Mamluk fortress, was constructed in 1477 CE on the ruins of the Pharos of Alexandria. The Pharos was reduced to rubble due to earthquakes in the 11th century CE and in 1383 CE. Sultan Qaitbey incorporated some of its honey-brown limestone into the fort that bears his name.

The site, roughly 150 X 130 square meters, was protected by an inner and outer wall; the latter has been badly damaged by the sea over time. Four crenelated defensive towers along the outer wall, two of which straddle the main entrance, protect the fort from invaders. If you smile when purchasing your ticket, you might just be able to enter unopposed.

Once inside, you are standing opposite the keep at the far end of the courtyard. This crenelated rectangular keep is three stories high with cylindrical towers at each corner.

Pass through the very solid wooden door and quickly look up at the octagonal opening in the ceiling known as an “oil fall”. From here attackers were provided with a warm welcome of boiling oil. If you make it safely past this point, you are inside the mosque.

This impressive mosque features richly decorated marble mosaic floors and walls and a decorative semi-circular mihrab. A mihrab normally serves to orient the congregation toward Mecca during prayer, but not in this case. The architect was more concerned with the military functionality of the fort rather than proper worship.

This mosque has four iwans. An iwan is a rectangular gallery with walls on three sides; the fourth side is open. These were used for religious teaching.

Climb the stairs to the second floor which consists of rough-cut limestone corridors and many small rooms which possibly served as barracks. The third floor features the Sultan’s iwan. This open-air rectangular room, approximately 4 X 6 square meters, was where the Sultan could meet with visitors. Nearby are two brick ovens for baking bread. While on this floor, take the opportunity to climb one of the defensive towers to enjoy a panoramic view of the area. After completing your guard duty, exit the keep.

A short walk away, I was able to climb the crenelated outer wall, some sections of which are as much as 8 meters high and 2 meters thick. At the top, I found two cannon mounts upon which a cannon could be swiveled to any angle. With this, I focused on the Bibliotheca Alexandrina in the distance.

The Bibliotheca Alexandrina is a modern reconstruction the Great Library of Alexandria. Built between 1995 and 2002, this storehouse of knowledge holds over 2 million books and employs over 2000 librarians.

The exterior of the library struck me as being a giant “eye” with the curved exterior walls (eyelids) constructed of Aswan granite. The rough-hewn blocks are decorated with ancient languages. The “ocular surface” or roof consists of many glass panels all sloped towards the Mediterranean Sea.

As you walk through the courtyard running along the western periphery of the library, you are greeted by a bust of Alexander the Great. Unfortunately, I did not have time to visit the interior of the library, but I had the feeling that Alexander was directing me to go south along the Nile and learn more about Egypt. And who would dare to refuse a command like that?

A private tour to Alexandria from Cairo can be part of your Egyptian vacation. I booked my complete vacation package through Egypt’s Best Day Tours.

If you travel to Alexandria independently you will require a taxi to reach the sites.

Fort Qaitbey is located on the end of the breakwater at the east side of the harbor. Admission is 60 Egyptian Pounds.

The Bibliotheca Alexandrina is located at 63 Shar’a Soter. 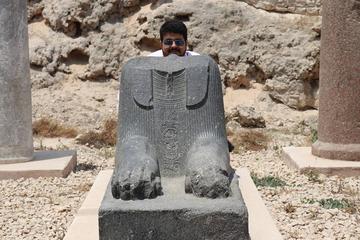 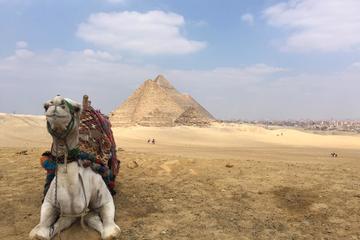