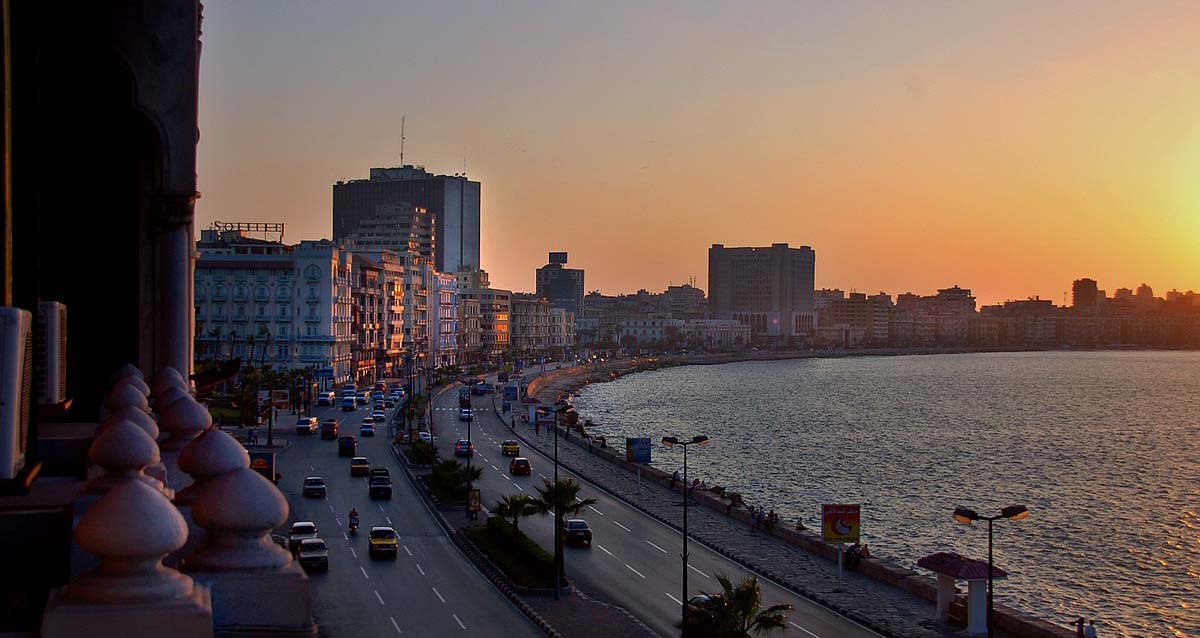 I had always dreamed of visiting Alexandria, the fabled city on the Nile delta established by Alexander the Great back in 332 BC. While I was researching my novel SHADOW OF THE LION, I delved into the history of this remarkable city. When I was invited to Egypt last March on a travel writer’s press trip, I told the organizers about my novel and the research I had done about the founding of the ancient city. Because of this I was given a special two-day tour of Alexandria, with an escort of three handsome Egyptian men, one of the highlights of all my travel experiences.

Alexandria is a setting in the story. Ptolemy, Alexander’s illegitimate half-brother returned to Egypt after Alexander’s death to oversee the building according to Alexander’s wishes. Ptolemy Soter became the first of the Ptolemaic dynasties of Egypt that lasted up until the era of Cleopatra.

It is said that Alexander had a dream in which he recalled the lines from Homer’s Iliad of an island, Pharos, by the surging sea.’ Alexander had come to Egypt to drive out the Persians and to him, this dream was an omen. He wanted to build a new city by the sea, and chose this location near a small village called Rhakotis. He ordered his architect and city planner Dinocrates to design and build it but Alexander died before its completion. After Alexander’s death, Ptolemy hijacked the funeral carriage when it was being transported from Babylon to Macedon and brought the body to Egypt where, it is said, Alexander had wanted to be buried. It was interred first in Memphis, then when the temple for Alexander’s friend Hephaestion was completed, Ptolemy had Alexander’s body laid there where it remained at least until the arrival of the Romans, because it was visited by Julius Caesar and Cleopatra.

Under Ptolemy, Alexandria became a center of Hellenism. It was the home of many Greeks and also home of the largest Jewish community in the world. It took over the trade and commerce of Tyre between Europe and the Arabian and Indian East and soon expanded until it was the largest city in the world, second only to Rome. Over the years, Alexandria was visited by Julius Caesar, Mark Antony, Nelson, Napoleon, and was home of others such as Archimedes, Euclid, Mohammed Ali Pasha and the Greek poet Cavafy.

The ancient Greek city had three regions, The Brucheum, Royal or Greek quarter which formed the most magnificent part of the city. The Jewish quarter formed the northeast and Rhakotis, occupied mainly by Egyptians. The city consisted of the island of Pharos which was joined to the mainland by a mole nearly a mile long. There stood the famous Great Lighthouse, one of the Seven Wonders of the World, 138 meters high, a project begun by the first Ptolemy and completed by his son. The lighthouse was destroyed by an earthquake in the 14th century and was replaced by an Arab fortress using some of the original bricks. 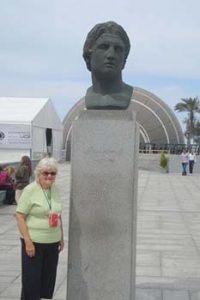 I was curious to learn how much of Alexander still exists in Alexandria, the city named for him. As the van approached the outskirts the first thing I saw was a monument of Alexander riding his horse. At our first stop we were greeted by a young tour guide, Sarah, who showed us around an extensive excavation known as Kom al-Dikka, which has revealed many Roman era ruins including a theatre. We didn’t have time to visit the catacombs which are located near Alexander’s best-known monument, ‘Pompey’s Pillar. The catacombs, known as Kom al-Soqqafa, are a multì-level labyrinth reached by a spiral staircase where there are dozens of chambers with sculpted pillars and statues, burial niches and sarcophagi.

Our next stop on the tour was the Qaitbay Citadel, built on the site of the ancient lighthouse, and established in 1477 AD by the Sultan Qaitbay. It was one of the most important defensive strongholds on the Mediterranean coast.

Unlike Cairo which is densely packed between the Nile River and the vast expanse of Sahara desert, Alexandria sprawls out along the seacoast, a sparkling bright city surrounded by the verdant Nile Delta, the ancient’s ‘Land of Goshen’. It is the second largest city in Egypt. The city is divided into six neighbourhoods, each with a large population. Alexandria is an important industrial area and Egypt’s largest seaport with two harbors, one facing east, the other west. There is evidence of the ancient harbour on the edge of the island of Pharos, but little else remains except what the underwater archaeologists have discovered under the sea. Some of these finds can be seen in the Alexandria Museum and on display outside of the new Alexandria Library.

The Alexandria Museum contains a number of exhibits dating back to the Ptolemaic dynasty as well as Roman. What I found most interesting were some of the relics that have been brought up by the maritime archaeologists in the harbor which reveals details of the city both before Alexander’s time and during the Ptolemaic dynasty. Where is Alexander’s tomb? Most likely at the bottom of the sea. Evidently they have discovered parts of Cleopatra’s palace and in the front of the new library is a tall weather-worn statue of one of the Ptolemys brought up from the seabed.

After my tour of the Roman ruins and museum, I was taken to my hotel by the seaside, surrounded a beautiful 350 acre park of palm trees and flowering bushes, the Montazah Palace Gardens. The elegant Helnan Palestine hotel is on the grounds next to what was King Farouk’s summer palace. Farouk became king at the age of 16 and lost his throne at the age of 32 in 1952. The hotel was built in 1964 to accommodate the Arab Kings and Heads of States participating in the Second Arab Summit in Alexandria. Members of Royal families and Presidents have stayed there. This made my visit even more special to know I was on royal territory. 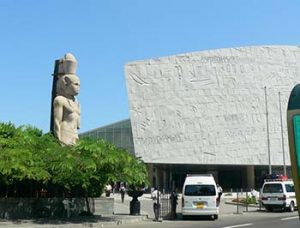 The next day was the highlight of my visit when I was taken to the New Alexandria Library, the Bibliotheca Alexandrina, which opened Oct. 16, 2002. It’s an immense cylindrical shaped modern structure separated from the University of Alexandria by a wide concourse where I posed under a bust of my hero, Alexander. The library is spectacular in its design with constant light filtering through the specially curved domes. It houses over 8 million books.

The first Library of Alexandria was created by Ptolemy I Soter in the 3rd century BC. Most of the books were papyrus scrolls on great value. It was dedicated to the Muses and functioned as a major center of scholarship. Many of the most famous thinkers of the ancient world studied here. It was in Alexandria where Euclid devised geometry and Herophilus discovered that the brain, was the seat of thought, not the heart. A wealth of works from the classical world were housed in the old library, including those of Aristotle and Plato, original manuscripts of Sophocles, Aeschylus and Euripides, Egyptian treatises on astronomy and medicine; Buddhist texts, original Hebrew scriptures and many of the works of the lyric poet Sappho.

In 48 BC when Julius Caesar laid siege to the city, a fire was set and the library was partially destroyed. Later there were other attacks until finally the library was in ruins and thousands of ancient works were destroyed. I wondered what Ptolemy would think now, if he saw this amazing work of art which has replaced the library he first created.

The new library features a museum dedicated to science and history. There is also a large planetarium at the entrance. There are all the modern amenities such as Internet Archives, several specialized libraries, academic research centres and various permanent exhibits. It is also the home of several institutions including The Arabic Society for Ethics in Science and Technology, the HCM Medical Research, the Anna Lindh Foundation for Dialogue Between Cultures and many others.

There is an international spirit in the Bibliotheca just as there was back in Ptolemy’s time. Italians and Egyptians work together preserving rare manuscripts; Greeks help with antiquities; French are in charge of the science museum and Americans are the computer experts.

The famous burning of the ancient Library of Alexandria became the symbol of the irretrievable loss of knowledge, but the new Bibliotheca Alexandria has revived that legacy and the staff works together to maintain this great Temple of Learning.

Not only was this two-day visit to Alexandria, one of the most memorable times of my visit to Egypt, but I enjoyed the company of my Egyptian travel escorts and especially the lovely young woman who was my tour guide, Sarah Ibrahim. I felt such warmth from her that we immediately bonded. She had read all about me on the internet and knew an amazing number of stories about me from my blogs. So I would certainly love to return there someday to see my new friend and visit more of this wonderful country that is so rich with history and its warm, friendly people.

The library of Alexandria

About the author:
Ruth had always dreamed of visiting Egypt, and in 2014 she was offered a press trip to that amazing country by the Canadian Egyptian Tourism. The tour included all the major sites such as Karnak, Giza and the Red Sea area and when the tour operator learned of Ruth’s novel SHADOW OF THE LION, part of which takes place in ancient Alexandria, she was offered a special trip to that amazing city. It was probably one of the most memorable trips she has ever made!

Ruth’s novel, the story of the fall of Alexander the Great’s dynasty, is available on Amazon.com in two volumes: Shadow of the Lion: Blood on the Moon

. It is also available in full on Kindle ebook SHADOW OF THE LION. Check out Ruth’s travel blog.