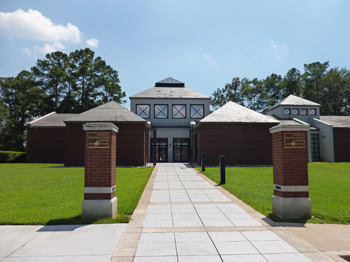 Andersonville National Park is a somber place to visit. If you go late afternoon during the middle of the week, as I did one sunny August day, the park is eerily quiet and still. Instantly you feel the weight of history: it is sacred ground.

I had been driving along the Antebellum Trail in Georgia for several days, and after resting for a couple of nights in Atlanta, I drove down to Andersonville via the beautiful town of Macon. Andersonville, a former Prisoner of War site for Union soldiers, currently sits on Highway 49, almost in the middle of nowhere. The drive is worth it, though. The park operates the National Prisoner of War Museum, a unique and fascinating place that is designed to resemble a prison itself: inevitably, I felt a sense of foreboding when entering the building. The museum teaches the visitor the meaning of a POW and what it means to live behind enemy lines. It is dedicated to the half a million Americans, men and women, who were POWs in all conflicts since the American Revolution. During the Civil War, 220,000 Confederates and nearly 127,000 Unionists were held as POWs, bringing the total to nearly 347,000 people. To put that in perspective, more soldiers were held as POWs in the Civil War than in World War Two. The museum displayed the key to one of the prison gates, a powerfully blunt reminder of the entrance to a place with so much horror and death. 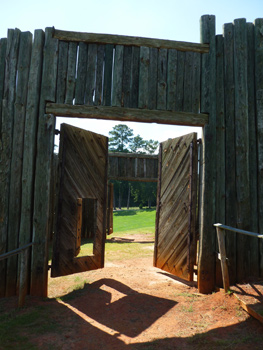 Andersonville was originally named Camp Sumter. It was built in early 1864, as Confederate officials wanted a larger space to house thousands of federal prisoners from Virginia and Georgia. In its short life, the camp confined 45,000 soldiers. Over 13,000 died from starvation, disease, overcrowding and poor sanitation. Half of all Union prisoner deaths occurred at this horrific site. From February, four hundred Union soldiers arrived every day and by the end of June, 26,000 men occupied a space that was originally designed for 10,000. One of the first stops was the entrance to the North gate. You can walk up the hill and follow the footsteps of where Union soldiers entered the prison for the first time. This was an incredibly powerful experience. One soldier exclaimed on his arrival, “is this hell?” I stood there for a while, trying to imagine the sights and smells those soldiers faced. Of course, nothing I could imagine would come close: people complained about the stench of the prison ten miles away. At its height, 130 prisoners died every single day. It was such a high rate that coffins could not be built fast enough. Instead, bodies were dumped in mass graves. Opposite the North gate, there stands a large empty field, originally the place where the prison hospital stood. Many soldiers refused to go, knowing they would never come out. Now all you can hear is the wind rustling through the tall grass. 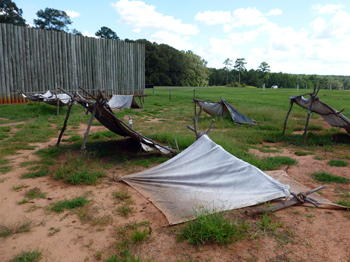 As the circular loop goes round, the last stop informs the visitor about sheltering the prisoners. The Confederate army could not supply adequate food or clothing, and soldiers were expected to make their own tents out of any material they could find, a small sheet or ripped trousers which was meant to protect them through rain or shine. Many had no shelter at all. Unsurprisingly, it was a “hell on earth.”

When Union General Sherman came close to marching in the area, the Confederates moved the soldiers to other prisons in Georgia. The camp commandant, Captain Henry Wirz was the only man to be executed for war crimes after the Civil War had ended. He was charged with conspiring with officials “to impair and injure the health and destroy the lives…of federal prisoners.” He was hanged on 10 November 1865. A monument to him still stands in the town of Andersonville, designed by the Daughters of the Confederacy. 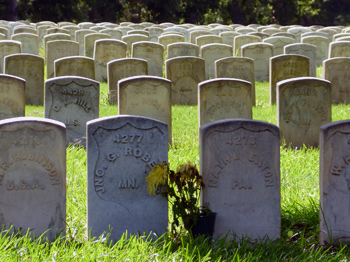 A national cemetery was established at Andersonville in the summer of 1865. During the Camp’s operation, prisoner Dorence Atwater was assigned the task of recording the soldiers who died for the Confederate officials, but unbeknownst to them, Atwater kept a second copy for himself. After the War, Atwater wanted to give the Union prisoners a proper burial, and when the federal government spurned him, he enlisted the help of Clara Barton. A heroine of mine, Barton founded the American Red Cross and nursed thousands of men during the War. Atwater and Barton identified over 12,000 soldiers buried at Andersonville. There are over 500 unknown soldiers buried in the cemetery, something I have always thought of as a cruel twist of fate since visiting the First World War battlefields of France. Today, Andersonville is still an active cemetery (active in the sense that soldiers can choose to be buried there) and the roll call presently stands at 18,000.

It is impossible to look at these staggering statistics and not think that each represents an individual. An individual, who in the words of John McCrae’s World War One poem, “lived, felt dawn, [and] saw sunset glow.”

♦ Entrance Fee: Free. Andersonville is operated by the National Park Service. Visit the website for more information, and a map.
♦ The park grounds and National Cemetery are open daily from 8am-5pm, excluding bank holidays. The National Prisoner of War Museum is open daily from 9am-4.30pm.
♦ The main entrance to the park is on Highway 49; the Main Gate is signposted – visitors must use this route. Andersonville is roughly 60 miles from Macon or Columbus, depending on which direction you are coming from. Andersonville is slightly out of the way, so there are some nearby attractions listed on the website  (I was driving from Macon all the way down to the Gulf Coast of Alabama, so it was a perfect late afternoon stop for me).
♦ Plan to spend at least two hours there.

About the author:
Hannah graduated with a Masters Degree from the University of London last year, and since then she has been researching the life of former African American slave Frederick Douglass. In the summer of 2013, she travelled solo through the Deep South for six weeks. She drove over four thousand miles and visited roughly 80 historic sites, sampling the gorgeous Southern cuisine as she went. Hannah would love to take people on the same trip and share with them the weird and wonderful places she came across. Hannah has created a website on Frederick Douglass in Britain and is due to start a PhD in September 2014. She has written about some of her travels on her blog, astudentofclio.blogspot.co.uk

All photos are by Hannah Murray:
The POW Museum
The gates of hell – the entrance to the prison
Reconstructed prisoner shelters
Andersonville Cemetery