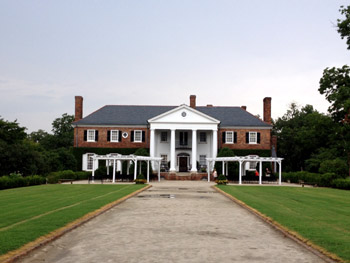 As a British person travelling in the Deep South, a new world of history, food and adventure lay before me. I wanted to see as many historical sites as possible within my six-week trip, and Boone Hall Plantation was in my top five places to see. Unfortunately, I arrived in the pouring rain. Some Americans think that it rains constantly in Britain, but I have never seen anything like the torrential downpours of the Carolina coast. For when it rains, the heavens open, and rivers form within roughly three minutes.

“Have you got an umbrella?” the ticket man asked me as I pulled up at the entrance. Having driven from Myrtle Beach, where it was very hot and sunny. I was wearing a maxi dress and sunglasses and must have looked a prize idiot. “Um, no I don’t. I’m hoping it’s going to stop soon,” My voice trailed away as the man looked at me pitifully. “Enjoy your visit.”

So the infamous drive I had been waiting for, the alley of oak trees leading to a spectacular mansion, took place in heavy rain. Not exactly what I had in mind. After a quick change in the back of my car (classy) I ran to the house and sat on the porch waiting for the rain to stop, which thankfully it did after an hour or so. I booked a house tour and a place on the Gullah presentation, and to kill time I read about the property and explored the slave cabins. Boone Hall began its colourful history in 1681 when Major John Boone, an Englishman, decided to settle in Charleston. The house has seen many different owners, including a German family that began a brick business, but since 1955 the McRae family have owned the estate, and it was their decision to open up the house for guided tours. 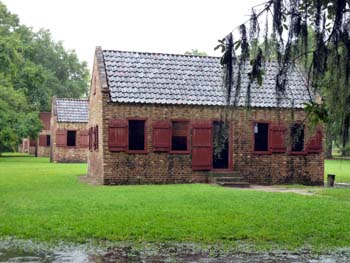 I walked over the waterlogged ground to the nine slave cabins that were in the front yard. The cabins are made from brick, which is incredibly unusual for the time because most were made out of wood. Visitors would have seen these cabins first before the main house, and the reasoning was that if the slave cabins were made from brick, you knew you were entering a wealthy plantation. Each cabin would have housed between 6-12 people, mainly house slaves as the field slaves would have lived in wooden cabins in the fields. (There was a hierarchy among the enslaved, and you were considered ‘higher up’ on the scale if you worked in the house.)

On this particular plantation, long grain rice was grown and produced by the enslaved population. This area of South Carolina was famous for rice and cotton, and many plantation owners earned thousands by selling their goods across the country, and beyond. For example, in Liverpool, England, 90% of imported cotton came from the South. Depending on the crop and the plantation owner (or overseer if the owner was away on business), the slaves would work from dawn until dusk in the sweltering heat. A slave was seen as property, and often a slave in their 30s with a particular skill (for example, a carpenter) could reach $1800 on the auction block. If a plantation owned 100 slaves…well you do the math. Slaves were allowed one set of clothes per year, and one day off a week or sometimes once a month; again this varied from plantation to plantation. 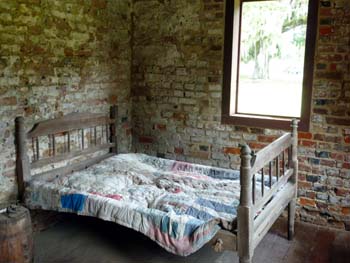 In each cabin, there was a small exhibition on the life of a slave and what happened to them after the Civil War. Quotes by Frederick Douglass, the fiery abolitionist William Lloyd Garrison and former slave Harriet Tubman adorned the walls. Tubman, my personal heroine, declared “there is either liberty or death, and if I can’t have one, I will have the other.” Standing in those slave cabins was the most surreal moment of my life so far. I had read about slavery for five years, imagined what life must have been like for a slave living in the heart of South Carolina, or in the humidity of Louisiana, but nothing came close to standing in that cabin, feeling the marks of fingerprints on the walls, and looking out of the window to stare at the alley of oak trees. Feeling the dust beneath my feet and staring at the broken pieces of glass, animal bone and metal. What would the enslaved have experienced within these walls? Loss and sacrifice. Heartbreak and death. Love and defiance. Survival. These slave cabins bridge the gap between two completely different worlds. We may never be able to recover the memories or the stories that scream to be heard, but the cabins stand as strong and silent testimony to those that lived and worked here. It was an incredibly moving experience, and one that I shall never forget.

I became so enthralled by the cabins I very nearly missed the Gullah presentation, led by an fascinating man and his small grandson, who played the drums for us. The Gullah are descendants from African slaves, and their language has influenced society for generations. The Gullah culture focuses on ancestors, and whereas we might say “our guardian angel was looking out for me today” someone who believed in the Gullah way of life would say “my great grandfather was protecting me today.” In the Gullah culture, no one dies per se: they merely ‘pass on’ to the next life (which is why we say somebody has “passed away.”) The Gullah people in South Carolina have preserved their religion, culture, and skills, passed down through the generations. Basket weaving is particularly important, and I found so many beautiful and colourful examples later on in Charleston.

After the presentation I rushed to the ‘Big House’ for my tour, an elegant home that is still lived in. Unfortunately, you were not allowed to take photographs, and the tour was confined to the library, the study and the dining room. Little was mentioned about the role of the slaves within the house, but the tour was interesting nonetheless. It was beautiful, although not as grand as some of the plantations you will find in Louisiana. Perhaps that is a good thing, depending on your taste. And so concluded my powerful trip to Boone Hall. I made my way to the car park, which now resembled a small river, and carefully drove down the alley of oak trees, this time in the sunshine. The best destinations are those that stir the soul, pull at the heartstrings or blow us away with their beauty. For me, Boone Hall managed to do all three. 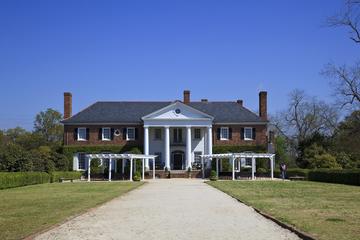 Boone Hall is located roughly 10 miles from downtown Charleston, so if you’re travelling towards the city from the North it’s a great place to stop.

Make sure you book a house tour and a ticket for the Gullah Presentation in the Information Office (around 30-45 minutes each). Talks at the slave cabin occur hourly. If mobility is a problem, the house organises a coach tour to take you around the site (lasting 40 minutes). 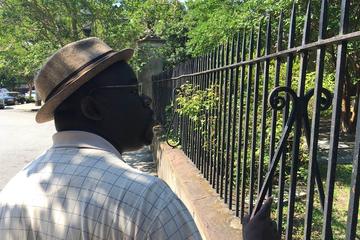 All photos are by Hannah Murray:
The plantation house
Slave cabin
A bed inside one of the cabins

About the author:
Hannah graduated with a Masters Degree from the University of London last year, and since then she has been researching the life of former African American slave Frederick Douglass. In the summer of 2013, she travelled solo through the Deep South for six weeks. She drove over four thousand miles and visited roughly 80 historic sites, sampling the gorgeous Southern cuisine as she went. Hannah would love to take people on the same trip and share with them the weird and wonderful places she came across. Hannah has created a website on Frederick Douglass in Britain – sites.google.com/site/frederickdouglassinbritain and has written about some of her travels on her blog, astudentofclio.blogspot.co.uk