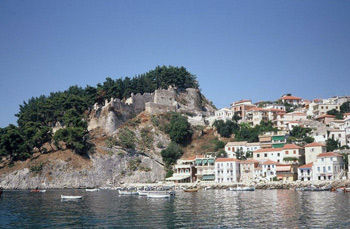 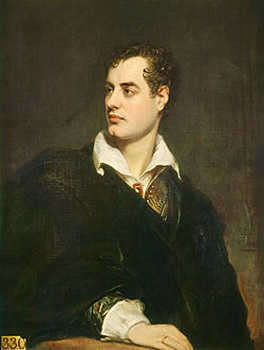 At the corner of Lysikrattis and Vironos Streets in Athens Plaka, stands a choreographic monument awarded to a choir at a Festival for Dionysos in ancient Athens’ Dionysos Theatre. Once, next to this monument, the last of its kind in Athens, was a French Capuchin convent. The poet, George, Lord Byron, stayed here when he was in Athens. At that time, the panels between the columns of the monument had been removed, so Byron used it as his study and wrote part of Childe Harold here in 1810-11. This was once the theatre district of ancient Athens, so it seemed appropriate that the flamboyant poet should choose to spend his time there. In Greek, “Vironos” means “Byron” and this is Byron’s street. I used to live there and spent much of my leisure time at the little milk shop, now a posh coffee shop, at that corner. The convent was destroyed in a fire, but there’s an inscribed monument on the spot where it once stood honouring Byron. His presence always seemed near. 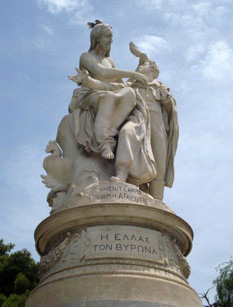 The street adjacent, is Shelley Street, named for his poet colleague Percy Bysshe Shelly who tragically drowned in Italy. Both poets are honoured in Greece, especially Byron, who became a national hero when he joined the Greek resistance movement during the War of Independence.

While in Athens he often lodged with a widow, whose daughter, Theresa Marcri is celebrated in his poem The Maid of Athens. The house where he lived in the district of Psiri at Odhos Pyias Theklas, is marked with a plaque. There are traces of him in various locations. If you visit the Temple of Poseidon at Sounion you will see his name carved in the marble steps. Sunium’s marbled steep, where nothing save the waves and I may hear our mutual murmurs sweep.

I have visited many of the places where Byron lived and can understand how the beauty and serenity of the Greek landscape inspired him. Byron wrote many poems about Greece including the famous “Isles of Greece”

The isle of Greece! The isles of Greece!
Where burning Sappho loved and sung,
Where grew the arts of war and peace, —
Where Delos rose and Phoebus spring!”

Byron first visited Greece in 1809, landing in the town of Parga. From there he went north to Ioannina where the infamous Ali Pasha held sway. While there he visited the Pasha who had an even shadier reputation with women than the poet. Ali Pasha, like Bryon, also appreciated beautiful young men. He was enchanted by Byron, noting his delicate small ears “the mark of good breeding”. It was during his stay in Ioannina that Byron began his autobiographical narrative poem, Childe Harold’s Pilgrimage, which commemorated his meeting with Ali Pasha who had lavished hospitality on him. Byron knew though that behind Ali’s deceptively friendly countenance were “deeds that lurk” and “stain him with disgrace”. Athens. While at Ioannina he loved to swim out to a small island in the lake. In spite of being born with a club foot, Byron was a skilled swimmer and once swam across the Hellespont from Troy. To this day they hold swimming meets there to remember him.

Yet are thy skies as blue, thy crags as wild;
Sweet are thy groves, and verdant are thy fields,
Thine olive ripe as when Minerva smiled,
And still his honey’d wealth Hymettus yields;
There the blithe bee his fragrant fortress builds,
The freeborn wanderer of thy mountain-air;
Apollo still thy long, long summer gilds,
Still in his beam Medeli’s marbles glare:
Art, Glory, Freedom fail, but Nature still is fair.”
– Childe Harold’s Pilgrimage

Byron traveled the country extensively often visiting the islands. On Lefkada (Levkas) Childe Harold saw the hovering star above Leucadia’s far projecting rock of woe”. This was at the site of ancient Leukadas, a precipitous cliff 200 feet high where there was once a Temple to Apollo. It was here, known today as “Sappho’s Leap” that the lyric poet Sappho tragically committed suicide by jumping off the cliff.

In 1823, apparently bored with his extravagant life in Italy, Byron sailed to Spain and Malta before finally returning to Greece. This voyage is detailed in his poem Sailing with Byron from Genoa to Cephalonia. From Preveza he went north to Parga 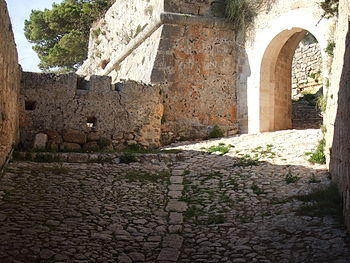 He lived for awhile on the island of Kefalonia (Cephalonia) in the tiny village of Metaxata, near Argostoli, where he enjoyed exploring the ruins of a Venetian castle at Ayios Yeoryios, once the Venetian capital of the island.

During his travels around Greece, Byron not only grew to love the country but was also impressed with the moral tolerance of the people. He became involved in the rebellion against the Turks, joining forces with Alexandros Mavrokordatos, the leader of the forces in western Greece to take part in the War of Independence. In spite of Byron’s lack of military training, together they planned to attack the Turkish-held fortress of Lepanto at the mouth of the Gulf of Corinth. The Greek struggle against the ruthless Turks was supported by many intellectuals and poets like Lord Byron who volunteered to fight and become leaders of the revolution. They were known as the Philhellenes (friends of the Greeks). Although many became disillusioned by the pettiness and greed of the Greek klefth leaders others, like Bryon, took up the cause, arriving in Messolonghi , a squalid little port on the Gulf of Corinth, the western outpost of the resistance movement against the Ottomans. He was greeted with a 21 gun salute. In spite of despairing “in this realm of mud and discord” he donated 4000 pounds of his own money to prepare the Greek fleet for sea service and employed a fire master to prepare artillery as well as paying the Souliot soldiers who were reputedly the bravest of the Greek resistance fighters.

On Suli’s rock, and Parga’s shore,
Exists the remnant of a line
Such as the Doric mothers bore:
And there, perhaps, some seed is sown,
The Heracleidan blood might own.
Trust not for freedom to the Franks —
They have a king who buys and sells;
In native sword and native ranks,
The only hope of courage dwells:
But Turkish force and Latin fraud
Would break your shield, however broad.”

During the spring of 1824, Byron fell ill but continued to carry out his duties. During his recovery he was unfortunately caught in a rainstorm and came down with a violent cold. Unfortunately this was aggravated by the bleeding insisted on by the doctors which may have caused sepsis. He slipped into a coma and died on April 1824 at the age of 37.

The Greeks considered him a hero and buried his heart at Messolonghi where there is now a small museum containing Byron artifacts. He remains were sent to England but refused burial in Westminster Abbey and were instead placed in the vault of his ancestors new Newstead. It wasn’t until 145 years after his death, that a memorial to Byron was placed on the floor of the Abbey.

In Greece, he was still revered, and a beautiful monument to him held in the arms of an angel who stands at the edge of the National Garden in Athens. Each time I’m in Athens I visit it and think of the life and poetic words of this exceptional and intriguing man of literature. 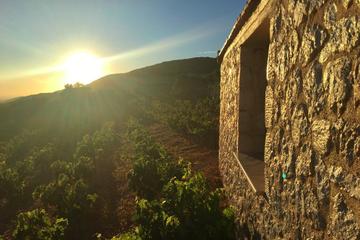 THE MESSOLONGHI BYRON SOCIETY
MESSALONGHI: The house where Byron lived was destroyed in WW II and there is a small memorial garden at the site. There is a small museum devoted to the revolution on central Platia Botsari (Mon-Fir 9 am – 1.20 pm and 4-7 pm. Sat & Sun 9am – 1 pm & 4 -7 pm. There is a small collection of Byronia on the ground floor. In the Kipos Iroon (Garden of Heroes) there is a statue of Byron beside the tomb of Souliot commander Markos Botsaris, erected in 1881. 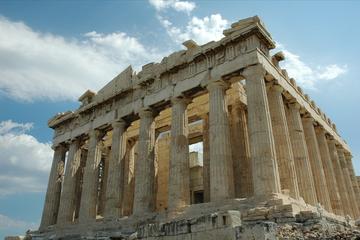 WEB SITES ABOUT BYRON IN GREECE:
The Greek Revolution of 1821
Lord Byron; The Life of George Noel Gordon – Facts & Information
Greece hails Lord Byron a hero and dedicates a day of celebration in his name

About the author:
Ruth lived on Lord Byron’s street (Odos Vironos) for several years and has traveled to many of the poet’s sites in Greece. She is a travel and historical fiction writer. Her novel SHADOW OF THE LION, about the fall of Alexander the Great’s dynasty, will be published in UK in 2014. www.ruthkozak.com