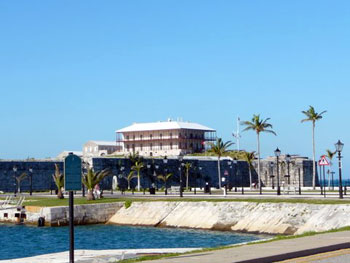 Serendipity! An invitation to Bermuda! I could continue my voyage of discovery – following the journey of the Thunderbird flying from the mast of HMCS Quesnel, the corvette that served in the Battle of the Atlantic during World War Two. This mascot written about elsewhere on this web-site (The Mystery of our History – Discovering Alert Bay) began its war service near the waters of Vancouver Island, when it was seized off the “Namgis Burial Grounds” of the Kwakwaka’wakw First Nation at Alert Bay, a village on the edge of tiny Cormorant Island. Some exuberant young sailors living in the moment that fateful year of 1942 grabbed this grave marker and ran with it. It subsequently perched high aboard HMCS Quesnel until the war’s end in 1945. One of its destinations during its perilous ocean journey had been Bermuda. Would I find any trace of its visit there on my trip – an adventure that had fallen into my lap?

Beginning its travels down the West Coast of North America from Esquimault the Thunderbird was to puff and pant through the hot humid Panama Canal and up the North American east coast finally reaching Halifax. Evolutions or war games were the reason for voyages from there to the RCN base in Bermuda. My trip to Bermuda was by air and there had been many changes during the intervening sixty-five years since the war.

Our plane swooped past St. David’s Lighthouse and landed on St. David’s Island, one of the many islands of Bermuda and home of the couple that hosted us. We were met by Lulu who drove us to her and Richard’s home nestled below an Anglican Church rising up on the hill beside their lane. Settling wearily into the comfortable chairs on their veranda we were serenaded by the strange sound of tree frogs – a sound that was constant during our time there. 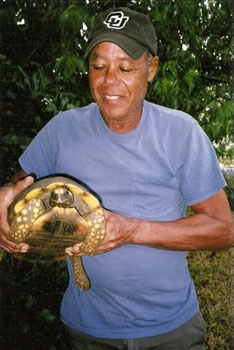 Richard, a Bermudan from many generations’ back was a gold mine of information. When I told him about my quest to learn more about the Thunderbird his face lit up as he said “You will have to go down to the dockyards. Down there on the sea wall sailors have painted images from crests of numerous ships.” The badge for HMCS Quesnel had the image of a Thunderbird on it and I could not wait to go to the dockyards. Would I really see that kind of evidence there?

We wound along the long, narrow streets through the islands for an hour until we reached the tip or hook on the extreme west and north end of Ireland Island where the dockyards were located. We walked up and down questioning old sea dogs and along the way we peered at the images painted on the wall. Although we saw many designs and symbols the Thunderbird was not to be found. Since a war was being fought at the time of its abduction it was unlikely that the sailors of that era would be spending their time painting pictures.

Pursuing my interest in Bermuda military history, one of the highlights of our visit was an International Military Tattoo. Back to the dockyards where we would attend the tattoo. The dockyards had officially closed in 1951 leaving the vestiges of the old stone prison which had once held prisoners from the Boer War in South Africa and Irish prisoners that the British had shipped to the colony, the first colony of the British Empire. Two hundred years after the 1609 founding of Bermuda slave laborers and convicts were pressed into service to build in the dockyards constructing wharves, outbuildings, barracks and a massive fortified keep well stocked with gunpowder. The Commissioner’s House and the Maritime Museum held vast amounts of Bermuda’s history.

The tattoo was held in the Keep Yard of the Royal Naval Dockyard and it was a wonderful evening under the Bermuda sky. Bands from the Azores, Barbados, England, Scotland, USA and Canada performed. When the Cameron Highlanders of Ottawa marched and piped the announcer explained that this band perpetuated the 38th Battalion, Canadian Expeditionary Force, which had been in Bermuda in 1915 and 1916 during World War One and had performed at official functions there. He added that it is ‘most fitting the bands of the Guards (the Governor General’s Foot Guards in Ottawa also performed) and Cameron’s are participating in the Bermuda Tattoo 2009, commemorating the 400th anniversary of continuous settlement.’ As they piped their way out he repeated “We are so glad to have you back. We are so glad to have you back” in keeping with the spirit in their medley “Ye’ll tak the high road” “Will ye no come back again’. Quite a welcome for a Canadian visitor! 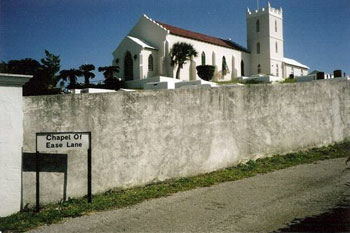 “Was their indigenous history in Bermuda?” I wondered. Did the Thunderbird connect with First Nation’s people? I learned that Bermuda was uninhabited when the Sea Venture sailing from London wrecked there in 1609. It had wrecked on “the dreaded Bermudas, known as the ‘Isle of Devils’, supposedly inhabited by demons and evil spirits.” A sailor on the Sea Venture recorded “nothing but gusts, stormes and foule weather” and they would have avoided Bermuda “as they would shun the devil himself.” Thus the settling of Bermuda began and was followed in later years by indentured servants and slaves from Africa. The stone prison in the dockyards and exhibit at the Commissioner House of the slave trade and slavery in Bermuda tells their story. The latter is an ‘Officially Designated UNESCO Slave Route Project’.

Lulu related how the Pequot Indians had been brought to Bermuda from Connecticut and enslaved. To commemorate this history of 1637, the people on St. David’s island who are descendants of the Pequots celebrate an annual event called Schemitzun. Their lost brothers and sisters from the eastern USA join them. Part of the celebration is a POW WOW in the cricket field. The Bermuda Gombeys whose colorful regalia are reminiscent of Africa and North America’s first peoples, perform for special events and holidays portraying various roles and characters. They danced their unique step to the rhythm of drums at the Schemitzun and the history is re-lived on St. David’s Island. 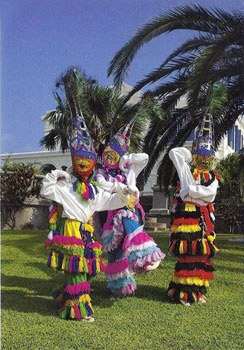 HMCS Quesnel had anchored in St. George’s harbor during part of its stay there in the 1940’s and I was anxious to go to this island in the oldest part of Bermuda. As we motored through the harbor in Richard’s boat we could see the re-enactment of the medieval dunking stool at King’s Square in sight of a replica of the Sea Venture. Like the unlucky soul who was dunked in the water from this stool we also soaked up the old history on this Island and traveled back in time.

Further east in the harbor, we boated past Convict Bay where the Royal Canadian Navy had its base in 1944 and 1945. The British had used obsolete warships as floating prisons here in the late eighteenth and early nineteenth centuries. Hence the name Convict Bay. As we cruised by I pondered HMCS Quesnel having anchored here and its mascot’s panoramic view of this historic spot.

Nearby Fort St. Catherine’s had been used as a submarine listening post during World War Two. Bermuda, the Gibraltar of the West or the Gateway to the Caribbean had been heavily armed and well fortified and the gun at Fort St. Catherine’s Museum was evidence of this. St. George, Bermuda’s oldest town was settled in 1609 – 1610 and became a World Heritage site in 2000. St. Peter’s Church is the oldest church in the Western Hemisphere. 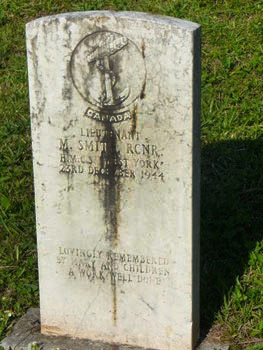 We had one last stop – the grave site of Murdo Smith R.C.N.R. a commanding officer of the Quesnel. ‘Red’ Smith was a colorful Scottish Presbyterian, who was violently opposed to the Thunderbird in the mast. He considered it idol worship. He died in Bermuda two days before Christmas on December 23, 1944 and is buried at the Royal Naval Cemetery on South Ireland Island. We visited his grave site and thought about the veterans who had endured the hardships of World War Two and the Battle of the Atlantic sixty-five years ago. There are thirty-four World War One veterans and thirty-nine World War Two veterans buried there. Murdo Smith’s death was reported in The Royal Gazette and Colonist Daily, stored in The Bermuda National Public Library in Hamilton, on Wednesday, December 27, 1944.

The Thunderbird was captured by young sailors, who recognized the power of this symbol prevalent in North American First Nation culture – a symbol that gave them courage during The Battle of the Atlantic. Three centuries earlier the Pequots were captured and taken as slaves. Half a century later in the awakening of the new millennium the sailors and their descendents have been searching for the Thunderbird hoping to return it to the ‘Namgis First Nation’ of the Kwakwaka’wakw people. The final voyage and resting-place of the Thunderbird is still a mystery. It made many more excursions in the icy north Atlantic but where did it end up in 1945? Will another serendipity occur to bring this story to a conclusion or will the enigma of the Thunderbird endure? 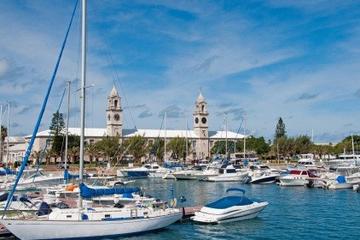 About the author:
Bev Lundahl is a freelance writer living in Regina, Saskatchewan. Most of her writing is based on years of genealogical research. She has been published in Canada’s History Magazine (formerly The Beaver), Saskatchewan Folklore, The Heritage Gazette of the Trent Valley (Ontario), Lifestyles (Estevan Sk), and The Regina Leader Post. Her research has been referenced on CBC Radio (As It Happens), The Trident (Navy Newspaper, Halifax), The Halifax Chronicle Herald & The Victoria Times Colonist. She can be reached at bev.lundahl@accesscomm.ca