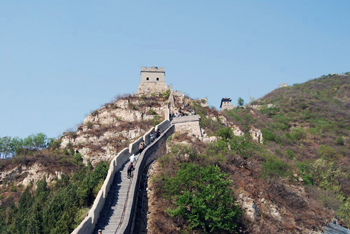 “This mighty wall of four score miles in length is only exceeded by the Chinese Wall, which makes a considerable figure upon the terrestrial globe, and may be discerned at the Moon” wrote antiquarian William Stukely, in the mid-18th Century, when he visited Hadrian’s Wall, in northern England.

However, comparison of Hadrian’s Wall with the Great Wall of China is a bit fanciful for, although there’s some disagreement on the length of the latter, the length of the actual wall is at least almost 4000 miles long. This figure disregards the ditches and trenches, and natural defensive boundaries such as hills and rivers, which add a further 1500 miles to the total. 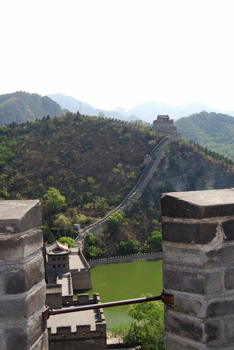 Claims of visibility from the Moon are fanciful, too. Several astronauts have stated that’s erroneous … but in the 18th Century, nobody had been to the Moon, so couldn’t contradict Mr. Stukely.

There had been defensive walls of some kind ever since the 7th Century BC, but not a continuous one. They generally surrounded the separate kingdoms, sometimes known as the Warring Kingdoms, of which the China of the day was made up. It wasn’t until 220 BC that the leader of one of these kingdoms, one Qin Shi Huang, united them, and declared himself the first Emperor.

Indeed, since Qin is pronounced ‘chin’, it’s not impossible that the name ‘China’ is derived from this gentleman.

One of his first decrees was that the walls defending the former kingdoms should be partially demolished, to impose his central rule, and to discourage any resurgence that might be considered. The remaining defences would be joined together to form one Great Wall, to deter any incursion from outside. This work was largely completed by 206 BC. 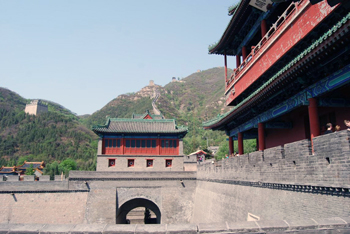 But, that early wall was not of the construction we’d recognise today. The wall builders generally used whatever resources were available locally … wood or stone, in areas in which it could be easily won; stamped earth where it wasn’t readily obtainable.

As a defence, it wasn’t really successful. It didn’t stop Genghis Khan, in the late 12th Century … he is reputed to have said that a wall is only as good as the courage of those manning it. But, it did make for effective communication, either by using the top of the wall as an elevated roadway, or by signals between the watchtowers.

When Marco Polo visited China in the late 13th Century, several people pointed out that he failed to mention the Great Wall at all; some even took it as an indication he’d never actually been to China, and had based his accounts on hearsay. But, it’s possible that, by this time, the earthworks had eroded to insignificance, and he just didn’t think them worth mentioning. 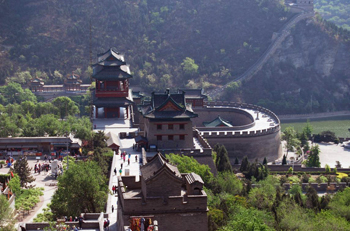 In fact, reconstruction of the wall as we know it now, didn’t commence until 1348 … over 20 years after Marco Polo’s death … when the Ming dynasty came to power. They were especially troubled by the raids of the Mongol tribes from the north, and, as a defence against these, the wall was strengthened, and, in some places, re-aligned.

In the time of the Emperor Qin, his capital was at Xi’an, where he is buried. By the time of the Ming dynasty, the capital had moved to Beijing, its present location, about 600 miles to the northeast.

So, the most fortified stretch of the wall was built to protect that city, and, these days, the best-preserved parts are easily reached from there.

This time, stone, bricks and tiles were used in the construction. From the top of the wall, guards could survey the surrounding land, and easily communicate with each other by way of watchtowers and signal towers. There were estimated to be about 25,000 of these along the wall’s length. 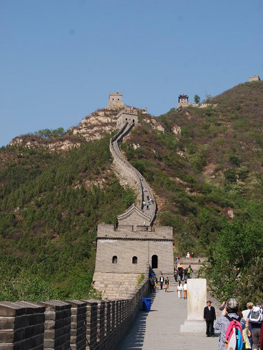 In addition, of course, barracks, stables and armouries had to be provided at frequent intervals.

In spite of these formidable defences, the wall was unable to prevent the invasion of the Manchus in 1644. This brought the Ming dynasty to an end, and established the Qing Dynasty, which ruled China until 1912.

It also extended the borders of China, to include Inner and Outer Mongolia, thus rendering the Great Wall largely superfluous.

Word, however, was starting to reach Europe about the Great Wall; several missionaries and explorers mentioned it in their accounts. But, it wasn’t really until the early Victorian era, when China opened its borders to foreign visitors, that the tourists arrived in any real numbers.

A problem was that the accounts they brought back were sometimes somewhat exaggerated; for many years, the myth persisted that the Ming wall was the same as that originally built by the Emperor Qin. 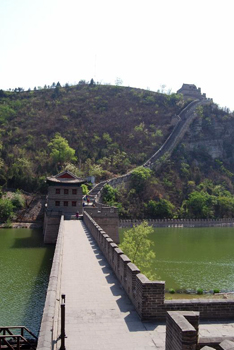 Naturally, the more easily accessible sections of the wall, especially around Beijing, were maintained and, if necessary, repaired. At least one guidebook grumbled that one stretch of wall ‘ … looked like it had been pointed yesterday’. It probably had.

But, if they wanted to see crumbling and overgrown, they only needed to go a little further afield, to where erosion, weathering and local people treating it as a quarry for ready-dressed stone have taken their toll.

The section we visited was at the Juyong Pass, where the wall, zig-zagging crazily over the hills, swoops down to cross a river, then almost immediately ascends again. It really is a picturesque place, with the ornate towers at frequent intervals.

Mao Zedong once said: ‘You cannot be a great man until you have walked the Great Wall’. That’s easier said than done here. The problem is not so much the steepness, but the awkwardly-sized steps … presumably, to slow down the enemy if they ever got to the top of the wall? I’m six feet tall, but found the going extremely uncomfortable.

So, I wonder if the few hundred metres I did manage qualify me for “greatness?” 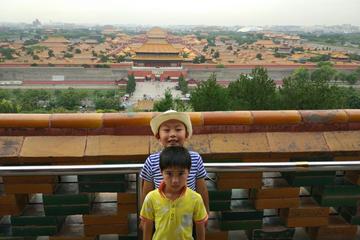 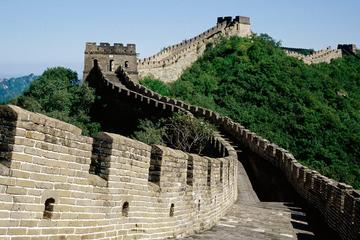 About the author:
Having written as a hobby for many years while serving in the Royal Air Force, Keith Kellett saw no reason to discontinue his hobby when he retired. With time on his hands, he produced more work, and found, to his surprise, it ‘grew and grew’ and was good enough to finance his other hobbies; travelling, photography and computers. He is trying hard to prevent it from becoming a full-time job! He has published in many UK and overseas print magazines, and on the Web. He is presently trying to get his head around blogging, podcasting and video. keith-kellett@tinyworld.co.uk.