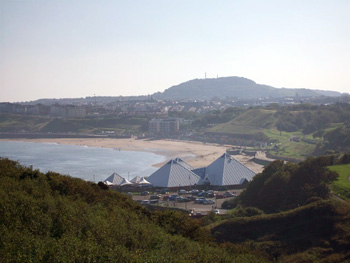 The terracotta roofs and gleaming walls of Robin Hood’s Bay buildings have always been a welcome sight, whichever way I’ve arrived. So I could relate to the four middle-aged male-hiker characters in the film, Downhill, who were finishing their 190-mile west to east Coast to Coast ramble from Saint Bees in Cumbria by walking down to the sea on vertiginous cobbled roads running parallel to streams flowing under flowering gardens, wooden bridges and atmospheric alleys.

I have walked down the hill from the north and inland, but the closest I have so far felt to emulating the Downhill hikers is by walking part of another trek; the Cleveland Way; from Scarborough in the south. It is a thirteen miles section of a 109 miles trek that mostly runs parallel with the North Sea. The walk is mostly flat, walking along countryside coastal paths, but occasionally it dips down to the beach. At Boggin Hole the cove is lined with trees, making it particularly picturesque. 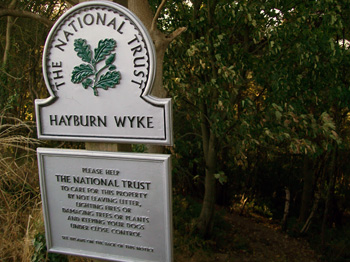 Arriving from the south, Robin Hood’s Bay is visible miles away; from a jutting limestone headland just past Ravenscar, one of a few villages on the walk. The approach to Robin Hood’s Bay at low tide is on a long stretch of sandy beach, with some rocks and pools along the way. The sea covers most of the beach at high tide; reuniting with the high cliffs in the evening like a blanket being tucked between bed and wall.

It is called Yorkshire’s Jurassic Coast, due to the high amount of fossils found in the area. Ammonites that lived 200 million years ago are commonly found, and occasionally the bones of marine reptiles from that era. Human artefacts have been found in the area from about 9,000 years ago. Star Carr, five miles south of Scarborough, is the best Mesolithic site in Britain, due to its boggy ground preserving artefacts usually lost elsewhere. Only stone tools usually survive from that time, but at Star Carr they have found twenty-one deer-head headwear and 200 antler spears. Romans, Angles and Vikings all landed and built settlements in the region, before it became part of newly created Yorkshire after the mid-11th century Norman Conquest. 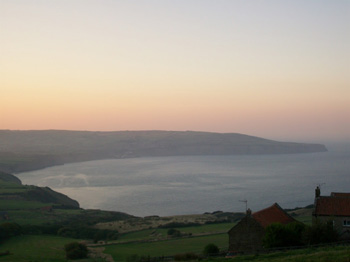 The age of Robin Hood’s Bay is unknown, as it was a thriving village of fifty cottages when first recorded in 1540 by Leland, King Henry VIII’s topographer. In the following century it was recorded on Dutch sea charts, which omitted Whitby; RHB’s now much larger northern neighbour. The origins of RHB’s name are also unclear, with no recorded reference to the famous outlaw of Sherwood Forest. That legend did become popular in the 15th century though, with the first recorded ballad dated to 1450, around the same time that the Yorkshire village was thought to be growing. If Robin Hood was the John Lennon of his time, then it seems likely that people would want to name things after him. However, the local history society believe it is more likely that the name derived from ancient woodland spirits, such as Robin Goodfellow, who preceded the now more famous Medieval rebel, and may have played a part in creating the green Sherwood Forest legend, rather than Hood influencing other contemporary things. 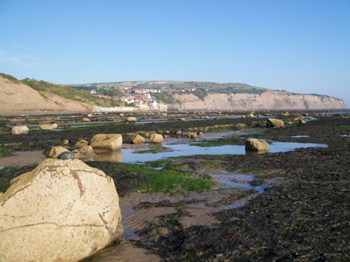 The area does seem to have thrived on independence from outside control and taxes, as the legendary Robin Hood did, with the local history society writing there is no doubt that Robin Hood’s Bay was the busiest smuggling village on the Yorkshire coast by the 18th century. That coastal culture was made famous in the Poldark books

and television series. I watched the original series as a child in the 1970s, and maybe that is why I have been so excited by Robin Hood’s Bay. I also first watched the Kidnapped film around that time, which is another seafaring story set in the 18th century. 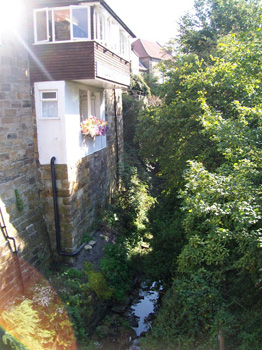 Smuggling was not the only activity dividing village and rulers, as on the other side there was something that looks even more evil in history: Press Gangs were sent into villages such as Robin Hood’s Bay to find and kidnap men for the Royal Navy. Those pressed into service were unlikely to return. It is easy to imagine the drama of the 18th century in the compact steep closely-knit village that still structurally exists, with contraband passed through windows from harbour to hilltop without touching the ground; or the women banging drums when Press Gangs were spotted, and the men running to hide.

While the Downhill end scene showed the harbour and Bay Hotel beer garden it missed the rest of the village, where bookshops and haberdasheries share the seafront approach with ancient pubs such as Ye Dolphin and The Laurel Inn. At the top of the village, The Victoria Hotel provides excellent views of the bay. 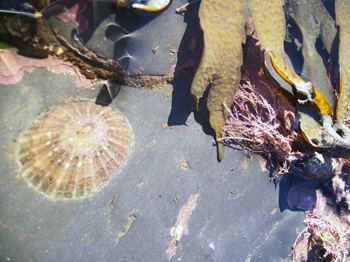 When I finished my walk from Scarborough I had to find the campsite a couple of miles farther north of the village. After stopping to take too many photos it was totally dark by then, but I was compensated by a clear night providing an amazing countryside view of the sky, after becoming used to inner city light pollution skies. Looking upwards at regular intervals for long periods of time delayed me further, but as Downhill showed, it’s not all about keeping to time, but what you see and learn along the way.

Last year, alerted by the Coast documentary series, I thought Staithes looked similar to Robin Hood’s Bay, so travelled up there on the last sunny warm day of the year. I took a bus from Leeds to Whitby, and a local bus from there. I was not disappointed, and felt a sense of deja vu walking down the hill to the harbour. Unfortunately, I didn’t have time to lunch at the Cod and Lobster after crossing over the Roxby Beck bridge to the harbour. 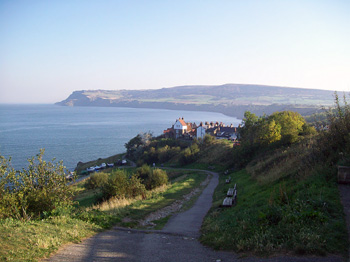 Instead, I walked back to Whitby, completing another section of the Cleveland Way. Staithes is ten miles above the town famous for Dracula’s fictional landing in England, while Robin Hood’s Bay is five miles below. As with my walk from Scarborough, I took too many photos and made slower progress than planned. Thankfully, I reached Whitby fifteen minutes before the last bus back to Leeds.

That was the last hiking I did, but watching Downhill has made me want to complete both The Cleveland Way and Coast to Coast walks. Hopefully I will one day hike both, finding more short uphill peaks on my long winding downhill descent into old age. 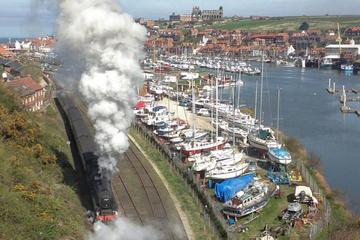