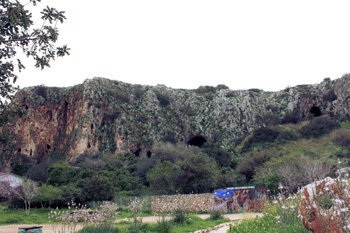 Using your car as a time machine, travel 200,000 years into the past when you drive along the Mediterranean Coast of Israel between Haifa and Tel Aviv. The sun is shining, the birds are singing and the religious and political tensions in the Middle East seem so far away as you pass through some of the most rugged and photogenic scenery in the country. There is history to be discovered but not all of it is connected to religion. In fact some of it even conflicts with our religious texts.

Your first stop is Nahal Me’arot and the year is 200,000 BCE. Here you meet three different hominid species and discover five different hunter-gatherer cultures, each distinguished by technological advances in the tools they used.

Nahal Me’arot was not at the center of any creation story. This was no Garden of Eden and it had no connection with the Book of Genesis. Furthermore Adam and Eve appear to have been vegans (Genesis 2:15, 3:17-19, 23) and not the hunter-gatherers that you will find here. Cain tilled the soil and Abel tended the flocks (Genesis 4:4) but none of the past residents of Nahal Me’arot were farmers.

We entered the spacious but gloomy-looking Nahal Cave, one of three caves open to the public (the other two were named Tanur and Garmal). Our journey into the remote past began with a 20 minute video outlining how the local caves were formed by ground water seeping through limestone and the early hominids that called these caves home over the millennia. None of them appeared to be the modern stone-age family known as the Flintstones.

The Tanur Cave had the longest continuous sequence of occupation of the three caves. Two hominid species called this cave home. Homo erectus, which comprised the Acheulean culture, was the oldest hominid species. Their remains were buried within the lowest levels of the 20 meter thick soil deposits forming the floor of this cave. This layer was composed of quartz sand from the Mediterranean Sea. At the time of the Homo erectus occupation, this cave was beach-front property. Sea levels were much higher back then because there was no ice age at that time. The present Mediterranean shoreline is over three kilometers away because the arctic ice pack has still not completely melted from the most recent glacial period that ended 12,000 years ago but mankind is actively working on accelerating this process through global warming.

Homo erectus had mastered the use of fire and utilized a hand-held stone for all of his basic needs including skinning, deboning and digging. Eventually, for reasons unknown, he disappeared from this area after having lived on site from about 200,000 to 150,000 BCE.

The second inhabitants of the Tanur Cave comprised the Muarian culture that arose about 150,000 years ago and lasted for about 50,000 years. It is not known if the Muarian culture was Homo erectus or the newer hominid model known as Homo neanderthalensis (Neanderthal man) but they utilized a greater variety of stone tools than the preceding culture including scrapers and hand axes. 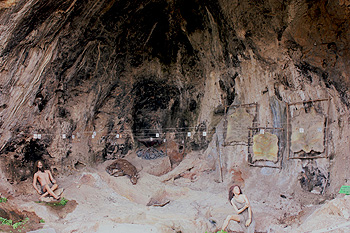 The third owners of this piece of the Tanur Cave were Neanderthals. They comprised the Mousterian culture and they immigrated here 100,000 years ago and called Nahal Me’arot home for about 60,000 years. You can see a Neanderthal exhibit in the Garmal Cave where you find male and female figures dressed in animal skins. The stocky, muscular Neanderthals stretched animal hides out on frames and produced stone spear heads. There were also a number of dug out areas in the ground but it is not clear what these were used for. Contrary to popular opinion the males did not carry clubs over their shoulder.

The Neanderthals possibly thought “there goes the neighborhood” with the arrival of the new residents in the nearby Hagedi Cave. The Hagedi Cave, not open to the public, is remarkable in that it was occupied by our ancestors, the Homo sapiens, about 60,000 years ago. Therefore the Homo sapiens and the Neanderthals appeared to have at least lived side-by-side at Nahal Ne’arot for about 20,000 years.

Remarkably these two species may have done more than just live side-by-side. Perhaps they even shacked up (caved up?) for a time inside the Nahal cave. In 2013 evolutionary geneticists discovered that select modern human populations in Europe and the Middle East carried Neanderthal genes suggesting that at some point interbreeding between the two species had occurred. No evidence of interbreeding has been found at Nahal Me’arot but it certainly appears that they had the opportunity. The Neanderthals eventually became extinct about 30,000 years ago for reasons unknown but you occasionally find one driving on one of our busy roadways or drinking in a bar.

Where did mankind evolved from here? For that answer you may wish to visit ancient Jericho which has its own history going back about 10,000 years but that is a different story. Our destination was south to Caesarea Maritima and a jump forward in time to that of Herod the Great in 9 BCE. 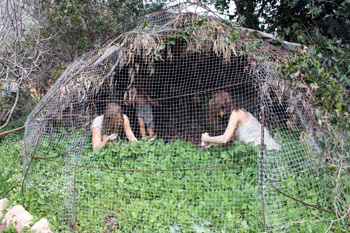 Herod the Great is most infamous for trying to eliminate the infant Jesus in the Bible (Matthew 2:16-18). At the same time he was also renowned as a prolific builder. All of his projects were built to impress but a number of them were designed with a unique purpose in mind. Masada was constructed as a fortress retreat in case the population revolted. The fortified palace at Herodium contains his tomb and of course there is the second Jewish temple in Jerusalem. The city of Caesarea by the sea (maritima), built between 22 and 9 BCE, was a man-made seaport named in honor of Caesar Augustus.

The smell of fish lingered in our nostrils as we walked towards the shore for a view of this ancient harbour. The breakwater, with occasional waves crashing over top of it, was constructed using special hydraulic cement poured into large empty wooden crates that had been sunken off-shore. The end result was the largest harbour in the ancient eastern Mediterranean, capable of accommodating as many as 300 ships. St. Paul departed from this harbour on two occasions (Acts 9:30 and Acts 27:2). After reviewing the breakwater we started our tour of the ancient city at the Roman temple.

History records that only one of Herod’s parents, his mother, was Jewish. Since he had already constructed the Temple in Jerusalem to satisfy his Jewish roots, he took the opportunity to satisfy his pagan roots by constructing a temple dedicated to Rome and Caesar Augustus at Caesarea Maritima.

The vaulted temple platform and foundations are still visible today but the columned temple was torn down around 400 CE and eventually replaced with an octagonal Byzantine church a century later. You can still see the remains of some of the columns of this structure which also served as a mosque after the Arab conquest in the 8th century CE. Crusaders used this structure as a church in the 13th century CE.

Walking to the far corner of the ancient city you find a Roman theater that is still used today for concerts and shows. Built between 22 and 10 BCE, this theatre seated about 4000 people in 26 rows of seats. The acoustics are so good that I could stand at the top row and hear Diane speak in a normal tone from the stage. The Byzantines closed the theatre in the 5th century CE because of the licentious entertainment being held there. There was no licentious entertainment being performed at the time of our visit however.

Displayed inside the theatre is a stone tablet inscribed with the name Pontius Pilate, Prefect of Judaea. This is the only evidence of the presence of Pontius Pilate in Judaea outside of the Gospels (Matthew 27:11, Mark 15:1, Luke 23:1, John 18:29). The original tablet, found near the theatre, is housed at the Israel Museum in Jerusalem. 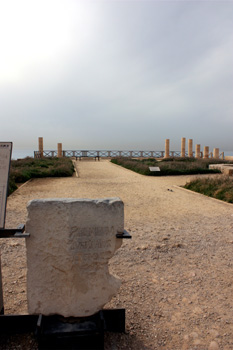 According the Roman Historian Flavius Josephus, this theatre was the site where Herod Agrippa died as recorded in the Book of Acts (Acts 12:19-24). Herod Agrippa, grandson of Herod the Great, was the king of Judaea at the time.

A short walk from the theatre, south of the harbor area, you find a promontory jutting out into the sea. Flavius Josephus recorded that a “most magnificent palace” was constructed here by Herod the Great. Now you only find the weathered grayish brown remains of a facility that once had two wings. The upper wing was used for political and administrative functions and the lower one was used for day-to-day family life. The partial remains of a number of upright columns stand guard over a less-than-Olympic-sized swimming pool.

Steps from the palace, the local Roman population enjoyed Ben Hur-style chariot races and gladiatorial combats on the sandy track at Herod’s Hippodrome. The stadium surrounding the U-shaped track (an oval track at one time) could accommodate over 10,000 people. You may wish to take a few minutes to review the horse racing scenes depicted in frescos and the life-sized metal sculpture featuring two horses and a chariot.

After wandering around the ancient city, exit and check out at the high level aqueduct that runs along the beach from the north. Built by Herod the Great, this weathered yellow-beige limestone structure carried water from the slopes of Mount Carmel approximately 10 kilometers away as Caesarea had no natural source of water in the vicinity. I can almost guarantee that a photograph of this aqueduct, with the backdrop of the sea peaking through the arches, will be one of your most memorable souvenirs of your visit before you travel on to your next destination, whatever that may be. Ours was a drive further south and on to present day Tel Aviv but again that is a different story. 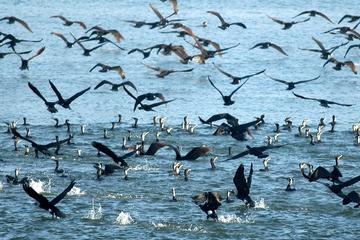 Admission to the Nahal Me’arot Nature Preserve is 22 Shekels. If you are traveling to Nahal Me’arot by rental car, you can use the following directions. Access the site from Road #4 (old Haifa-Tel Aviv road) east at the Faradis-Bet Oren Junction between km. 186 and 187. You can also take Egged bus #921 that travels between Tel Aviv and Haifa.

Caesarea is about 40 km north of Tel Aviv. Admission to Caesarea Harbour National Park was 40 Shekels.

All photos are by Diane Gagnon, a freelance photographer. She has traveled extensively in North America, the Caribbean, Europe and parts of South America. Her photographs have accompanied Troy Herrick’s articles in Live Life Travel, Offbeat Travel and Travel Thru History magazines.