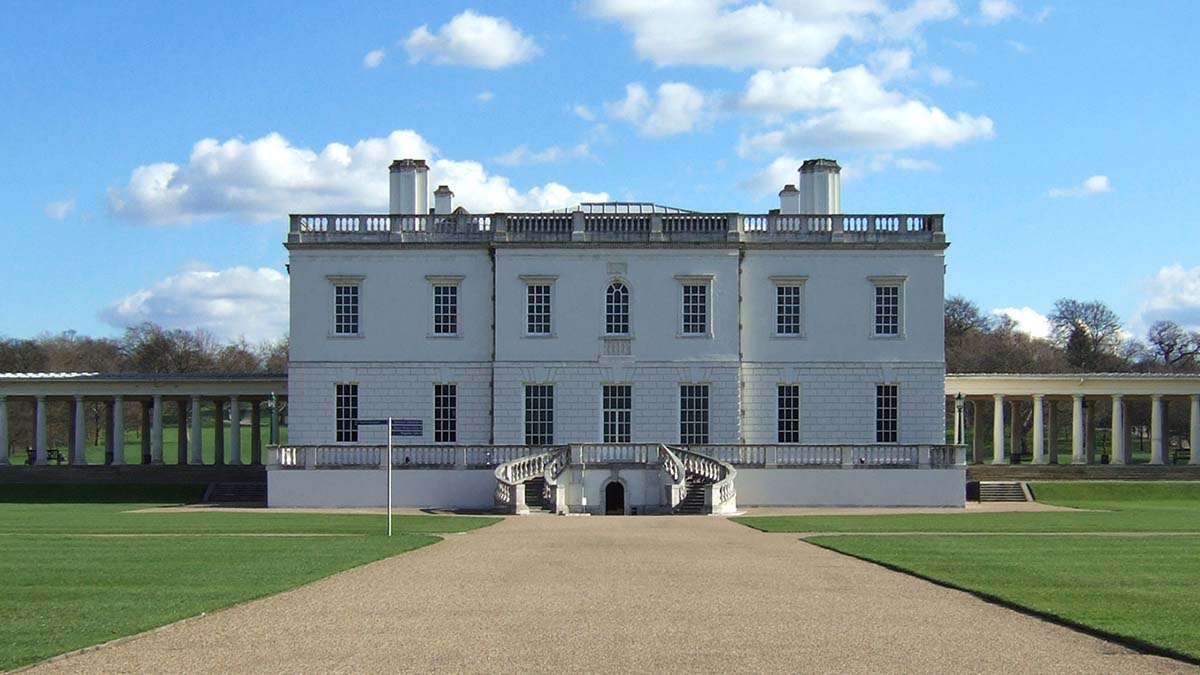 Regal. That is the only word to describe the feeling I had when visiting Royal Borough of Greenwich. The neighborhood was only a ten-minute walk from my Greenwich hotel, and since it was an overcast and slightly chilly but otherwise mild November weather day, I explored this borough of southeast London by foot. It is an extraordinary place to spend a day walking around and observing history and taking it easy for a few hours. 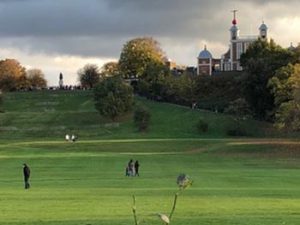 You can stroll around Greenwich Park and take in views of the city of London, the Royal Observatory, Isle of Dogs and the River Thames. This 180-acre park is part of the Greenwich World Heritage Site and is open year-round. This area of land was originally used for falconry in the 15th century. The next century, King Henry the VIII brought deer unto the land for hunting, and to present day a small herd is maintained in a southeast section. Walking the numerous pathways in the park you will see beautiful 17th century chestnut trees including the famous Queen’s Oak named after Queen Elizabeth I, many flower gardens, a duck pond and a cricket patch, plus many more amenities for visitors to enjoy.

[TOP PHOTO] This house was commissioned by King James I for his wife Anne Of Denmark. It was built from 1616 to 1635 by architect Inigo Jones. It has become one of the most important homes in British history, due to the fact that it is the first classical structure built in England. You can walk into the Great Hall and look up at the ceiling and marvel at the Tulip Stairs, first of their kind.

In this house, I found the Portrait of Queen Elizabeth I in the Queen’s Presence Chamber. This Tudor Portrait was ahead of its time, as it was an early symbol of modern feminism, showing her power as a monarch with her hand on a globe, embroidered suns in gold on her clothing and her upright posture and clear gaze.

As you walk throughout the Queen’s House, you cannot help but get absorbed in the over 450 works of art on the walls. 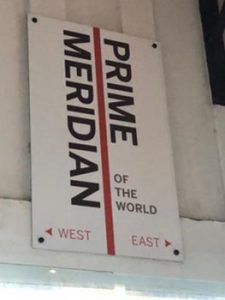 The Prime Meridian is located at this site and that is how the term Greenwich Mean Time came about. The Royal Observatory was commissioned on August 10th, 1675 by King Charles II with the foundation stone laid on that day. Architect Sir Christopher Wren chose the site. The International Date Line divides the Eastern and Western Hemispheres. The Prime Meridian is marked in several ways at the observatory, including a brass then stainless-steel strip in the courtyard, a sign inside the observatory, and since December 1999 this basis of longitude has been marked by a laser pointing North into the London sky. 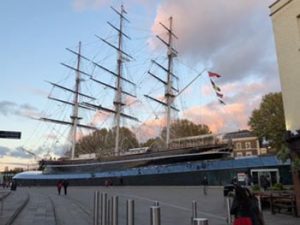 It really is something to be in the presence of the famous Cutty Sark. Located on the Thames River at Greenwich Pier, this British Clipper Ship was built in 1869. She was one of the last tea clipper ships and one of the fastest. The Cutty Sark has an amazing history as it was used as primarily a tea transport ship for its first eight years in service, a various cargo ship from 1878 to 1873, an Australian wool cargo ship and was finally sold to Portuguese cargo company J. Ferreira & Co. ship in 1895, and served on this fleet renamed Ferreira until 1922 when she was renamed Cutty Sark and returned to her present home of Greenwich in London. Many events are planned year-round in and around this historical clipper ship and it is definitely worth a visit when in London.

The streets of Greenwich still have the feeling of another time, in spite of the fact that a few modern chain restaurants are located throughout the borough. From the quaint Tudor taverns to the Greenwich Market, you really feel like you are stepping in the past. Here you can get some traditional British fish and chips, or Pie and Mash with eels. Here there are many unique shops and food vendors to serve every budget and taste. 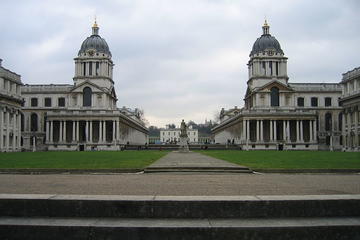 The borough of Greenwich is located in a section of London that is convenient to many other attractions in the city. This area of the city is accessible from the London Underground Station North Greenwich, or you can take the Docklands Light Railway to the Cutty Sark Station. From the riverbank, you can catch numerous ferries across the Thames. You can take the Emirates Air Line cable car from the Greenwich Peninsula near the O2 Arena over the Thames to the very popular Excel Center at the Royal Docks.

You can also get a ‘Cutty Sark’ Entrance Ticket online.

Daily guided tours of Royal Greenwich are offered several times a day from the visitor center. These tours take you around the borough and give you a good orientation of the area.

About the author:
Nicole Bergstrom is a journalist and seasoned traveler. She studied Journalism/Communications at Pace University, where she focused her course of study on magazine feature writing. She worked for nine years in magazine advertising before returning to her passions: writing and traveling. In May 2017, she started her travel blog, Nicole the Travel Scribe, where she documents her journeys.

Photo Credits:
Queen’s House by Bill Bertram / CC BY-SA
All other photos are by Nicole Bergstrom