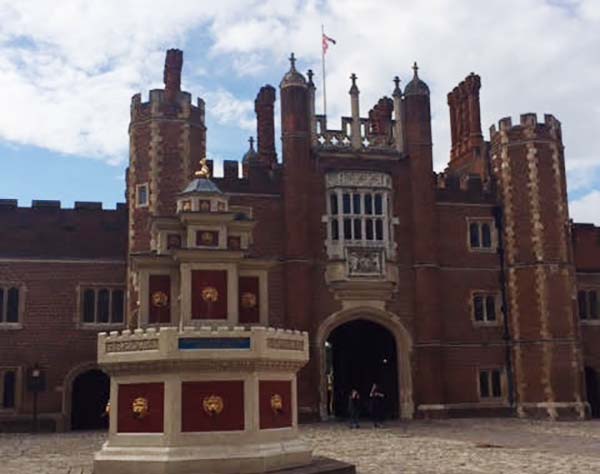 A Royal Residence Through The Ages

Henry the VIII, who has not heard of him? The English monarch who ruled England from 1509 – 1547, is famously known to everyone as the king who had six wives, and forged the path for English Reformation in his quest for marriage to Anne Boleyn. Also known as Henry Tudor, he was born to Henry VII and Elizabeth York, at Greenwich Palace, in Greenwich, London in 1491.

Hampton Court Palace, located in East Molesey, Surrey, is one of the many palaces of King Henry the VIII but only one of the surviving few. This is the place from where the King and his advisers first sent out letters to Rome threatening to break up with the Catholic Church. This is where he married Kateryn Parr, the final Queen Consort. Henry’s son Edward VI was also born here.

But first here are some details about King Henry the VIII and his political and matrimonial saga. After the death of his brother Arthur, at age ten he became Henry VIII, king of England. At the age of seventeen, he married his brother’s widow, Katherine of Aragon, in the year 1509. Katherine and Henry had one surviving child, Mary but Katherine was unable to provide him with a male successor. Henry’s eyes were now on Anne Boleyn, his queen’s lady-in-waiting. In order to marry Anne, Henry in 1527 began seeking annulment of his marriage to Katherine. It was a long struggle as is well documented in history which culminated in Henry marrying Anne in 1533. For this marriage, Henry broke away with the Catholic Church and the Church of England was formed with the king as its head.

Anne became the mother of Elizabeth I who would go on to become one of the greatest monarchs of English history. In 1536, Anne was executed on charges of adultery and conspiracy against the king. Henry then married Jane Seymour who provided the longed for male heir. Edward VI ascended the throne at barely ten years of age and ruled for about six years before he died of illness. Jane Seymour, Edward’s mother died within two weeks of childbirth and Henry after two years, in 1540, married Anne of Cleves. The marriage, a diplomatic effort, did not work out and it was dissolved within six months. She was awarded the title of “The king’s sister”. Henry’s next wife was Catherine Howard, first cousin to Anne Boleyn and lady-in-waiting to Anne of Cleves. This was once again a love match and Henry and Catherine were married that same year soon after the annulment with Anne of Cleves. The King at forty nine was in love with the teenaged Catherine and lavished gifts of jewels and land to her. Catherine Howard suffered the same fate as her cousin Anne Boleyn as she too was executed in 1542 on charges of adultery. The sixth and last wife of Henry VIII, Kateryn Parr, married him in 1543 and outlived the King who died in 1547. Kateryn Parr passed away in 1548.

On a sunny September morning, my family and I boarded a train from London’s Waterloo station to Hampton Court Palace. By the time we reached Hampton Court, the train had emptied out, thereby showing me that not too many tourists traveled to see this palace. It was a short walk from the station to the large, gilded gates of the palace and we arrived at a virtually empty ticket entrance. This was certainly in stark contrast to the crowds at Tower of London and we were happy to be away from the pressure of the heavy tourist areas of the city. 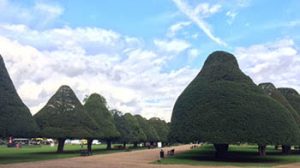 We started our visit at the rose garden, also next to which is the kitchen garden. These are but two of the various gardens that cover about sixty acres of landscaped gardens along with about 750 acres of royal parkland. One would need an inordinate amount of time or multiple visits to see all the different garden areas such as The Maze, the Great Vine, the Orangery, the Fountain court gardens to name just a few, all of which would make for a delightful outing for garden enthusiasts. But we were pressed for time and so we decided to focus on the palace instead. 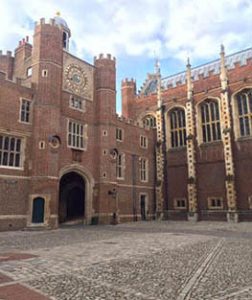 The Hampton Court Palace which started out as a manor in 1494 was rebuilt in a grand manner by Cardinal Thomas Wolsey, the Lord Chancellor for Henry VIII. The king took over the palace in 1528 after Wolsey fell out of favor with him because of his failure in procuring an annulment of his marriage to Katherine of Aragon. The palace would now become a Tudor royal residence, an impressive edifice with all the hallmarks of Tudor architecture.

There was the fabulous gatehouse with the still functioning astronomical clock with its Renaissance bas reliefs. I realized that the palace is clearly divided into parts, each highlighting the eras of the different monarchs who occupied it. Therefore, the palace also has a distinct Baroque side as it functioned as home for later Stuart and Georgian rulers. 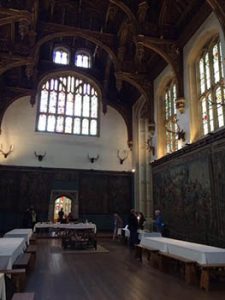 We made our way through the Tudor side, stopping to admire the grandeur of Great Hall, impressive with its ornately carved hammer beam roof and walls covered in elaborate, medieval tapestries, a hallmark of English Gothic architecture. This was followed by the Chapel Royal, a truly, magnificent prayer room with its sumptuously gilded blue pendant vaulted ceiling. The chapel, a splendid specimen of the Tudor style also had renovations done 150 years later in the Baroque form by the famed architect Sir Christopher Wren, builder of the magnificent St. Paul’s Cathedral in London. While reading the leaflet about the chapel, I discovered that the altar cross that we were seeing was made by Sir Edwin Lutyens, the architect famous for planning the city of New Delhi in India and also a lot of its buildings.

The kitchens of Henry VIII are the largest such from Tudor England, built by the king to feed his six hundred or so courtiers. There were various rooms filled with mock meat, fish, pies, various kitchen implements and pottery giving us a true picture of the hustle and bustle of everyday kitchen life in medieval England. We finished our tour of the Tudor kitchens after visiting the wine cellar; now better understanding the voracious food habits of Henry VIII and his companions that most of us are familiar with through movies and television shows. 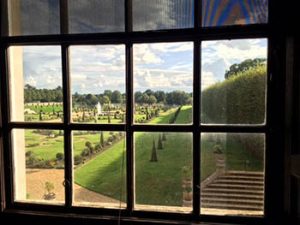 After a bit of a rest, we decided to tackle the Stuart and Georgian portions of the palace. The Stuart sections are associated with the rulers James I (1566 – 1625), Charles I (1600 – 1649) and William III (1650 – 1702) and Mary II (1662 – 1694) the joint monarchs. These are the Baroque sides and the stark difference in the interiors and architecture from the Tudor Perpendicular Gothic style is immediately apparent. I was intrigued to see the difference in the scale between the State Apartments and the Private Apartments of William III. What caught my eye was the spectacularly eye catching display of arms and armors on the walls of the Guard Room. We saw the stunning Privy Gardens from the windows of the Privy Chamber of William III’s State apartments. The Privy Garden is the most accurate restoration of a Baroque garden with its raised terraces, pyramidal topiaries and intricately carved grass turf where the cut out spaces are filled with gravel.

The highlight in the Georgian apartments is the dining room of George I (1660 – 1727) where I first encountered the art of starched linen napkin folding. Folded cloth was turned into folded art depicting animals, trees, architectural shapes and such displayed on dining tables in European courts. Thus this predominantly German art followed the Hanoverian George to England.

Hampton Court Palace turned out to be quite a serene, wonderful trip to discover the lifestyle of Tudor and later England if one wants to spend a few hours away from busy London. 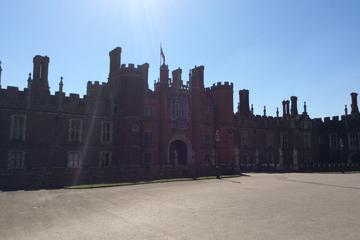 Hampton Court Palace is 35 minutes by train from London’s Waterloo station. The palace gates are a short walk away from the station.

Lots more information is available on the palace’s website.

A new addition is the Magic Garden for families which opened in May 2016.

All photos are by Susmita Sengupta:
Cobblestoned palace exterior courtyard
A view of the garden with its beautifully manicured yew trees
The Anne Boleyn Gate with its pre-Copernicus astronomical clock
The Great Hall of Henry VIII
The magnificent Privy Gardens