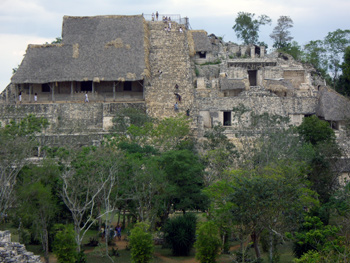 As I was standing on top of the Acropolis, the tallest building in Ek Balam, my first thought was “I stood on top of this when it was just a pile of rocks, covered with vegetation”. I didn’t realize that I said it out loud, and a few of my fellow visitors stopped to ask me about it. I normally don’t like to be the center of attention, but I really enjoyed talking about my older adventures at the same site, when it was just rubble. 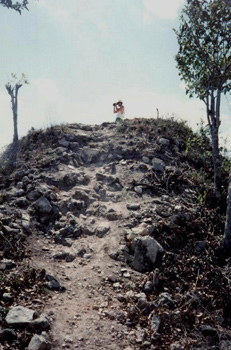 I had visited Ek Balam for the first time in 1995. I was on the way to Chichen Itza from Coba, on the old road. After passing the town of Valladolid, a dirt road led to this small site. It was called Ek Balam, Night Jaguar. I ended up there about midday when it was hot and humid, with no breeze at all. However, after driving all morning on a dirt road that seemed to be in the middle of nowhere and leading to nowhere, I spotted a small palapa hut. It was the ticket booth, and it looked deserted, just like everything else around us. When I stopped, an old Mayan man came out to the front of the hut. He was the caretaker of the site, or the ticket agent. I wished that I could speak Mayan, and his Spanish wasn’t much better than mine, so I felt like it was a missed opportunity to get to know someone interesting and to learn more about the place I was visiting from a local. I purchased my ticket from him and he pointed me in the right direction and I set off to see this little-known site.

The site was barely excavated, and totally deserted. Alone with the ancient ruins, I felt like a true explorer. Fortunately there were quite a few trees, so most of the walk was shaded, but the heat and humidity was making me feel very sluggish, even with the excitement of being in a deserted ancient city.

As I got used to walking in clothes dripping with sweat, I started feeling better, especially when I spotted the few structures that were standing. Most of the buildings were overgrown with vegetation, and some were just piles of rubble. I climbed on every mound and knew that I was walking or standing on a pyramid, or another ancient building. 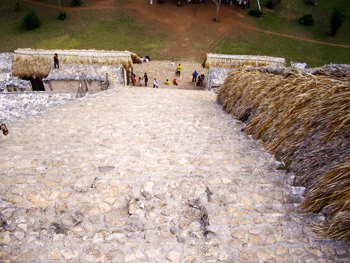 I realized that the tallest pile of rubble, overgrown with trees, was a good sized pyramid. Although steep, with a barely visible trail on it, I climbed to its top. It was a real challenge for me since there were not even tall enough trees growing on it to shade me from the scorching sun. In spite of it, I still made it to the top and was rewarded with a great view. I could only guess how important this site would have been with a structure this big. I fantasized on seeing the pyramid and its features, wondering what they were like. I noticed big pieces of cut stones, that I recognized as part of a building. As I learned in later years, I had been standing on top of the Acropolis, indeed the biggest structure at the site.

After getting off that mound, I kept walking through the small site. I noticed a pile of rectangular stones, cleaned and gleaming in the bright sun. Most of the stones were numbered, like pieces of a puzzle. It was such an exciting discovery for me, a sign of the work of archeologists. I knew now that they were in the process of reconstructing the site, or at least some of the buildings. I also knew that I would return to see it excavated and rebuilt. 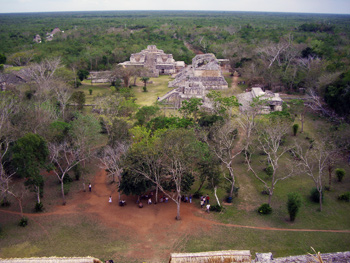 Years later, there I was standing on top of the same tall mound, but this time I had climbed it on a stairway, stopping along the way to marvel at the statues on its sides. The view from the top was pretty much the same though there were a lot more structures standing.

I was definitely not alone at the site this time, and it had a different feel with all the buildings standing and a multitude of people around me. I enjoyed seeing the buildings in their entirety. The fact that I had seen them overgrown and deserted before made it so much more magical for me. 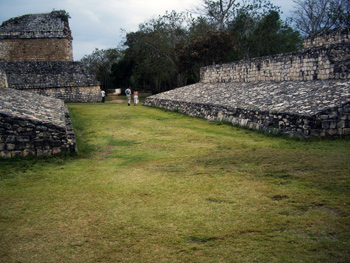 Ek Balam is a very compact site. Although it was a larger city, only the center of it, the main plaza has been excavated, which covers about one square mile. This makes it very easy to walk, though. A large arch stands at the entrance of the city, with the remains of a sac-be going through it. The sac-be, or ancient Mayan road (translated as “white road”, due to the color of the limestone that it had been constructed from), connected Ek Balam to other sites, like Coba and Chichen Itza. When I passed through the arch, I felt like I had entered the ancient city.

On the way to the main pyramid, I walked through the Ball Court, similar in size to the ones in Coba. I tried to imagine the ancient ones playing the ball game and how high they had to get the ball to make it through the hoops. 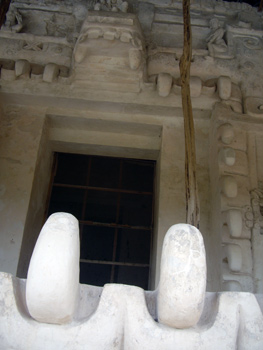 The Acropolis is definitely one of the most impressive structure in all of the Yucatan, a palace and pyramid in one. Though not as tall as Nohuch Mul in Coba, it is much larger overall, measuring 480 ft in length, 180 ft in width and 96 ft in height. Since it has been excavated, it is definitely the most spectacular, with all of the intricately carved figures, unlike any other we’ve seen in all of Yucatan, standing on its walls. The palace has six levels, and at the entrance a monster-like figure, possibly a jaguar, with huge carved teeth is guarding the entrance to the Underworld, the place the Ancient Maya went after death.

Inside the pyramid is the tomb of a great ruler, Ukit Kan Le’k Tok’. Other than the jaguar, many other carved figures, some of the warriors, decorate the walls.

After finally leaving this amazing structure I went to the other set of buildings walked around then climbed all three palaces, overlooking an impressive courtyard. While exploring all of these structures, I came across many round holes in the ground, or on the structures, the inside of which were all carefully paved with rocks. These are Mayan chultuns, used to collect rainwater. 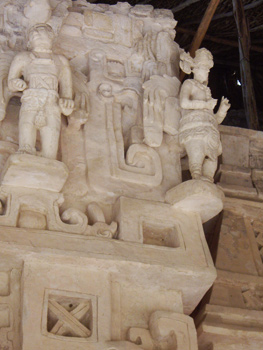 There is no Mayan site without at least one stelae, a large standing stone, filled with drawing and writing, and Ek Balam is no exception. The one here depicts a ruler, with the hieroglyphic writing around his figure, erected in honor of Ukit Kan Le’k Tok’. Writing in stone was very important to the Maya. They have erected stelae in every known site. It was a way for them to record history and preserve their past. They have also written codices or books, however, most of those didn’t survive, burned by the Spaniards or just disappeared in the jungle, so stelae are very important for the study the Mayan writing and history. They were usually erected to commemorate a moment in history, a moment important to someone, mostly to the rulers of the cities. Because of this, stelae have a figure of the ruler they are talking about, with the important dates in his life. They have the date of his birth, of his accession as a ruler, some important dates of his rule, and finally the date of his death or descend into the Underworld.

Before leaving, I took a last look at the Acropolis and thought back to the day when I had first seen it, and how I had imagined what a great pyramid lay under all that rubble. Now it is visible to the public, and it is spectacular.

Ek Balam [TOP PHOTO], a Mayan site meaning “Black Jaguar”, is situated between two major sites, Coba and Chichen Itza. It is easy to get to at this time since it is part of the Mayan Riviera. The road is paved, and wide, with lights on it as well. It is a side road off the main one between Cancun and Valladolid, with signs for Ek Balam. The site is about 20 miles from the colonial town of Valladolid. There is a small town by the ruins, with a restaurant and hotel. Another attraction at the ruins is a cenote, Xcan-Che, open to the public, and worth the stop.

The ancient city was occupied for about one thousand years, from the Late Pre-Classic (100 B.C. – 300 A.D.) to the Late Classic (700 – 900 A.D.) period of the Mayan civilization. There is evidence that the site was founded by its first ruler, Coch Cal Balam, around 100 B.C. It was at its strongest and most populated around the Late Classic period, between 700 – 1000 A.D., when most of its structured have been built. At its peak, around 800 A.D, its ruler was Ukit Kan Le’k Tok’, whose tomb had been found inside the Acropolis. As excavations are still ongoing, there is not much more known about this site, except that the architecture is different from the nearby sites though they have been occupied around the same time. 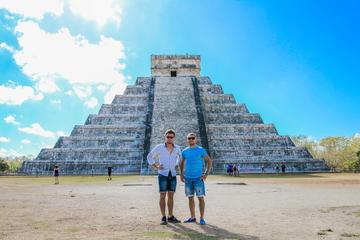 About the author:
Emese Fromm is a writer and translator, fascinated by Ancient Mayan Ruins. She has been visiting them with her husband for over 20 years while also learning about the people who built them. They have taken their children on these visits since they believe that traveling is the best education for them.