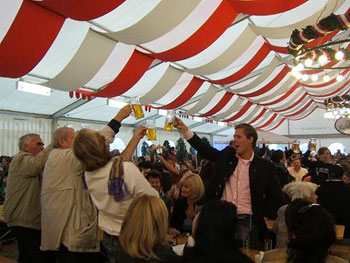 My congested breath puffs out in visible clouds as I lumber down the trail from my hostel. In my hazy, fever-induced state, it takes me a while to clue in that large groups of people are headed in the same direction, toward Salzburg’s Altstadt (Old Town). I write them off as other tourists braving the cold to see the heart of the city. My first glimpse of the village through the trees tells me otherwise, and it isn’t just my fever. Underneath the looming hilltop fortress, the town is quaint, baroque, and lit up like Vegas. 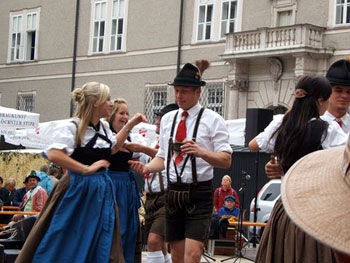 Spinning rides and vendor booths pack the central square. They are selling wooden toys and traditional crafts and that curious gingerbread that seems to be a fixture of the German-speaking festival: heart-shaped with endearments printed in icing, meant to be worn around the neck. There’s music in the streets, and a group has gathered around to watch an old couple who is dancing a slow waltz. I’m surprised to see how many people have arrived wearing the traditional lederhosen and dirndls. As I squeeze my way between hordes of carousing Austrians, I feel as if I have arrived in the wrong city. I hadn’t pictured the town of Mozart’s birth to have such activity.

But then the smells reach my nostrils and it doesn’t matter. There’s the salty warmth of pretzels, the tang of sauerkraut, and a deeper scent that just says food. I dig into a giant cheesy pretzel as an appetizer, and then find the cluster of food booths. Sausages and schnitzel seem to be the main order of the day. I make my way to a schnitzel booth and dig right in, rubbing my hands together to keep warm between scooping massive forkfuls of the tender breaded veal.

Though it’s only late September, I’m shaking with the chill by the time I’m finished. I use my own cold as an excuse, and try to make a guilty return back to the hostel. But then I hear music that to my ears could only be described as oom-pah-pah coming from the large red-and-white-striped tent I had somehow missed on my walk in. Inside, a folk band in lederhosen plays to hundreds of spectators singing, eating, dancing on benches, and clanking giant steins of beer. There’s also the element I was most desperately missing: warmth! I feel like I’m the only non-Austrian in the 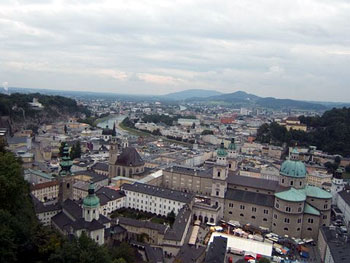 The older gentleman sitting across from me tries to engage me in conversation, so I bust out my best German – in my poor imitation of the Northern German accent I had learned in school. I might as well have been speaking gibberish to the Austrian, so we settle on my native tongue. A pair of women join the stilted English conversation, and I finally learn that September 24th is the Feast of St. Rupert, the patron saint of Salzburg. The festival in town occurs on the weekend each year closest to that date. 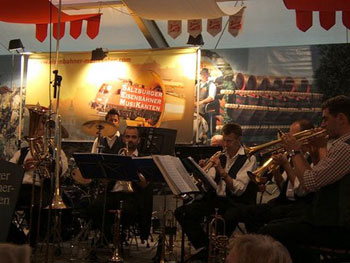 But then the three Austrians start a new game that I can only describe as ‘inebriate the foreigner’. A second beer from my new friends is in order, but that isn’t all. I’m obliged to accept a glass of Sturm, a young red wine that tastes amazingly like grape juice. Dangerous for a heavy drinker, but very tasty. A wink from the man and scrunched noses from the women tell me I’m in trouble at their next plot. A girl wearing both a long dirndl dress and a barrel comes by our table. The Austrians hand the girl money, and a single shotglass of clear liquid is placed in front of me. All eyes turn my way and I feel a twinge of foreboding.

“Schnapps,” the man says ominously, with delight twinkling in his eyes.

It burns all the way down, but clears my sinuses on the way. The women howl with laughter at the faces I make and I have to turn down the offer of a second shot. Just one was enough to warm me all the way back to the hostel after eventually saying ‘Auf Wiedersehn’ to my Austrian friends. 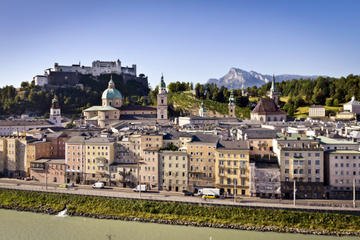 About the author:
Jessica Peter has deep-seated obsessions with writing, crafting, and travel. Some of her favourite travel experiences include watching busking bands, searching out street art, and sampling local food. On her “Bucket List” is travel, pretty much everywhere. Find her at her creativity blog, jessdoesstuff.blogspot.com or on Twitter twitter.com/jessicapeter1

All photos are by Jessica Peter.