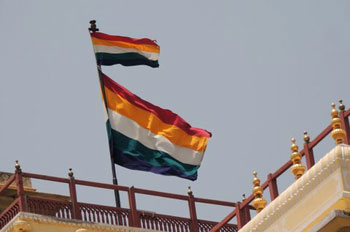 Flying high over the Jaigarh Fort, the colourful flag provides a welcome contrast to the brown, which dominates the landscape.

This is the flag of the erstwhile royal family of Jaipur, and flying atop the fort named after one of its greatest ancestors, it signifies the importance of the royal family, which lingers on in spite of the fact that they no longer rule the city. 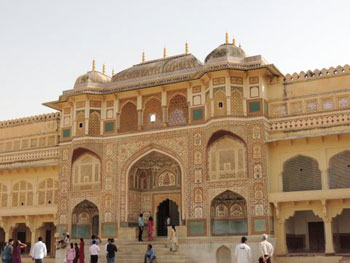 While the flag drew attention thanks to its colourful nature, it was something else, which intrigued me – the presence of a smaller flag bearing the same colours above it.

Flags are always interesting, for they always say something about the country or group they represent. And so does this one. There isn’t just one, but two stories, which tell us more about not just the flag, but the people whom it represented.

The Kachwahas were a Rajput clan who ruled over a number of princely states in western India, especially present day Rajasthan. The largest and oldest among these kingdoms was the state of Amber (pronounced Aamer), which later came to be known as Jaipur. The original flag of the Kachwahas was the ‘Jhadshahi’, or tree marked flag, which bore the figure of a Kachnar tree (Bauhinia Variegata) on a white background.

As the Kachwaha clan grew bolder and greater, they annexed neighbouring kingdoms and came to be known as a force to be reckoned with. When Raja Man Singh, in 1585, defeated five major Afghan tribes, the flag of Amber was changed to include the five colours of the five tribes. The simple green creeper on a white background gave way to five bands of colours – Red, Yellow, White, Green and Blue. The new flag was called the ‘Pachranga’ – the flag with five colours. 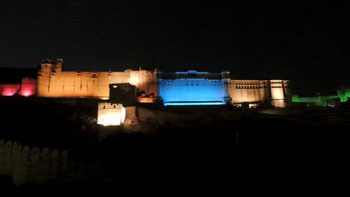 And so it remained for the next century and a half. In 1699, Raja Jai Singh II came to power at the death of his father. He was then just a 11 year old boy, but he came to be known as one of the most enlightened rulers of 18th century India. In addition to performing his duties as a warrior king, Raja Jai Singh also managed to find time to pursue his many interests, chief among which were mathematics and astronomy. He was regarded as a reputed astronomer, and he is most remembered for building the astronomical observatories known as ‘Jantar Mantars’. Above all, he was a farsighted ruler, who planned and built the beautiful city of Jaipur, which bears his name. 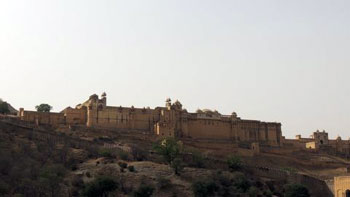 At the time Jai Singh came to power, the Mughal ruler at the helm of the Indian Empire was Aurangzeb. The young king so impressed the Emperor that he was awarded the title ‘Sawai’. The word literally means ‘one and a quarter’, and the title meant that the king was a quarter above everyone else. Raja Jai Singh was the first to be awarded this title, and his descendents were allowed to use the same. It was then that the flag of the Kachwahas gained the additional flag – a quarter the size of the original flag, showing the same pattern and colours, it flew above the flag, proclaiming that it was the flag of the Sawai Maharajas – a quarter greater!! 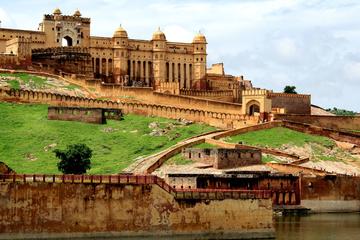 ♦ Jaipur, the capital of the state of Rajasthan in India, is known as the Pink City. The name comes from the rose coloured buildings of the old city, which was planned and built during the reign of Sawai Jai Singh II in the 18th century. Today, the city has grown well beyond the walls of the old city, but the city still thrives as the hub of the handicraft industry in India, ranging from gems and jewellery to textiles and carvings.
♦ Jaipur is well connected to all parts of India by road, rail and air. The nearest major city is New Delhi, which is just 225 km away.
♦ There is no dearth of accommodation in Jaipur. From Five Star hotels and resorts to budget hotels and lodges, the city has it all.
♦ The best way to explore the old city of Jaipur is on foot. However, if you feel tired, you can always be sure of finding an auto or cycle rickshaw to give your feet some rest. The Rajasthan
Tourism conducts daily tours around the city. There is a tourist bus available for whole day sightseeing, and cars for hire.
♦ The must see places in the old city are the Observatory, known as Jantar Mantar, the Hawa Mahal, and the city palace. A little away from the city is the Amber Fort, the original seat of the royal family, and the Jaigarh Fort, built at a later date to augment the protection to Amber.

About the author:
Anuradha is a home maker and budding travel writer, She lives in India and loves to travel with her family. Taking every opportunity to explore known and unknown destinations, she writes about her travels on her blog, A Wandering Mind. Her greatest desire is to visit every corner of her beautiful country.