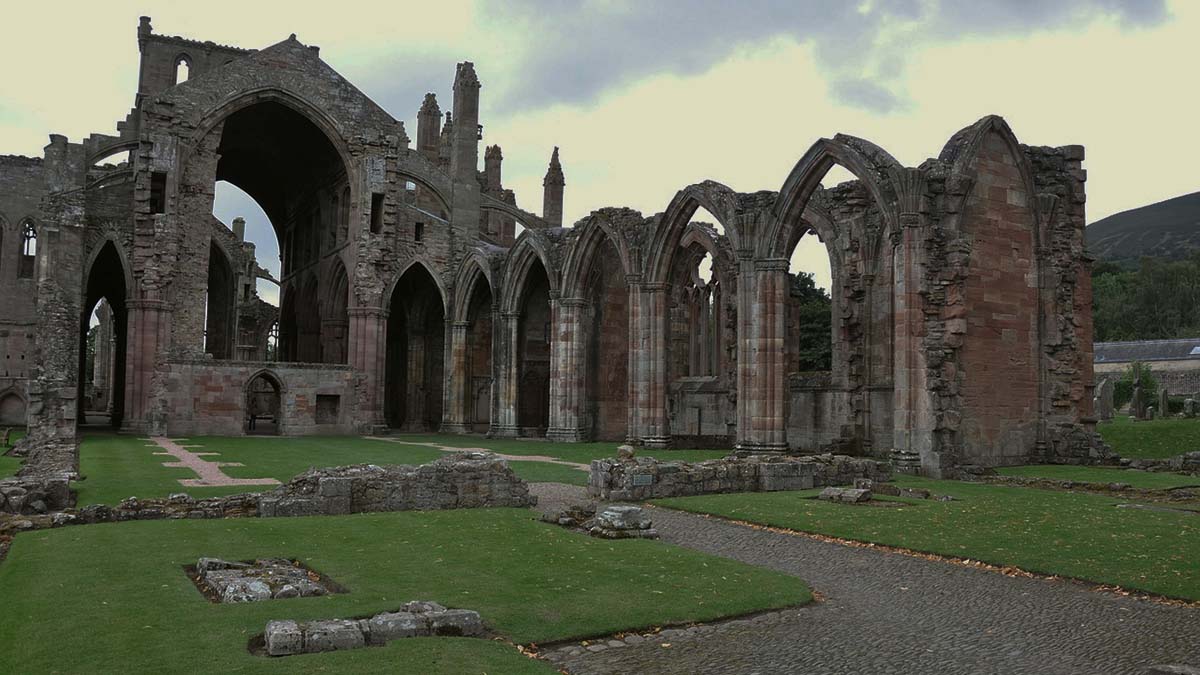 In the heart of the Scottish Borders, Melrose is the perfect holiday destination for, walking, cycling and rugby. Melrose also boasts some of the best salmon and trout fishing in Scotland. Visitors to Melrose are drawn by a range of attractions. Best known is the ruins of the Melrose Abbey, which lies on the north east side of the centre of the town and, off course the ‘Hunderprest’ vampire that roams the ruins at the dark of night. 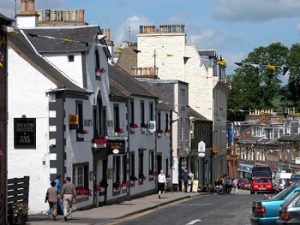 Melrose Abbey was founded by a colony of Cistercian monks in c.1136. Although this was one of Scotland’s wealthiest monasteries, it suffered badly in the wars that ravaged much of the Scottish Borders in the medieval period. The magnificent rebuilding of church in the late 14th and early 15th centuries was a result of damage caused by the English in 1385. The 16th century Commendator’s House is now a museum and the Chapter House contains the burial casket of a heart, thought to be that of King Robert I “The Bruce”. A considerable portion of the abbey is now in ruins. These lichen-covered ruins, among the most beautiful in Europe, are all that’s left of the ecclesiastical community.

There is an eerie story that tells how the monks of Melrose Abbey saved the town from dark specter that had been plaguing the inhabitants for some time. The Vampire of Melrose was, during his lifetime, a chaplain to a lady who lived nearby. The chaplain was fond of all manners of sin and vice. He was then nicknamed ‘Hundeprest’ meaning ‘Dog Priest’. This appellation was given to him because of his favorite sport of hunting on horseback followed by a small pack of howling hounds. In Stories of the Border Marches, John Lang says: “Other things he also loved that made not for sanctity, and when, at last, he died, his death was no more holy that his selfish, sensual life had been.”

When the chaplain died, he paid the price for his wrong doing as his soul could not find peace. His ghastly form stalked the streets at night in search of blood, terrifying the locals. The town’s people turned to the church for a solution to their plight and the monks sought to answer their pleas. They prayed, fasted and challenged the ghoul, eventually defeating it. The monster’s corpse was thrust into a fire, reducing it to ashes that were then carried by the wind over the Lammermuir Hills to the north along the Scottish borders. 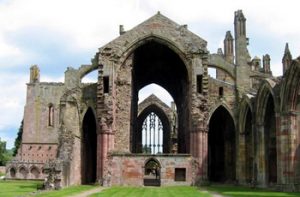 Sometime after his death, it was said that he tried to enter the Melrose Abbey at the dark of night in the form of a winged bat and turning into dark vampire creature. Through prayer and rituals against the devil the monks of the abbey were able to drive him away. After denied access to the abbey, he roamed through the grounds and cottage of a woman who in times past when he was among the living was in his employ. It was reported by the near neighbors that the vampire roamed about the dwelling where he moaned and screeched at her and causing much alarm; thus she had no choice to summon an elder monk from the Abbey to investigate this disturbance and perform the rites of exorcism.

The elder monk whom was summoned brought along a fellow monk and two other men, both novices and began the investigation. They decided to watch the former priest grave when, in rustic places, the last glimmer of daylight died away. During the monk’s watch, the priest arrived in the guise of a vampire and appeared to levitate out of the deep grave, pushing gravestone asunder. The frightening phantom began to approach the trembling monk at an alarming rate. The priest retreated, as he composed himself from the shock. He then lifted up staff and smote the figure again and again. Then the elder monk retreated back to the grave. Then the grave suddenly opened with terrible sound and the ‘Hunderprest’ was swallowed in its deep pit. After the grave had opened and enveloped the priest in the warm earth, it had returned to normal as nothing had ever happened.

The elder monk knew then that he was dealing with a true vampire. Immediately he took action. He told his three companions of what occurred and to open the grave on the first light of the coming morn, which they agreed. They waited through the dark of night, only to dispatch one of the novices to bring digging tools from the abbey, which was used upon the cock of a crow. Upon the opening of the grave the vampire priest was lying in his coffin dead to the world grinning with bloody lips, the blood of his victims. Then elder monk ordered his companions to remove the body, and place it on the ground; then to burn it and scatter the ashes in the gusty winds.

Today there are those of the town that vow they can still hear a muted scream through the ruins at the dark of night of a man in a different form who in life had seemingly walked a godly life. 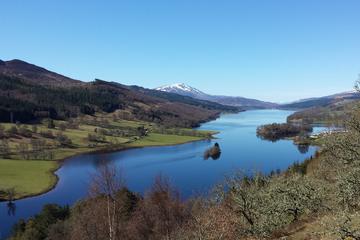 Best of Scotland in a Day Small Group Tour from Edinburgh

Melrose has a rich history, with architectural attractions, museums and exhibitions including the oldest continuously inhabited village in Scotland. Melrose has plenty to see and do – the town and nearby woods and fields have stunning scenery, several walks and cycle rides. The town has an extensive range of shops, as well as accommodation for visitors and excellent local services
For additional information check out the Melrose page of the Visit Scotland website.

Other sites of interest include: Nearby is the Roman fort of Trimontium, and Dryburgh Abbey. King Arthur is supposedly buried in the Eldon Hills, which overlook the town. Melrose was home to Sir Walter Scott (nearby Abbotsford), on the banks of the Tweed River. A popular attraction is Thirlestane Castle, one of Scotland’s oldest; it was built in the 13th-century and to this day it serves as a family residence.

About the author:
Norman R. Rubin is a former correspondent for the Continental News Service (USA), now retired – busy writing stories and articles for Net sites and magazines worldwide. See ‘ igoogle.com ‘ under the author’s name for a review.

Photo credits:
First Melrose Abbey photo by Niki Vogt from Pixabay
All other photos are by Norman Rubin.