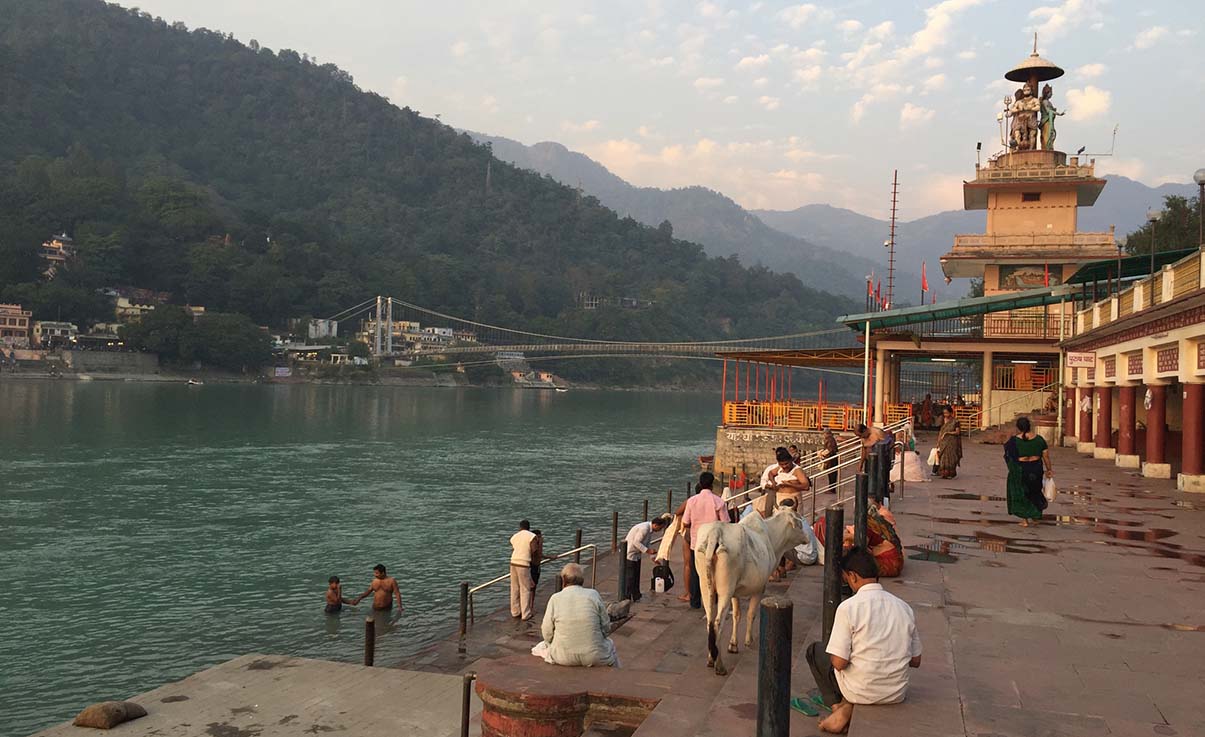 Back in 1968, music sensation The Beatles visited an ashram in Rishikesh, India. During their time there, they wrote over 50 songs and brought Eastern influences to the mainstream like never before.

Fifty years later, in September, I had the chance to visit some of the same sites as The Beatles on a tour called India – A Fusion of Colour, Music & Soul.

The adventure was led by Paul Saltzman, a two-time Emmy Award-winning film and television producer-director. Paul actually spent time with The Beatles during their original visit to Rishikesh and has now visited India more than 60 times.

Our goal was to retrace The Beatles’ footsteps, experience the culture and sites of India, and learn more about the intersection between East and West.

Our adventure began with a flight to Trivandrum, on the country’s southern tip.

Our first night welcomed us with dinner on the beach. What a way to start a vacation! Listening to waves crashing behind me in the darkness and savouring conversation with this high calibre group was an exciting and inspiring experience.

My first impression of India came on the second day as I made a trip to the local shopping mall. Upon entering the mall, I immediately realized I was the centre of attention. My blue eyes and silver hair made me the focus of many stares, something I had to adjust to very quickly.

Experiencing the beautiful backwaters of Kerala

As our tour continued, we made our way up the western coast via bus, landing in Alleppey. Here we embarked on a boat cruise through the rice fields and waterway villages, with wide eyes and complete attention. It’s hard to believe that the small homes clustered in bunches along the water’s edge are only accessible by boat.

That night, we stayed on old rice harvesting boats that have been converted into houseboats, complete with on-board kitchen and staff. The very same boats are featured in the James Bond film Octopussy.

In my opinion, the cooks on these boats served the most authentic food experience I have ever had. The dishes of fish, rice and vegetables were unlike any I had tasted before. The love the cook had for their job was evident in the food.

One fresh morning on these boats, I made my way up to the upper deck. From here, at daybreak, I witnessed the lightest rainfall I’d ever seen. The rain was obvious as the droplets hit the water, but I could not feel it on my face. It was as though there were thousands of invisible butterflies with sore feet landing on the water surface all around me. 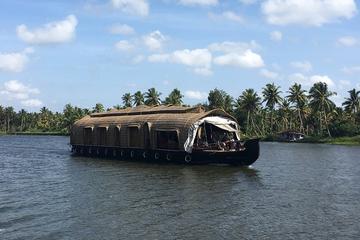 A taste of Indian traffic

As our trip continued, we made our way up the coast. With my seat at the front of the bus, I was in the perfect place to witness the cultural driving strategy of India.

When your taxi or bus enters a roundabout, you may look around and say, “Oh my, we are not going to get through this intersection for an hour.” But like fish swimming upstream during their spawn run, the vehicles, large and small, all come together. Like a slow moving dance with inches to spare, all make it through in far less time than you would ever have imagined possible.

Our next stop was Mumbai, the financial capital of India, with even more hustle and bustle. As you get off the bus, you literally feel like you are at the centre of a rock concert, finding your way through the mass of humanity.

A highlight of our Mumbai experience was a visit with Pandit Hariprasad Chaurasia, considered to be the foremost Bansuri flute player of his generation. Chaurasia toured and recorded with The Beatles’ George Harrison during the 1960s. After his solo performance, we watch him teach a class of students. One at a time, he worked with each of his students until he was happy with their progress.

From Mumbai, we flew to Udaipur, where we stayed at the incredible Taj Lake Palace. This hotel is in the middle of a scenic lake and is only accessible by boat.

I remember Paul expressing to me before the trip that if he could retire and live in only one place, it would be this hotel. After having experienced it for myself, I can say that I wholeheartedly agree with him.

What makes the location so tantalizing? The exotic locale, the detailed stonework, the extravagant garden courtyard, the inviting piano bar and more all combine into a one-of-a-kind experience. Two famous Indian experiences Our journey continued on to Jaipur. Here, we had the chance to experience the infamous hucksters of India on our ride up to Amber Fort, a magnificent construction of sandstone and marble. These hucksters are some of the most relentless selling machines on the planet! They speak many languages and I believe the word, “No,” to them means, “Maybe!” Though exhausting, these sellers are all part of the Indian experience.

Up next was Agra. Seeing the Taj Mahal at sunrise is now number two on my best experiences list (after the Grand Canyon).

This pinnacle of architectural artistry has a vibe you can feel as you walk around the property. The Taj Mahal is a mausoleum, built by Mughal emperor Shah Jahan for his favourite wife of nine, who died during the birth of their 14th child.

In Agra and throughout the tour, Paul’s passion for India was obvious and compelling. As he would take his perch at the front of the bus, he would share intimate details of his own experience in this vast country.

He would also share with us Indian folklore. One story that stands out is that of the Taj Mahal. A historical rumour about this structure is that the architect who build the Taj Mahal had his hands cut off by Shah Jehan to ensure he never built an even more beautiful structure. I found the history of this area of the world absolutely fascinating.

As we continued to Delhi, Paul shared with us the famous Akshardham Temple complex, an amazing world of Indian Hindu culture. Lavishly decorated with 20,000 statues, floral motifs, arches and exquisite carved pillars, the complex sprawls over 100 acres of groomed property. This complex took two billion dollars to build and five years to complete! Once in Delhi, we visited the city’s vibrant and chaotic markets. A rickshaw ride of a lifetime took us through the narrow streets. At times, the pathways seemed too tight for even just our rickshaw to pass. But somehow, two vehicles seemed to be able to pass one another in a strategic dance!

It was in Delhi that we visited Mahatma Gandhi’s last residence and the garden where he was assassinated. Here, they have traced Gandhi’s individual footprints on his last walk from the house to the garden archway.

As we stepped off the bus, we could feel that this is a special and sacred place. Our group went quiet without any direction to do so. We found ourselves wanting to whisper if we had to say anything at all.

A spiritual experience in Rishikesh

From Delhi, we boarded our first train ride on the vast railway system that holds some 25 million people at any one time. Travelling first class allowed us enough space to relax and process our travel experiences.

The train ride ended at Haridwar, from which we made our ways into the foothills of the Himalayas. The roads can be brutal, extremely narrow with many potholes, but it does not matter, as this part of India starts to crawl into your soul. There is an internal knowing that you are going somewhere sacred. Everyone can feel it, but it offers no conversation.

When we arrived in Rishikesh on the River Ganges, or as they call it, “The Mother Ganga”, the violent river mist whispered into the air that this was “the place.”

We had the opportunity to visit an ashram on the river bank and took part in a group meditation. Our class leader was Sadhvi Bagawati Saraswati, who visited the town of Rishikesh 25 years ago as a last minute add-on with friends while finishing her post-graduate schooling. The moment she touched the river with bare feet, she enjoyed a spiritual awakening and has never left. Originally from Beverly Hills, LA, Saraswati titles her story, “From Hollywood to Holy Woods.” The experience at the Parmarth Niketan Ashram facility was stimulating and inspiring, providing a perfect end to our trip.

I realized many years ago that life, for me, is an understanding that there are things we know and things we don’t know, but there is much more that we don’t know, we don’t know. I try to go there as often as I can. This India tour was a powerful way for me to expanded my perception of life. 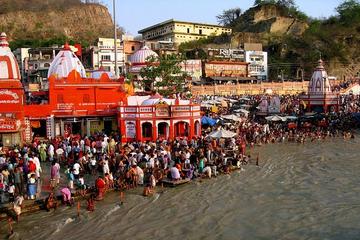 A Spiritual Trip to Haridwar- Rishikesh By Train and Private Car

Born and bred in Toronto, Canada, Tom has been an avid hockey player, coach, and passionate outdoor adventurer. He is the entrepreneur, marketing expert and lighting designer behind Regal Lighting Designs Inc., appearing on shows like HGTV’s “Decked Out” and “Ultimate Garage.” Herstad is also the author of Love, Care and Share, an inspiring autobiographical memoire about his late mother Margie which is now being turned into a movie. Learn more at www.tomherstadbook.com.

Richikesh photo by Val Do / CC0