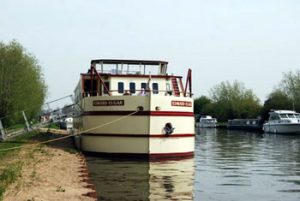 I recently took a short cruise on the Edward Elgar along the Gloucester and Sharpness Canal. This parallels the lower reaches of the river, which is tidal, so was by-passed by the canal. The canal also did away with ships needing to negotiate a dangerous bend in the river. They would sail through the Sharpness Lock, to be man-hauled along the canal to Gloucester. 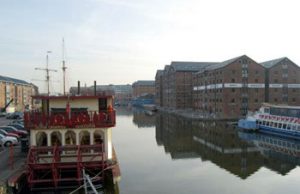 It was a ship canal, and therefore much wider than the usual English narrow-boat canal. So, it presented no obstacle to the 18-foot-wide Edward Elgar. Neither are there any locks, except at either end of the canal. There are swing bridges, but these are operated by professional bridge-keepers. Indeed, each bridge has a notice threatening dire penalties for unauthorised people attempting to operate it.

And, nothing was allowed to pass over the canal below 250 feet; which is a reason that the electricity pylons passing over it are twice the height of normal ones.

The task of hauling the ships along the canal was eventually taken over by draught horses … but not before a minor revolution, led by one Tom Jones. The men hauling the ships feared they would be put out of work, so sabotaged the horses by mixing herbs with their feed which gave them stomach pains and diarrhea.

Only a short walk from the canal is the world-famous Wildfowl and Wetlands Trust’s reserve at Slimbridge, which we couldn’t miss visiting. It was founded by the famous naturalist Sir Peter Scott, the son of the explorer Robert Falcon Scott. Here, a vast variety of waterbirds can be seen. Some of them are permanent residents of the reserve; others are migrants, free to come and go as they please … as they’ve been doing for centuries, before the Reserve was founded. 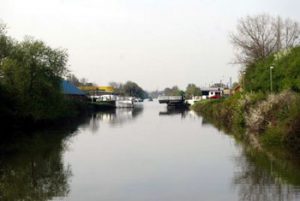 But, however far they travel, their instinctive memory brings them back to the Severn Estuary and Slimbridge, and the wetland habitat in which they thrive.

At Purton, the canal runs only a few paces from the Severn, and, in 1909, a collapse in the bank of the river called for a wall to be built, to protect the canal. But, it was no ordinary wall. The Chief Engineer, one A.J. 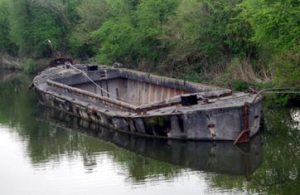 Cullis, arranged for several redundant ships and barges to be beached at high tide, and gradually fill with silt and form a wall, to protect the canal from further erosion.

Over the years, the hulks were added to. The most famous was the schooner Katherine Ellen, impounded in 1921 for running guns to the IRA. And, several concrete barges were added during WWII.

You would think, as many people did at the time, that such a vessel would go straight to the bottom … but, that’s precisely the same opposition faced by ironmaster John Wilkinson, when he launched the first iron ship boat in 1787! But, it worked; the Captain of the Edward Elgar recalled bringing a concrete barge down the canal to its final resting place in the early 1970s. 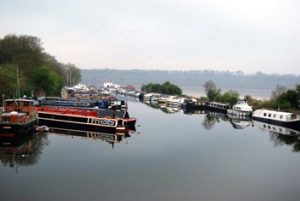 Early in the morning, I was able to inspect the Purton Hulks, as they’re called, more closely. I hadn’t intended to; I went to photograph the boat at its moorings, and forgot to take my key. But, we were moored only a few steps from the Hulks, and it was a good way to fill in the time until someone else got up, to let me in.

The ships aren’t forgotten; a plaque records the name of each, and some are sponsored by individuals and businesses in the area.

As we approached Gloucester at the end of our short cruise later that afternoon, we passed several dilapidated buildings on the canal bank; signs of former industry. But, there are still several timber yards on the canal banks, for timber, from the nearby Forest of Dean was Gloucester’s main export. The docks themselves have been refurbished and restored to house several businesses, including English Holiday Cruises. 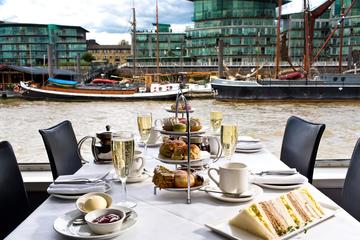 Gloucester can be reached by train from London (Paddington); trains leave approximately every hour, and journey time is about two hours. (www.thetrainline.com)
National Express coaches leave Victoria coach station, London, at about two-hourly intervals, taking approx. three hours en route. (www.nationalexpress.com)
Cruises along the Gloucester and Sharpness Canal and/or the River Severn on board the Edward Elgar (Capacity 22) by English Holiday Cruises (www.englishholidaycruises.co.uk)
Day cruises on the Eagle Spirit wide-beam canal boat … longer cruises are possible, but the boat only has accommodation for one couple. (www.cruiseeaglespirit.com)

Having written as a hobby for many years while serving in the Royal Air Force, Keith Kellett saw no reason to discontinue his hobby when he retired. With time on his hands, he produced more work, and found, to his surprise, it ‘grew and grew’ and was good enough to finance his other hobbies; travelling, photography and computers. He is trying hard to prevent it from becoming a full-time job! He has published in many UK and overseas print magazines, and on the Web. He is presently trying to get his head around blogging, podcasting and video. Disclosure: Mr. Kellett cruised on the Gloucester and Sharpness Canal as the guest of English Holiday Cruises.