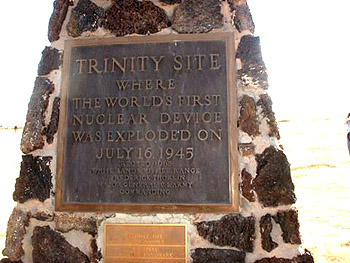 In 1939, Albert Einstein sent a letter (written largely by Leó Szilárd) to President Franklin Delano Roosevelt. The pressing concern was that Nazi Germany might be conducting research to create atomic bombs, and the letter suggested that the United States should begin researching the possibility itself. This was the impetus for the Manhattan project, which culminated in the explosion of the first atomic bomb at the Trinity Site in New Mexico.

Socorro, New Mexico, a little more than an hour’s drive south of Albuquerque, is one of the meeting places for those who plan to visit the Trinity Site. Socorro, from the Spanish word for “help,” has a long history. In late 16th century, the Piro-speaking Pueblo Indians had helped the Spaniards, who had emerged from the desert, giving them food and water. The city is still a help, providing lodging and services to the many personnel supporting the White Sands Missile Range. 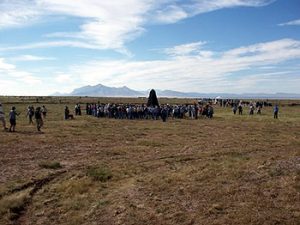 Declared a National Historic Landmark in 1975, the Trinity Site is near the north end of the Jornada del Muerto desert. This desert name often translates as “journey of the dead man,” the name the Spanish conquistadors gave to the 1660s northerly route from Mexico. The origin of the code name “Trinity” is uncertain. It is often attributed to Robert Oppenheimer as a reference to a poem of John Donne: “Batter my heart, three person’d God;—.” (Holy Sonnets XIV).

The entrance into White Sands is through the Stallion Gate. The Martin Cruz Smith novel of the same name suggests its origin from the Native Americans, who used to roundup stallions and trade them in the area. A local historian debunks that story. Many of the ranchers had left horses behind when they were forced to leave in 1942 and in 1945. The horses formed small herds and a stallion that was well endowed ran on the north end, hence the origin of the site name “stallion.” 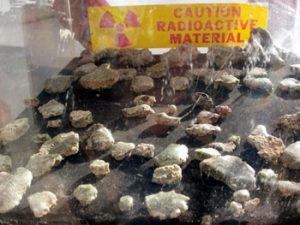 At Stallion Gate, guards record our license plate number and ID. Information on the route and site was given as were instructions of no photos until we got to Ground Zero.

The first leg is a southerly 14 mile drive into the desert, which is studded with scrub brush and yucca plants, many spouting to the size of large bushes. The grasses are greening due to fall rains. The desert is considered ecologically sensitive evident by the caliche clay, which can turn to a fine talcum powder like substance when trodden upon.

One of the animal crossing signs was unusual, which looked like a mule with horns. This sign was for the oryx, an African antelope, which the New Mexico Department of Game and Fish had imported from Kalahari Desert to an experimental range. The resulting oryx offspring were introduced between 1969 and 1977 at White Sands and the animals adapted very well in the desert, especially in the absence of their natural predator, the lion. Hence, this explained the posted signs along our route for designated hunting areas. A guard later explained that to cull the oryx herds there are depredation hunts at White Sands.

At an intersection, we turn toward the Sierra Oscura Mountains for the last three miles to the site. Like any big event, parking attendants guide us to a spot near the chain linked fence about Ground Zero. Non-profit vendors from the base Morale, Recreation, and Welfare group provide services from breakfast and lunch to souvenir items. Extra security, facilities for our comfort, and emergency medical personnel are available. We get our brochures, books, postcards or other items stamped to remember this day.

An information booth is at the entrance of the barbed wire corridor that leads to Ground Zero. We walk a quarter mile from the parking lot to the area secured by a circular chain link fence. A lava stone obelisk marks the center of the 100 foot tower on which the bomb had been placed. A brass plaque on the obelisk reads – “TRINITY SITE WHERE THE WORLD’S FIRST NUCLEAR DEVICE WAS EXPLODED ON JULY 16, 1945.” Near the obelisk, cordoned off by rebar or something like it, is a stub of what remained of one of the tower footings. 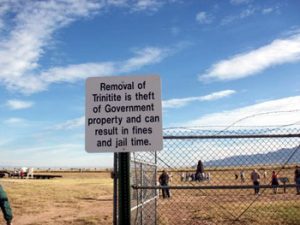 The explosion created a crater 10 feet deep and 1,100 feet wide, turning the desert sand beneath into a green radioactive glass called Trinitite. A shelter at Ground Zero now protects a portion of the original crater for future study. In the late 1940s and early 1950s, souvenir hunters and enterprising entrepreneurs scavenged the area for Trinitite. In response, the radioactive substance was banned from collection; the site was scraped and filled in, though some remnants remain. A sign at Ground Zero warns that theft of Trinitite can result in fines and jail time. Watchful guards give warnings, especially for those who are stooping down to pick up anything from the ground. Guides have enclosed displays of Trinitite, which was as close as the public is supposed to get to it.

In front of the obelisk, an older gentleman with a Geiger counter kneels down to take a reading. The chaotic clicks increased in frequency as he puts his counter to the ground. The soil is reportedly ten times more radioactive than similar areas in New Mexico. The information brochure gave assurances that radiation levels of cosmic rays from space at Denver, Colorado over a year were about a hundred times more than one hour of exposure at Ground Zero. 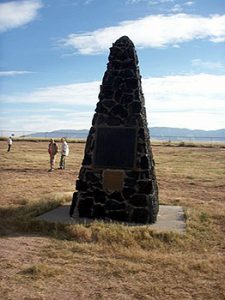 The polyglot of languages indicate many international visitors to the Trinity Site. The mood is somber and subdued. During the morning, more visitors circulate through the area, viewing the obelisk, the shelter protecting the original crater, and the casing of the Fatman bomb, whose type was detonated over Nagasaki, Japan. Historical photos from the set up of the test site, to snapshots of the first atomic explosion, and then news of the end of World War Two are hung on the chain link fence behind the obelisk.

In the parking area, shuttle buses take visitors to the McDonald ranch house, where the first atomic bomb was partially assembled. The master bedroom, aptly renamed the “Plutonium Assembly Room,” was where the two plutonium hemispheres, making up the “pit,” were put together. The final assembly was at the tower at Ground Zero a few days later. The farm house survived the atomic blast, two miles away, though its windows were blown out. The out buildings did not fair as well. Many are deteriorating and danger signs are posted about them.

As we leave White Sands through the Stallion Gate to the main road, a large green sign says “Trinitite for sale 17 miles” with a big arrow pointing right. Actually, the guides at the Trinitite display at Ground Zero – after warning us not to pick it up – had mentioned with a smile that we could always buy the forbidden Trinitite down the road.

We finish our experience at the Owl Café and Bar in San Antonio, New Mexico. As we eat their world famous green chili cheese burgers, we muse that over sixty five years ago this café had also serviced the workers who had prepared the Trinity Site we had just visited. 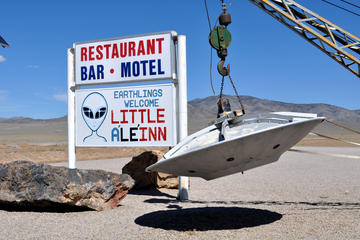 Located on the White Sands Missile Range, the Trinity Site is a restricted area and off-limits, with few exceptions. Twice a year the site is open to the public, the first Saturday of April and October.

About the author:
Susan K. Smith is a native of Montana, a second generation American, and a graduate of Montana State University and the University of Colorado. Her childhood experiences in rural Montana and work in the aerospace industry throughout the west have provided a rich source of material for her novels and free lance writing. She has recently published a novel as an eBook, “Samantha at the Crossroads” at www.synergebooks.com. Also, you can access her web site: www.smithsk.com for more information.

All photos are by Susan K.Smith.