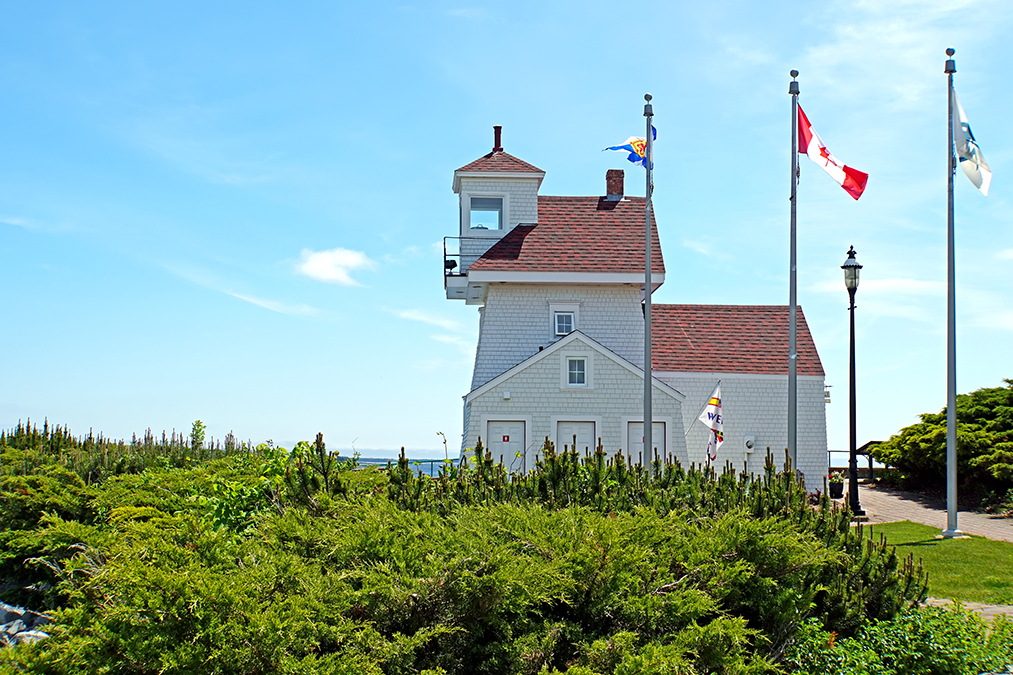 Visiting and photographing lighthouses, even collecting replicas of them are popular hobbies for many enthusiasts. In some locations, lighthouses have become popular travel destinations in themselves and the buildings are maintained as tourist attractions. Canada with its long rugged shore is an excellent country for enthusiasts to visit and photograph its historic lighthouses, the national heritages of the land. 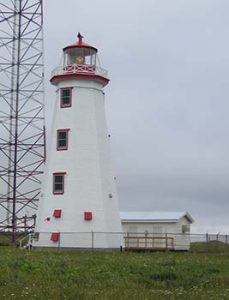 Lighthouses as we know are beacons built on towers with a system of lamps and searchlights at various dangerous coastal sites, hazardous shoals, and for a safe entry to ports. The earliest lighthouses in history were simply bonfires built on hillsides to guide ships. The most famous lighthouse in history is the Lighthouse of Alexandria in ancient Egypt at the port city of Alexandria, built in 285 B.C.. The first lighthouse on the North American continent was built at Boston Harbor in 1716.

The second-oldest lighthouse on the continent, and the first Canadian one, went into service at the French fortress of Louisbourg on Cape Breton Island in 1734. Now to our tour of the historical Canadian lighthouses under the auspices of Parks Canada, the official guardians of the national parks, the national historic sites and the national marine conservation areas of Canada.

‘Cape Spear Lighthouse’ has guided mariners approaching St. John’s safely with its beaming light. Historically recognized today and due to its age and architecture, the lighthouse has been restored to its original appearance and portrays the life of 19th century light keepers and their families. Visitors today can visit the restored lighthouse and see how a 19th-century light keeper lived and worked. At the Visitor’s Center and the Heritage shop one can view light keeping exhibits. One point to remember when visiting the site is that it is a hazardous coastline and one should keep to the marked trail to the lighthouse.

‘Mississauga Point Lighthouse’, the site of first lighthouse on the Great Lakes, a Canadian heritage site was built on Niagara-on-the-Lake, Ontario in 1804.

‘Port Clark Lighthouse’ located on lake Huron built between 1855 and 1859 is located on Lake Huron, thirty-five kilometers north of the town of Goderich played a vital role in the navigation of the Great lakes. The eighty-seven foot limestone structure is topped by a twelve-sided lantern. The light keeper’s house acts as a museum. 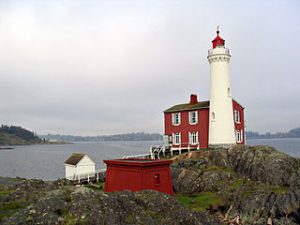 The ‘Fisgard Lighthouse’, the first lighthouse on the Canadian west coast, built in 1860, provides a guide for seafarers to the Royal Roads anchorage, Esquimalt harbor and its naval base, and directs the way to Victoria harbor. The Fisgard lighthouse commemorates an important symbol for the sovereignty of Canada. Visitors to lighthouse can enter the former keeper’s house, which now contains exhibits and a video station for an interesting tour. The harbor seals and the occasional sea lion frequent the waters around the site and put on an aquatic display of their natural talents.

The Bois Blanc Historic Lighthouse, constructed in 1839 played an important role in the navigation of the Detroit River. During border raids by Canadian rebel sympathizers it was strategically important for the defense of Fort Malden near the town of Amherstburg, Ontario. The Bois Blanc Island lighthouse served the navigational needs of the area until the late 1950s, when it was rendered redundant by new navigational aids. It was transferred to Parks Canada in 1961 for a tourist site. (At present the entrance to this site is unavailable due to vandalism.)

One interesting lighthouse is the ‘Lobster Cove Head Lighthouse’ built in 1897 at the entrance to Rocky Harbor and then to Rocky Harbor and the entrance of Bonne Bay, as it is still in service by Canadian Coast Guard. Yet the light keeper’s house is open as a park interpretive exhibit center detailing how people lived along this part of coast for more the than 4000 years. Original artifacts, historical documents and photographs are there to see which make the history come alive.

‘Pointe-au-Pere Lighthouse’ played an important role in safely guiding ships with its welcoming beams of light on the St. Lawrence River. The existing lighthouse, the third built on this site (1909) is the second highest in Canada. Managed together with ‘Musee de la Mer’, this historical site is a remarkable witness to the Canadian Maritime Past.

Whether you are a lighthouse enthusiast or not, a visit to a Canadian lighthouse can offer you an insight, an interesting point of the history of Canada, its kinship to the sea and the service the lighthouses maintained in guiding ships to a safe harbor.

1. There are literally hundreds lighthouses on Nova Scotia and Prince Edward Island alone that are highly recommend for enthusiasts for their interest and service to the shipping. www.nightcoaster.com/light/lhcanada.htm

2. Eight of ten Canadian provinces have a lighthouse, more than four hundred in all. Canadian lighthouses are set in a great variety of environments, along the rugged shoreline, entrance to harbors, in the rain forests of the Pacific coast; in the middle of a downtown park, etc.

Editor’s note: It was recently announced that most of these historic lighthouses will be closed down.

About the author:
Norman A. Rubin is a former correspondent for the Continental News Service (USA), now retired and busy writing articles and stories for Net sites and magazines worldwide – see ‘Google.com’ under the author’s name for a review of his written work.