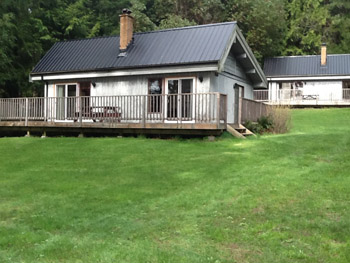 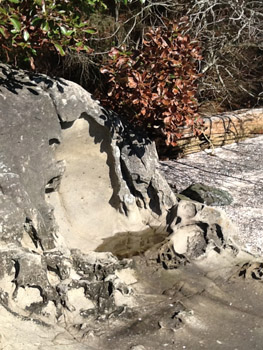 There are places that tell your body and mind to slow down; to let the world come to you in unhurried steps. Places as beautiful as they are restful, as intrinsically informative as a guided tour yet far from the madding crowd.

This is one of those places.

Thetis Island is one of the lesser known but no less appealing of the Gulf Islands of B.C.; an archipelago of emerald jewels resting off the coast of southern Vancouver Island amid the Salish Sea. Named after the 36 gun British Frigate H.M.S.Thetis which plied these waters from 1851 to 1853, the island is home to around 350 permanent residents. Its tranquility maintains itself through all seasons but is even more pronounced during the off season when you can share a spot on the shoreline with no one but nature’s critters.

The fair weather of late February saw us embarking on the BC ferry, Kuper Island, for the 25 minute scenic cruise from the tourist town of Chemainus to Preddy Bay, Thetis Island. Churning out from the harbour we were blessed with a hurried sweep below our bow by a pre-occupied cormorant. Even from a distance we could make out the tended pastoral grounds of Capernwray, the Bible College representing but one of 25 associated colleges spread through 20 countries. 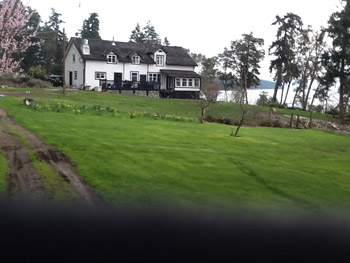 Though frequent visitors to the island this trip was a first for we had rented an oceanside cabin at Overbury Farm Resort. Still in the family of the original 1909 homesteader Geraldine Hoffman the farm, which originally gained renown for its eggs, became a resort in the 1930’s and pursues that legacy with manored elegance to this day. Our self-contained, modern cabin was a short forest walk to the gracefully aging and carefully tended manor house on Crescent Point, which owns a magnificent setting and ocean view, set amidst lawn, gardens and trees.

Our self catering cabin was blessed with a view over Preddy Bay to Vancouver Island’s multi- hued spine. The day view of harbour, islands and passing birds; the evening asparkle with the lights of Chemainus. In between we drank in the reddening glow of sunset.

A trail led to beach and shoreline. To our right spread the nature carved sandstone artistry for which the Gulf Islands are famed while to our left smiled the crescent pebble beach spreading below the manor house. If so inclined, the shoreline at low tide opens up a scenic stroll along Preddy Bay to the ferry dock. An early morning visit allowed me a stab at sketching while enjoying a sea side panorama complete with entertainment. Two Buffle Heads winged past in furious haste, their wings squeaking emphatically. An indifferent bald eagle soared gracefully above in every expanding circles. A river otter slowly pushed his way towards shore, disappearing underwater in silence shortly before reaching land. A float plane droned by. A lone sailboat caught the wind. The panorama set across Stuart Channel backed by the snow dusted Island mountains. Time passed slowly as I watched an incoming tide methodically widen its reach across the hollows and curves of the sandstone shore. The busy world of man seemed age away. 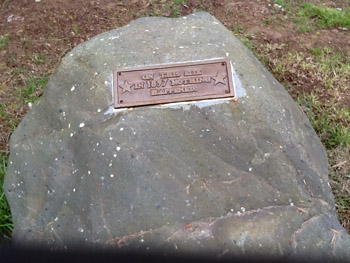 Owner Norm Kasting told us of a short cut trail through the forest to St. Margaret’s Cemetery and from there to the Capernwray grounds which cut off a good 30 minutes in our trek to the Telegraph Harbour Marina and Pub. As it is our wont to walk and explore we found our way to the cemetery and read, amid the tended lawn setting, how it was donated as a cemetery by early Island resident Henry Burchell in 1927. Its turf was even earlier turned to welcome the remains of a Burchell in 1924. It has since become the final resting place of a number the Overbury Farm-owning family, including pioneering Geraldine Hoffman.

One headstone remembers Arthur Jackson, a Thetis Islander who passed away from war wounds in Victoria in 1919. There too is recounted the memory of Daniel George Culver (1952 to 1993) the first Canadian to climb Mt. Everest and K2. His adventurous life ended in Pakistan but his legacy included the purchase and preservation of nearby Jedediah Island as a marine park. 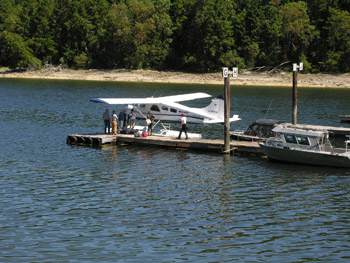 A gateway opened to the grounds of Capernwray and access to wide grinning Preddy Bay beach where you can wander and explore with tended grounds behind and Vancouver Island panorama before. Capernwray asks that if you wish to enjoy walking their idyllic grounds that you check in at their office behind Preddy Hall. The whitewashed hall stands singularly elegant at the centre of the grounds. And walking their grounds is worth it. There are cared-for lawns with gardens, ponds and visiting Canada Geese, sedate Holstein cattle dotting the greens and views out to Chemainus from whence you can spot the ferry leisurely making its endless crossing. Capernwray offers the opportunity to dine at their hall, which dates back to 1927, along with the students. (Call to reserve 250-246-9440).

After a healthy jaunt the refreshments afforded at the Thetis Island Marina and Pub are most welcomed. Though the kitchen is closed over the off season there are some non-cooked options and always a brew or coffee available. Inside or out the view over Telegraph Harbour is compelling. The long finger of sea rests between Thetis and Penelekut Island, long the home of the Penelekut Nation. In late Spring you can watch the gathering of eagles for the rituals of mating, teaching the young and socializing. They dot the trees of the opposite shore and cavort in the spaces between. 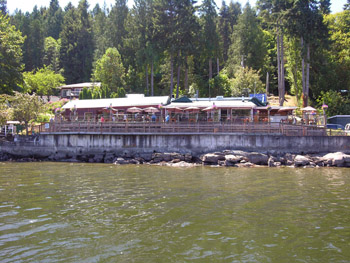 A stroll along Foster Point Road to the south of the island takes you past a massive Arbutus tree compelling the road to go around it. Grand as it is it is but second best to another, which rests near the community hall, and is acclaimed the largest Arbutus in B.C. A spider network of paved and unpaved roads offers up miles of leisurely strolling and exploring.

For hardy cyclists with thighs of steel the island affords challenging hill climbs with vistic rewards. We opted for motorized travel to climb Pilkey Point Road and take in the view from Pilkey Point. Here the sandstone sculpted shoreline is made for scrambling and vistas of the snow capped Coastal Mountain Range. An ideal place for the avid photographer to catch an early sunrise etched against the serrated teeth of the mainland peaks. 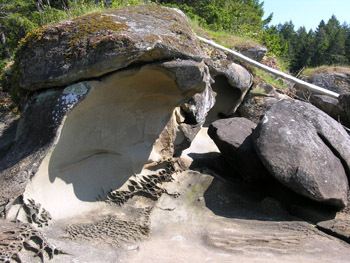 A quiet inland hike can be picked up near the one room school house. Here the solitude of an enveloping forest can hush the busiest of minds.

To enhance a longer island stay you can always take in the famed live theatre at the purpose built Chemainus Theatre which is but a short walk from the ferry terminal, stroll about town taking in the many famed wall murals depicting its vibrant history, put in a round of golf at Mount Brenton Golf course or explore short hiking trails all without need of a car. For scuba divers there is the sunken Boeing 737 jet harbouring its unique menagerie of sea life.

Our goal had been to leave the world behind for three days and live without a schedule in an idyllic setting. In this Overbury and Thetis met our desires. Waking to views, tranquility, the chirping of birds and an unhurried raccoon rumbling across the lawn with an ocean vista backdrop our goal was amply met.

♦ Thetis can be reach by ferry from Chemainus
♦ Seair provides daily float plane service, from the pub at Telegraph Harbour, to and from Victoria and Vancouver
♦ There is limited shopping on the island, being largely restricted to the small convenience store at the marina pub however there is a grocery store, the 49th Parallel, beside the ferry dock at Chemainus.
♦ Overbury Farms Resort is hosted by Norm and Arlene Kasting
♦ You can pick up a handy Thetis Island map at the tourism information office at the Chemainus downtown parking lot on Willow Street.