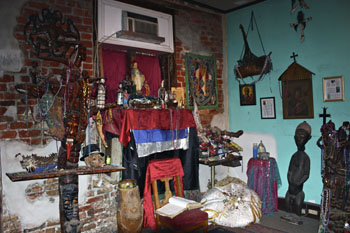 The lifeblood of New Orleans is Mardi Gras, jazz, jambalaya and gumbo but “The City That Care Forgot” also has a spiritual side to it – voodoo. This religion was first brought to the Big Easy between 1806 and 1810 when slave ships were re-routed from Santo Domingo (present day Dominican Republic) to New Orleans during the Servile Wars. To their surprise the new slaves found that New Orleans had only one legally sanctioned religion which was Roman Catholicism. Furthermore the Code Noir, introduced by the French Government in 1724, required that all slaves be baptised Catholics. How did the newcomers solve this dilemma? They adapted their own religion to that of the Catholic Church by matching voodoo spirits (loas) to the various saints. Technically this meant that only Catholics could practice voodoo in New Orleans.

Our curiosity piqued as we entered the New Orleans Voodoo Museum to purchase tickets for the voodoo walking tour of the French Quarter. Our senses were challenged by the smell of incense and the sound of eerie music saturating the air as we visited the supernatural displays. The bizarre voodoo paraphernalia included several altars topped with offerings of paper money, coins, tobacco products and alcohol and a large orange and white snake used in some rituals. 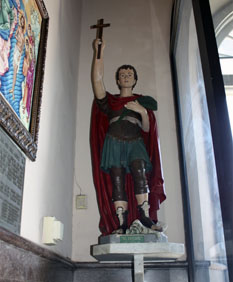 Statues of saints seemed more out of place than the skeletons because this was no church. Then there were the voodoo dolls. Voodoo practitioners believe that voodoo dolls don’t just represent someone but actually become that person when a personal item such as a lock of hair or fingernails is added.

A sketch of a zombie conjured up an image of a hoard of zombies whose decaying corpses creep around in the misty dark of night seeking to devour the brains of the living. “Hold on there before your imagination gets carried away” said our tour guide NU’awlons Natescott. “There were no zombies in New Orleans. If you want to find a zombie in New Orleans you should go to the nearest bar and buy the drink.” He said that 70% of the things you hear about voodoo is actually hoodoo (a con game). What people think they know about zombies is the result of what hoodoo has portrayed them. He also indicated that a real zombie (those found in Haiti) might eat your brain but only if it was cooked. 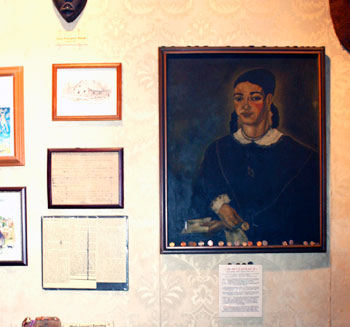 Our education continued when our tour guide reported that New Orleans voodoo is synonymous with voodoo queen Marie Laveau (1793-1882), whom he referred to as a free woman of color. NU’awlons pointed up at her picture on the wall as we left the museum to begin the walking tour. She was at the height of her power/influence in the 1850s. Although she was not psychic she had built up that reputation by collecting gossip when she visited various houses in the French Quarter to braid women’s hair.

At the age of thirteen, Marie had a daughter named Marie Eloise who looked so much like her as she grew older that people could not tell them apart. This created the impression that the elder Marie could be in two places at the same time. Marie Eloise would eventually succeed her mother as the Voodoo Queen of New Orleans. 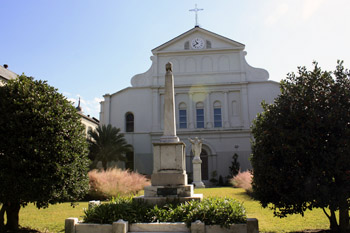 Our first stop was the St. Louis Cathedral but not to visit the interior. Instead we walked outside to the rear of the building where we found a small garden fenced off from the public. Peering through the wrought iron fence we saw a statue of Christ with raised arms. Marie Laveau was a member of this church congregation and she was known to perform voodoo rituals in this garden.

We then crossed the French Quarter to the former site of Marie Laveau’s home. Her house was torn down in 1903 and replaced by the present structure. Marie was known to have performed voodoo rituals in the back yard but we were not able to view this area. 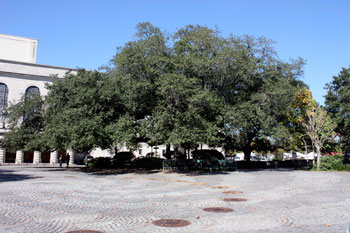 We crossed Basin Street and entered the neighborhood of Treme to visit Congo Square in Louis Armstrong Park. Creole slave owners strictly enforced the practice of Catholicism but the slaves circumvented this by gathering at Congo Square each Sunday (their one day off during the week under the Code Noire) to sing and gyrate to the rhythm of drum beats. They also participated in voodoo rituals.

Inside the park we found ourselves surrounded by shady and gnarled oak trees. Coincidentally we could hear drum beats in the background but were never able to locate the source of the drumming. Looking down we found ourselves standing on a number of spiral-like patterns constructed from inlaid bricks. With a little imagination you could almost see a group of people dancing on top of these designs. 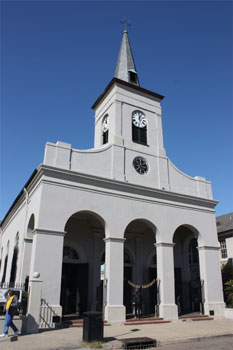 After you find your inner beat, leave Congo Square and visit the nearby Our Lady of Guadalupe Chapel. This church boasts a number of local voodoo practitioners among its congregation but you likely will not be able to identify them because they look just like anybody else.

Just inside the front door of the chapel on your right you find a statue of a Roman soldier holding a crucifix. This statue was originally found inside a crate labelled with the word “Expedite.” Since no one could identify who this statue represented he became known as St. Expedite. The Catholic Church has never canonized any saint bearing the name of Expedite so this statue had no one praying to him for his intercession. Slaves at that time adopted him and he has been worshipped by voodoo practitioners and local Catholics ever since. 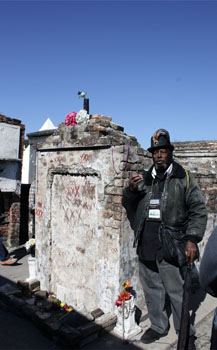 Exit the Chapel and proceed to St. Louis Cemetery #1. The living is admitted free but the families of the dead must pay to maintain the upkeep of all the above-ground tombs that surround you. The French had a custom of interring people above ground because they did not want to have buried coffins rising to the surface and falling open because of the high water table and flooding for which the Crescent City is famous. With a little imagination you have the making of a good horror movie where the zombies rise from the open coffins in search of the living.

Your mission, if you choose to proceed inside the city of the dead, is to find the tomb of Marie Laveau. Look for a dilapidated red/brown brick structure covered with many sets of three handwritten Xs on its surface. You many also find coin offerings left by visitors in the hope that Marie Laveau will grant their wishes.

People often confuse Marie Eloise’s tomb with that of her more famous mother. In fact, for this reason, Marie Eloise’s tomb is the second most frequently visited grave in the U.S. behind that of Elvis. If you are able to locate this structure you will find that it is in better condition than that of the elder Marie.

Our tour ended at this site. After wandering around in search of the exit, we took the opportunity to find a Zombie but since we had stopped at Pat O’Brien’s we had to settle for a Hurricane instead, something else that New Orleans is famous for. 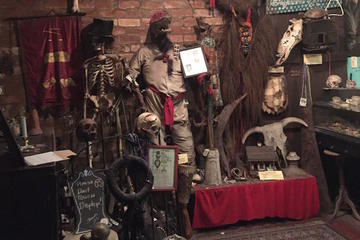 ♦ The New Orleans Voodoo Museum is located at 724 Dumaine St. You can purchase your Voodoo Tour ticket here. It was $19 at the time of my visit and includes admission to the museum.
♦ St. Louis Cathedral is located at Jackson Square.
♦ The former site of Marie Laveau’s home is 1020-22 St. Ann Street
♦ Congo Square is situated in Louis Armstrong Park which is located at 835 N. Rampart St. Admission is free.
♦Our Lady of Guadalupe Chapel is located at 411 N. Rampart St.
♦ St. Louis Cemetery #1 is located at Basin and Conti Streets. To find Marie Laveau’s tomb enter from Basin Street and proceed to the side wall on your far left and then turn right. You pass three tombs on your right before you see that of Marie Laveau. Do not visit the cemetery after dark as people have been attacked here (by the living).
♦ If you wander around a little in the area between the elder Marie’s tomb and the Basin Street entrance you might find a small aluminum disc on the ground with the #3 on it. You will know that Marie Eloise’s tomb is nearby when you find it this disc. Look for the sets of triple Xs on the whitewashed tomb.
♦ Pat O’Brien’s is located at 718 St. Peter St.
♦ If you wish to purchase that perfect voodoo souvenir, there are number of voodoo shops located around the French Quarter. Just take a leisurely stroll and you are sure to pass by one. Just look for names like Marie Laveau’s House of Voodoo and Reverend Zombie’s House of Voodoo. Marie Laveau’s House of Voodoo is located at 739 Bourbon St. Reverend Zombie’s House of Voodoo is located at 723 St. Peter St.

All photos by Diane Gagnon, a freelance photographer who has traveled extensively in North America, the Caribbean, Europe and parts of South America. Her photographs have accompanied Troy Herrick’s articles in Live Life Travel, Offbeat Travel and Travel Thru History Magazines: