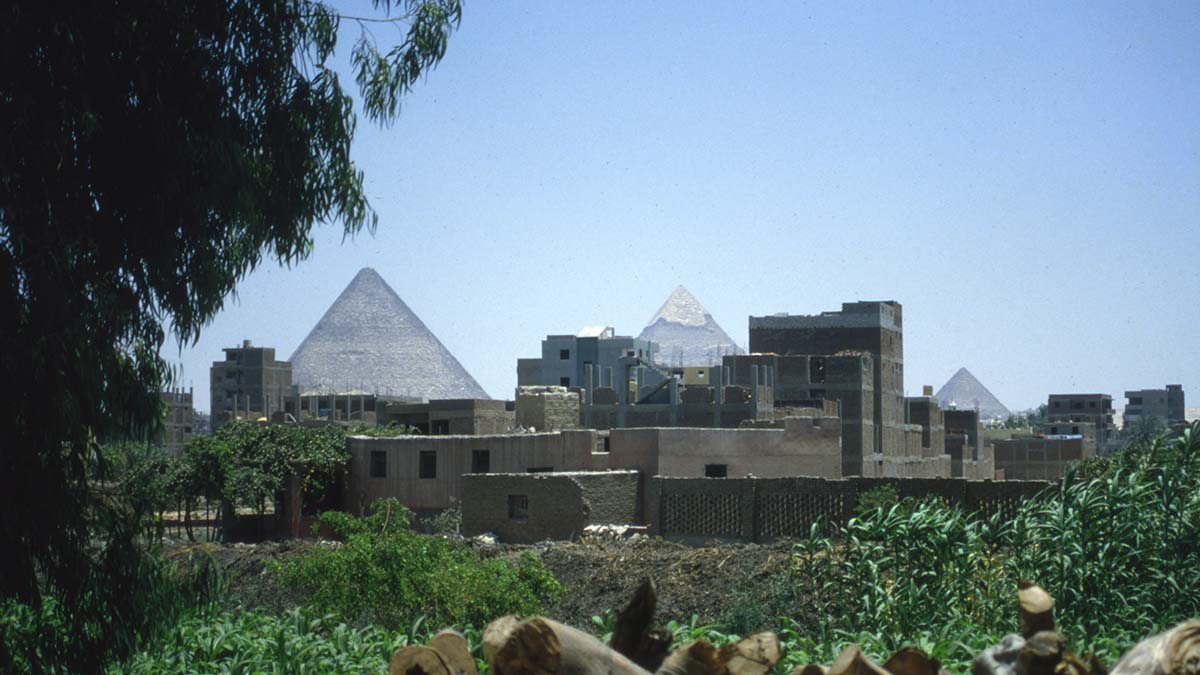 Visit to the Fascinating City on the Nile 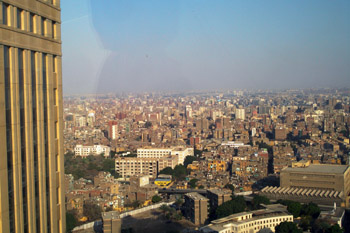 The first thing I noticed as we drove in Cairo from the airport, were the miles and miles of densely built apartment blocks, many of them half-finished stretching out from the Nile as far as you could see. Laundry fluttered from some of the balcony but there were just as many that appeared empty. The Egyptologist with our group of Canadian travel writers explained that this was part of the reasons for the first revolution – the overbuilding on green space, a corruption.

Cairo is the capital of Egypt, and the largest city in the Middle East with a population of about 7 million people. Of course there are areas of the city that look run-down. There are other more affluent suburbs of the city. Cairo’s modern ‘downtown’ is on the east bank of the Nile. It was built under the influence of French architects and there are many beautiful mosques as well as Coptic sights to see there. On the west bank of the river are the great Giza pyramids and farther south, the archaeological sites of Memphis and Saqqara. 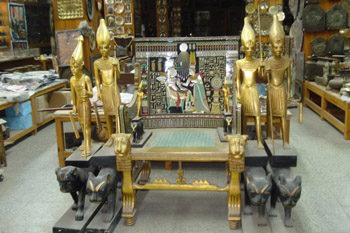 As a female solo traveler, I would not want to venture alone to Cairo, although I’d certainly not hesitate to return to this marvelous country in the company of a tour group. Did I feel any danger in Cairo? In spite of the two revolutions and the pending elections at the time I was there, and the spate of unfavorable media coverage about Egypt, travel warnings from embassies, that has diminished their tourism by 90%, I felt no sense of danger. In fact, there was good security in place everywhere. And what impressed me so much was the people. I have never met such gracious, generous, friendly people anywhere before. Young, old, men, women and children approached me and my travel companions on the street with smiles. “Welcome! Where are you from? Welcome to Egypt!” These are proud people, open and friendly, who walk with a noble stance, proud of their country and heritage and greet you with welcoming smiles.

The only real ‘danger’ in Cairo was the traffic. They drive like maniacs, weaving in and out with no regard for lanes or right of way, always with their hands on the horns blaring their way through the chaos. I learned not to look out the front of the van window after several heart-stopping moments. Our driver, Magdi, was an expert and managed to get us everywhere safely. 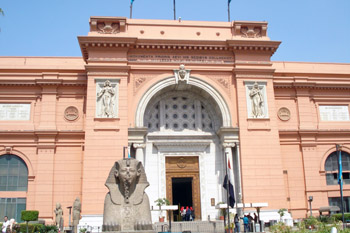 One of the main interest for me was the Egyptian Museum located right near Tahrir Square. The museum contains the world’s most extensive collection of pharanoiac antiquities. I saw the King Tut exhibit when it was in Seattle but those treasures were insignificant compared to what you will see on display here: magnificent golden chariots, precious jewelry, and countless other incredible treasures as well as coffins, mummies and other artifacts from prehistoric through the Roman periods The museum houses approximately 160,00 objects in total. I was told they plan to build a new museum so that more of the treasures can be displayed. 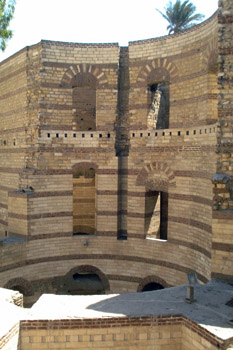 In Old Cairo we visited several churches including the oldest Greek Orthodox Church and the Ben Ezra Synagogue which dates from the 9th century and is the oldest Jewish place of worship in Egypt. We also visited the 4th century Hanging Church which is built on the bastions of the ancient Roman wall and ‘suspended’ above the level of the Nile. In one of the oldest Coptic churches in Egypt we entered the crypt-like area below where there is a small room that is supposed to have been where Mary and Joseph and the baby Jesus found shelter when they fled to Egypt. Old Cairo also had an excellent bazaar for buying souvenirs, some very expensive and others modestly priced including furniture and jewelry.

While we were in Cairo we visited several other important sites outside the city including Giza and the sphinx, Memphis and Saqqara. 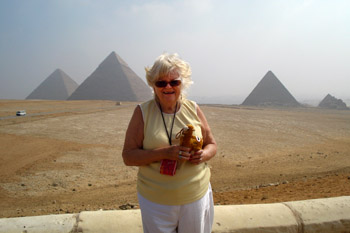 Giza is located to the west of Central Cairo not far from the ancient cities of Memphis and Saqqara. The pyramids include the great pyramid built for the pharaoh Cheops in the 4th dynasty and the slightly smaller Pyramid of Chephren date from around 2500 BC. There are also the Pyramid of Mykerinos and some smaller pyramids built for the kings’ families, The Great Pyramid of Cheops immortalizes the son of Snerferu and Hetpheres. This pyramid is the largest of the three, comprised of 2.3 million stone blocks each weighing an average of 2.5 tons. How on earth did they move these stones to build a monument so high as this? This is definitely one of the ‘wonders’ of the world! In fact, the pyramids of Giza are the last remaining Seven Wonders of the World.

Great Sphinx has stood guard over the pyramids for more than 4500 years. It is carved from an outcrop of rock and remains the ultimate symbol of Ancient Egypt with its lion’s body and human head. 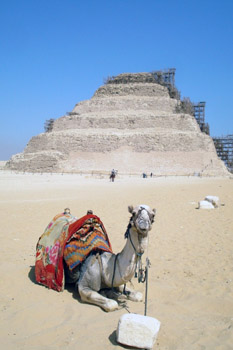 Most of the remnants of ancient Egypt lay scattered on the desert plateau south of Cairo. After visiting the amazing pyramids of Giza we went to see the amazing necropolis at Saqqara and the Step Pyramid of King Djoser. This is the largest necropolis in Egypt, extending for almost five miles. It’s a collection of pyramids, temples and tombs including the Mastaba tombs where the high officials of the Pharaohs were buried.

The Step Pyramid is the oldest pyramid found in Egypt, over 2,000 years. It is the oldest structure in the world build entirely of stone. It is 62 metres high and the base measures 109 by 125 metres. The burial chamber of the Pharaoh was located at the centre of the pyramid at the bottom of a large vertical shaft 28 metres deep. From here a labyrinth of rooms, corridors, chambers and passageways protected the tombs. 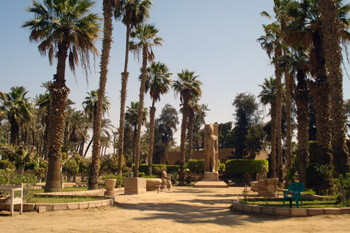 Farther south, is the ancient royal capital of the pharaohs, Memphis. According to legend it was founded by pharaoh Menes around 3000 BC and was the capital of Egypt during the Old Kingdom, remaining an important city throughout history. During the 6th dynasty it was a centre for the worship of Ptah, the god of creation and artworks. There is an alabaster Sphinx guarding the Temple of Ptah that is a memorial of the city’s former power and prestige.

When Alexander the Great came to Egypt he wanted to establish a city. Memphis was too far inland, south of the delta, so he chose the site by the sea that is now Alexandria. When Alexander died in 323 BC, his illegitimate half-brother Ptolemy came to Egypt to establish the city of Alexandria. For a time he kept Alexander’s body at Memphis but it was later moved to the new city. This began the Ptolemaic dynasty of Egypt. Ptolemy established the cult of Serapis in Egypt at Saqqara. Memphis thrived until the arrival of the Romans when it lost its importance in favour of Alexandria. 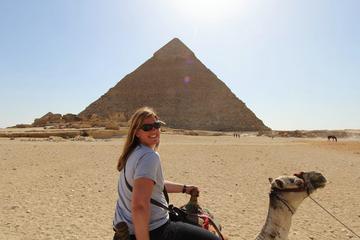 3-Day Private Sightseeing Tour of the Pyramids, Cairo and Alexandria from Cairo

♦ I’d highly recommend the services on land and river of the Escapade Travel who offer professional, friendly service.

♦ I stayed at the Fairmont Nile City My room was on the 19th floor overlooking the river so I enjoyed the beautiful view and pleasant surroundings. The service at the hotel was superb and the staff most congenial and friendly. There is a pool on the roof of the hotel. There is also a spa and fitness centre, casino, exquisite dining rooms, bars, movies and shopping area.

About the author:
Ruth has been a travel journalist for over thirty years, and recently published her first historical fiction novel SHADOW OF THE LION: BLOOD ON THE MOON, Volume One of a two-book story about the fall of Alexander the Great’s dynasty, now available on Amazon.com. Her research included the founding of Alexandria. So when Ruth was invited on this special press trip, courtesy of Egyptian tourism, it was a dream come true. She saw all the sights from Aswan to the Red Sea and besides this fascinating stay in Cairo, she even had her own tour of the great city of Alexandria. See Ruth’s blogs at travelthroughhistory.blogspot.com, shadowofthelion.com and her website at www.ruthkozak.com 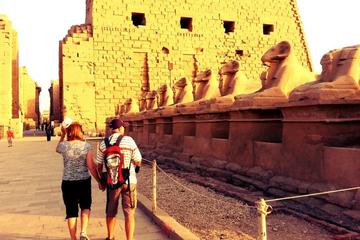 Photo credits:
Pyramids from Cairo by Brett Jordan on Unsplash
All other photos are by Ruth Kozak:
View of Cairo
Old Cairo Bazaar
Egyptian Museum
Hanging Church
Ruth at the Pyramids
The Step Pyramid
Memphis