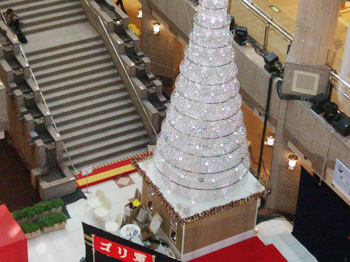 It was October when I visited Japan. Even though Christmas was still two months away I was surprised to discover that shopping malls and department stores were already getting into the commercial Christmas spirit. I was delighted by giant red and green Christmas tree shapes on the sides of office towers. I was awestruck by a glittering floor to ceiling tree of blue and gold lights in the atrium of a Tokyo shopping mall. I was charmed by sparkling lights displayed with a brilliant Japanese sense of aesthetics.

As a teacher of English as a second language, I have also learned from my Japanese students that Christmas in Japan is quite different from the western idea of Christmas. Rather than being a time for family, it is a time for couples and romance, while family celebrations are reserved for the much more traditional Japanese New Year.

Even though Japan is not a Christian country, Christmas actually has a fairly long history there. Jesuit missionaries introduced the celebration of Christ’s birth to Japan in the sixteenth century but public celebrations ceased when Christianity was outlawed by the Tokugawa Shogunate in 1635. Christianity remained illegal until the Meiji restoration in the nineteenth century when the emperor opened Japan to the west and laid the foundations of modern Japan.

Although less than 1% of the Japanese population is Christian, and December 25 is not a public holiday, Japanese retailers have eagerly adopted the commercial aspects of the season.

Some cities hold Christmas markets to attract visitors. Many people attend Christmas parties while others deal with the accumulated stress of the previous year by getting drunk at December bonenkai, or “forget-the-year” parties. As Christmas Eve is considered a night for romance, many couples dine at expensive restaurants on December 24. Some Japanese put up Christmas trees in their homes and exchange gifts, and it is popular to eat “Christmas chicken” from Kentucky Fried Chicken. Christmas cake is also popular. However, rather than a traditional heavy western fruit cake, this is a light sponge cake decorated with cream and fresh strawberries.

While Christmas is considered a day for young people, drinking, and romance, New Year is a more sober family time.

This ancient celebration is steeped in traditions linked to both Shinto and Buddhism. People who have moved to large cities to work frequently travel home to be with their parents and other family members. Many houses display shimenawa, braided straw ropes which show that the home has been purified and is ready to welcome the kami, or Shinto god spirits. Kadomatsu, which are decorations made of pine and bamboo, may also be displayed to welcome the kami.

At midnight on December 31, Buddhist temples ring bells to welcome in the New Year. The bells are rung 108 times to remind people of the 108 human desires which they must renounced to attain a state of holiness. Many people stay up all night to welcome the new year and to pray to the rising sun. On New Year’s Day, most families visit Shinto shrines to pray for good health and happiness in the coming year.

A popular activity at the temple is the purchase of paper fortunes, known as o-mikuji, which provide detailed predictions concerning health, money and love prospects for the coming year.

Traditional food associated with New Year includes soba (buckwheat noodles). The long noodles are believed to represent long life, and are eaten on New Year’s Eve for good luck. It is, however, considered bad luck to eat soba after midnight.

Osechi ryori is a traditional family meal which is eaten on New Year’s Day. Since tradition dictates that nothing should be cooked on New Year’s Day, osechi consists of various pre-cooked, pickled and salted dishes that can keep without refrigeration. These are prepared ahead of time and packed in special meal boxes.

One specific traditional New Year’s food which keeps for a long time without refrigeration is mochi or pounded sticky rice cakes.

I had a personal run-in with mochi while staying in the home of friends in Japan. My hosts served a stew containing some innocent-looking white cubes which I assumed were tofu. Of course, one of the cardinal rules of travel as well as other aspects of life is “never assume.” I picked up one of the cubes with my chopsticks, placed it in my mouth and chewed. Assuming that I had softened it sufficiently, I attempted to swallow it, only to find that it stuck in my throat. It cut off my breath and refused to move either down into my stomach or back up into my mouth. After a few seconds of panic, which at the time seemed as long as the entire 5,000 year history of the Japanese empire, I managed to bear down sufficiently with my throat muscles to force the offending cube down into my stomach before my face turned blue. As I did so, I seem to remember my hostess casually mentioning something about taking care with the mochi.

Because these little cakes are so chewy and glutinous, I was hardly surprised to learn that there are newspaper reports every New Year of people, particularly the elderly, choking to death while eating them. The Tokyo Fire Department even considers the danger serious enough to issue a warning about eating mochi alone.

On a happier note, New Year is a time to give beautifully decorated otoshidima or money envelopes to children, and to play traditional games such as badminton, spinning top and a card game known as karuta.

The best way to travel from Tokyo to other major cities, such as Osaka, Kyoto or Yokohama, is to use Japan’s excellent railway system. Trains are both clean and punctual. Also, the system is relatively easy to navigate as signage is posted in both Japanese script and the Roman alphabet. I recommend that you purchase a Japan Rail Pass from your local Japanese embassy or consulate before you go.

Photo credit:
Tree of Light in a Yokohama Shopping Mall by Michael Hebert

About the author:
Lesley Hebert is a graduate of Simon Fraser University. Now retired from teaching English as a second language in the classroom, she teaches ESL to international students via Skype. She also writes on-line articles which reflect a lively, enquiring mind and a love of travel, language, history and culture.