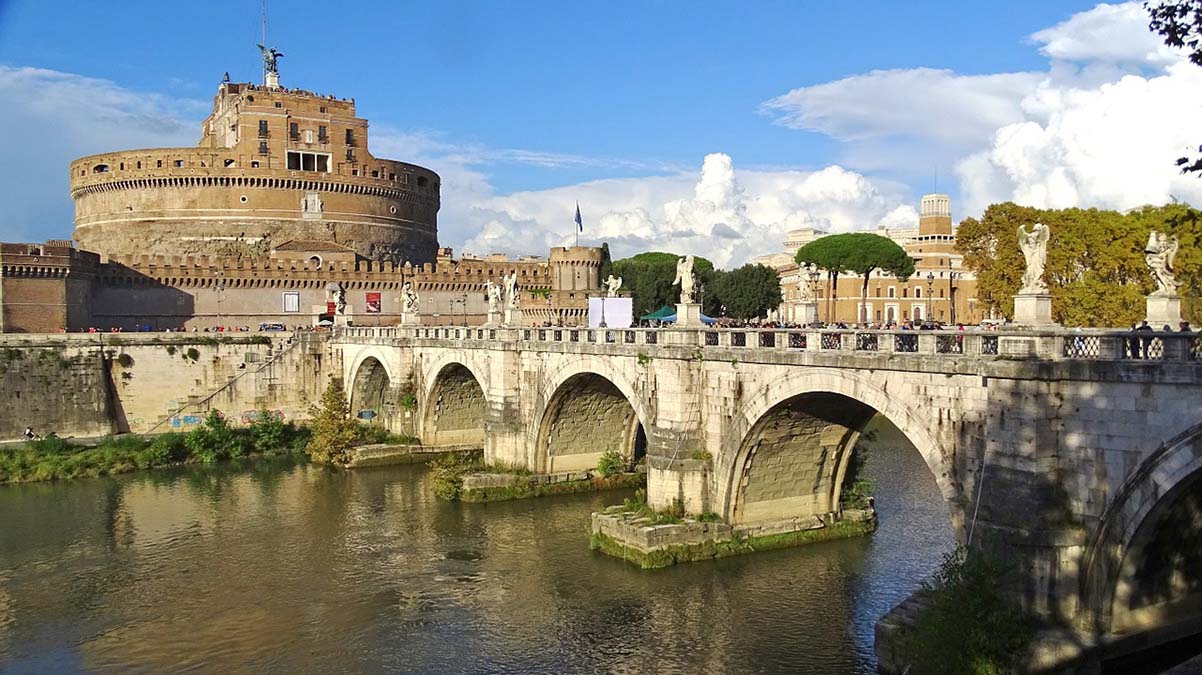 The success of the movie Angels & Demons

has had a major impact on sightseeing in Rome. A number of companies now advertise an Angels and Demons Tour to some but not all of the settings depicted in the movie. Unfortunately for the budget traveler, the cost usually exceeds €50 per person. 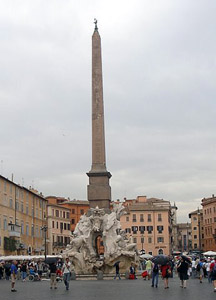 Alternatively, you can take the two-day “do-it-yourself” tour outlined below and visit all of the movie locations. You will not visit sites in the same order as Robert Langdon and Vittoria Vetra but you will enjoy more time at each location.

As long as you don’t mind some walking, you will pay less than the price of a commercial tour. Costs will be limited to subway travel as needed and admission to three sites – the Vatican Museum, the excavations under St. Peter’s Basilica and Castel Sant’Angelo. 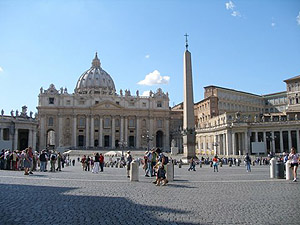 Day One of your quest along “the Path of Illumination” begins with St. Peter’s Basilica. Inside Christendom’s largest church, you feel small and insignificant. You are surrounded by larger-than-life statues and mosaics; dwarfed by Gianlorenzo Bernini’s massive bronze baldachin sheltering the high altar.

A stairwell in front of the high altar leads down into the Papal crypt. While you are not permitted down these stairs, the landing where the Camerlengo set himself ablaze in the movie is clearly visible. Also in the landing you see St. Peter’s icon peering out from a window. His tomb, which you will see on Day 2, is hidden behind that wall. Next, walk to the Egyptian Obelisk at the center of St. Peter’s Square. Bernini encircled this obelisk with a series of white elliptical bas reliefs. The “West Ponente” is an angel blowing air. The air points to the “the Path of Illumination – air”. Langdon found the dying second cardinal in St. Peter’s Square. 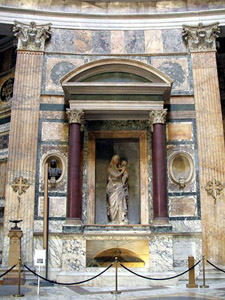 Do not follow “the Path of Illumination” however. Instead, pass the remainder of your day at the Vatican Museum. The priceless museum collections are so extensive that one day is not enough time to really appreciate everything. Therefore divide your time according to your interest then find your way through the Egyptian Museum, New Wing (classical art), Etruscan Museum, Tapestry Gallery, Map Gallery, Borja Apartments etc. Some highlights include Greek statues, Renaissance paintings, an Egyptian mummy, an Etruscan chariot and early maps.

The Sistine Chapel, near the end of the tour, is the star of the Vatican Museum. The chapel is adorned with biblical scenes by Michelangelo, Botticelli and a number of lesser-known Renaissance artists. Michelangelo’s ceiling frescoes surpass everything except his “Last Judgement” behind the altar. As in the movie, the College of Cardinals meets for conclave inside the Sistine Chapel.

Most people are exhausted after completing the Vatican Museum. As such, you may wish to relax for the remainder of the day and start fresh tomorrow.

Day 2: Old Rome and the Excavations below St. Peter’s Basilica 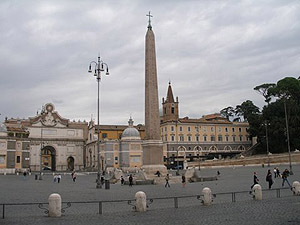 The mid-15th century Church of Santa Maria del Popolo is your next stop. Here Bernini’s white marble statue of “Habakkuk and the Angel” is found just outside the Chigi Chapel. Unfortunately it was covered for renovation at the time of my visit. Habakkuk was a minor prophet who predicted the destruction of the earth. The angel’s finger points in the direction of “the Path of Illumination – earth” in the movie. 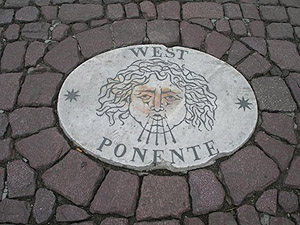 Look for the skeleton on the manhole-like cupermiento. This disc hides the entrance to the demon’s hole (crypt) in the movie. Langdon found the body of first cardinal in the crypt.

History records that this church was constructed atop the Mausoleum of the Domizii where the infamous Roman Emperor Nero was entombed. Is the cupermiento a hidden entrance to such a mausoleum? No one was available to answer this question.

Return to St. Peter’s and visit the excavations (Scavi in Italian). You pass through what was once an outdoor cemetery lost for almost 1700 years. The Roman Emperor Constantine had the summit of Vatican Hill levelled in order to construct the first St. Peter’s. Rather than removing rock and dirt, a retaining wall was erected and soil was added as filler. Thus ancient pagan and Christian tombs were buried under tons of earth plus the basilica itself. This necropolis remained undisturbed until the early 1940s when the site was excavated by order of Pope Pius XII. 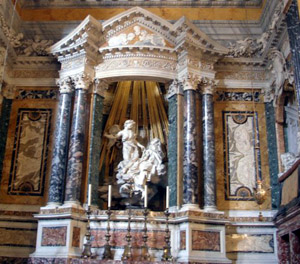 During the tour, your guide will point out St. Peter’s 2nd century funerary monument where his bones are clearly visible. In the movie, the canister of antimatter was situated nearby.

The necropolis tour concludes at the Papal Crypt. Here you find yourself surrounded by the sarcophagi of many but not all of the Popes. Among these tombs is that of Pope John Paul II. The marble floor on which you stand was once the nave of Constantine’s basilica. In the movie, Vetra and the Camerlengo violate the sarcophagus of the recently deceased Pope Celestine V and confirm that he was poisoned.

After the Papal Crypt, proceed to the far end of St. Peter’s Square opposite the basilica. Exit where the two colonnades converge and walk approximately five blocks to Castel Sant’Angelo. The statue of an angel adorns the roof of this fortified cylindrical structure.

Before entering, locate the aqueduct-like Il Passetto de Borgo. The corridor inside was the Pope’s secret escape route from the Vatican to Castel Sant’Angelo in times of trouble. While Langdon and Vetra found their way inside, you will not be so lucky. The passage is closed to the public. 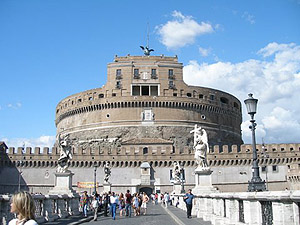 Castel Sant’Angelo, the last existing church of the Illuminati in the movie, was originally constructed as a mausoleum for the Roman Emperor Hadrian. Centuries later it was converted to a Papal sanctuary. The originally furnished apartments may be visited.

Papal Castel Sant’Angelo also served as a prison. In the movie, the assassin held the four cardinals within its cells.

As you exit Castel Sant’Angelo, cross the Tiber River using the nearby Ponte Sant’Angelo and walk to the Piazza Navona. The piazza features Bernini’s “Fountain of the Four Rivers”. This fountain is an allegorical representation of the four known continents in the 17th century – the Ganges (Asia), the Danube (Europe), the Rio de la Plata (the Americas) and the Nile (Africa). An Egyptian obelisk is incorporated into the fountain. A dove at the pinnacle faces “the Pathway of Illumination – water”. This dove represents the Angel of Peace in the movie. Langdon rescued the fourth cardinal (Baggio) from this fountain. 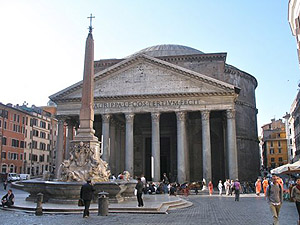 Your final stop is the nearby Pantheon. This Roman temple, now the Basilica of Santa Maria dei Martiri, remained almost unaltered from ancient times. The only exception was the removal of a bronze frieze by order of Pope Urban VIII. The bronze was used to cast the baldachin in St. Peter’s and the cannons at Castel Sant’Angelo.

Inside Langdon and Vetra searched for Raphael’s tomb. “The Madonna of the Stone” marks the artist’s grave which is located at 10 o’clock when you enter the rotunda. The oculus in the roof is your only source of light inside the Pantheon. Langdon mistook the oculus for the demon’s hole.

The “do-it-yourself” Angels and Demons Tour concludes when you leave the Pantheon. The nearest subway station is approximately eight blocks away (Metro Line A – Barberini Station). From there you can travel to other tourist attractions not related to the movie.

Hire a Guide for Angels and Demons Rome Tour: 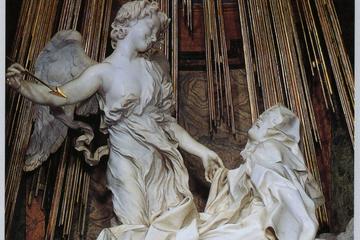 If You Do It Yourself:

You will enjoy your tour along “the Path of Illumination” more if you review the movie and then mark each site on a map of Rome and a schematic map of the subway system for your later use.

Dress conservatively when you visit any of the holy sites above. Men should wear long pants. Women should wear garments that cover the shoulders and extend below the knees. Vatican staff strictly enforces these clothing requirements.

Reserve your tickets to the Vatican Museum at least three months in advance at www.rome-museum.com.

Vatican City is five blocks from Ottaviano Station (Metro Line A). The best time to tour St. Peter’s Basilica is 7 a.m. when few people are around. The best day to visit is Monday when most other tourist destinations in Rome are closed.

Keep your Vatican Museum ticket as it also admits you to the Lateran Palace at the Basilica of St. John Lateran (Metro Line A – San Giovanni Station). The ticket is valid for five days. The Lateran Palace is open most weekday mornings.

Reserve your tickets to the excavations (Scavi) below St. Peter’s Basilica three months in advance at http://www.scavi.va/content/scavi/en/ufficio-scavi.html

If you are unable to obtain tickets to the Scavi, you can still enjoy a virtual tour at http://www.vatican.va.

Entry into the Papal Crypt is free and not part of the Scavi Tour.

The Church of Santa Maria del Popolo is near Flaminio Station (Metro Line A). It is also likely to be closed for several hours each day.

If your visit to Rome is three days or more, consider purchasing the Roma Pass www.romapass.it. This three-day pass provides you with free admission to the first two sites and then discounted admissions to other sites. Castel Sant’Angelo is included among the list of sites along with the Roman Forum/Colosseum (Metro Line B – Colosseo Station). Combine these two sites with three days of unlimited subway/bus travel and the pass pays for itself.

About the author:
Troy Herrick, a freelance travel writer, has traveled extensively in North America, the Caribbean, Europe and parts of South America. His articles have appeared in Live Life Travel, International Living, Offbeat Travel and Travels Thru History Magazines. He also penned the travel planning e-book entitled ”Turn Your Dream Vacation into Reality: A Game Plan for Seeing the World the Way You Want to See It”, available at www.thebudgettravelstore.com and based on his own travel experiences over the years. Plan your vacation at his Budget Travel Store and his PlanADreamTrip.com sites.

Photo credits:
First Castel Sant’Angelo photo by neufal54 from Pixabay
All other photos are by Diane Gagnon.