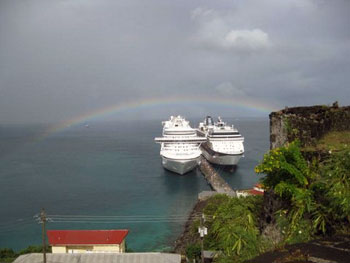 Grenada was one of the ports of call during a cruise our cruise ship made in 1978 shortly before the 1979 communist revolution. The ship was only in port for a short time period so I didn’t have a chance to really see and explore the island, but recently I was lucky enough to return.

Grenada is known as the “Island of Spice” and produces 1/3 of the world’s nutmeg. Other spices include cloves, cinnamon, mace, ginger, bay leaves, and turmeric. Grenada is one of the world’s largest exporters in the production of nutmeg and mace crops. I remember how the friendly natives would approach us and followed us into the water to get us to buy spices. 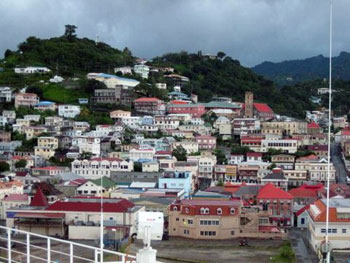 The State of Grenada is comprised of three main islands, Grenada, Carriacou, and Petit Martinique. Grenada offers friendly people, 45 white sand beaches and some of the most crystal clear water in the Caribbean. Its size is 344 square kilometers (133 sq mi), with an estimated population of 110,000. Its capital St. George’s is situated in a horseshoe shaped harbor and overlooking the capital on Richmond Hill is Fort Frederick which commands a panoramic view of St. Georges.

Grenada has had a turbulent history since achieving independence from Britain on February 7, 1974. On March 13, 1979 the Marxist New Jewel Movement led by Maurice Bishop seized power in a coup from Sir Eric Gairy while he was out of the country addressing the United Nations. In 1983 a dispute developed between Prime Minister Bishop and certain high-ranking members of the rebels which deemed Bishop insufficiently revolutionary. On October 19, 1983, Bernard Coard and his wife Phyllis and the Grenadian Army, led a coup against the government of Maurice Bishop, who was arrested. Street demonstrations followed in various parts of the island. Bishop had massive support among the population and was eventually freed by a large demonstration in the capital. Bishop attempted to resume power, but was captured and executed by soldiers along with seven others, including government cabinet ministers. The Coard regime then put the island under martial law. 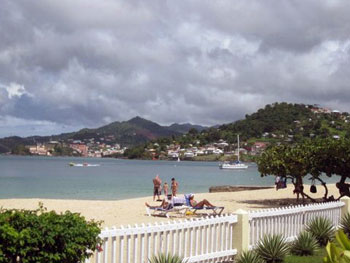 The overthrow of a moderate government by a strongly pro-communist one worried U.S. President Ronald Reagan. Cuban construction workers and military personnel were building a 10,000 foot airstrip on Grenada. President Reagan was concerned that the reinforced runway was for the use of heavy military transport planes and that it would be used by Cuba under the direction of the Soviet Union as a refueling stepping stone for Cuban and Soviet airplanes loaded with weapons destined for Central American communist insurgents. On October 25, 1983 Grenada was invaded by combined forces from the United States, Jamaica and other neighboring countries in Operation Urgent Fury.

After the invasion of the island nation, the pre-revolutionary Grenadian constitution was resumed and a parliamentary democracy was established. Eighteen members of the pro communist regime were arrested on charges related to the murder of Maurice Bishop and seven others. The eighteen included the top political leadership of Grenada at the time of the execution as well as the entire military chain of command directly responsible for the operation that led to the executions. Fourteen were sentenced to death, one was found not guilty and three were sentenced to forty-five years in prison. The death sentences were eventually commuted to terms of imprisonment. Those in prison have become known as the Grenada 17. Tour of Grenada 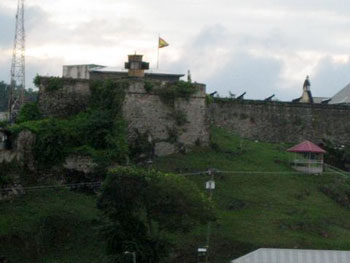 High on a hill guarding the entrance to the harbor is Fort George. Built in 1705 it has dozens of 300 year-old cannons, tunnels, and passageways to explore and offers spectacular views of the city’s picturesque harbor. On this recent visit, we toured the island and dodged rain drops as our native guide explained how Fort George was the center of the island’s October 19, 1983 political disturbance where Maurice Bishop and part of his cabinet was executed by a faction of the People’s Revolutionary Government. He points out the plaque on the inside wall of the fort erected on October 19, 1993 with the cooperation of the Government of Grenada by the Maurice Bishop and martyrs foundation. The fort is open for sightseeing.

The guide explains that the hurricanes in 2004/2005 destroyed 80% of the buildings in Grenada. Grenada has since recovered with remarkable speed due to world wide financing and support. The buildings have been rebuilt and the capital of Saint Georges does not resemble the past as I remember it. Its harbor is surrounded by the red tiled roofs of homes, shops and buildings of every pastel color of the rainbow. On the waterfront is the Esplanade Mall and next to it is the Welcome to Grenada Center. 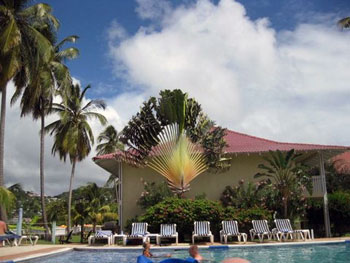 Due to the worldwide recession the status of the economy is weak and there is about 30% unemployment. The agricultural industry and in particular the nutmeg industry suffered serious losses because of hurricanes Ivan and Emily that followed in 2005. However as the new nutmeg trees planted gradually mature, there is hope that the industry will return to its pre-hurricane level as a major supplier in the Western world.

Below the fort the part of town called the Esplanade is a bustling, noisy hub of Grenadian commerce, Market Square. The best time to visit is on Saturday when the country folk bring their produce and wares to sell and the air is filled with the delicious scents of spices.

Grenada still has its innocence and lack of crowds. Tourism drives the economic growth of the island. It is still a great place to visit and enjoy what the island has to offer before the secret is finally out. I find that I have become enamored of the island and this part of the Caribbean. 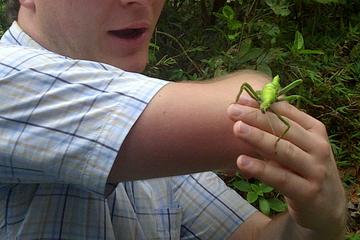 Many airlines like American Airlines, Air Canada, and British Airways offer flights into Grenada’s Maurice Bishop (Point Salines) International Airport from London, New York, Miami, Toronto, and Montreal. It is about a four hour flight from North America and 9 hours from the United Kingdom. Roundtrip fares average approximately $1046.00 and up from the United States and $1008.00 and up from Canada.

Grenada can be visited year around as the average temperatures is around 23C/80F. January to May is the dry season, although from June to December the rainy season, it supposedly rarely rains for more than an hour at a time and usually not every day.

During Grenada’s “high” tourist season, November to May, rooms are harder to come by and expensive. But during the “low” season, June to October, hotel rates drop by as much as 20% – 30% allowing a wider selection of accommodations.

Grenada Grand Beach Resort is very nice and immaculately landscaped although it is somewhat pricey especially including airfare. It lies on the opposite end of the bay and has 1200 ft of beachfront right on the sugar white sands of Grand Anse Beach, a smooth expanse stretching for two miles around the curve of a gentle bay, is world famous. It is centrally located in Grand Anse among the shopping, financial and restaurant district just 7 minutes drive from both the airport and the picturesque capital of St. George’s. There are other excellent accommodations ranging from luxury hotels, family style hotels, apartment, villas, and guesthouses.

There are a variety of restaurants within various price ranges and styles of cooking ranging from International, Creole, Seafood, Italian, Caribbean, and French cuisines. Try Fish Friday in the fishing town of Gouyave for a variety of local seafood cooked by vendors over open fires.

Grenada Tourism Authority
Grenada Explorer  – general information about the island, accommodations, hotels, resorts, restaurants, and diving etc. It is a potpourri of information.

About the author:
Larry Zeletel is a freelance travel writer, an avid, dedicated traveler. He writes about the various people and places that he has met and have visited during his travels.

All photos are by Larry Zeletel.