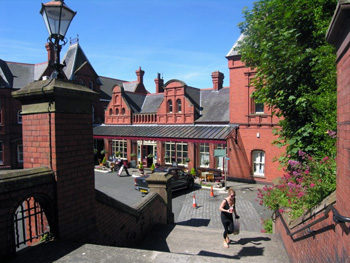 The vast sprawling smile of Douglas Harbour is for many their first view of the Isle of Man by sea. Since 1830 the Isle of Man Steam Packet Company has been plying the waters of the Irish Sea bringing tourists and more from the shores of the United Kingdom and Ireland; the oldest continuously operating passenger service in the world.

The vestiges of the heady days of tourism, when the Isle of Man was the poor man’s alternative for a Mediterranean holiday, line the face of the, almost two kilometres long, grande promenade. The tall clusters of Edwardian era apartments and hotels gaze upon the sea and the steady stream of people and traffic passing below them. All is punctuated at the south end by the imposing mast of the Steam Packet Ferry Terminal and to the north by southern terminal for the Isle of Man Electric Railway ready to whisk travellers off, through adjacent Onchan, to distant Ramsay and the crown of Mt. Snaefell (Snow Mountain). Connecting both is the horse drawn tram with its steady, methodical plod a relaxing retreat from the buzz of hurried traffic. Born in 1876 the 1.6 kilometre ride is the only commercial horse tram service still in existence. 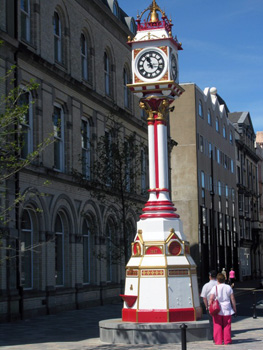 The remainder of the city sprawls away behind and up the hills though nowhere is terribly far from the spread of farmland, coast and the wild. Sheep can be spotted grazing upon the hills to the south overlooking the old narrow port of Douglas, at the mouth of the Douglas River, hemmed in by solid rock breakwater walls. Low tide levels are readily earmarked on the sides of the piers where craft lay drunkenly upon the mud flats waiting for the inflow to sober them up.

The beginnings of Douglas are lost in pre-history but it came most to the fore in 1869 when the capital of the Isle of Man was moved here from Castletown to the south and the House of Keys (legislature) set up shop. It has since grown to be the biggest community on the island (numbering 29,000) and the hub of a vibrant off-shore banking economy which has lent it more fundamental impact than the perhaps better known symbols of the tailless Manx cat, four horned Loghtan sheep or the risk-heavy TT races. Though the banks must now share their spot with the new kid on the block – computer gaming – they shows no signs of failing yet. 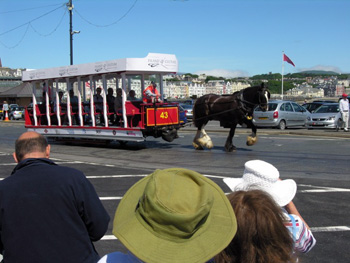 Despite its relegation to third place tourism and its legacy are far from relics.

High above the bay, guarding a green sward below a crowning old hotel, rests the Camera Obscura; a Victorian age hightech enclosed viewing station which reveals the bay below via a remarkable alignment of mirrors. First built in 1887 the initial camera fell prey to fire only to be rebuilt in the early 1890’s. For two pounds, which goes to the maintenance of the aging edifice, you can marvel at images of the bay emerging from the dark belly of the light-starved interior. It proves a healthy clamber from the streets below but there are buses. 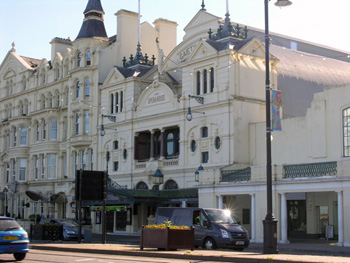 Minutely visible in the mirrors is the Edwardian Era Gaiety Theatre; a proud heritage building facing on to the main promenade with the ornate exterior a valid promise of what awaits inside. Opening in 1900, a year short of Queen Victoria’s passing, its rich upholstered seating with upper balconies, side theatre boxes and the expressive faces of cherubs and their statuesque kin holds silent witness to the many scenes on and off stage that have transpired over its many years. We were favoured there with a rousing rendition of Little Shop of Horrors so well presented I was surprised to discover the cast were not professionals. The sense of timelessness about watching a performance in this heritage theatre, where my ancestors had most likely sat as well, was as personal as it was poignant.

Before the Gaiety stretches the elaborate length of the promenade with its sunken gardens, kiosks pandering to tastes, public services and broad allowance for cyclists and strollers. Built in 1875 it gathers around the great smiling bay looming under the gaze of Douglas’s heritage face and to the waters where the enigmatic Tower of Refuge sits islanded and prominent. It was constructed in 1832 as a decorative life saving haven by Sir William Hillary of the Royal Lifeboat Institution fame after the witnessed tragedy of men lost at sea within sight of land.

Viewing all from the comfort of the horse drawn tram plodding slowly the busied road running aside lends the opportunity for unhurried appreciation of the gifts of nature and the craft of man. 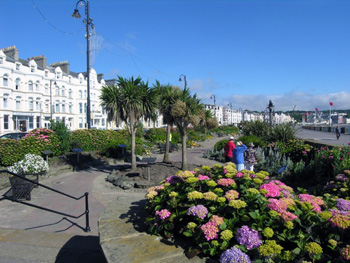 On the hills above is the must see Heritage of Man National Museum. Housed in its historic quarters, faced with ornate Celtic artistic adornments, its doors open to a chronological history which comes alive in dioramas, authentic artifacts, interactive displays which encapsulates the national story of the Isle of Man and its long history from prehistory to modern. Step into a sod roofed Celtic great house to hear a grandfather passing on to an enthralled child, a cozy home with common conversation between a Manx wife and Norse husband and displays enlivening images of the heady days of Edwardian era tourism. Gawk, amazed, under the expansive skeleton of a great deer which once roamed the isle.There are the makings of a long afternoon walking these halls.

Then there are the long stretches of pedestrianized strands loaded with shops, restaurants and services melding heritage buildings with modern commerce.

Here, centred around the promenade, is more than a day’s faring without need to employ transportation other than your own feet. When of desire you wish more grab a double decker bus to tour the streets of Douglas or venture elsewhere to the many experiences the Isle of Man has awaiting you. Douglas is central to an extensive transportation system which opens up the Isle’s wealth of things to see and do. Just getting there, be it by modern bus or historic train or tram is half the experience. Without a doubt, Douglas is a diamond within the crown which is Ellan Vanin, The Isle of Man.

Numerous flights service the Isle from Great Britain and Europe the most prominent being Easy Jet. All flights land at Ronaldsway Airport, a short drive or bus trip from Douglas. Arriving by ferry is an experience all its own (check Isle of Man Steam Packet Company). Island travel by train, tram and bus is highly recommended. The 1874 period train runs north from Port Erin to Douglas and the Manx Electric tram (1890s) north to Ramsay and Mt. Snaefell with the Douglas Promenade horse tram in between.
♦ Check Isle of Man Transport
♦ Check Visit Isle of Man

About the author:
Since 1994 Glen Cowley has parlayed his interest in sports, travel and history into both books and articles. The author of two books on hockey and over fifty published articles including sports, biographies and travel. He continues to explore perspectives in time and place wherever his travels take him. From the varied landscapes of British Columbia to Eastern Canada and the USA, the British Isles, Germany, Switzerland, the Netherlands, Greece and France he has found ample fodder for features.