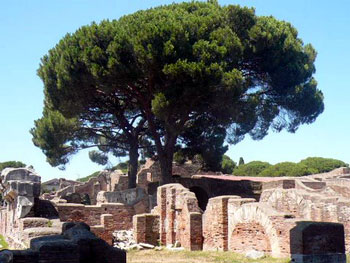 In the early sixties, I had explored Pompeii. Now, over 40 years later, my husband and I set out to investigate Ostia Antica, the “other Pompeii.” After arriving at the Ostia Metro station, we strolled the few blocks to the entrance. Ahead of us lay the mile-long Decumanus Maximus, the main drag of its day. From here we embarked upon travel, not just through a collection of 1st century artifacts, but what had been a real town.

The Decumanus is paved with dinner-plate sized stones enabling the rainwater to drain off and the Romans’ sandaled feet would stay dry. As we walked, we realized that our feet were stepping into the same ruts left by carrucas, the four-wheeled carts and cisia, the two- wheeled public transportation of the day.

From the site there are no modern houses, roads or telephone wires visible. It gave us the feeling of really being, one with antiquity. The only sound was the breeze coming through the fluffy tops of the Roman pines. 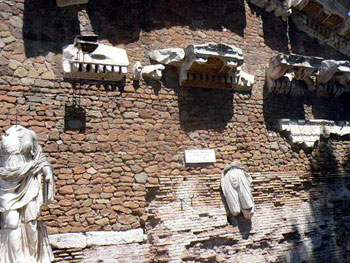 The Italian government has done a great job instructing visitors with strategically placed information about the site. We also liked the fact that they give you the freedom to discover Ostia on your own. Signs warn visitors to have respect for the artifacts. Because of atmospheric exposure and those created by the nearby airport, some of the monuments are wearing down. We wandered off the Decumanus, and. onto narrow paths scattered with pine needles, ducking under archways, and poking around alleys.

The early Romans believed that the dead should be buried outside the city to avoid contamination. After seeing the stone sarcophagi, it’s hard to believe that any infection could penetrate the covering. Not only did they house the dead, but the sculpturing on the outside were works of art. Some of these early citizens preferred cremation, a common method of the day. Niches in the walls can still be seen where the urns were deposited.

We found a series of warehouses located near the entrance, just past the sarcophagi. Ostia was once a port, and grain was an important commodity. Letters can be seen chiseled on stone tablets – sort of first century billboards. 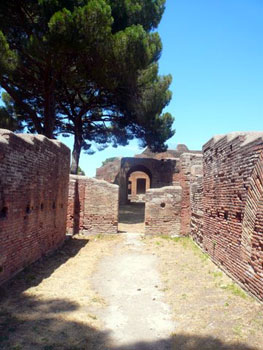 Just beyond the warehouses we climbed the few steps on our right. Here were the Baths of Neptune, a gathering place for the locals. An amazingly preserved mosaic, measuring 55 feet by 36 feet, is of the sea god riding a chariot drawn by four pawing horses.

The elite lived in one-story homes; all the rooms led into a central courtyard. Hot running water, which also fed the baths, was channeled through lead pipes in the wall.

The less wealthy lived in multi-storied (up to five floors) dwellings. Woe to the penthouse dweller climbing all those stone steps. Many of these are still in tact. Apartment buildings still show the second floor balconies. The arched doorways on the ground floor led to shops, many of which are still there.

For an excellent taste of what life was like, my favorite was, the Insula of the Thermopolium (name means ‘Sale of hot drinks’) This was the local tavern where the workers of the day shot back a few swigs of the local brew. What is amazing is the almost perfect condition of the shelves: earthenware jugs, not glass bottles were used here. There were even remnants of a sink and a few glimpses of a wall painting. 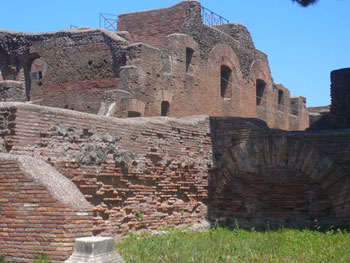 We pictured the locals sitting in baths, then walking down the Maximus to imbibe a few cups of wine at the Insula of the Thermopolium.

The Forum of the Corporations, which housed the offices of sixty-four maritime companies, was a sort of the Wall Street of its day. This was where you would come if you needed to ship something to Rome, be it wheat from Spain, sugar from India, or African beasts for the Coliseum games. To find the most suitable shipper, you would examine the mosaic names and icons in front of each establishment. The sign signifying the owner’s occupation was a floor mosaic. For example, an elephant announced a trader in exotic animals. Judging by the numbers of fish mosaics, the fish business was flourishing.

Towards the end of the Maximus, we got an idea of ancient Roman entertainment at the amphitheater. The three tiers of marble steps at the amphitheater’s base were the box seats of the day. Here the elite cheered their favorites. Behind them, the stone bleachers rose in a semi-circle. Erected in 12 BC, Ostia’s amphitheater is a wonderfully preserved series of semicircular stone bleachers. It once held 3500 spectators.

The tiny stage is still intact; now, this very same stage area gives 21st century performances. A series of theatrical masks, chiseled in stone, are still on view, right off the performance area.

Most ancient remains of Ostia date from the second half of the 4th century BC. Its original purpose was to serve as a naval base for Rome. By the 2nd century AD, it had become a flourishing commercial center inhabited by upwards of 100,000 people. But, like the Roman Empire, Ostia began its slow decline in the 3rd century AD. By the end of the 5th century AD, Ostia had seen its best days.

The first excavations were started in the late 1700s and work has continued ever since. A roped-off area of white tents showed us that restoration was in progress. An employee with a high power water gun was spraying a mosaic. She told us that 21st century pollution makes it very difficult to keep them clean. 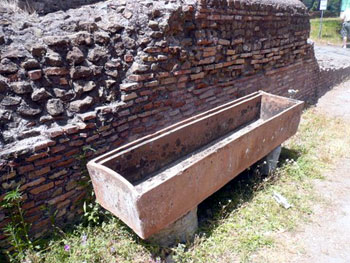 After navigating almost the length of the Maximus, we came to the Forum, the main square of the town. Here were the remains of important government and religious buildings. Many of the pillars and building foundations have been left standing. The huge Capitolium Temple dominates the right-hand side. Most Roman forums were dominated by a temple – to bring the deity to the people. The Capitolium Temple was dedicated to the pagan trinity of Juno, Jupiter and Minerva. Columns flank the massive staircase leading to the entrance. At least two stories are visible. Before heading back, we stopped at the near-by museum to view the busts and statues of the local citizenry. Most amazing is the detail to features, hair styles, and dress. My favorite was a soldier in a pleated kilt, headpiece, shoes, and weapon. There is also a room with more of the marble sarcophagi showing carvings of Dionysus, the Greek God of wine.

Then it was back to the Metro stop for the return to Rome. As the train was approaching, one last exhibit caught our eye: the monument containing the ashes of one, Flavio and his wife, 1st century AD.

The guidebook allotted two hours to see Ostia. We stopped at five; it was not nearly enough. 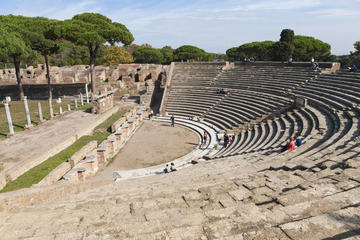 At Largo Argentina, take the number 30 bus and get off at Piramede. The Metro station is right across the street. Take the Metro to Ostia Antica. The entire ride takes about 45 minutes and costs €2 each way.

About the author:
Wynne Crombie has a master’s degree in adult education and has been published in Travelthruhistory, Christian Science Monitor, Catholic Digest, Cat Fancy, Boys’ Life, Real Travel (UK) Air Force Times and Stars and Stripes. Wynne met her husband in 1967 while both were with the US Air Force in Berlin. They have four grown daughters and two granddaughters. Wynne teaches ESL at a Chicago community college. She and her husband enjoy travelling.