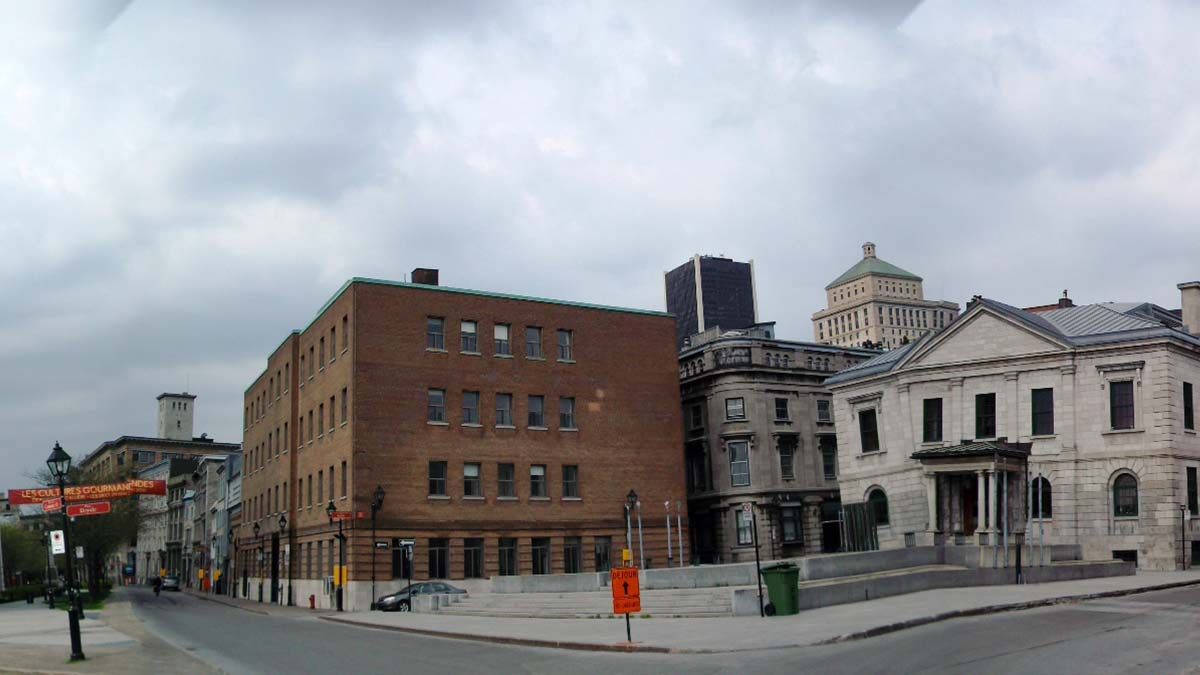 I descend slowly into the dimly lit archeological site in the Old Port of Montreal. 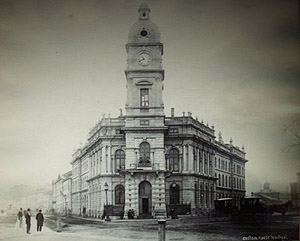 I am now below the ground level of the beautifully preserved Pointe-à-Callière Museum. As my eyes adjust to the light, the foundations of the formally standing Royal Insurance building (1861 – 1951) appear before me as an ancient maze. I take a few cautious turns around the smoothly polished walls of the labyrinth, making sure not to trip on the mosaic of large smooth stones.

In 1870 the Canadian government bought the building to be the new customs house in the rapidly expanding port city, leading me to imagine customs officials running around with great piles of paper, their shoes sliding on the floor as they scurried to tax the latest importers of goods.

I approach the heart of the foundations and in a depression below the ground floor level of the Royal Insurance building the remains of an old cemetery appear. I learn from the concise display that the cemetery played a highly significant role during the early drive to colonize North America. 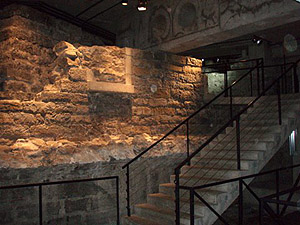 In 1642, Paul Chomedey de Maisonneuve, a Jesuit missionary from France, sailed upstream along the St Lawrence, the imposing river and principle artery in to the heart of eastern Canada, from Quebec City. Under the authority of the Notre-Dame Roman Catholic Society of Paris, De Maisonneuve was to doggedly upgrade a French fur trading post to the Ville-Marie colony dedicated to the Virgin Mary at Pointe-à-Callière*. The residents of Quebec City thought this was a “une folle entreprise” (a crazy undertaking) due to the site’s proximity to the Indigenous village of Hochelaga. The village, comprised of 50 wooden homes each housing an entire maternal chain, was surrounded by a circular wooden fortification. French explorers and traders, like Jacques Cartier and Antoine de Cadillac, the founder of Detroit, often needed to rest here as they portaged around the impassible Lachine rapids. To ensure their safety from Indigenous raids from the village it was strategically important to secure the area; this security eventually came from colonization. 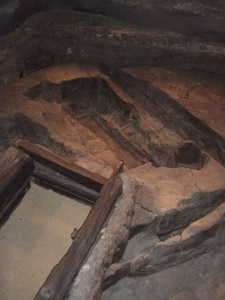 The first colonialists battled tenaciously but unprepared, due to their inexperience in cold climates, through their first few harsh winters. They warred with the indigenous people for control of land, trade routes and to convert them to Catholicism. Those who died were buried beside the settlement; placed in to one of two adjacent sections with different burial rites, one for the French and the other for catholic converted Natives.

Remarkably, this is the cemetery I am standing by; the first cemetery of Montreal, underneath the Royal Insurance building underneath the Pointe-à-Callière museum. I am literally at the point where the city started, or depending on your point of view, the first colonialist’s journey from France ended.

De Maisonneuve’s missionary voyage didn’t end in this cemetery however; in 1665 he was ordered by Alexandre de Prouville, a military leader of New France to return to Paris, where he lived a life of obscurity for 11 years until his death. He had firmly made his mark on the City; placing a large cross on top of Mont Royal in the center of the City. 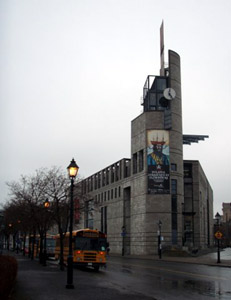 I respectfully circle the cemetery and reach the far end of the archeological site. The hidden crumbled remains of a brick store house come to my attention. A video demonstrates that over the course of its life a series of many haphazard stone-walled additions had been made to augment and segment the existing structure. They have been dated to a time when Montreal was under control of Great Britain, following the Seven Years War in Europe when Quebec was ceded to Great Britain in the 1763 Treaty of Paris. Here supplies for the rapidly growing North American colony would be stored as they were unloaded from ships which had docked in the Port.

Later the Royal insurance building was built as Montreal became an important and financially powerful city. In 1951 it was brought down to make way for a parking lot, under which in 1989 these wonderful treasures and hints to the city’s past were found.

I take the steps back above ground and emerge from a wonderful flashback to early Montreal.

The Pointe-à-Callière museum is one of the few museums which have truly inspired me. I came away wanting to learn everything about the founding of Montreal and the European colonization of North America.

*Named after Louis-Hector de Callière, Governor of Montreal and New France around the turn of the 18th century. 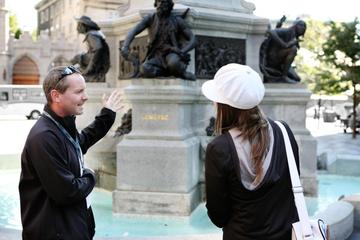 The Pointe-à-Callière is found in the Old Port (“Vieux Porte”) of Montreal. It has 2 principle sections: the archeological sites underneath the old Royal Insurance building and also underneath Place Royal, Montréal’s oldest Marketplace, each connected via an underground tunnel which traverses the old Little St-Pierre Sewer. Opening information, admission prices and all other information is best found via the website www.pacmusee.qc.ca

About the author:
A travel bug dragged Martyn Bryant to Montreal from England via Vancouver, where he was working as a particle physicist. He writes travel stories, folk songs and draws charcoal portraits.
martynstravels.blogspot.com
martynsart.blogspot.com