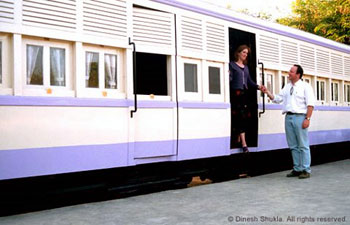 I have always been a regular at the annual Navaratri Festival that is celebrated with great pomp and grandeur at the Bhawanipore neighborhood of Kolkata which is where most of the affluent Gujarati community of Kolkata live. Last year was particularly an eventful one for me and my family as we had an opportunity to dine with the present Maharaja of Gondal – His Excellency Jyotendrasinhji Vikramsinhji Sahib.

Having introduced myself as a travel writer, I inquired about the state of affairs of the royal palaces of Gondal. The Maharaja was indeed very eloquent in his praise of the royal palaces, which even now has been able to preserve the Old World charm and the royal ambience of yesteryear.

According to the Maharaja Jyotendrasinhji – “Gondal may be a quaint little town of Gujarat and most tourists to Gujarat may not even be aware of its existence, but once they set foot on this charming town and savor the famed Gondal hospitality, a majority of the visitors and guests turn out to be repeat visitors who develop some sort of a love affair with the palaces of Gondal. Of course, they may not be as opulent as the palaces of Rajasthan, there is no mistaking the fact that in terms of traditional Gujarati royal ambience, Gondal offers the most authentic royal treatment to each of its discerning guests.” 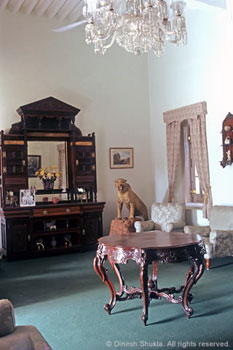 Midway through the dinner, the Maharaja extended his royal invitation to me and my family to be honored guests of his palace. I was absolutely delighted with the offer. A fortnight after the Navaratri festivities, I booked a flight to Ahmedabad and travelled onwards to Gondal by road. By the time we reached Gondal’s magnificent Orchard Palace, it was late evening and dusk had already descended here. I was informed by the palace’s caretaker that the Maharaja was out of town and would be back in a day’s time.

This was my first brush with Gujarat’s royalty. Although I had earlier visited smaller palaces in places like Jaisalmer and Jodhpur in the desert state of Rajasthan, they were not quite of the same magnitude as the one in Gondal.

It would perhaps be apt to delve back into Gondal’s rich historical past with particular reference to Maharaja Bhagvatsingh Sahib who ruled Gondal from 1888 to 1944 and it was during this period that Gondal rose to the peak of its prosperity.

Maharaja Bhagvatsingh Sahib was a progressive free thinking ruler and to his credit, he held a Medical degree. Having received much of his education in England, the Maharaja was exposed to the latest scientific developments in Europe and upon his return to India and his subsequent coronation as the Maharaja of Gondal, he took extensive reform works to uplift the standard of life of the ordinary people of Gondal and its peripheral areas. Be it administration, education, means of transportation and other aspects of urban town planning, the Maharaja showed his prowess in all the spheres of development. 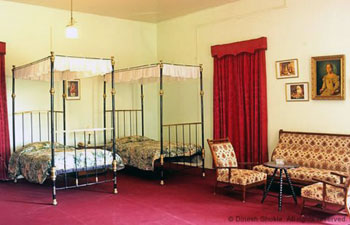 During his rule, the residents of Gondal were exempt from paying taxes as he evolved an innovative land revenue system. To make Gondal self-sufficient in livestock, he introduced animal husbandry while to improve the agricultural sector, extensive irrigation network was developed, which brought even the wastelands surrounding Gondal under the ambit of modern agriculture. The Maharaja’s visionary outlook ensured that even those with very little academic background too were also offered meaningful employment with the setting up of technical schools that imparted training on domains like carpentry, mechanics, surveyors, painters and engineers.

Within four years of his accession, the British East India Company bestowed the status of a “First Class State” to Gondal with the corresponding 11 gun salute, which was one of the most prestigious political honor during the British era. The moment of glory for the Maharaja however came in the year 1887 when the British government conferred him with the status of knighthood and he was addressed as Sir Bhagavatsingh from then onward.

I took a leisurely walk through the sprawling royal estate accompanied with my knowledgable guide who showed me all the major attractions of the palace. The royal family still lives in one exclusive wing of the estate, popularly referred to as the Huzoor Palace. From the regal splendors of the Huzoor Palace, we moved on to the surrounding Orchard garden and the immaculately maintained lawns. After a stimulating cup of tea and crisp biscuits, I was shown the splendid “Room of Miniatures”. The regal drawing room was conspicuous by some high quality miniature paintings, brass works as well as antique furniture. 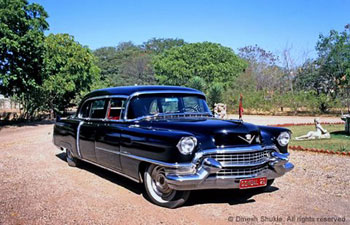 However, the best was yet to come viz-a-viz the Royal Garages about which I had heard so much from my Gujarati friends at Kolkata. As I was ushered in to the garage compound by my guide, I was downright stupefied by the huge collection of vintage cars which were stationed in individual sheds. This was easily one of the greatest collection of vintage cars in the whole of Asia. The collection ranged from the 1910 New Engine to the more elegant 1940-50s Cadillacs as well as a few truly impressive American cars of the 50s. The best part of the Royal Garages was the remarkable collection of horse drawn carriages, which was inclusive of the Victorian and Shetland carriages.

In spite of all the wear and tear as also the age of the cars, most of them were in pretty good condition and a majority of them are still drivable. So fascinating is the vintage car collection that even the big time Bollywood Directors come calling at the Orchard Palace with special requests to Maharaja Jyotendrasinhji to make available his vintage cars for exclusive exposure in popular Bollywood blockbusters.

In contrast, the Naulakha Palace dates back all the way to the 17th century and is perhaps the oldest palace in the whole of Gondal. The intricately designed stone carvings reflect a high degree of craftsmanship and the stunning “Jharokas”, the artistically designed carved arches and the unique one-of-its-kind coiled up stairway would mesmerize even the most jaded of visitors. Of special significance is the regal Durbar Hall, which is conspicuous by its sparkling chandeliers, antique wooden furniture and mirror works. 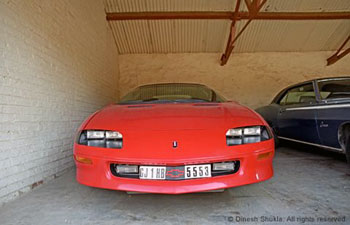 No visit to the Naulakha Palace is ever complete without a visit to the exclusive Palace museum which showcases the rare collection of silver caskets which I was told were used to carry messages and gifts for the erstwhile Maharaja of Gondal.

Going around the marketplace, I discovered Gondal’s small town charms. A vast majority of the town’s population engage themselves in small scale crafts business like jewelery and trading in timber. The town has two principal markets – the Nani Bazar and Moti Bazar. I found both the markets buzzing with trading activities. My guide escorted me to the Nani market and introduced me to one of Gondal’s prized possession – the Red Chilly for which Gondal is world famous. Apart from Red Chilly, Gondal is renowned for its Ground Nut Oil and I was told that as many as 400-500 oil mills are located in close proximity to Gondal. I bought a one-litre packet for my family as per the advise of my local guide.

Apart from royalty, Gondal is renowned for its indigenous Ayurvedic clinic – the famed Bhuvaneshwari Ayurvedic Pharmacy, which even today manufactures the age-old traditional herbal medicines. Inside the premises one will come across the Bhuvaneshwari Stud Farm, which has some of the best specimens of the famed Kathiawadi horses.

The Kathiawadi horses, it may be recalled has played a significant role in the history of ancient and medieval India. There was a stage when these rare breed of horses were close to extinction, which necessitated the setting up of an exclusive Horse Stud and through the visionary approach of Acahrayashri Ghanashyamji, this renowned horse stud – the Bhuvenaswari Horse Stud was launched. The Bhuvenaswari horse stud regularly participates in all the important equestrian events held in India and this one-of-its-kind horse stud has a membership base of approximately 2000 members who take active part in the running of the horse stud.

The British may have left long back but there is still a whiff of Britain at Gondal, courtesy the Sangram Sinhji High School, which has been built in the traditional Eton style of architecture. We visited the school during the afternoon recess and went around the immaculately maintained school and marveled at the predominantly Gothic architectural features of the school’s façade. The school has carefully preserved a majority of the laboratory equipment dating back to the colonial British era. The floors made of the finest specimen of Italian marble and the high wooden ceilings offered a truly colonial English ambience.

Gondal is easily accessible by air, rail and road networks. The nearest airport is located at Rajkot which is a mere 40 km away from Gondal and there are regular flights to Rajkot from Mumbai, which is India’s principal aviation hub. By rail, the nearest railway station is also at Rajkot and falls under the Western Railway network. By road, Gondal is well connected with cities like Ahmedabad, Rajkot and Mumbai.

In terms of accommodation, the royal palaces like the Riverside Palace and the Orchard Palace are the best options. A variety of accommodation options ranging from double and single occupancy are available. Luxurious royal suites too are available for the discerning guests.

About the author:
Subhasish Chakraborty is a travel writer from India. He has been in this profession for the past decade and has traveled extensively all over India. He was associated with some of India’s leading newspapers as a travel columnist. He contributes his thought provoking articles on travel and tourism to many international travel magazines and offers consultancy services to government as well as private tourism organizations.

All photographs are by Dinesh Shukla.