by Karen B. Phillips

When you think about magnificent ancient Greek temples, the Parthenon, the Erechtheum, and the other structures on the Acropolis in Athens always come to mind. Perhaps less known to many, but very well-preserved and impressive in its own right, is the Temple of Aphaia, located on a hilltop in a pine grove on the northeast point of the Greek island of Aegina, in the Saronic Gulf. Aegina is approximately 19 miles (30 km) southwest of the Port of Piraeus near Athens. 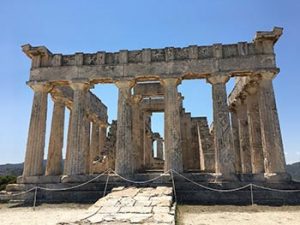 The Temple of Aphaia forms part of what has been called the “Sacred Triangle of Temples,” along with the Parthenon in Athens and the Temple of Poseidon at Sounion. The equilateral triangle formed by these three ancient temples also has been termed “Antiquity’s Perfect Triangle.”

The temple was dedicated to the goddess Aphaia, a mountain and hunting goddess who also protected shipping, which was important on Aegina given the significance of shipping to the island’s prosperity. There are variations of the legend about Aphaia, but all seem to agree that as she was attempting to escape from a man who had fallen in love with her (perhaps King Minos of Crete), she threw herself into the sea off the coast of Aegina.

Unfortunately, she became entangled in fishing nets and was hauled aboard a boat. When a sailor on the boat fell in love with her, she fled again, jumping overboard and swimming ashore on Aegina. As she made her way up the hill to the pine forests, she disappeared and was never seen again. The name Aphaia comes from the Greek word afandos, which means one who has vanished.

Aegina was a major sea power after the seventh century B.C. because of its strategic position and its commerce with other countries, such as Egypt and Phoenicia. The Temple of Aphaia, which is the only known site of worship of the goddess Aphaia, was constructed during this period of dominance. The current temple, erected around 500 B.C., was built over the remains of an earlier temple that had been destroyed by fire in 510 B.C. Experts believe there may be been an even earlier temple on the site, and figurines have also been found on the site from the 14th century B.C. from the Minoan civilization. 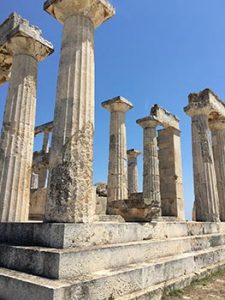 The temple was constructed of local grey limestone, and it was covered with stucco that was painted with pigments. The temple is in the Doric style of architecture, with six columns on the ends and 12 columns on the flanks resting on a roughly 50 by 100 foot (15.5 by 30.5 meter) platform; of the temple’s original 32 columns, 25 remain standing today. The temple’s 1:2 proportional relationship was different from other temples of this era, and the temple also incorporated some architectural refinements, with more slender columns that are spaced farther apart than typically seen in Doric temples.

The temple’s east and west pediments featured painted sculptures depicting scenes of battles fought by heroes from Aegina during the Trojan War. These were removed from the site in 1811 during the initial excavations of the temple. Purchased in 1813 by Prince Ludwig I of Bavaria, the pediment sculptures now are displayed in the Glyptothek Museum in Munich. Several smaller sculptures from the complex are exhibited on Aegina and at the National Archaeological Museum in Athens. 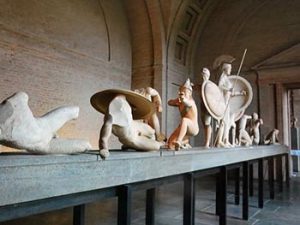 In ancient times, the Temple of Aphaia was situated in the center of a stone enclosure wall. In addition to the temple, the sanctuary complex included an altar and a series of buildings that served the needs of the temple, including the priests’ residence. On the northern side, a cistern collected rain water from the roof of the temple and near the cistern was a large column topped by a sphinx, which was believed to have been built around 600 B.C. Experts also believe that a wooden statue of Aphaia may have stood at a distance from the temple, but only its base remains today. 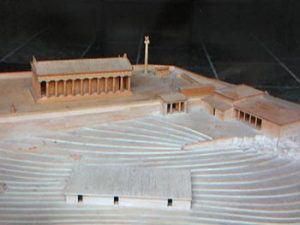 The importance of the temple declined rapidly from the middle of the fifth century B.C. as Athens became more dominant and Aegina’s power began to wane. Experts believe some repairs to the temple were made in the fourth century B.C., but by the end of the second century B.C., the area was abandoned.

On the sunny summer afternoon that I walked up a small hill beyond the entrance to the sanctuary complex to the Temple of Aphaia, I couldn’t help but feel as if I had stepped back in time. My husband and I had arrived at a fortuitous time: there were no tour groups at the site, so it was very quiet and the perfect opportunity to experience the majestic ruins and to contemplate how the sanctuary 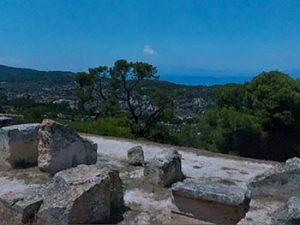 complex must have looked in ancient times. In fact, other than my husband and myself, we saw only one other tourist at the site, so we were free to explore the temple at our leisure and take in the beautiful vistas. The temple complex is located on a hill about 525 feet (160 meters) high, which provides magnificent views of the Saronic Gulf and the surrounding wooded hills. In fact, you can see the Acropolis across the water to the northeast from the Temple of Aphaia on a clear day.

The temple has remained visible and imposing for the many centuries after its abandonment. Artists, including the British painter J.M.W. Turner, have been inspired by the Temple of Aphaia to create beautiful works. The temple truly is an architectural wonder of ancient Greece and well worth a visit. Perhaps you, too, will find inspiration at this fascinating site!

Aegina is roughly 19 miles (30 km) from Athens and makes an excellent day trip, but if you have more time, there is plenty to do on the island for a few days. Boat service from the Port of Piraeus to Aegina Town is frequent; the ferries take about an hour for the journey, while the smaller hydrofoil boats take about 40 minutes. Buses and taxicabs to the Temple of Aphaia are available from the plaza outside the ferry dock in Aegina Town. The Temple is approximately 7 miles (12 km) from Aegina Town, and admission to the site is €6.

About the author:
After a professional career in the government and the corporate sector, Karen B. Phillips has turned her writing focus to travel and fiction and also is an avid photographer.

All photographs by Karen B. Phillips