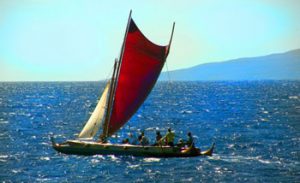 The wind off Maui’s northwestern coast picks up, creating short, choppy waves that slop over the sides of the traditional Hawaiian canoe and into our faces. But the tropical sea is blissfully warm. Though wet and wild, it is an exciting ride as Captain Timmy Gilliom shouts out orders to his crew of agile sailors and brings the boat about for a fast downwind run. I admire the canoe’s refined construction. Not a nail, bolt or other piece of metal is to be seen. The twin dugout hulls are connected by cross-pieces of rare koa wood. All the wood is so perfectly lashed together with rope that nothing squeaks or groans even under great stress. The outing gives our small group of visitors a tantalizing taste of what the early Polynesians experienced as they traversed vast distances in open boats.

Another day, Gilliom shows us the larger voyaging canoe that he and a small non-profit group are nearly finished building at a boat shed in Lahaina. It is crafted largely of modern materials, such as fibreglass and epoxy, and the sails are fastened on metal tracks. “You’ve got to go with the times,” says Gilliom, who has skippered the famous canoe Hokule’a on cruises as far as Easter Island that re-enact the ancient journeys of his ancestors. In the distance is unpopulated Kahoolawe, identified by scientists as the source of basalt for stone tools found on an atoll near far-away Tahiti. 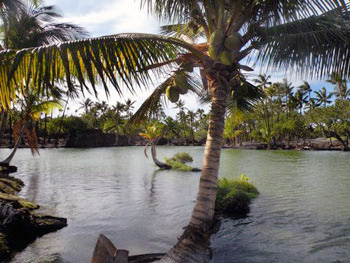 My wife Annie and I are immersing ourselves in the history and culture of Hawaii’s less crowded “outer” shores, far from the lights and traffic of Waikiki. It is like opening a Russian doll, so many hidden dimensions are revealed. We keep getting vivid glimpses of long-vanished ways of life. It is a rich, diverse and sometimes shocking tableau, full of extreme contrasts. On the one hand, there is the fondly imagined paradise of dramatic geography, a sultry climate and beautiful native people. On the other, a history of brutal warfare and the oppressive traditional social system, in which commoners might be killed for stepping on the king’s shadow. On the Big Island, however, people were safe if they reached sanctuary within the walls and temples of the City of Refuge, now painstakingly restored.

Centuries of ecological destruction and extinctions have left their mark. All the main edible plants—taro, yam and coconut, papaya, banana and citrus fruits—were introduced by the colonizing Polynesians. Primordial forests were slashed, burned and terraced for agriculture. Native birds were decimated by land clearing or by the rats that came as hitchhikers on the canoes. No Hawaiian landscape resembles what existed a thousand years ago. 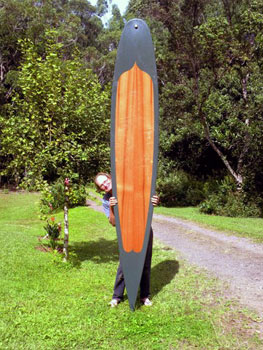 Also surprising is how rapidly Hawaii changed after Captain Cook arrived in 1778. By the 1820s, Lahaina was a bustling center for whalers and missionaries, with grog shops and churches, brothels and hotels. That was fully two decades before the Gold Rush led to the growth of San Francisco. In fact, Lahaina had America’s first high school west of the Mississippi. Since then, entire industries, such as pineapple cultivation, have come and gone, vanishing almost entirely. Great forests of koa and sandalwood were pillaged for export. Where fields of sugar cane flourished until quite recently, there are now virtual ghost towns and abandoned mills.

Even such iconic pastimes as surfing have undergone change. We begin our sojourn at the home of old friends, Charley and Lisa Erck, on the Big Island. A fine woodworker, Charley custom-builds a seldom-seen style of hollow surfboard designed by a famous 1930s surfer, Tom Blake. These are truly works of art, but Charley loves to show them off in real waves. They drive us down to the beach at spectacular Waipio Valley, fringed by thousand-foot cliffs and irrigated by Hawaii’s tallest waterfall. Waipio, once densely populated, was the early domain of a chief who eventually united the islands by force and became King Kamehameha. From a lookout above, we see tidy plots of taro, a mainstay in the old Hawaiian diet. A tsunami in 1946 destroyed most of the houses and cultivated lands, but a few dozen homesteaders gradually returned. While Charley surfs and Lisa swims, we kayak back a century in time, up the little river past funky homesteads and grazing wild horses. 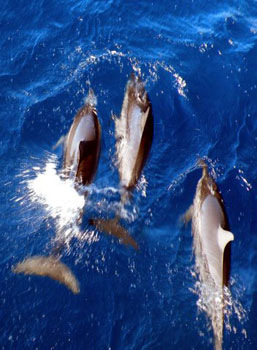 Then, we join a cruise that starts at the Big Island and ends on Maui. Carrying around 30 passengers, the Safari Explorer is a small but deluxe ship. At Mauna Lani resort, where our group assembles, we marvel at sophisticated ancient fish ponds that provided a fine and predictable catch for the chiefly elite. Nearby are mysterious petroglyphs etched with strange human and animal figures, and cave-like lava tubes, where people used to find shelter. One side trip takes us to a seaside heiau, a huge temple platform of black lava rocks built for Kamehameha. Its dedication required a human sacrifice, so his cousin (and rival) was slain. On the shore below was a separate temple, where victims were fed to the sharks.

Our ship is well-equipped for seeking out marine wildlife. We snorkel among brilliantly colored reef fishes and the graceful green sea turtles that have long been revered throughout Polynesia. Large pods of spinner, spotted and bottlenose dolphins surround us several times, weaving back and forth, twisting in the air, and cavorting in our bow wave. Humpback whales blow and leap halfway into the sky. One night, we float in wetsuits while powerful spotlights illuminate the depths. The lights attract dense plankton and the huge manta rays that feed on it. We watch, transfixed, as these gentle giants swoop by gracefully just below us, ghostly creatures with gaping mouths and wings fifteen feet across. 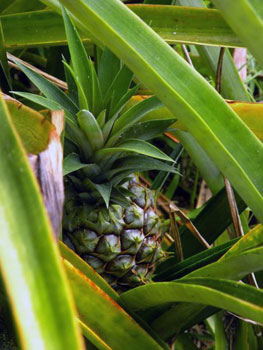 Other evenings, special guests come on board. A hula troupe gives a performance that is nothing like what tourists experience at most resorts and commercial luaus. The lead dancers are men. They do aggressive, warlike steps, much like the Maori haka in New Zealand, rather than gentle, flowing ones. The moves are accompanied by chanting and drumming. There is not a ukelele or guitar in sight. We join them in drinking awa, a mildly narcotic ceremonial potion known elsewhere in the Pacific as kava. Another night, we meet Lawrence Aki, a hulk of a man who exudes quiet dignity, and his young disciple Kawika. Lawrence is a kumu (teacher) from a remote valley on Molokai. Kawika has lived with him for five years, helping at first in the taro patch and learning the old ways. This includes speaking the Hawaiian language and reciting genealogies. “It’s a lifetime commitment,” Lawrence says.

We anchor and go ashore at sparsely populated Lanai, once the exclusive company realm of Dole fruit. A high plateau in the island’s center had pineapple fields stretching for miles. Today, it’s cheaper to grow them in the Philippines. We hike through an exotic tropical forest to a high lookout. The waters of the lush valley below once irrigated the pineapples. Big horned moufflon sheep graze on a hilltop. A gorgeous lodge with a world class golf course stands where workers at a cattle ranch used to live. In tiny Lanai City, contending lawn signs debate the economic benefits and environmental impacts of installing giant wind turbines to generate electricity for Honolulu.

On Maui, small buses take us up through cooler elevations and ranch land to the 10,023 foot summit of Haleakala for a blazing sunset. Legend says the volcano was created by the wandering fire goddess, Pele. Women used to place placentas atop the peak to ensure long and healthy lives for their children. Now it houses an array of telescopes, one so powerful it was used to inspect damaged tiles on the space shuttles. 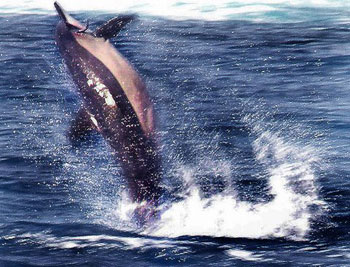 The final morning, a humpback leaps in the distance. It is a fitting sendoff. We have an entire afternoon to enjoy before a midnight flight home, and we have decided to visit a small museum about Pacific whaling. It features the old tools and equipment and the many products produced from an estimated 292,000 great cetaceans killed by the American fleet alone between 1825 and 1872. Fortunately, the humpbacks have made a remarkable recovery in recent years, from a low of around 1,000 in the 1960s to 20,000 or more today. On display outside is the impressive skeleton of a 40-foot sperm whale.

Our last evening in Lahaina, before facing airport security and other 21st century pleasures, we dine in a seaside restaurant, where the tiki torches are lit at dusk. We hang out in the quiet courtyard of the venerable wooden Pioneer Inn. And we stroll under a vast multi-trunked banyan tree, decorated with Christmas lights, that covers an entire city block. Growing for well over a century next to the old harborfront courthouse, it has been a silent witness to all the swirling tides of Hawaiian life.

For the Hawaiian winter cruises of Safari Explorer (or its summer cruises in Alaska), see World Luxury Cruises.  The 2012/2013 Hawaii cruises are scheduled to include a stop at Molokai.