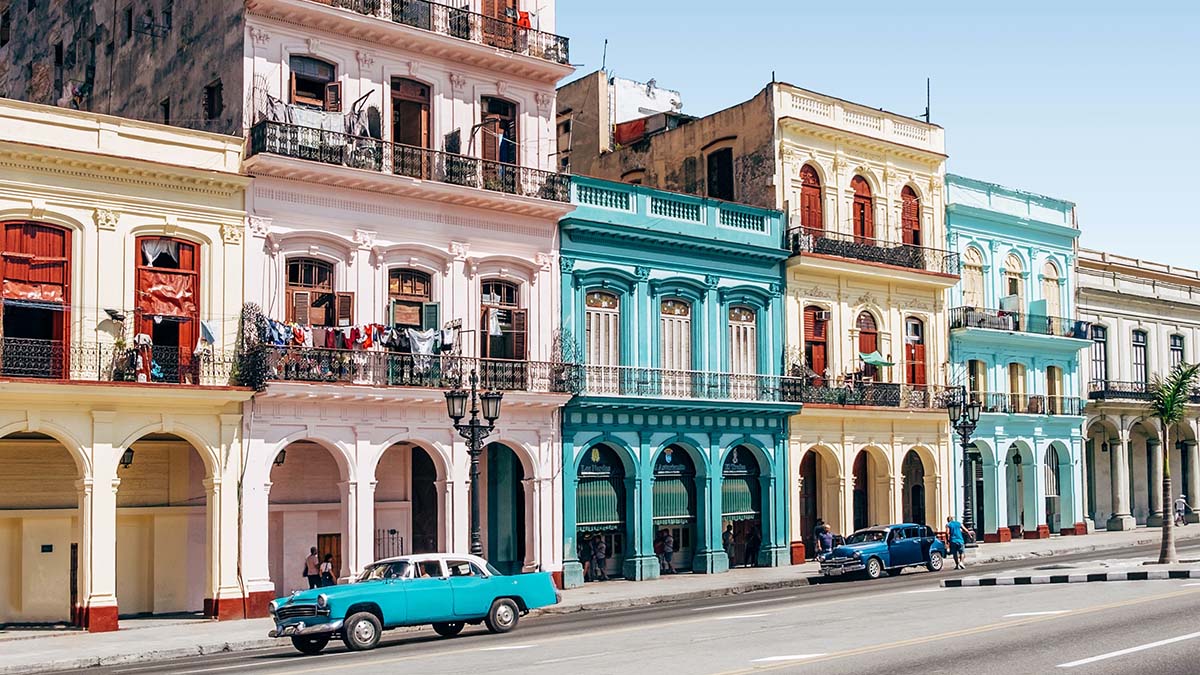 Before arriving in Havana on a warm January evening I thought modern day Cuba was held together as a country by socialism, with the deteriorating health of Fidel Castro threatening its identity and survival. By the time I left Havana three days later I realised that modern Cuba is as much about history and its long fight for independence as it is about the current government and its policies. 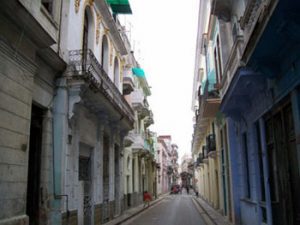 The island looked mysterious as we flew in, with yellows and browns merging on the ground, while greens, blues and greys swirled together in the sky as the sun set. The Jose Marti airport is about seventeen miles (25km) from Havana. I chugged into the city in a Chevrolet taxi with the exhaust fumes of the Buick in front choking my sanitized senses through our open windows. The streets were alive with people and chaotic traffic swerved in tune with blaring car horns. I felt a mixture of reawakening and guilt. I felt alive again, and I loved it: the sights, sounds, smells and organised chaos of the developing world entering our car and my brain. I felt glad that there were still places like this in the world, but I knew I shouldn’t because it was an environmentalist’s worst nightmare! 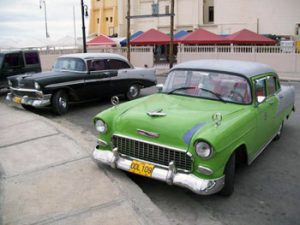 Once I reached the hotel and the initial buzz died down I hoped once again that Cuba, as other countries, would be able to clean up their air. A notice in the bathroom asked guests to leave unused towels on the rail, to save on the laundry and environmental impact.

I’d booked into the Lido Hotel, which the Lonely Planet Cuba guide considers a main haunt in the city. Lonely Planet describes the hotel as a friendly but lacklustre institution, and I found that pretty accurate. The balcony doors wouldn’t close properly, and I didn’t find the blankets, so the night was a little chilly. I was awoken pre-dawn by the crowing of a rooster, and later identified a chicken house on the roof across the road.

The hotel’s roof restaurant served a good breakfast in the morning. The weather was cloudy and cool. With my Cuba guide book in hand I set off after breakfast, and headed towards the dome that I could see from my hotel balcony. The streets were already a hive of activity, with traffic, people and dogs vying for the limited room offered between the colourful and crooked streets.

A few minutes later I entered the grounds of the Capitolio Nacional building, and walked towards its imposing front, which is similar to the US Capitol Building. It was built between 1929 and 1932, and held the Cuban Congress until 1959. It is now used by the Academy of Sciences and the National Library of Science and Technology. 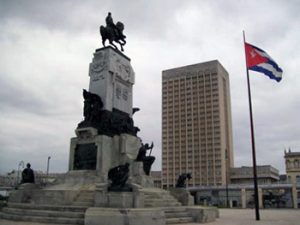 Then I headed to the Malecon, Havana’s famous five mile sea wall, and reached the area at the Parque Maceo. Situated across the road from the high-rise hospital, the park contains the impressive Monumento a Antonio Maceo. Built in 1916, the statue has Maceo, the mulatto hero of the first war of independence against the Spanish, which ended in stalemate during 1878 after ten years of conflict, on horseback above symbolic Cuban figures around the base.

Leaving the park I walked along the Malecon in the direction of Havana Vieja (Old Havana), which was signposted by an old Spanish fort that guards Havana from a headland across the harbour. I walked on the other side of the road from the sea most of the time to avoid the waves that crash over the wall at regular intervals, but crossed over to the sea side when I saw dry tracts of pavement next to the wall.

Castillo de los Tres Magos del Morro (Morro Castle) was built by the Spanish in 1589, and its walls spread dominantly inland for hundreds of yards; leading to a Rio style Christ statue and then the docks. After taking in the view across the water I headed into the narrow cobbled streets of Havana Vieja, passing the ruins of the Castillo de la Real Fuerza, an open air market and the Palacio Velasco; an intricate art nouveau structure that now houses the Spanish embassy.

Another impressive statue loomed, and on closer inspection I saw it was of Carlos Manuel de Cespedes. Cespedes is known as the Padre de la Patria (Father of the Nation); he was a planter in the south of the island who freed his slaves before starting the first war of independence in 1868. 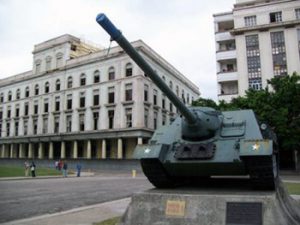 It was only after being introduced to Maceo and Cespedes, two heroes of the first war of independence, that I came across the first symbols of the most recent revolution. Walking down Plaza 13 de Marzo a banner celebrated the fiftieth anniversary of the overthrowing of President Batista, and at the end of the park a tank used in the Bay of Pigs battle in 1961 sits across the road from the Museo de la Revolucion. 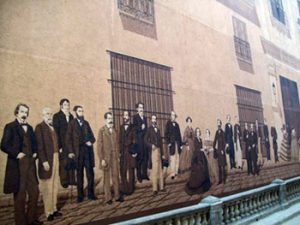 The museum is housed in the former Palacio Presidencial. Tiffany of New York decorated the interior, and its lavish beauty has been preserved: Classic period soldiers, both male and female, mix with angels in a gold and white visage. The presidential office (1920-65) and Council of Ministers (1959-65) are two of the highlights, and there is a wealth of information and artifacts about the revolution and last half-century.

The museum is of course biased towards the current administration, but the Batista dictatorship was obviously heinous. Cameras are allowed in for an additional charge, and I was not challenged when taking notes. There are more remnants of the revolution behind the museum, including a plane and the yacht named Granma that carried eighty-two rebel soldiers from Mexico to Cuba in 1956.

After exiting the museum I headed out to the Vedado district, and the Plaza de la Revolucion; this is where Castro and the Pope have talked to over a million Cubans. On one side of the road is the Memorial Jose Marti; the highest structure in Cuba at over 400 feet (142 meters). Marti was a writer who led the second war of independence against the Spanish in 1895, and was martyred early in the conflict. 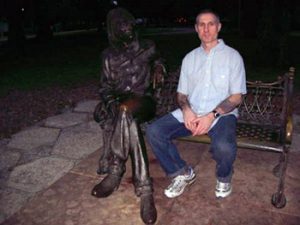 he presidential office is situated behind the statue, and as I was late arriving at the entrance I was told in no uncertain terms to leave the area. On the other side of the plaza is the Ministerio del Interior, which features a massive mural of Che on its front; it is best viewed after dark, when lit up.

The other main draw for me in Vedado was a John Lennon park statue, so I tried to reach there before evening. I made it, after getting the hang of the odd and even numbered streets with no names. An old man was sitting next to ‘Lennon’ and he quickly put some trademark glasses on the singer, before jumping up to take my photo alongside the musical revolutionary.

Having seen the sights I wanted to visit on the first day I spent the second perusing the plazas, churches and shops of Havana Vieja in a more leisurely fashion. A Paul and Shark designer shop stood out among the older establishments; I don’t know if Che would have approved, but would Maceo, Cespedes and Marti?

Virgin-Atlantic (www.virgin-atlantic.com) flies direct to Cuba from the UK, while Air France (www.airfrance.com) via Paris is another option.
Searching on www.netflights.com and www.opodo.co.uk can also help you choose the best offers.
The Cuban consulate in London states that everybody now needs a Tourist Visa card. See: www.cubaldn.com It is £15 for British citizens, and the application details are on the website HERE.
There is more info at: www.lonelyplanet.com. (The Lonely Planet guide seems to be the ‘bible’ for the island, although it is three years old now.)
Video of Havana’s Malecon by Marc: www.youtube.com
Other Cuba videos by Marc can be found at: www.youtube.com/user/greenygrey3

About the author:
Marc Latham travelled to all the populated continents during his twenties, and studied during his thirties, including a BA in History. He now lives in Leeds, and is trying to become a writer from the www.greenygrey.co.uk website.

Photo credits:
First Havana photo by Spencer Everett on Unsplash
All other photos are by Marc Latham.