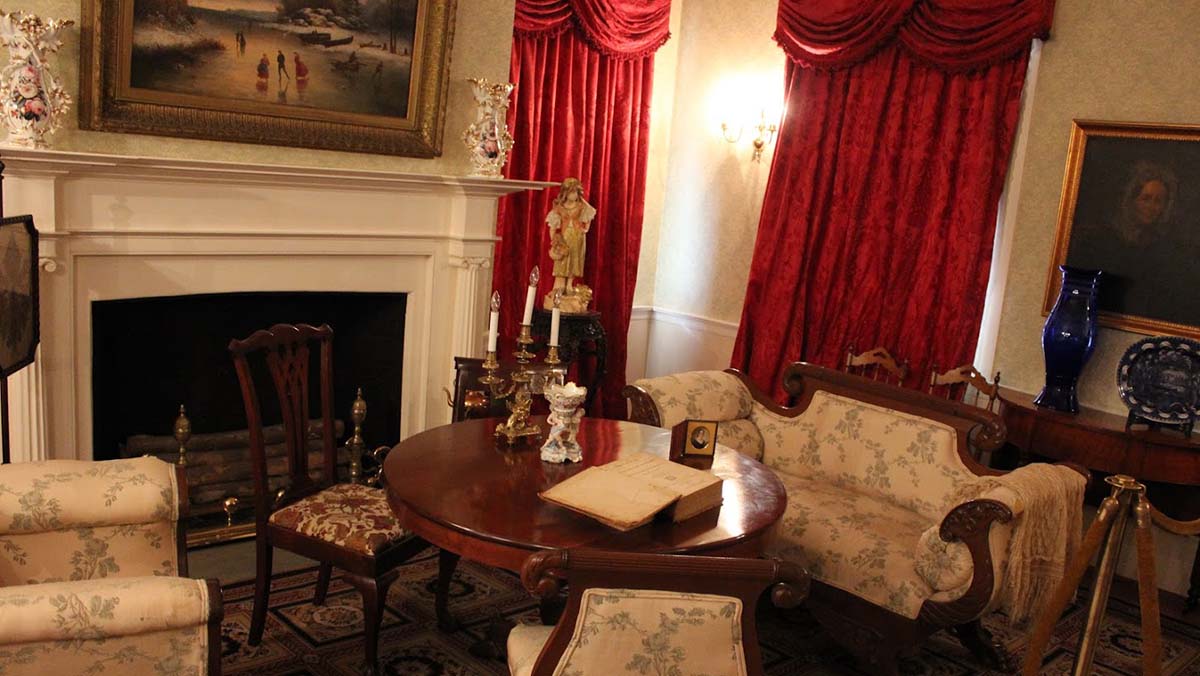 Upon entering the Mary Todd House, it’s the original banister that catches your eye. Abe Lincoln on his visits could have placed his hands on the very same wood. This is the first house museum in America to honor a First Lady. 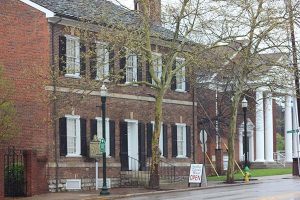 Mary’s grandfather was one of Lexington’s original settlers. Before Mary’s father, a prominent Lexington businessman, bought the house in 1831, the building had been a stagecoach stop. She lived here from the ages of thirteen to twenty-one. The style is late Georgian (early 19th century).

On the day we visited, the crimson drapes had been drawn (photo at top), commemorating the 150th anniversary of Abraham Lincoln’s assassination.

A nearby creek supplied the Todds with water. A slave auction site was located only a couple of blocks away. 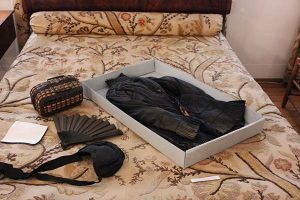 Restored in the 1970s, the historic home now appears as it did when the Todds inhabited it. The furnishings are designed to chronicle life as it had been in the early 19th century. There were two parlors, one for the family and one for guests. Mary’s bedroom is especially interesting. The original desk displays her Bible and inkwell.

The house features period furnishings and many of the family’s personal possessions. The shawl on the back of a chair belonged to Mary as well as the original Meissen collectables. The candelabra the Lincolns used in the White House sits on the dining room table. The photographs next to an 1817 Bible belonged to Mary’s stepmother. Mary’s mourning wardrobe is laid out on her bed. 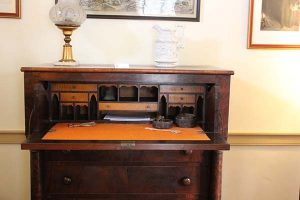 The chest of drawers was actually a desk, called a butler’s desk. The top drawer opens to reveal a desk a little over waist high. That way the speaker could stand and conduct business. Then, there was the piano with less than eighty-eight keys and four pedals instead of three. 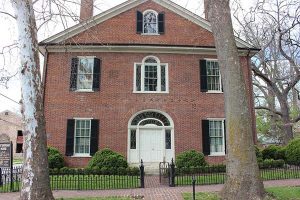 We were back in the early 19th century at the Lexington home of John Wesley Hunt, confederate grandfather, who moved to Lexington in 1795. He became a merchant, horse breeder, hemp manufacturer, banker and first millionaire west of the Alleghenies. In 1814, he built a two-story brick mansion known as the Hunt-Morgan House. His grandson was John Hunt Morgan, a general in the Confederate Army.

The period furnishings give visitors a glimpse into the social interaction of the day. Rooms were dressed seasonally, with slipcovers, straw mats and rugs for summer, dark colors in the winter. There were nine bedrooms; the nursery being the smallest.

Fire screens had a special function. In 1814, women wore heavy makeup to cover smallpox scars. Their makeup would melt if they were seated too near the fireplace. Hence, the screen. They would bathe, but not often and only on special occasions. An embroidered screen is on display in the Hunt’s bedroom along with an original dining table and wooden mantel. 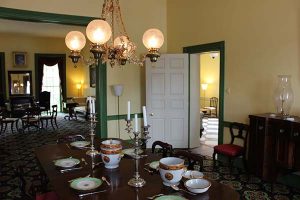 Air conditioning consisted of moving beds near windows in the summer. The ceilings were fourteen feet high, thus providing increased air movement. Oil lamps or candles were used for lighting. In addition, mirrors provided light reflection. The summer kitchen was outside, keeping additional heat out of the house.

Mr. Hunt conducted business from a room with special door to the outside. His original travel trunk is on display next to the chest of drawers. The visitor can also view his 1810 Bible and glasses. It’s hard to imagine dining ever being a casual affair with tables set with china and silver candelabras at either end. Check out the 1805 serving spoon. 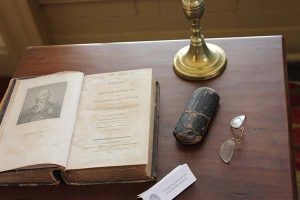 Since photography had yet to come into being, portraiture was a frequent thing. The one of John Wesley Morgan, with an amused look on his face, sits in the main parlor. Card playing was a frequent source of enjoyment.

The artifacts reveal how people lived. Glasses had no sides and were perched on one’s nose. Hunt’s worn eyeglass case sits next to his glasses. The travel chest he used on his travels is on display in his office. (The trip from the east coast to Lexington took three weeks.)

A display of Civil War Museum artifacts is located on the second floor. Especially notable are the items associated with General John Hunt Morgan and his “Morgan’s Raiders.” 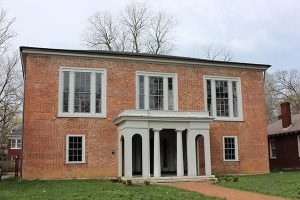 Right in the midst of a Lexington residential neighborhood is the 1811 house designed by Benjamin Henry Latrobe, known as, the “nation’s architect.” A friend of Thomas Jefferson, Latrobe oversaw the construction of the U.S. Capitol, and designed parts of the White House.

The design was unique: a perfect square, with a domed, circular rotunda in the center of the second story. Latrobe drew his inspiration from 16th Century Italian architect, Andrea Palladio.

Reservations to tour the house are a must. Jason, of the Blue Grass Trust, met us at the door. We could not help but notice that the interior was stripped of any wallpaper, or furnishings. It was down to the very basics.

As we walked on the wooden planks, Jason pointed out what had been the sitting rooms, the dining and bedrooms, etc.  He also described what life was like in the early 19th century. 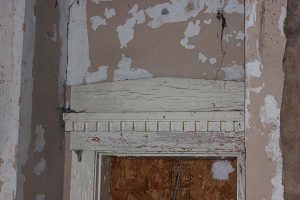 The absence of wallpaper allowed us to examine the horsehair makeup of the plasterboard. Behind, lay brick in a design known as Flemish Bond Brickwork. This gave the structure strength plus design.

On the second floor, we could look up and see the circular configuration where the dome had been. The dome was destroyed by fire in 1986. This enables the restorers to see remodeling over the decades down to basic Latrobe. After the fire, the property was purchased by the Blue Grass Trust. They have carefully restored the exterior to its 1812 appearance; the interior is an ongoing project.

Besides fundraising, the biggest question facing the committee was to which period it should restore the villa. It was decided that the restored home would represent the 1812 period and Latrobe’s original intentions as much as possible.

All three of these historic properties can be easily viewed in a day. It’s a wonderful informative step back in time on a day trip to Lexington. 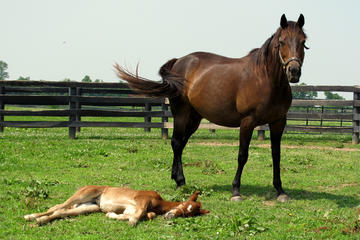 Photo credits:
All of the photos are by Wynne Crombie.