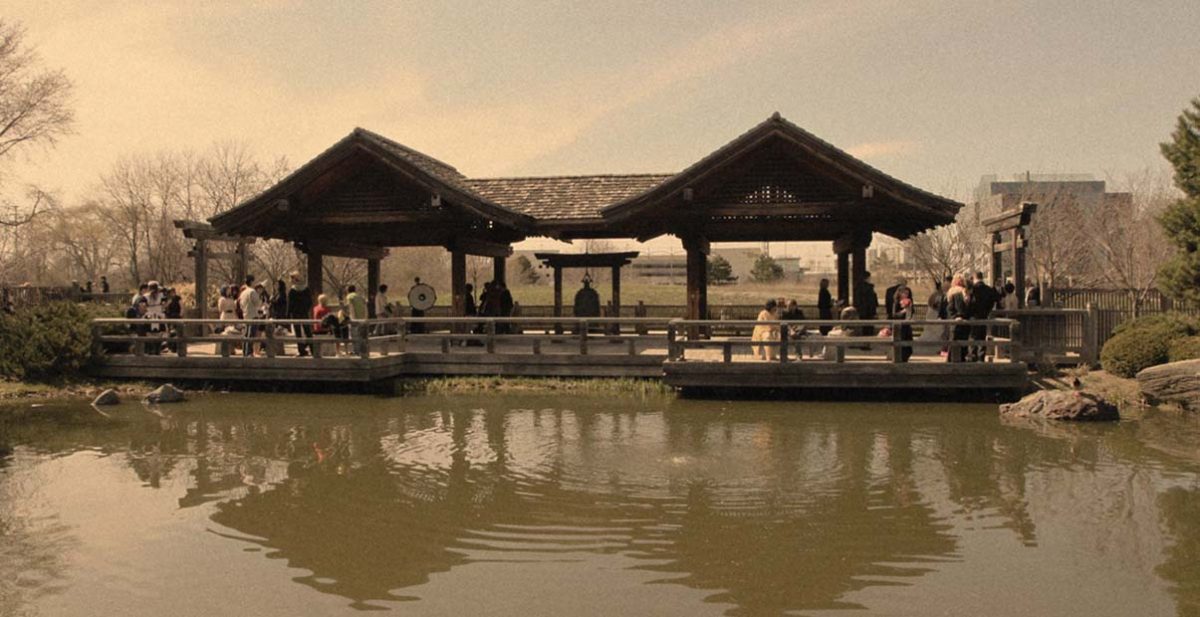 In the city centre of Mississauga, Ontario, a city which is part of the Greater Toronto Area, there is a “secret” garden, which cherishes the part of the city of Kariya, Japan. Mississauga and Kariya have been twin cities since 1981 (38 years). Many don’t know that just a step away from the busy city centre and well-known Square One Mall, nestled among tall high-rises, is the Kariya Park, that brings a little peace and calmness to the buzzing city life. The idea of the Japanese gardens is to “delight the senses and challenge the soul” as well as to create the sense of balance and aesthetics. 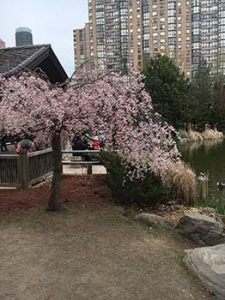 In Spring, which here in Southern Ontario usually comes in late April or early May, you may enter a different world and be embraced with lush cherry blossoms, birds singing, the calming flow of the wild ducks in the pond, squirrels playing in trees or chasing each other in the grass. Even visitors unconsciously start whispering when entering this oasis of calmness. You walk or sit on a bench and just surrender to the serenity and give yourself the wonderful gift of a quite moment. 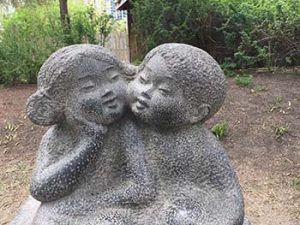 Among the trees and bushes you will find several nice stone sculptures which makes you wonder who created these beauties. I have always been drawn and charmed with particularly one sculpture (The statue of Friendship), a boy and a girl embraced in a sweet hug with joy on their faces. Every time I see them, they just brighten my day.

This “secret” garden, a piece of Japanese culture and creativity is a gift of friendship from Kariya to Mississauga. It was completed in 1992 and ever since warms the hearts of Mississauga’s residents and visitors who discover the park. So, leave your shopping bags loaded with gifts and souvenirs in the car and walk to this centre of slow pace and enjoyable sounds. 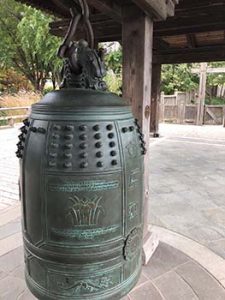 Walking on the path by the pond, you will come to the Pavilion, which looks toward the pond and the exterior Zen garden. The two sections of the Pavilion represent the two cities, united in the centre with the Friendship Bell. The Friendship Bell was partially sponsored by the Main Street Ontario funding program and cast in Japan. It is rung on ceremonial occasions. The bronze bell was installed for the Phase II Opening Ceremonies on July 7, 2001. The Friendship Bell has images of iris flowers, which are the official flowers of Kariya city, Canadian maple leaf as well as an inscription which reads: “By welcoming the new century this bell is produced as a symbol of everlasting friendship between the City of Mississauga and the City of Kariya. It is our sincere prayer that the toll of this bell will spread peace and happiness over the world of our society. July 7, 2001.”

While wandering through the park, think about others just like you, on the other side of the world in Kariya city in Japan, who are walking along the garden paths discovering the beautiful Mississauga Garden with a small-scale replica of Mississauga’s city hall and the clock tower surrounded with colourful blossoming flowers.

These two city gardens are the symbols of blossoming friendship between two cities and their residents. These are the places where they connect, where they learn about each other and look further in to the future. Every year there are more events, meetings, student exchanges where citizens of both cities become closer and give a little contribution to the wish of total world peace and friendship.

This year, as several before, cherry blossom tree fans came from Toronto and nearby cities or visitors from far away to specifically enjoy and photograph the cherry blossom, the symbol of Japanese Spring. Some of them came to take memorable wedding photos among the cherry flowers.

Next time when you land at the Toronto International Airport (which is actually in Mississauga) don’t forget to visit the Kariya Park. Just a few minutes spent here will re-charge your batteries and give a new boost to your busy life.

So, how did all this start? In the period after the Second World War and the “cold war” in 1960s there was an initiative and movement supported by mayors and residents to start connecting cities around the world, to extend the hands of friendship and make our world a better place to live. Mississauga’s twin city Kariya is located between the cities of Kyoto and Tokyo on the island Honshu. It has approximately 150,000 people and it is known for the auto industry and agriculture. The Mississauga Park in Kariya was opened in 2001 to celebrate the 20th anniversary of the cities twinning. “The Water Road” sculpture in the park, a work by the artist John McEwen, presents a bear in a canoe, a symbol of Canadian history and culture carried from the past to the future. The City of Mississauga, Canada is a vibrant city with a population of over 700,000 situated on the shores of Lake Ontario. The city’s motto is “Leading Today for Tomorrow.” Many Fortune 500 companies have their headquarters in Mississauga, and the city’s strongest industries are banking and finance, pharmaceuticals, electronics and computers, aerospace and transportation.

The Park address is Kariya Drive (across the Square One Mall), Mississauga, Ontario.
Park is open to the public seven days a week from 7:00 am to 9:00 pm.
Dogs and other pets are not allowed to the garden. 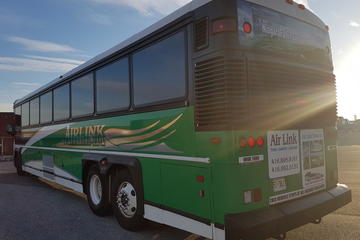 Mississauga Coach Tour of Niagara Falls with B-Lunch and boat

Sonja Slijepcevic is a freelance travel writer and photographer, a member of the International Travel Writers and Photographers Alliance (ITWPA), who for years has been combining her love of travel, passion for photography and professional career in the project management field. She likes meeting people from different cultures and backgrounds, enjoys history and art, and likes to write about these experiences. Some of her photography and articles have been published in different Canadian magazines and newspapers such as Travel Thru History or Wanderous Affair. She was born in the capital city of Croatia, Zagreb and has been living in Canada for 26 years.

All other photos by Sonja Silijepcevic