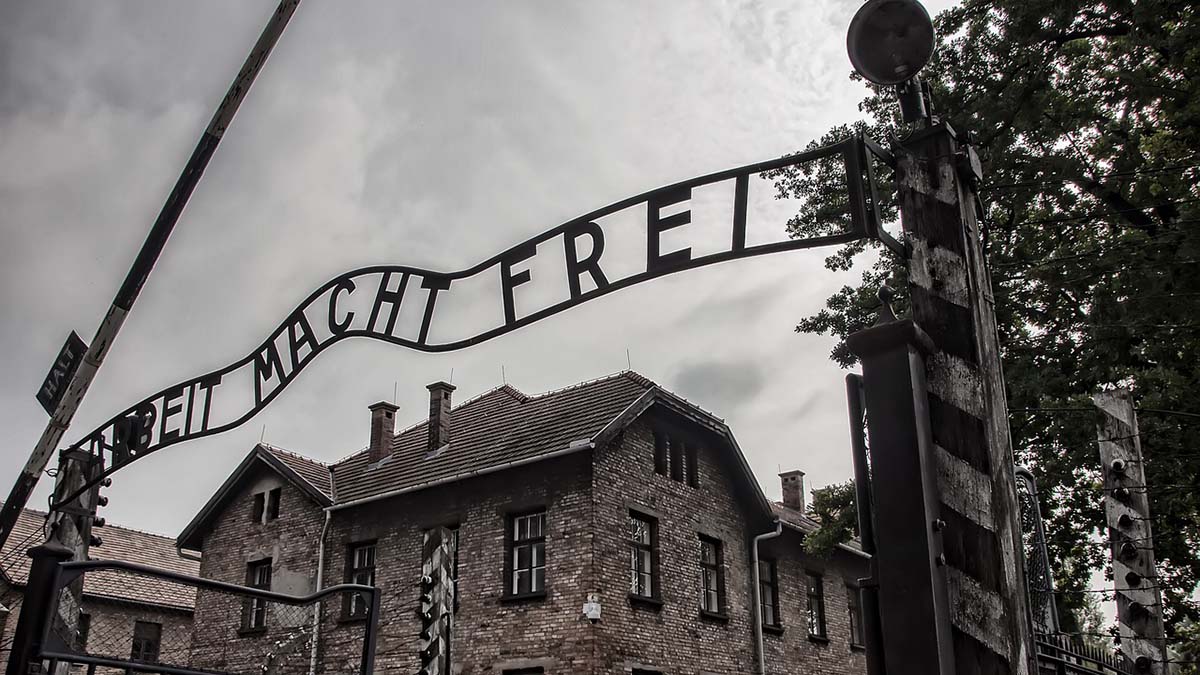 I hear the distraught French woman wail as she pounds her fist on the French Holocaust memorial stone at Auschitwitz-Birkinau Museum in Poland. I watch her place the cheerful bouquet of pure white daises, burgundy and canary roses along with a single large gold sunflower wrapped in the blue, white and red French flag on the snow covered ground in front of the memorial. Her male companion tries to comfort her but she sinks deeper and deeper into her grief as she bangs her fists on the memorial and looks up at the sky shrieking,

Beside me, I look down at a similar memorial, written in English.

Forever let this place be
A cry of despair
And a warning to humanity
Where the Nazis murdered
About one and a half
Million
Men, women, and children
Mainly Jews
From various countries
Of Europe
Auschwitz – Birkenau
1940 –1945
(Memorial at Auschitwitz-Birkinau Museum, Poland) 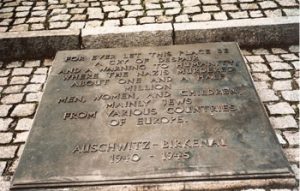 I had driven in the snow for two hours from Rybnik, a small town in southern Poland where I taught English. It was the beginning of February and the weather was predictably Polish; snowing and –10 degrees C. It stopped snowing on my arrival at the small town of Oswiecim, which was a quaint and isolated town for most of its 700 years history until the twentieth century when it gained notoriety by its German name, Auschwitz. During the Second World War, the Nazis changed the town’s name and used it as the site for two of the largest concentration camps, (Auschwitz and Birkenau) in Europe for the genocide of over a million of Jews, Poles, Gypsies, Russian POWs, German homosexuals and others of non-Aryan heritage. After the war, the former concentration camps were preserved as the Auschwitz-Birkenau State Museum by the Polish government to honour the victims of the Holocaust.

My tour at the Auschwitz site. began after I had watched the disturbing short video summarizing the Nazi’s cruelties in the Second World War. I decided against an English guide and choose to explore the museum alone. The harsh winter conditions meant that there were only about twenty adult visitors on site. 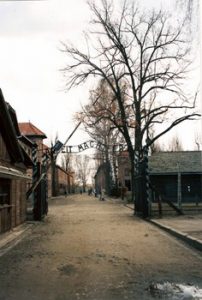 As I walked under the infamous sign “Arbect Macht Fret”, (Work Will Make You Free), I thought of prisoners who were marched every morning for roll call, then marched to work for ten to twelve hours of hard labour or to their death. It was under this sign, I first noticed the French woman carrying the cheerful bouquet of flowers. She was dressed like all the other female visitors including myself in heavy winter clothes from head to toe in black. The stunningly beautiful bouquet wrapped in the French flag in her left arm was a sharp contrast to the collective sombre mood of the museum. She had her right arm looped with her male companion. For the rest of the visit, the French couple and I were never more than a few steps apart.

I examined in horror the displays of possessions confiscated from the murdered victims including baby clothes, glasses, and hair. I was captivated by the eyes of the prisoners in thousands upon thousands of photographs. Most of the prisoners never survived the war. I felt numbed when I saw that some of the prisoners came from the same hometowns as my Polish students. My students had been quick to make me realize that their families had lived and died during the heinous crimes of the Second World War whereas my family, like most other families in North America, had merely learned of these events through the media. One day while walking in the forest on the outskirts of Rybnik, I discovered unmarked graves with flowers and lanterns near what appeared to be a memorial for Oswieicim. I learned later from a Polish historian that during the war, Nazis often threw the dead bodies in remote places from the trains while transporting prisoners to Auschitwitz. The local people would later bury these bodies in unmarked graves. While scanning the map of the French train routes during the Holocaust, I noticed they passed by Rybnik. 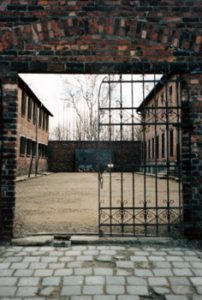 I followed the French couple into Block 11, the prison within a prison, and learned how a few select humans had found inhuman ways to torture others. I crawled into the “Standing Cell,” where men were made to stand all night without toilet facilities after working 10 – 12 hours with very little food and drink. They would be forced into the same regime in the morning. I shuddered and quickly crawled out into freedom. The French woman crawled in with her flowers while her companion waited outside.

While we observed the suggested two-minute silence in the courtyard, the French woman stood silently with a quiet strength clutching her flowers as her companion wiped the tears from his eyes. Her eyes were intense and sorrowful but always dry, just like mine. The courtyard contained the “Death Wall,” where thousands of prisoners were forced against the wall and shot in the head from behind. Most of the other visitors wept and whispered in Polish as they placed the traditional single yellow rose or lantern at the site.

Outside, the French woman falls to her knees and buries her face in the snow. She jerks her head toward the sky. Black tears stream down her cheeks splashing the snow-covered ground like little black flowers. She clenches her fists and screams “Pour quoi? Pour quoi? Pour quoi?”

Why? Why? Why? I can hear an angry voice inside my own head yet I feel no anger. I feel only sadness, a deep overwhelming sorrow that chewed away all the happiness, hope and love I had ever felt. My veil of false stoicism lifts and tears pour down my cheeks to confirm my humanity. I lean back on a large stone for support; a stone from the remains of the crematorium, an oven used in the genocide of men, women and children. I can only weep as the poignant memories of this desperate place chase away my strength and pride. 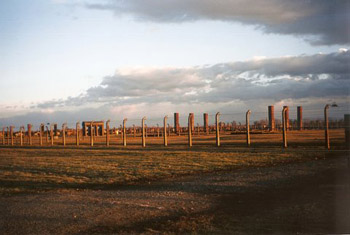 Photo credits:
First Auschwitz entrance sign photo by Peter Tóth from Pixabay
All other photos are by Anup Parmar.

About the aulthor:
Anup Parmar grew up in Vancouver. She taught and trained students in health care and taught English in Saudi Arabia, United Arab Emirates, China and Poland. Anup has enjoyed traveling to many remote and isolated places around the globe. She currently teaches health care workers in Vancouver.
Contact: anup_parmar_99@yahoo.com