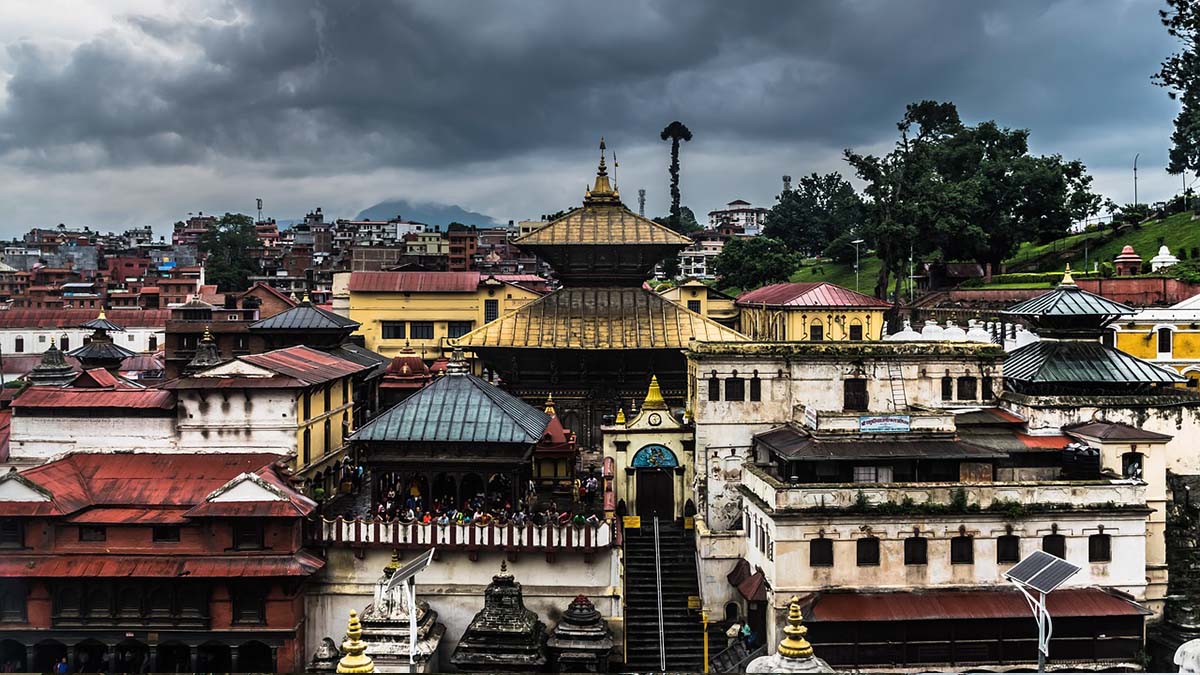 Gateway to the Himalayas

It is hard to believe that Nepal only opened its borders to mass tourism in the 1950s. Now it is famous for its trekking and climbing, as it utilises the fact that most of the world’s highest mountains are within its territory. 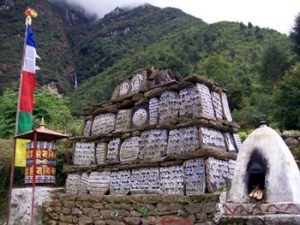 There was a storm over Kathmandu as we flew in, so the plane circled once before descending into the Kathmandu Valley under the shadow of high mountains to the north of the city. My travel companion, Nick, and I exchanged small amounts of money at Tribhuvan airport (4390 feet, 1330 metres) before changing more for a better rate in the city (it is just over 100 rupees to a £UK, and 70 to the $US at the time of writing).

There was a crowd of taxi drivers and guides waiting at the airport doors, and we took a taxi for the four miles (5.5 km) journey up to Thamel in the north of Nepal’s capital city. The monsoon opened up again on the way, and the big globules of heavy rain looked like salt being poured on the wounds of the pot-holed streets we zig-zagged through to avoid other cars, scooters, pedestrians and animals. 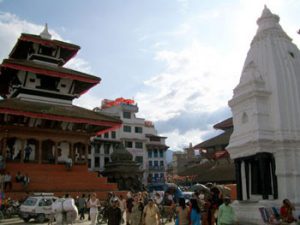 The first hotel we were taken to was full, so they took us around the corner to the Impala, which is a nice and clean hotel with friendly staff and a cheap restaurant. Walking through Thamel I enjoyed the explosion of activity, ornaments and culture the area heaps on you. Intricately detailed mandalas, hand-sewn Himalayas t-shirts and poetic prayer flags visually call out to be bought under music emitting from upstairs pubs and restaurants like Tom and Jerry, Celtic Manang and Reggae Bar. Although there is noise, hustle and bustle there is no overt sense of threat to person or possessions; but it’s obviously best to keep alert, as there is crime in the city.

There are many small Hindu temples with intricately carved representations of Shiva and Ganesha illuminated by candles along the street, which together with the old balconied buildings maintains a sense of the mysterious and exotic east. Traditional clothes worn by women and the all over visual effect provided by sadhu holy men matched the spices in the market for colour and brightness. Cows also meandered through the streets looking as relaxed as they do in countryside meadows. 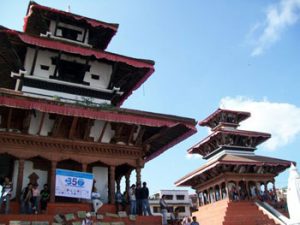 A procession celebrating the festival passed us on the corner of the post office, where Kantipath meets Khichapokhari, near the nine-storey high Bhimsen Tower (Dharahara). An effigy of the goddess Durga was carried in the back of a van, and worshippers played music, danced and burned incense around it. 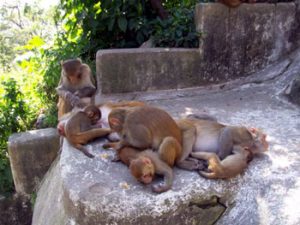 Not having been aware of the majestic buildings located in Kathmandu’s Durbar Square (there are two other Durbar Squares in the Kathmandu Valley) before reaching it only added to the excitement and appreciation I felt as the full scale of the wonderfully impressive complex came into view. The square is now known as Hanuman Dhoka, which is derived from a statue in the square devoted to Hanuman, the monkey devotee to the Lord Ram.

By the time we reached the Trailokya Mohan, Maju Deval and Narayan temples all in a line I was quite awe struck, and they were complemented by the Shiva-Parvati and Bhagwati temples to the side. We climbed up the Maju Deval and sitting alongside locals and tourists alike we watched the pedestrians and scooters waltz and whizz through the temples and vibrant market below. The sun was shining and temperatures were in the twenties centigrade (seventies Fahrenheit).

Durbar Square evolved over several centuries, and is now a UNESCO World Heritage site. It is thought that the first temples were built on the site during the Licchavi era (400-750 AD). The most significant period of construction on the site was during the reign of the Malla Dynasty (12th-18th centuries). It was also during this time that the people of the Kathmandu Valley became united under the Newar identity, after the feudal lords that had reigned before were brought in line. The negative side of this unification was that King Ratna Malla (1484-1520) also introduced the caste system that has caused much suffering since.

Fast forwarding to the 1960s and 1970s, the main hippie and traveler enclave of that era, Freak Street, is only a short walk away from Durbar Square. Government pressure ended its days as the city’s international hub, but it still has shops, guest houses and restaurants that are a reminder of its former glory. The Annapurna Lodge restaurant (Diyalo) provides a nice secluded setting and has a cheap Nepali food set meal and Everest beer.

Walking back to Thamel from Durbar Square after dark is not a straightforward task, and especially when there is a blackout! But the dark streets do awaken the senses, and the blaring of traffic congested horns sound much louder and more out of place as candlelight evokes imaginings of the Kathmandu of old reincarnated.

Trekking to the Everest National Park 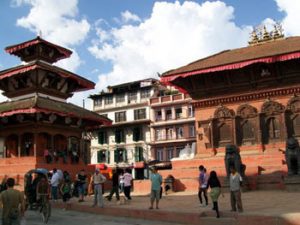 We’d arranged bus travel to Jiri for the next day through Eagle Treks and Expedition, and the hotel called us a taxi to the bus station. The station was quite manic, but a local escorted us to our bus, and we arrived safely in Jiri that night. We hiked for a week up to the Sagarmatha (Everest) National Park, and then for a few more days up to the turquoise lakes of Gokyo. The late monsoon cloud and intermittent rain that had accompanied us on the first week of the trek cleared when we reached the park, and we had wonderful clear views of Mount Everest (29,002ft, 8840m) from the top of Gokyo Ri (17,580ft, 5360m). We hiked back to Lukla via the Pangboche and Tenboche monasteries, and flew back to Kathmandu with Yeti Airlines from the sloping cliff-edge runway. A seat on the right of the plane provided fantastic views of the Himalayas all the way back to Kathmandu. 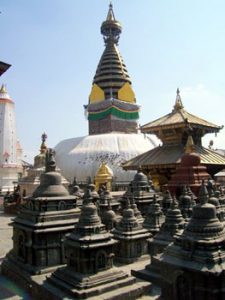 Upon our return to Kathmandu there was one attraction that seemed a must see, as most locals had been asking if we’d visited it while in the city. Siddhartha Gautama, the first historical Buddha and originator of Buddhism, is said to have visited the location of the Swayambhunath Monkey Temple on his travels. Not surprisingly, it is therefore one of the most important Buddhist sites in the world. The temple is also thought to be one of the oldest structures in the Kathmandu Valley; dating back to the Licchavi period.

So after relaxing for a day we took a taxi (200 rupees) from the hotel up to the temple steps (365 in all). There is a small entrance fee to the main complex, which has several temples, chaityas, shrines, prayer wheels, shops, stalls; and yes, lots of monkeys. It also provides a bird’s eye (and several buzzards were sharing the air space) view of the Kathmandu Valley. The blue (sky/space), white (air/wind), red (fire), green (water) and yellow (earth) prayer flags that had provided welcome colour on trek peaks stretch out in all directions from the main stupa dome. The prayers written on the flags are supposed to be carried around the world on the wind, and on that clear sunny day it was not difficult to imagine them being conveyed up and over the holy mountains to the trekkers’ Shangri-la in the north. 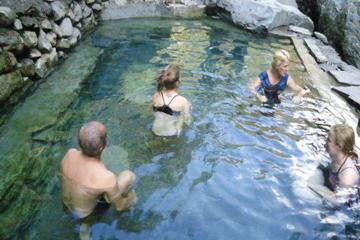 About the author:
Marc Latham traveled to all the populated continents during his twenties, and studied during his thirties, including a BA in History. He now lives in Leeds, and writes out of the www.greenygrey.co.uk website. To view his videos, go to www.youtube.com/user/greenygrey3. He has had three books published by Chipmunka.

Photo credits:
First Kathmandu photo by Bijay Yadav from Pixabay
All other photographs by Marc Latham.