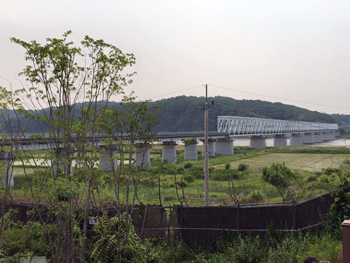 This summer a land mine injured two South Korean soldiers. South Korea responded by reinstating cross border propaganda broadcasts and North Korea responded in turn by with shelling. But as these periodic arousals of tensions between the North and South often do, the story disappeared just as quickly as it arrived with relatively little change in the status-quo between the two countries, which has persisted in much the same way since the end of the Korean War in 1953.

It is a surprising fact to many foreigners, like myself, that although much of the international news from the Korean peninsula concerns incidence like these, within South Korea news about this over 60 year-old conflict receives comparatively little attention. Indeed, during a recent trip to Seoul, the only media coverage I saw of the conflict (limited to images and English language media) focused on a controversy about some images of a North Korean missile launch being Photoshopped. So what explains the seeming indifference of South Koreans themselves when much of the rest of the world is so fascinated by the divide between the modern South and proto-Stalinist North?

Curious to see the reality of this North/South divide first hand, I took a tour of a portion of the 260 kilometer long demilitarized zone (DMZ) that separates North and South Korea. There are many tour companies throughout Seoul running these tours, offering visits to various historically significant sites along the border for between 40,000 and 130,000 won ($35 to $115) depending on where they stop. I found it difficult to find a tour for the dates I wanted, even while booking a month in advance, which says something about the popularity of these tours. Unfortunately, I couldn’t find any company that was able to book the full DMZ tour, which includes a trip to the Join Security Area (JSA) the only portion of the DMZ where North and South Korean forces stand face to face. Because of the sensitive nature of the JSA, tours there require advanced notification of participants at least three days in advance. 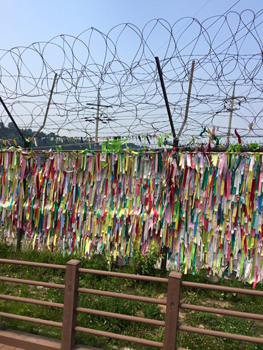 The tour I eventually booked was planned to include a stop at an observation site along the DMZ and the third infiltration tunnel, one of the numerous tunnels from which members of the North Korean Army have tried to infiltrate the South. Unfortunately, I was in Seoul during the height of the MERS scare. From the day I arrived in the city until the day I left, I probably saw the number of Koreans wearing surgical masks in public double. So when the day of the tour came around, the tunnel had was closed due to concerns about the spread of the disease in its close confines. The tour company replaced the trip to the Infiltration Tunnel with one to the Bridge of Freedom, formerly a location where prisoners of war could be repatriated to the South.

Traveling out of Seoul and towards the DMZ lead us along the Han River where constantly manned guard towers were spaced about every 100 meters. Our tour guide pointed out to us how vital these towers were to the security of Seoul. He described how there have been amphibious encroachments into the city by North Korean operatives using the river. He also mentioned, nonchalantly, that North Korea presently has the capability to destroy Seoul in less than two hours. I, along with some of the others on the tour with me, was incredulous of this claim. Pyongyang has certainly threatened on numerous occasions to turn Seoul into a “sea of flames,” but would a modern country like South Korea really be powerless to stop a destructive attack from the North on their most important city? These comments seemed to confirm a suspicion I had when I signed up for the tour, that although these tour are, as far as I know, not sponsored by the government, they do to some extent serve a propaganda function. 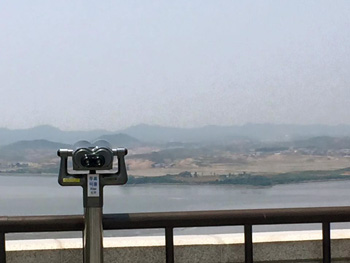 However, other than those early experiences, for the most part the tour did not feel like a propaganda exercise. Of course, the negative aspects of life in the North were emphasized, but this would be hard not to do considering the indisputable realities of life in the Kim family’s North Korea. Most of what was said did not feel over the top. This was refreshing. Often stories from the North that make their way to the United States tend to be filtered through the most fervently anti-North Korea media or are just plain inaccurate. For example, a report that Kim Jung Un’s uncle had been executed by being fed to hungry dogs, which was picked up by media throughout the United States, turned out to not be true. It originated with satirical Chinese social media post.

Far from completely creating a manufactured view of the North, the tour’s first stop was a museum with an observation deck where one could look directly at a small farming village across the DMZ. The museum housed artifacts including treaties between the two countries, North Korean military medals, currency, and even soju, Korea’s national liquor. There were also symbols of reunification, including examples of countries that were once divided. Some of these were inspiring (Germany) and some were less so (Yemen). The most interesting symbol of reunification was the imagined “Seoul-Pyongyang-Paris” bullet train, which the Museum suggested would take tourists from Korea to Europe as soon as reunification was achieved. Dorasan Station located in another part of the DMZ did indeed once connect the North and South by train. It is, however, understandable why a rail link between the North and South might figure prominently in the imagination of some South Koreans, South Korea currently has no land borders, aside from the one with the North. 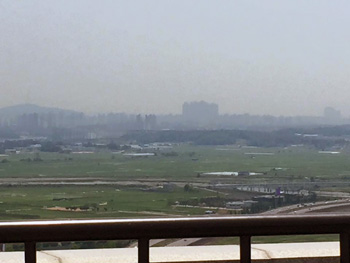 s seen from the overlook at the top of the Museum, the contrast between the two sides of the DMZ was stark. Within sight of the viewing platform were both the dense skyline of Seoul and the vast expanse of suburbs surrounding it. Turning 90 degrees and facing the North revealed a small farming community with a few crudely built structures, some of which lacked roofs. There were about twenty North Koreans working on the farm. The area of the DMZ near Seoul is one of the most populated parts of the DMZ owing to the fertile farming made possible by the Han River.

The comparison between the two sides is certainly somewhat unfair. If Pyongyang, North Korea’s main metropolis, was as close to the DMZ as Seoul, the difference between the two sides of the border would be less obvious. But even the development of Pyongyang is somewhat of a farce. The over 1,000 foot tall Ryugyong Hotel, the city’s centerpiece, has remained unfinished for decades. Although I’m sure there are some rural parts of the South not altogether different from what I could see in the North. The voyeuristic nature of watching others go about their normal lives was odd. These tours take place daily. Anyone who goes to the observation deck cannot help but wonder what those on the other side of the border think about the gawking tourists watching them, assuming they had strong enough binoculars to look. With the lack of context provided by the tour, watching these people was really just an opportunity to write whatever preconceptions we had about life in to the North on to these people across the border from us. To some they may have looked like suffering laborers, slaves to a dictatorial regime. More likely they were just regular farmers doing their job and making the most of their lives in often difficult circumstances. 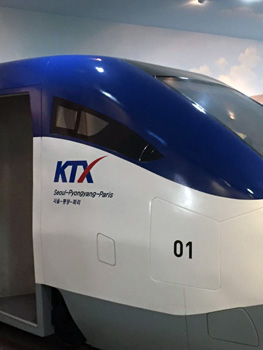 After the museum, we headed to the Bridge of Freedom located adjacent to Imjingak Park. During the Korean War, the bridge was a place where defectors could cross from the North to the South, knowing that they that they may never be able to go to the other side again. Since the end of the war, families would come to the sight to remember their relatives from whom war had separated them. Despite the sadness associated with its history, the area has a carnival like atmosphere. For most Koreans, those memories are much more distant that they were in the last century, so to keep the location attracted for the younger generation an amusement park, complete with a Viking ship has been built near the bridge.

The bridge itself was next to a rice patty field. Its blocked entrance was covered in prayer flags, some of them new, many of them faded. It is difficult to imagine how long they will keep being put there. Being ignorant of both Korean and the Hangeul alphabet used to write it, I couldn’t read what they said. But their sentiments were obvious.

The two Koreas are certainly different worlds. Over 60 years of separation has had a dramatic effect. The languages they both share, although still mutually intelligible, have diverged. Even physiologically, South Koreans are taller than North Koreans. In Don Oberdorfer‘s book The Two Koreas he describes how when two North Korean infiltrators were captured and taken to a South Korean hospital “one of the North Koreans was overheard to say to the other that he could never marry a South Korean women—‘they’re too big for us.’” So if the two Koreas are not only divided by a border, but also in these other fundamental ways—is there hope for reunification? Or will that 250 kilometer long border which now feels like an anachronistic remnant of the Cold War, destined to fade as others like it have, become just a border like any other, dividing its people not only politically, but also in a more fundamental way? 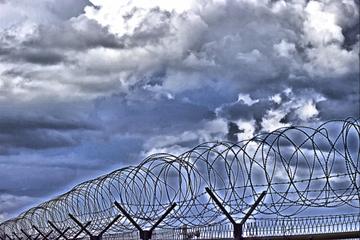 Korean Travel Guide
Travel Tips
What you should know:

About the author:
Devan Hawkins is a freelance writer from Massachusetts. He has had travel writing published on TravelMag.com and writing about other topics in the Islamic Monthly, Antipode, and Radical Philosophy.