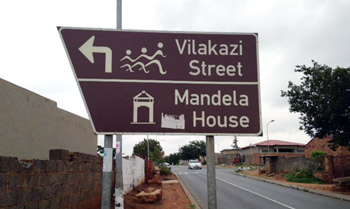 This is one of South Africa’s most famous streets – the only one in the world to have housed two Nobel Prize winners (Nelson Mandela and Desmond Tutu) – and it has long been a must-see tourist attraction.

Every tour to Soweto – Africa’s biggest township – stops at Vilakazi Street. There is a famous reason why.

First Vilakazi Street and it is not your typical ordinary street. The Vilakazi Street precinct is now a fully visitor-friendly location, with public art, museums, daily carnivals memorials and benches all picking out its historical sites. Following a major makeover in 2014, visitors to South Africa’s most famous street can now experience it as a place to stroll, to sit on one of numerous concrete benches or seats, to enjoy the newly planted trees, and to admire the new artworks. “The development vision for the future of Vilakazi Street is to make it a thriving destination based on its anti-apartheid struggle history, township heritage, vibrant spirit and distinctive ‘sense of place,'” Trinity Session, the agency that worked with the local community to help create the artworks, said in a recent statement. 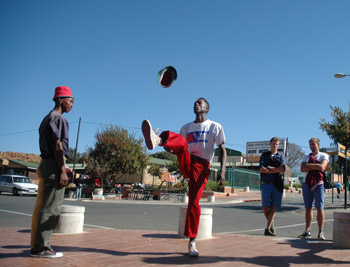 The project was overseen by the South Africa Development Agency. “The community is very happy with the result,” says Thanduxolo Ntoyi, an assistant development manager at the agency. The community was “very involved” with the street and its transformation from the beginning.

The heart of Vilakazi street is its precinct. The Vilakazi Street precinct is about one kilometre long, and built in the shape of a triangle. In its boundaries are the original, unimaginative apartheid-era rectangular houses, next to homes that have been renovated, with the uniform tall walls characteristic of South Africa’s posh suburbs.

At number 8115 is the street’s main attraction – Mandela House, now a museum. The simple three-bedroom home has been restored to what it looked like in 1946, when Nelson Mandela – Nobel Prize winner and anti apartheid hero – moved in with his first wife, Evelyn Mase. In 1958, he brought his second wife, Winnie, to live in the house with him. He returned briefly to live in the house on his release from prison in February 1990. 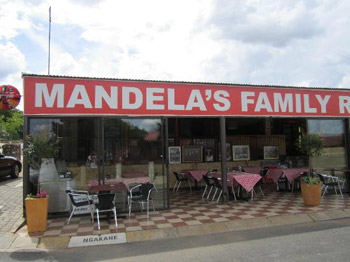 Outside the house stands a large metal outline of two bull heads, entitled The Nobel Laureates. The title refers to the fact that on the corner of Vilakazi and Ngakane Streets, a short distance away, is the Soweto home of the Anglican Archbishop Emeritus Desmond Tutu, who, like Mandela, was the recipient of a Nobel Peace Prize. The bulls look down the road, decisive and eye-catching, leaving no doubt as to the strength of the two personalities they represent. Around the corner in Moema Street is another metal depiction, this time of schoolchildren facing a policeman with a growling dog. It’s a reference to the confrontation on 16 June 1976 when hundreds of black school children were protesting the imposition of European Afrikaans in schools, when they were met by the brutality of the colonial police.

At this point the police opened fire, and the student leader Hector Pieterson was shot and killed. Iconic photographs of the dying Pieterson being carried to the nearby Phefeni Clinic by Mbuyisa Makhubo went around the world. This jolted the United Nations and many countries around the world to impose trade and financial embargoes on the apartheid against the South African government. That day is remembered for its brutality against schoolchildren, and the start of the meltdown of apartheid. Pieterson, the other children and the subsequent riots are remembered in the Hector Pieterson Memorial and Museum two blocks down Moema Street, on the corner with Khumalo Street. Today this museum is a work full of energy and defiance; the silhouetted figures in metal piping showing raised fists and wide mouths shouting at the policeman restraining his dog. On the corner of Moema and Vilakazi streets is a memorial wall in slate, now a quiet place to sit and contemplate the events of all those years ago, when the country exploded in anger and revolt.

At the start of Vilakazi Street, where it intersects with Khumalo Street, is another magnificent artwork. Eight huge, grey hands spell “Vilakazi” in sign language. The hands are big and bold, but accessible to residents – they have become play objects, with children taking time out to climb on them. Other art includes two murals – one depicts the scene of June 1976, with police and their vans, and placard-carrying schoolchildren. And then there are the mosaics, livening up several concrete benches on the corner of Moema Street; down Vilakazi Street are mosaic strips of paving. On the corner of Vilakazi and Ngakane streets is a row of bollards with decorative wooden heads. Vilakazi Street is indeed a different place. 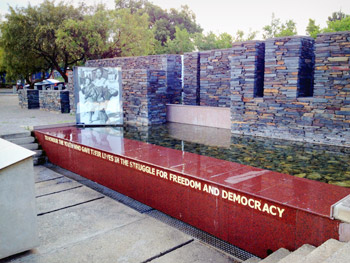 This is another landmark that enriches Vilakazi Street. This memorial has been completed, and it remembers the 15-year-old boy who was the first to be shot on 16 June 1976 riots against the white apartheid government. On the corner of Klipspruit Valley and Khumalo roads is a bridge where Hastings Ndlovu was shot by the police. He was rushed to Chris Hani Baragwanath Hospital – one of the world’s biggest hospitals- where he died of the head wound.

On the bridge there is a statue of the young Hastings, dressed in school uniform and standing on a plinth, smiling and holding his arm up. Storyboards line each side of the bridge, on the sides of a new steel and concrete structure, with seating, inviting visitors to walk down and take in the quiet memorial next to the busy intersection.

Vilakazi for all its glamour is a tourist magnet today. “15,200 foreign visitors came to see this street in 2014 alone. 45% of them came from North America. Most were interested in seeing Nelson Mandela’s original house” says Bat Moloi – the chief marketing officer for Johannesburg Town Municipality.

So, take a drive out to Soweto township, park your car opposite the hands, and stroll up Vilakazi Street, reading the storyboards along the way. And when you’re done, grab something to drink or a meal at Sakumzi, opposite Mandela House, or at the top of the hill at Nambitha. And then drive your car to another parking area on the corner of Moema and Khumalo streets, and cross the road. Take in the messages of the Hector Pieterson Memorial; then walk around the museum next door. Feel the anger, the hatred for the apartheid government, the alienation of young people. Dodge the bullets with them, through the graphic images on display; empathise with the parents who lost their children on 16 June 1976. It’s all part of the Vilakazi Street. 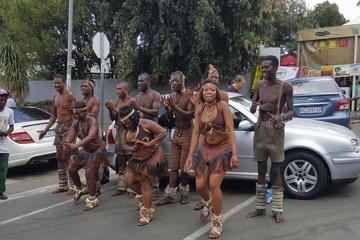 How to Get There:

All major world airlines fly to Johannesburg every day. From there you can take a taxi to Soweto township – Africa’s biggest township. There Vilakazi Street looms in the middle of the township. (www.sa-venues.com/attractionsga/vilakazi-street.htm)

What to do there:

Street barbecue, rock in roll festivals, street race courses and a famous wine taste festival awaits you in Soweto township. It’s advisable to tour Vilakazi street during the daylight as pick pockets can take advantage of the darkness.(www.tripadvisor.co.za/Attractions-g312587-Activities-Soweto_Greater_Johannesburg_Gauteng.html)

About the author:
Ray Mwareya is a news correspondent for the Global South Development Magazine.

All photos are by Ray Mwareya.